I go to Hai Ky Mi Gia / Hai Ky Noodles every so often for lunch so I figured I should start a thread about it. It’s on a corner of Larkin and Ellis in the Tenderloin in a particularly noodle rich section of the neighborhood. Within a few feet are the original Turtle Tower, Pak Nam, Zen Yai, and Ha Nam Ninh. HKMG serves mainly Teochew style noodle soups.

Some recent bowls I’ve had here:

#7(?) Mee Pok
Not officially on the menu, but I think this may be the #7 House Special Noodle Soup with thick noodles, but with the soup on the side. The soup was clear and I believe a pork broth, slurped some of that between bites. The noodles were topped with ground pork, shrimp, fish cake, sliced pork, sliced duck, chicken, fried garlic, and a scattering of cilantro. The mee pok refers to the wide egg noodles in this dish. I liked this a lot. Very al dente wide egg noodles. There was a layer of fat or oil on the bottom of the bowl that gave a nice rich mouthfeel, be sure to mix in some of that with each bite. 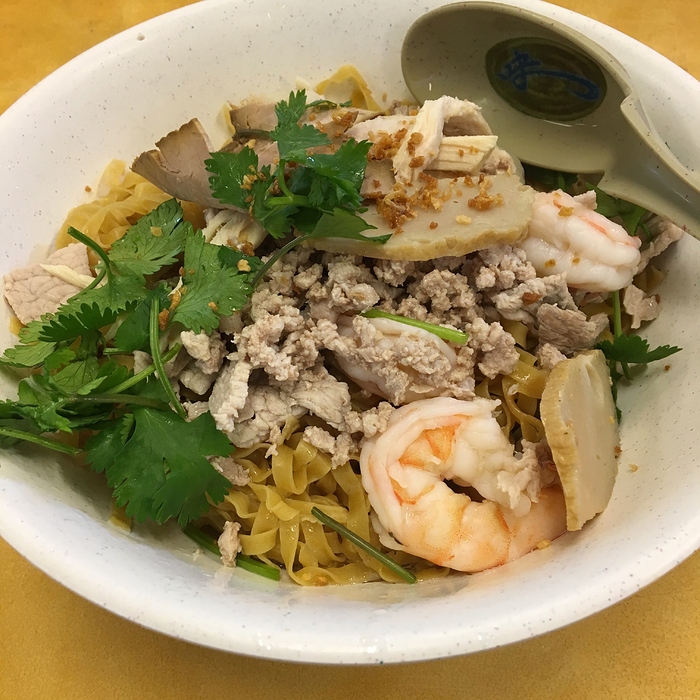 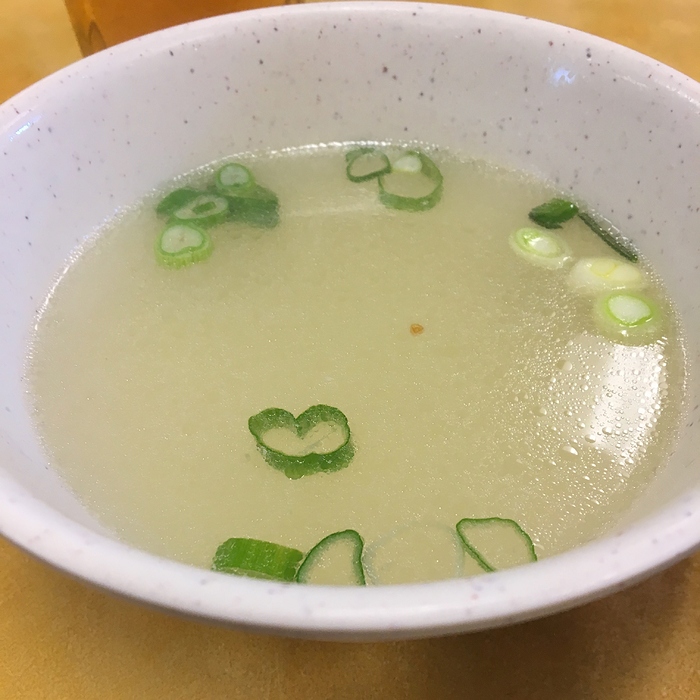 #20 Beef Stew Rice Noodle Soup
Similar to a Cantonese beef stew noodle soup with ho fun (wide rice noodles), but with a Teochew touch. When I ordered this I was asked if I ate tendon (I said yes of course), so I guess if you don’t like beef tendon you can get it with only meat. I will admit to getting this dish without tendon when I was young. It came with a good helping of beef stew and tendon, which was a little firmer than I prefer. The broth is a little different than the typical Cantonese beef stew noodle soup as it is red tinged (I think from a little tomato?) and has lettuce in it for a change of texture. Slightly thickened as well. Not very spicy and could have been more flavorful. 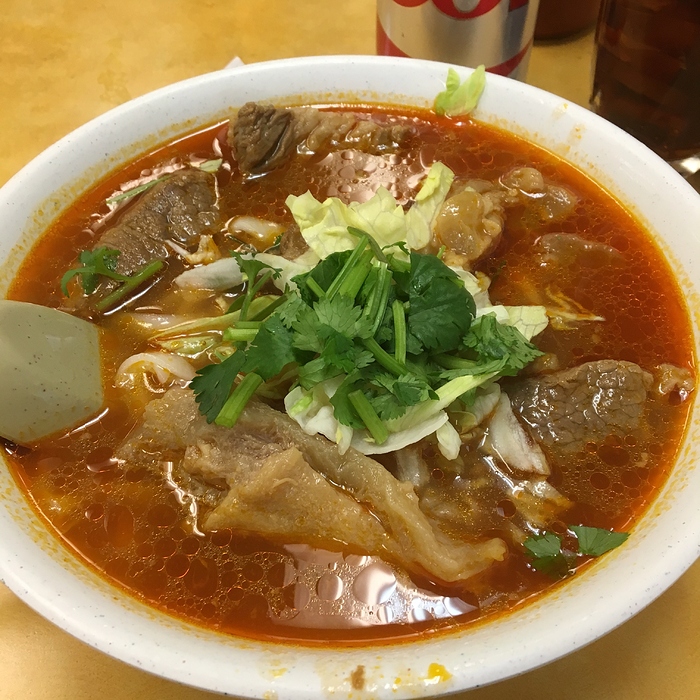 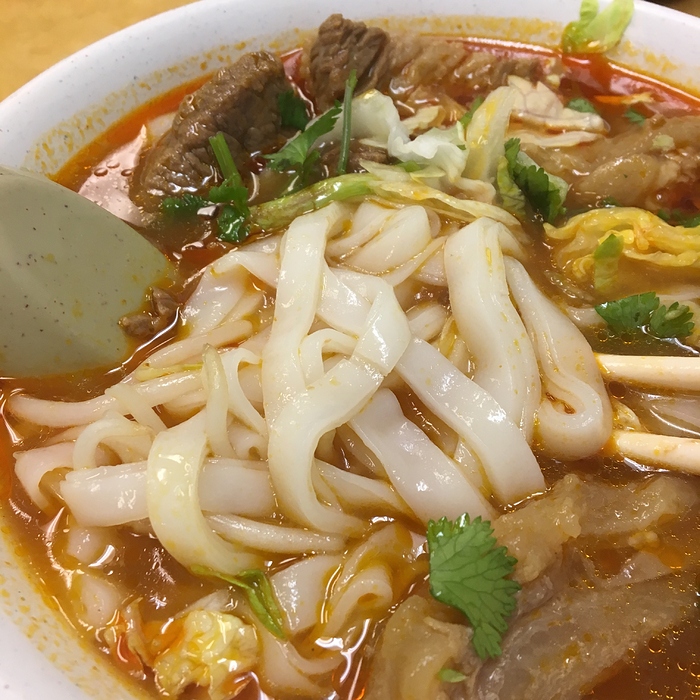 #4 Duck Leg Noodle Soup with Wontons
I ordered this with the soup on the side, and with the wide egg noodles. Like in the mee pok, the noodles were very al dente. It was topped with a whole braised skin-on duck leg, which had very tender duck meat that was falling off the bone. I dipped some of the duck pieces into a mix of sriracha (they have both Huy Fong and Shark brand) and hoisin I mixed on the side. The smallish pork-stuffed wontons were fine and provided a nice change of texture. Very good bowl. It came with a small side of pickled cucumbers and carrots. 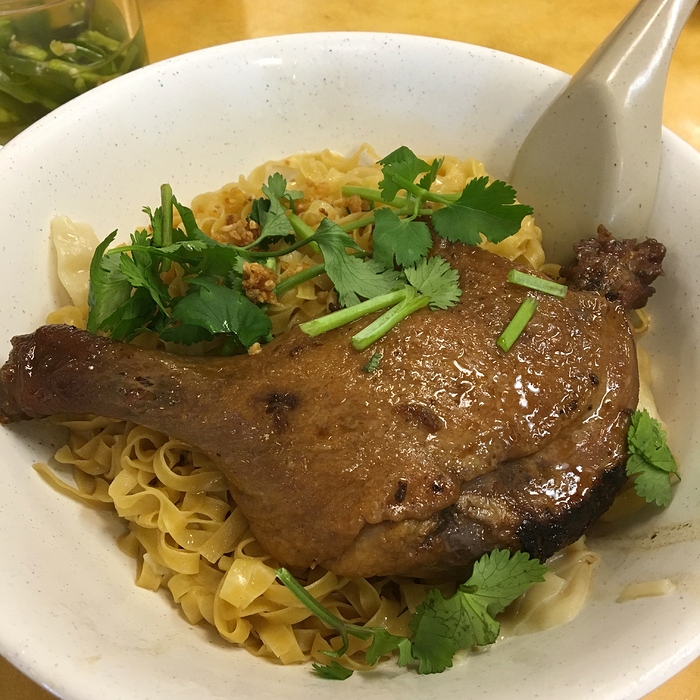 Cash only. HKMG is one of the few places I know of in SF that serves this style of Teochew noodle soups (along with Thai Nghiep Ky Mi Gia in the Outer Sunset which I haven’t tried). Does anyone know of any others? There is also Vien Huong in Oakland Chinatown that I like, but I don’t know of anywhere else in SF proper. 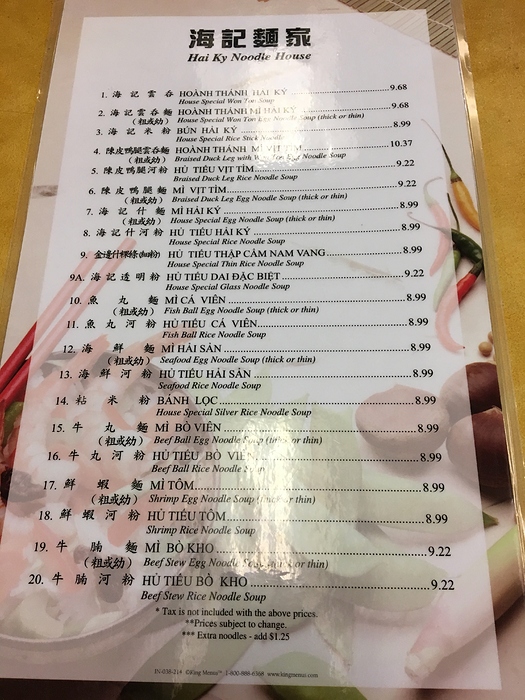 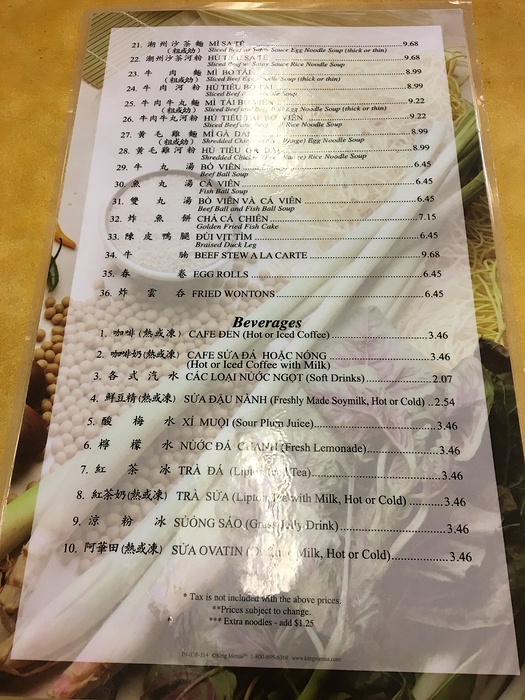 Ordering “Mee Pok” is a quick way to order #7 dry with wide noodles. Homesick Singaporean customers order it that way and the owners took note, so it stuck.

Every noodle can be customized to some extent: with soup or broth on the side (lo mein), thin or wide egg noodles, and you can even mix them up e.g. thin egg noodles with rice noodles for texture. The sub par chain Tung Kee noodle (all over the South Bay) offer that combo as well.

Thai Nghiep Ky Mi Gia is run by a former employee / kitchen worker of Hai Ky, hence the similar menus. TNK for me is far superior as the flavors are more nuanced and they use significantly less MSG.

The beef stew noodle is a variant of Vietnamese Mi Bo Kho (beef stew). The one at TNK is great but sometimes the broth can be a bit heavy with a little grease on top (but gives a nice aroma). You can also order it entirely with just tendons and if you get broth on the side you can adjust the flavoring to your liking (and degree of moisture and al-dente of the noodles).

Thanks for the info! Will have to try Thai Nghiep Ky Mi Gia sometime.

The sub par chain Tung Kee noodle (all over the South Bay) offer that combo as well.

I once had a noodle bowl at the Mt View branch, and it was really bad. The passage of time hasn’t temped me back.

The daughters of the owners of Le Soleil in the Outer Richmond have been doing Tuesday lunch soup pop-ups, which they list on their Facebook page https://www.facebook.com/lesoleilsf/ An acquaintance knowledgeable about Teochew/Vietnamese food spoke favorably of their Teochew dry noodles and other dishes.

I like Vien Huong as well. Here’s a pic of their wonton noodles, with pork slices instead of chicken, from last week. House made fish balls rock. They don’t have duck in the bowl like the HKMG, but they have kidney and it was cooked perfectly. An enormous amount of food for breakfast. 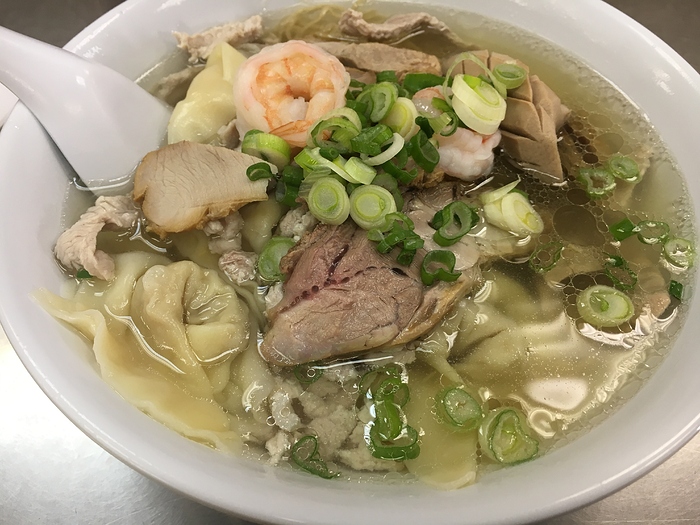 Lam Hoa Thuan and San Sun in SF are listed as Teochew Vietnamese in the regional Chinese list. I only see “Trieu chau” noodles under the fried noodle section for LHT, but the preserved orange duck soup noodles might be Teochew. @KK, do you whether their duck is braised or roasted? (Teochow Noodle Shack uses Cantonese roast duck; Vien Huong braises it).

Never been to San Sun, and I’ve only had Lam Hoa Thuan’s roast duck and a few random dishes that ranged between average to just ok, but nothing that stuck in memory (other than the roast duck and char siu).

Cooking Papa and Fat Wong have “Chiu Chow” style fish ball noodle soup, but that’s more in line with sub average Hong Kong style fish ball ho fun, and it’s not even close, but at least it’s a fix and a reminder of Hong Kong just a little. Cooking Papa’s marinated duck and duck wings and tofu are at the very least decent, but lack the resemblance and marinade nuance of Hong Kong, though once in a while not bad for a fix.

The way I see it, the Vietnamese Chinese marinated duck leg recipe is heavier on the savory (from the soy sauce), a bit imbalanced on the herbs, and in the case of HK and TNK, tilting the balance in favor of the dried orange peel, where HK many times in the past the duck leg was overly marinated too long and resulted in very salty profiles (which doesn’t help when you get the MSG hit from their broth). TNK’s duck leg is less salty but is still savory and dried orange peel forward. Trieu Chau in Santa Ana (Orange County) also does a respectable version that’s very different but delicious in its own right. This is not to be compared to marinated goose in Hong Kong which is an entirely different beast and flavor altogether.

HK style Chiu Chow marinade is a blend of many different herbs and spices, ranging from liquorice, soy sauce (primary seasoning), a root similar to ginger called 草果, huoqiao/peppercorn, star anise, Chinese cinnamon, and dried orange peel, ginger, ginger powder, rock sugar, scallion and quite possibly a bunch of others. This master stock for marinade is akin to the sea eel stock serious sushi restaurants use to reduce down (and continue to add to) to make the thickened sauce/tsume to brush on top of sea eel sushi, although very different applications and textures.

The Cantonese master stock marinade flavors are far more nuanced compared to the Vietnamese Chinese marinated duck leg style, but we’re comparing apples to oranges in the end after some branching out. Hakka Taiwanese “Lu Wei” would utilize similar combos of varying ratios (yet the profile comes out different) for the marinade for simmering/braising, and yet satisfying in separate ways.

I didn’t realize so much went into the HK style Chiu Chow marinade.

In the local Vietnamese Teochew Versions, I’ve been able to pick up star anise and sometimes the orange peel, but not the smokiness of 草果 (black cardamom). Incidentally, Vien Huong uses the same braising liquid for the off menu pork slices as they do the duck. For all their soups they add MSG in a slurry per order, so you can request that it not be added.

The closest place I can think of in California is Seafood Palace in Monterey Park (which goes by the Chinese name of Typhoon Shelter 避風塘) for a truer taste of Cantonese style Chiu Chow, surprisingly far more comprehensive in terms of offerings than Northern Cailfornia.

The master stock marinade is more nuanced and closer to HK Chiu Chow style. They do quite a few things with it (duck, pork likely belly, pork intestines, tofu, cuttlefish, and duck tongues). They also offer the true HK Chiu Chow congee, taro paste desserts (one with ginko nut that’s very good, and steamed crystal skin buns with taro) and maybe some Cantonese Chiu Chow inspired type random dishes (typically found in HK neighborhood Chiu Chow restaurants). And can probably do the cold crab…but it’s not going to be the same because California crab does not do that dish justice. Their satay beef with greens stir fry is a touch greasier but hits the spot (also common in HK Chiu Chow restaurants). Unfortunately a lot of people who aren’t in the know go their for salt pepper crab and make that their signature/popular dish which is a disservice to the restaurant.

Cooking Papa’s marinated duck and duck wings and tofu are at the very least decent, but lack the resemblance and marinade nuance of Hong Kong, though once in a while not bad for a fix.

I just took a small bottle of Hung’s marinade that came with half order of their goose from Hong Kong. I haven’t decided what I am going to do with it yet, since its too little to actually marinate anything. Probably for dipping. But yes I intend to milk that marinade for as long as I can.

I don’t order Chiu Chow marinated items here in the Bay Area often. But the ones I got I found them to lack nuance and complexity as well, including from Chiu Chow specialist like Teo. The soy sauce component is usually much more prominent.

Hit the spot on a cold (but dry for a change) Monday afternoon. 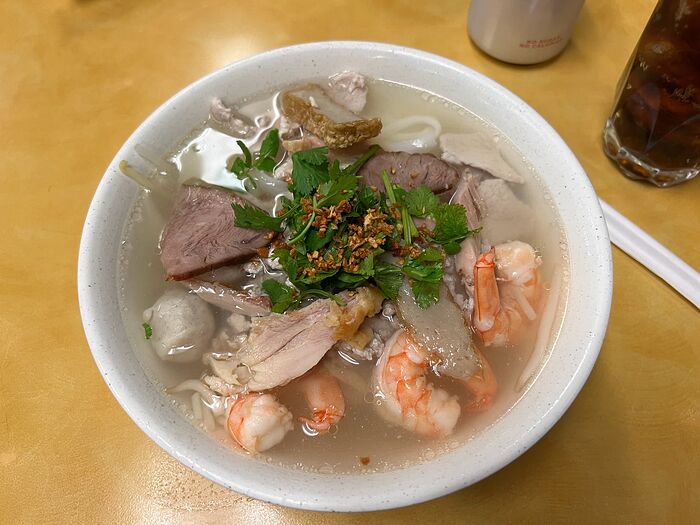 We go every month or so when we’re home. I usually get the duck leg, dry with the wide noodles or in a soup with the skinny or a mix of noodles. My gf usually gets some kind of noodle soup. Always good. 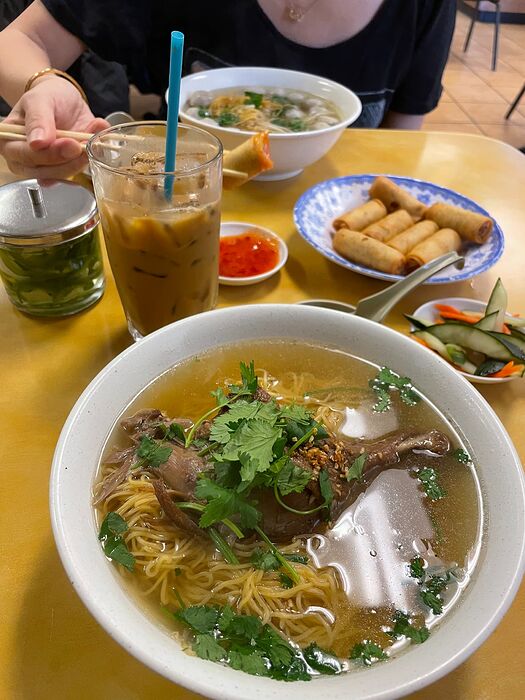 Glad to see this place get some attention. I was quite a regular for many years starting about 15 years ago. I find myself unfortunately less excited about going down to the tenderloin for food these days. Thai Nghiep Ky Mi Gia on Noriega is extremely similar in flavor/menu. I still don’t understand their connection. But I miss the ladies at Hai Ky. They have always been so nice to me.
Duck Leg every time for me. Sa te every time for the wife. Grass jelly or soy milk optional.