I almost forgot this longtime standby. I have been going to Gene’s since he was in Chelmsford in the middle of nowhere. Now one of his locations is in Woburn and he’s open six days a week again. If you are looking for beef and broccoli, Gene’s Chinese Flatbread Cafe is not the place for you. If you are looking for food from Xian, you are in the right place. Hand-pulled noodles, savory lamb skewers, and hot and sour soups are the good stuff here. I love the food here, not so much the crappy spoons and minuscule napkins. They only have 18 items on the menu and that includes 2 that involves pork intestine that I have passed on. The #16 Hot Sour Hand-pulled Noodles Soup ($8.40) is a favorite of mine. Excellent hand-pulled noodles in an outstanding broth. Of course I managed to get soup all over myself. Other things I like here is the #10 Hot Sour Dumpling Soup that is chockful of delicious dumplings. #9 Cumin Lamb with hand-pulled Noodles. #4 Handpulled Noodles is just noodles in chili oil with a heap of garlic on top but so delicious. 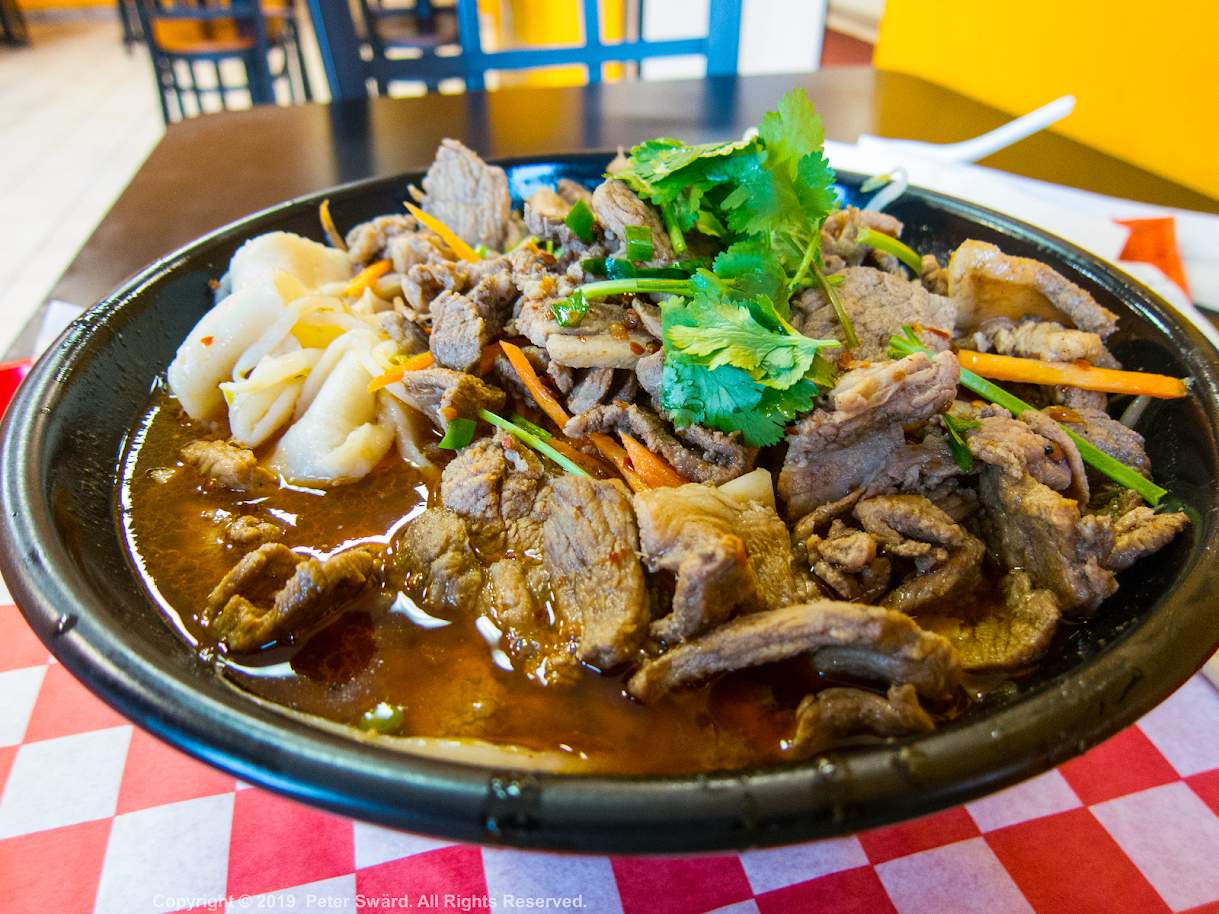 And the photo is of…?

Thanks for the reminder. In my Regional Chinese Cooking in Greater Boston Google map, I had put down the Woburn location, so I knew about it at some point (probably the web site), but promptly forgot about it again. Won’t make that mistake again the next time I’m in the area. The repertoire is limited, but execution is masterful (you just have to want this style of cooking is all).

This is indeed a spectacular soup.

I got one from the DTX branch on Monday and it made a fantastic meal on Amtrak. The soup had – to my palate – a perfect balance between the hot and the sour (my fumbling fingers initially typed “dour”, and it occurred to me that some clever cook should invent a “hot and dour” soup), yet an underlying complexity. The pork was (as your picture suggests) nicely balanced between fat and lean. The sprouts and slivered carrots added a beautifully counterpointing crunch.

It made my evening – even more so when fat beeswaxperson after another glanced at the empty seat next to me, then at the soup, and moved elsewhere.

[I’m referring to #16, the soup pictured at the top of this thread.]

Good news! Gene posted on FB that the Woburn location is now open again, for takeout only. You can get delivery via UberEats, GrubHub, etc.

Only online or phone ordering. No walk-in ordering.

sigh I would kill for some of his hand-pulled noodles now. KILL!! But I’m no where near there, and no car.

Well, maybe YOU can. It’s weird. Late last night, I used the UberEats app on my phone to look at the current menu. This afternoon, was going to order but Gene’s was no longer listed on this app. Nor on Grubhub or DoorDash. I called the Woburn location. The woman who answered said their listing shows up on HER cell phone’s UberEats app, and suggested I lived too far away. But I’m only about 10 miles north of the Woburn location, and other restaurants further away than that do appear on mu UberEats. Boo-hoo!

I’ve had this happen on Caviar, where I can get food delivered from any of the places in Union Sq or Davis Sq. that are available but Highland Kitchen is not listed even though they’re less than a mile from me in Medford. I don’t really understand why this is the case, but the area algorithm doesn’t seem to be straightforward somehow.

The Westford location reopens, for pre-order takeout only, on Thursday 5/14! It’s farther from me than Woburn but MAYBE the delivery services, with their weird concepts of delivery areas, will include me.

So…on Tuesday, Gene’s reappeared on my UberEats app, but was listed as currently unavailable, whatever that means. Not the same as closed, which appeared on some other restaurant listings. Today - mirabile dictu! - it was open, I ordered, and just had my first #4 in a couple of years. #10 will be dinner today and tomorrow. A one-sheet paper menu was included in the bag. It includes mention of delivery via GrubHub, DoorDash, and UberEats, so I assume it was newly-printed. I mention his because it includes the Boston location. Westford is only open Thursday through Sunday.

Westford is only open Thursday through Sunday.

Glad you got your Gene’s delivery!

Thursday though Sunday days of operation were in effect in Westford for awhile. We’ll probably try next week, as people missing their Gene’s favorites in Westford are probably hitting up the place with gusto.

My youngest and I stopped in Woburn today, on our way home from H-Mart in Burlington (posted elsewhere).
Feeding 3 for lunch we ordered the lamb with hand pulled noodles, lamb flatbread, 1 skewer of grilled lamb and the house noodle soup. Easy on line ordering which let you pick the spicy level, parking was across from the store and the order was ready when we arrived. It was our first time (not the last though) and it was great. I really really liked the lamb with noodles, nice heat great broth and those noodles are exactly what I conjure up in my head when I think of hand pulled. The sandwich was very oily but had great taste. Onions nicely cooked as was the lamb. Felt like it needed something fresh? Cilantro or something? But we ate it. I think the house noodle soup was well received, I could not get my spoon near it. The lamb skewer was well seasoned (I did get a bite) and DS would probably order the 10 ct next time.
Hot & Sour Dumpling soup next for me, has anyone tried the sour spicy shredded potato side?
Can’t believe we waited this long!

You REALLY MUST try the #10, hot and sour soup with housemade pork dumplings. There are a dozen or so generous dumplings - it’s enough food for two meals. I like to get the flatbread sandwiches as takeout, adding fresh sliced cucumber jarred red bell pepper at home.

It’s one of my favorites. Both the dumplings and the soup are excellent.

That’s the one I’m eyeing for my next trip. Sounds really good. We make a Thai cucumber salad that would be a great addition to the sandwich. Fresh cukes would work too. I thought maybe some cilantro but that’s not one of my favorites. I will just have to get 2 and experiment.

What’s the recipe for the cucumber salad?

It started as the Thai recipe from an older NYT cookbook. But DH has streamlined it.

6 tablespoons white vinegar and sugar, 3/4 cup water, salt and pepper in a pot. Simmer till the sugar dissolves. Pour over a peeled sliced cucumber, red onions and jalapeno peppers (optional if you don’t like the heat). Let sit till cool. Thats it, simple but really good, especially during the summer over glass noodles, shredded carrots and grilled pork or chicken or shrimp, a few peanuts.