I took some photos today of my Sabatiers, since I have recently treated or re-treated their handles. After taking these pics, I couldn’t resist the urge to post about them.

These are all new old stock K Sabs from the 50s-70s as stated on their site and bought directly from K Sabatier.

Each of the handles, except the 11 inch nogent which was great out of the box, I have sanded to a nice and smooth 1k grit. All have been treated with pure tung oil, no thinners. It seem to have worked well for me.

I think there is great character in these and I also like how they perform :). Not all knives need to be super thin behind the edge and made with a hard Japanese steel. Though the smaller nogents and the canadian slicer actually are quite thin indeed. I would like to own some actual vintage also, but I am quite happy with these and like that these are unused.

Adding some out of the box pictures for reference also and hope some of you would share pictures and experiences of your Sabs as well. Perhaps your thoughts or questions etc if you don’t own any. 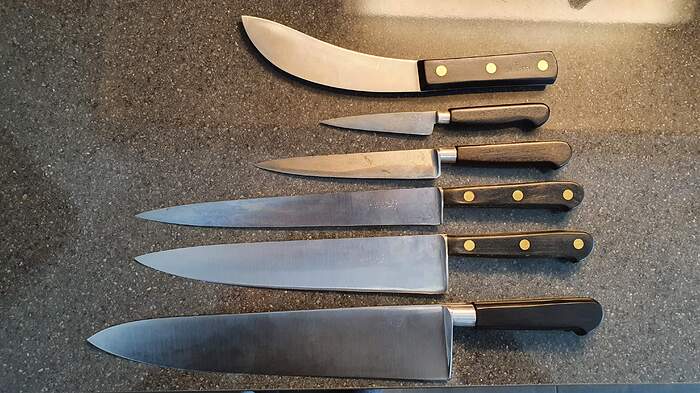 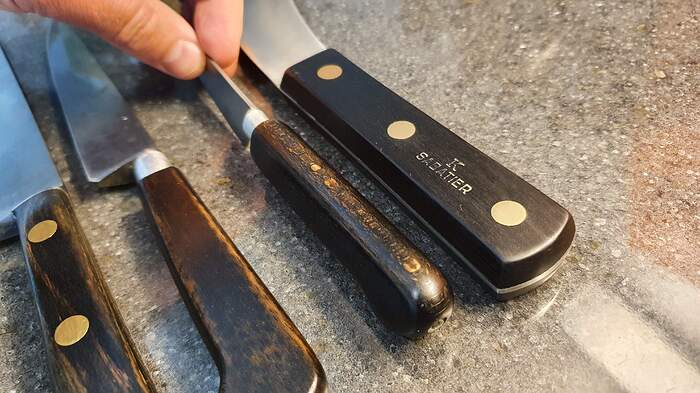 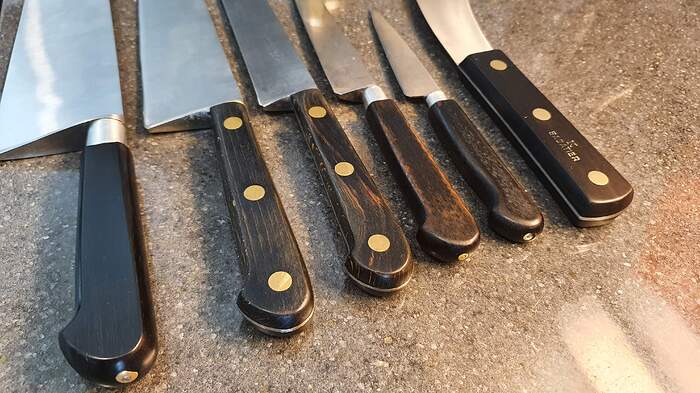 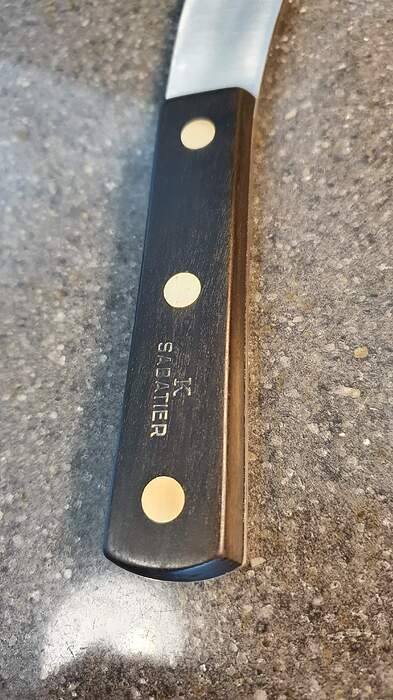 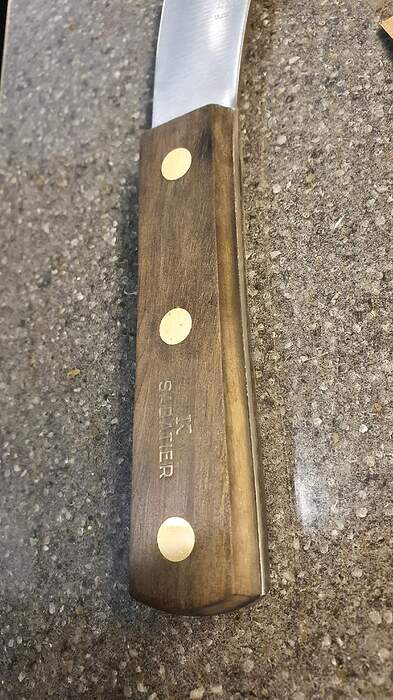 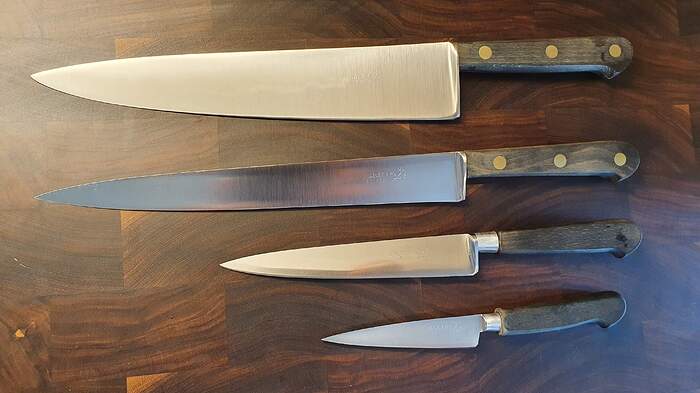 I checked their site now and noticed they have actually stocked more of these NOS knives after my recent purchase of the 11 inch nogent and the stainless skinning knife. There are for example chefs and filets up to a huge 14 inch in carbon, as well as the very nice 4 inch nogent carbon paring.

Also some stainless stuff like a monster 12 inch heavy abbatre chef is there now. So a timely post ;). My knife drawer blocks are full to be honest, but still the 8 inch nogent chef and the 10 inch with a plastic handle as I don’t have one with plastic are tempting to me.

Gorgeous knives! That curved one is fascinating. What do you use it for? I love carbon steel Sabs. I have ten inch chef from the sixties. Also ten inch slicer, an eight inch chef, a six inch petty, a four inch parer/petty, a boning knife, and two little Nogent parers, all from the eighties. My one stainless item is a heavy cleaver. Frankly the cleaver was a bad idea. I don’t hack bones, and the big chef is way better for large tasks. The boning knife is cute and fun, but for lots of boning tasks the Nogents are superb. I also have an old Sab steel. All of my knives have been sharpened on water stones over the years and now have angles more typical of Japanese knives. They seem fine with the sharper edges since they are steeled lightly regularly. I am mulling an F. Dick polished steel.

The curved one is the skinning knife I just recently got. I’m still giving it some time for the tung to dry as that handle was pretty dry when I got it. I had no special use cases for the skninning knife in mind when I bought it, it just happened to cought my eye as its an intresting shape. I really wanted the 11 carbon Nogent I got at the same time and havent really used that one yet either, but its ready for action now. Didnt have much of a neeed to oil it, but I gave it a thin coat anyway.

You have a nice set of Sabs then, any chance of pictures? The cleaver sound exciting as I am a cleaver fan as well, would definitely buy one if the K sab was selling it now in these new old stock.

My 10 inch chef is a stainless Canadian and its quite sturdy strong knife. The 11 inch nogent seems thinner behind the edge, but it is also a strong knife, I think it has the potential to become my favorite general use knife even. The smaller nogents and canadian slicer are thinner then yet.

These knives have been sharpened on Japanese water stones. I have the F Dick polish as mentioned in the other thread, but ashamed to repeat I haven’t really used it. I am in the process of starting to utilize it though with the Sabs especially and I did notice an improvement after using it today (duh, this is what its for) :). I like the idea of doing the actual abrasion with the water stones and using this to keep the edge aligned.

Saw the picture where I lift the nogent parer. I especially like the grain on that one, it has a nice, kind of spiderback pattern on top that I like seeing when I open my drawer

Good to see you pursuing your most recent passion. In my own American upbringing–even with an aunt who was a French instructor with cooking skills–these knives didn’t score a fusion breakthrough. The bolster free knives we used came from places like Chicago cutlery. The most successful European marketer was Victorinox, because they first were a supplier OEM before they bought the American company. The stamped knives with plastic handles that they’ve marketed here are their fusion solution–but not mine.

Even when Julia Childs brought French cooking to prominence here, she did the French knife manufacturers no favors. I stuck with an inexpensive wood handle bolster free American butcher knife all the way to the present–using it less and less.

One of the things I like best about your newest collection is the commitment to wooden handles that you restored.

Nice to hear you have been exposed to French cooking :).

The Victorinox are pretty well known and used here in Finland as well. I have a few of their plastic handled tomato knives, but not anything else. The tomato knives keep going and going with no fuss and I have no issues cutting against a porcelain plate with them if I want.

This series is probably the closest to the fusion you like to talk about in K Sabs lineup:

The wood handles are nice indeed and taking care of them is fun to me. I’m not any big proponent of full bolsters, but I have absolutely no issues with them either. I will just remove as little material as necessary from the edges, just like with my Japanese knives, and expect not needing to do anything related to the bolsters any time soon. 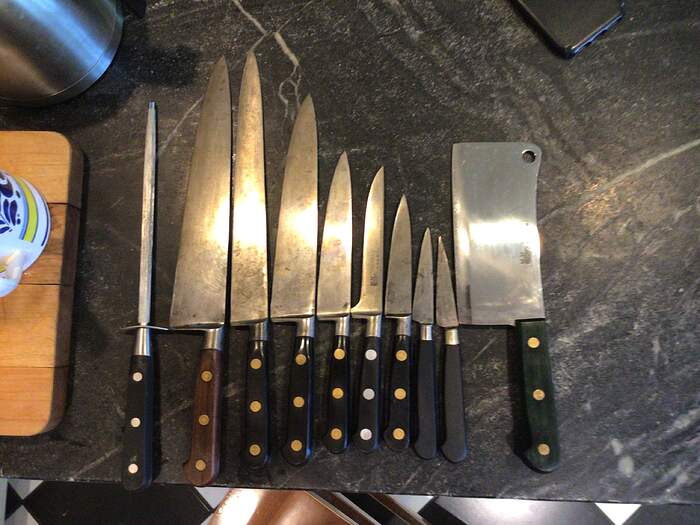 The boning knife is new. The larger chef’s knife gets about 90% of the action, followed by an Au Sabot bread knife and the smaller Nogent parer.

Even now, Sabatier recommends sharpening with the steel:

How do you resharp a K Sabatier Knife with a sharpening steel ?

When did you start using whetstones?

I am also thinking on adding a smaller boning or butcher knife. I have never had a boning knife, so I am not sure about it, but your looks very good.

Right now I’m tipping towards this 14 cm butcher. I think it would make a good knife for breaking down poultry and small fish as well as going through some short ribs. 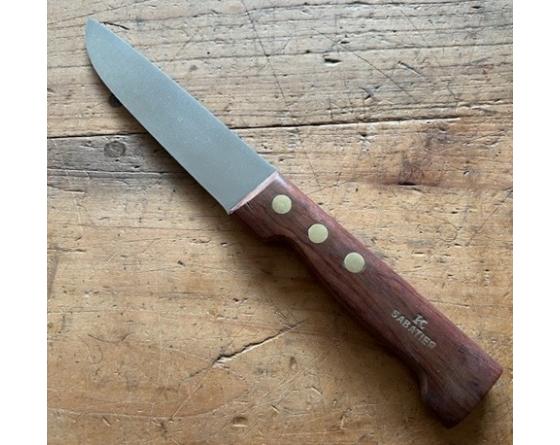 But this is also an option 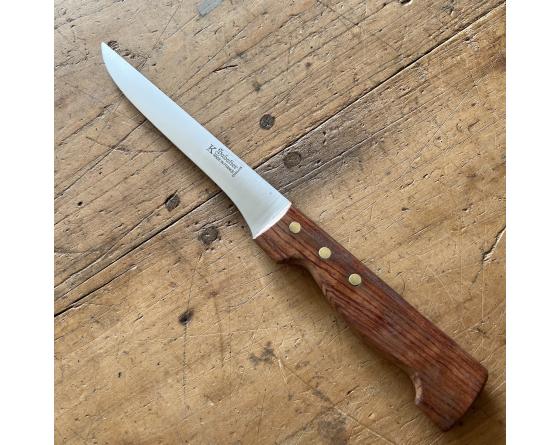 It says “old forge” in the description of this plastic handled chef. I wonder why they have added that to it and not others.

Your cleaver looks mighty powerful and I fancy the small chefs too, it’ a 16cm / 6 inch right? Well, I fancy them all.

I note that some non full bolster stuff was also made times ago. Maybe there is more charm in the bolstered ones though. 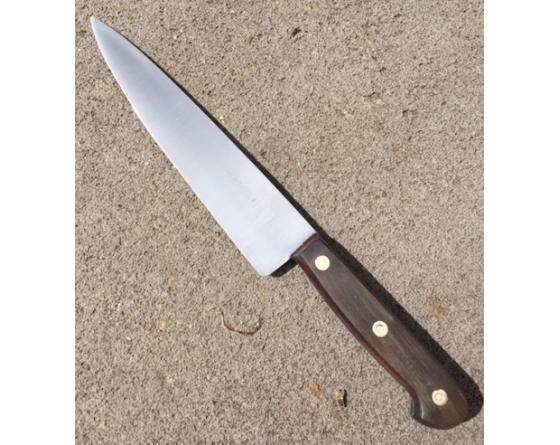 Yes, it is a 6". I use it for avocados and not much more, but my wife uses it and the 8" a lot. As I transition away from Japanese knives the 6" may get more use. It is about the same length as a nakiri. It may not be as tall, but I can work around that. It is nice for my towels to be spared by the bolster!

As you seem to be fine with knives that have no bolsters, maybe a small deba. Nothing dispatches a fish better (removing head and tail and filleting).

I note that the choil has been rounded. Nice.

The knives I consider to be fusion mostly have half bolsters–some design oriented knives have 1/4 bolsters: with them, one’s fingers can slide to the balance point or to a pinch grip.

I have a heavy 180mm deba already and I like it for the Norwegian salmons especially, those are usually about 2,7 kg here in the supermarket fish counter. It’s not so nice for smaller fish, like taking an axe to them.

So a small deba would be great indeed. I was after a small deba for some time. A thinner ai-deba or ajikiri, but then I let the idea go and decided to keep using our santoku instead as it’s a great deal nicer for some small medium fish for me. I have a 16cm finnish puukko style fish filet also.

Perhaps the butcher I’m considering actually would not be all so great for breaking down poultry, need a bit of heel for that. For fish and other tasks it should be great, though again losing to the deba if the head would be removed.

Your boning looks well made, seems a better sturdier tool than the boning I posted. 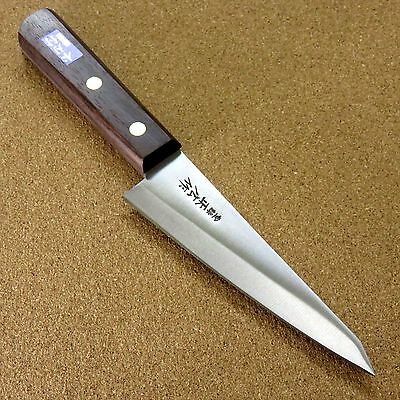 Here is mine with the deba 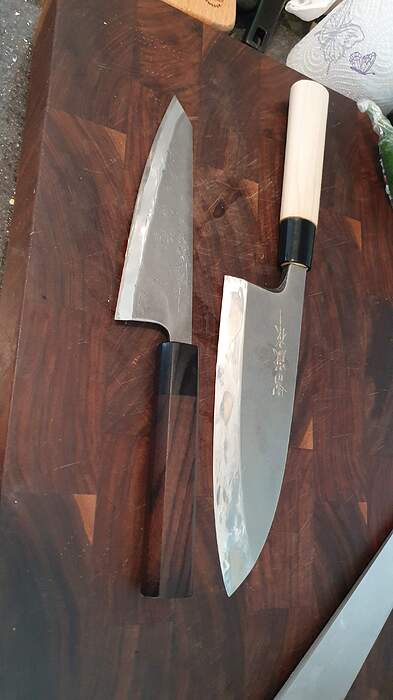 Kind of a k-tip honesuki.