I know it’s not good for me, but this holiday season I had two excellent examples of potatoes au gratin. Now I want to make this at home. I did a quick experiment last week: russet potatoes with cheddar and golden yukons with cream and cheddar. The latter was better, but neither were particularly good.

I still have both the russets and goldens. I bought some nice Vermont cheddar and French Gruyere. Assume I have all of the pantry staples (because I do). Do you have a good gratin recipe I can try? I like the potatoes a little firm, the cheese melty and the topping crunchy.

http://www.chowhound.com/post/argh-hate-potatoes-au-gratin-602424 This long thread from CH, back in the day, should give you many recipes and pointers.

One suggestion is to avoid the part where some recipes tell you to rub the casserole dish with a garlic clove. The time I did that, despite the lengthy oven time, the potatoes were infused with a raw garlic undertone. If you want to taste garlic in this dish, I’d advise sauteeing minced to include in the milk, or sprinkling the raw potato slices with garlic powder.

I got compliments with this Celeriac and Potato Gratin from Stéphane Gaborieau, the Joël Rebuchon show. (it was 10 years ago when he still did daily cooking show on TV)

Serve and enjoy the celeriac and potato gratin with meat, for example venison or with a green salad and a glass of red wine.

I like the potato, leek gratin on Epicurious that calls for par-cooking the potatoes in cream.

It seems many folks don’t realize that the definition of a “gratin” involves baking food that has been topped with buttered bread crumbs. E.g., Pepin makes a tomato gratin which has no sauce or cheese. Gratin can also refer to the shallow baking dish, which is often oval. But I cheat, too - I often use canned fried onion rings sprayed with Pam rather than buttered crumbs.

I made Julia Child’s Gratin Dauphinois over the holidays and it turned out great.

There are as many “authentic” versions of gratin dauphinois as there are of bouillabaisse. Of them all, we prefer this one because it is fast, simple, and savory. It goes with roast or broiled chicken, turkey, and veal. . Although some authorities on le vrai gratin dauphinois would violently disagree, you may omit the cheese. If you do so, add 2 more tablespoons of butter.

For 6 people Preheat oven to 425 degrees.

Peel the potatoes and slice them ⅛ inch thick.
Place in a basin of cold water.
Drain when ready to use.

Rub the baking dish with the cut garlic.
Smear the inside of the dish with 1 tablespoon of the butter.
Drain the potatoes and dry them in a towel.
Spread half of them in the bottom of the dish.
Divide over them half the salt, pepper, cheese, and butter.
Arrange the remaining potatoes over the first layer, and season them.
Spread on the rest of the cheese and divide the butter over it.
Pour on the boiling milk.
Set baking dish over heat and when simmering, set in upper third of preheated oven.
Bake for 20 to 30 minutes or until potatoes are tender, milk has been absorbed, and the top is nicely browned. (As the oven is hot, and the dish shallow, the potatoes cook quickly.)

(*) May wait for half an hour, loosely covered, over simmering water. For a longer wait, stop initial cooking just before all milk has evaporated. Set aside uncovered. Shortly before serving, dot with 2 Tb butter, reheat on top of stove, and set in a 425-degree oven for 5 to 10 minutes to finish cooking.

I replaced the milk with half and half. You could use cream also. I added freshly grated nutmeg on each layer and put a bit of cayenne. I used a mix of Gruyère (I use Gruyère de grotte) Swiss Emmental and Appenzeler for the cheese. It was very well received!

i had this recipe at a surprise 2nd christmas dinner. since the 2nd dinner was only a few hours after the 1st, i could only manage a small square, but it was fabulous. worth splurging on some good parm.

Tortino di patate This dish�which may be the ideal marriage of potatoes and cheese�shows that luxury ingredients like Parmigiano-Reggiano are often at their best when presented in the most straightforward way.

Cheddar isn’t a great cheese for melting - it has a tendency to break and turn into a grainy, oily mess. Replacing the cheddar with gruyere will help a lot. Did you use milk, half and half or cream in your previous attempts? Milk alone will tend to break/curdle - half and half or cream (or a combo) works better. Making sure the potatoes are very evenly sliced will make them cook more evenly. I layer mine in thin layers and pour some cream on each layer to make sure that all of the potatoes get thoroughly coated. I also pre-cook the sliced potatoes in some of the cream - it makes them more flexible and easier to layer tightly in the baking dish.

Not a recipe per se… but I’ve been making it pretty much the same way for 20 years, and there hardly ever any leftovers (I only make it for potlucks or dinner parties as we’re not a very carby household).

Butter a 4 qt. (?) baking dish on both the bottom and sides, then layer 5 lbs. of peeled potatoes (thinner than 1/8") slightly overlapping until you’re done.

Mix up one small container of light cream, a shit ton of fresh crushed garlic, more salt than seems edible & a good pinch of cayenne. I think a little ground rosemary might be nice, too, but the entire seasoning really is a matter of personal taste. I like salt, I like garlic, and I like a bit of a kick. Annnyhoooooos. Pour cream mixture over the potatoes. Cover with one pack of TJ’s quattro formaggio (or gruyere), then add a small layer of grated parm. Add a few thin pats of butter on top of the cheese – I put one in the middle of each quarter of the dish.

Thanks guys! I just printed this thread and will experiment all weekend.

I’ve been using this as my potato/cheese/cream recipe for over 20 years and it’s always really good. The only change I occasionally make is to add some slowly sautéed onion. Oh and the better the Swiss cheese, the better the dish! Spring for some good gruyere or emmental.

Wherever I want a classic I just reach for Julia Child! It might not be as trendy as some other food celebrities but I find it always works for me! I’m french and I can actually read the original classic recipes by Troisgros, Bocuse, Robuchon, Point but I prefer the compromise Child brings between the authenticity of the french approach and the simplicity of home cooking.

Agree on the cheese! I find that if I can get my hand on a good gruyere de grotte I’ll be fine (that goes for gratins and soupe à l’oignons)

You might want to try a combination of yukon gold and russet potatoes - alternate them in rows as you lay them out in the baking dish and season with salt and pepper. Gruyere cheese and cream will give the best flavor, at least the flavor I prefer. Add minced garlic and minced thyme to the shredded gruyere, toss together and spread between layers of potatoes, one third at a time and saving the last third for the top after you’ve poured on a cup or two of cream. Don’t cook the potatotoes in advance, and and don’t soak them in water, but do slice them using the thinnest cutter on the mandoline and assemble and cook the gratin immediately so the potatoes don’t turn grey.

Wow…besides gregarious above mentioning " I often use canned fried onion rings" I don’t see anyone else mentioning onions in their recipes. I don’t follow any particular recipes when I cook, either it’s things I’ve learned or observed over time, or things I have just “winged” at times. I make my au gratin with sauteed onions in with the potatoes and cheese prior to baking.

I completely agree most cheddar does not melt well, leaving an excess of oil in the dish. I always love experimenting with different cheeses, one which I also use in mac-n-cheese because I love the flavor is port wine infused cheese spread. Gives dishes like this a very unique taste and color since when melted/cooked it turns pinkish.

Due to a slightly comic misunderstanding when my kids were young, Au Gratin Potatoes were always known as “Old Rotten Potatoes”. Similarly, Old Blue Jean Salad was a popular dish.

My go-to recipe is from Around My French Table by Dorie Greenspan. It is not fussy, and the results are stunning. This post is really similar, but I infuse the cream with the thyme and the crushed garlic:

Somewhat similar to what most of know as potatoes au gratin, is the french tartiflette, which I quite like.

I made my largest pyrex dish (11x16) for Christmas Eve dinner. It really looked like way too much for the guests (8) but left over scalloped potatoes (what we call them in our family) are always welcome. Anyway, NO left overs!
I don’t use a recipe and often use 2 dif kinds of potatoes to mix it up. Very finely slices, each layer is sprinkled with a couple of tablespoons of minced onion, dotted with butter and sprinkled with about a tablespoon of flour. The little bit of onions keep the potato layers a little bit separate and not too dense after baking. Optional is a couple of tablespoons of grated cheese. Pour a mixture of hot milk/cream/nutmeg/cayenne S&P over the potatoes to just barely cover. Cover with foil, bake low for an hour, uncover raise heat bake another half to one hour. Be sure to use a sheet pan to catch the inevitable bubbling over.

Just watch how the guy casually puts a wheel and a half of reblochon in there. 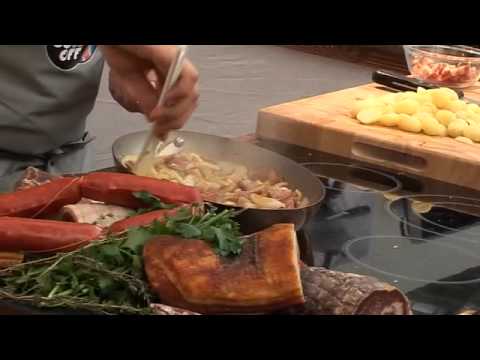