It was $10 a quart and I had to drive an hour to meet the folks from the farm. I liked it, but not enough to justify the time and money.

I drink plant milks and actually like them (oat milk is very good, and Silk now makes one from soy and coconut that even faked out my offspring). I’ve learned a lot of vegan recipes to learn workarounds and I honestly very rarely crave dairy any more.

I drink plant milks and actually like them (oat milk is very good, and Silk now makes one from soy and coconut that even faked out my offspring). I’ve learned a lot of vegan recipes to learn workarounds and I honestly very rarely crave dairy any more.

It’s a pity tone of voice doesn’t carry over to print. I am asking this with curiosity and have no agenda other than learning:

Why do people who are vegan want things to taste like those animal products, like milk, they eschew?

I can’t say I’ve enjoyed the almond, soy or rice milk lattes I’ve purchased. I have stopped ordering oat milk lattes because I realized I wasn’t enjoying them the way I’d enjoy a dairy latte. I’d prefer a lemonade or tea to a non-dairy latte.

If I became allergic to dairy, and couldn’t find Coffeemate, I probably would mostly drink espresso with sugar, and skip the alternative milks.

Why do people who are vegan want things to taste like those animal products, like milk, they eschew?

Assuming your question is not rhetorical, and speaking as a vegetarian (not vegan but trying to cut down more and more), I want to reduce my environmental footprint and involvement in animal cruelty. I still like the taste of dairy products.

I like many plant milks - soy, almond, and pea milk - in my coffee (would rather not drink it than drink it black). I don’t enjoy oat milk. I have yet to find a good commercially made vegan yogurt that is plain, without sugar.

I haven’t drunk raw dairy milk, and appreciate the reasons for pasteurization. I wish that there was non-homogenized milk so that we could get the cream easier.

I know some people swear by freshly made soy milk as opposed to bottle soy milk. Not sure if you have the opportunity to try fresh soy milk to decide. I have tried fresh soy milk but I do not remember much. I think they do taste different though.

I like fresh soy very much. I’d have it for breakfast when in

There was a Chinese shop in St Louis that made fresh soy daily and shipped it around town to restaurants and customers. I’d buy a couple gallons to bring back with me when in town.

I know some people swear by freshly made soy milk as opposed to bottle soy milk.

It is nothing like bottled (or carton-ed) soy milk from the likes of Silk.

And, really, with soy milk, I think “milk” is really a misnomer. It really should be soy nectar.

I haven’t eaten meat in fifty years. I don’t eat mock meat. I never liked meat and didn’t miss it.

Some people give up eating meat despite liking meat very much. The reasons would be animal welfare and their carbon footprint.

These people often enjoy mock meat as they get the flavor they enjoy with no animals dying and less burden on the environment.

It can also be to fit in. An example would be a family barbecue; the vegetarian/vegan can have a veggie burger to be included in the event.

. With all due respect, choosing dairy vs nut milk is often a different issue than choosing meat vs fake meat. 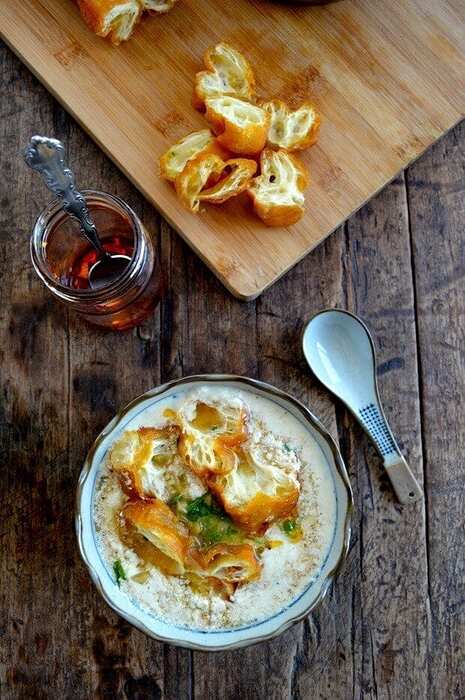 Dou Jiang You Tiao, is a popular breakfast/brunch item in China. Dou Jiang is basically a soy milk soup, curdled slightly with the vinegar, and flavored with scallions, sesame oil, pickled radishes and the crispy fried dough

Sometimes it is, sometimes it isn’t. I know people who consume plant based milk for health reasons such as lactose intolerance.

However, the majority of the people I know who use plant based milk do so because of the reasons I stated.

Hi Sunshine. If you don’t mind, let’s split this plant base juice/milk as a separate discussion. This is a nice topic and deserve a little focus attention.

Sometimes, birds of a feather flock together.

Right now, most of my friends who don’t consume dairy avoid it because of lactose intolerance or dairy allergy, and occasionally because of religious restrictions if they keep kosher and aren’t having a dairy meal.

I was an ovo lacto pescatarian for 2 years in my 20s and 2 years in my 30s. Avoiding meat and poultry is fairly easy for me. Avoiding dairy completely didn’t work for me, the times I tried.

Because I am neither vegan nor vegetarian, a glass of milk makes me miserable for days, but I actually like milk…so a beverage that tastes like something I like but doesn’t are me miserable is a wonderful thing.

There’s a poster (sorry, I don’t remember who) who is allergic to animal proteins after a tick bite, if I recall. I would completely understand if they wanted to rat something that tasted like something they are unable to eat.

The number of people who have chosen a plant based lifestyle because of health reasons…same.

I know a few who do it for the animals…and quite a few if them are happy to eat the subs because thr. They have the flavor they like with no guilt.

YES! Nothing to do with those packaged ones in shops.

I know the really good soy milk, they use a stone mill to grind the beans. Don’t know why, I have some stomach and indigestion problem with some plant milk, especially almond milk. (Can be worse than lactose intolerant raw cow milk problem.) I wonder if anybody has problem as well.

Coconut milk… YES! Other plant/nut based milks not so much. I like milk (especially chocolate) and ice cream.

There’s a poster (sorry, I don’t remember who)

Today is a devastating day for me. I do not know what will happen but test result came back today shows I am positive for alpha gal, that means I was bitten by lone star tick and considered a risk if I eat red meat, as well as possibly products like milk, gelatin, even medications that contains gelatin. It can cause anaphylaxis reaction. I vaguely remember writing about this once on Hungry Onion when I found out a friend was diagnosed with this syndrome. There was no response from anyone so, i…

She hasn’t posted in a while. I hope she’s okay.

I happened to go out for lunch and then bought a botte of barley milk. 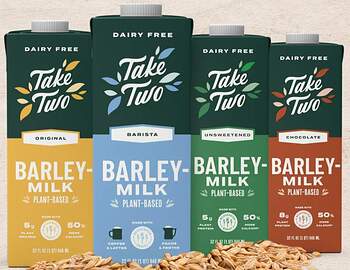 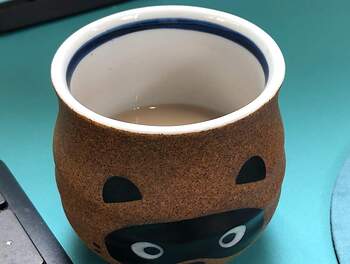 I was thinking horchata mixed into coffee is probably good!

There were also a lot of hemp milk drink too.