Petty, paring--or something in between

We value the credentials of the “grinders” quite differently.

Other than technology and process, I’m not interested in a knife unless it is a practical tool in my kitchen–for my purposes. I like harder steel knives because they are easier for me to maintain at a high level–but I really strain to justify them with my SEUs.

The Kai Seki Magoroku nakiri I brought back from Japan more than thirty years ago is thin and light, harder than my Wusthof, and still does a great job prepping vegetables–just like my host family did in Japan.

The Xinzuo small cleaver I purchased as an upgrade is slightly sharper, wider, and heavier–a slight improvement IMO. Cost $63–met my SEU. There is a Yaxell that is about the same steel, width, and hammered look that I could have got for about double the price–right at the limit of my SEU. I liked the handle on the Xinzuo better–and I already had one–so I knew what I was getting.

I have only a few softer steel knives

I’m already facing a world in which a Volvo is a Chinese car; I don’t want a Shun to be a Chinese knife.

We value the credentials of the “grinders” quite differently. 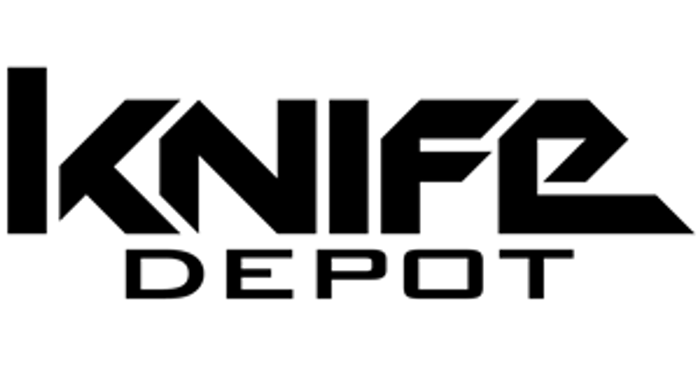 A Guide to Knife Grinds and Edges

Written by Timothy Martinez Jr.   To beginners, a knife consists of two parts: a blade and a handle. This simplistic view of the knife is fine for most people, but if you want to know your knife on an intimate level, you must understand how...

Other than technology and process, I’m not interested in a knife unless it is a practical tool in my kitchen–for my purposes.

This holds true for each and everyone of us. Including the guy who says a Wusthof sucks, and only wants to buy hard, thin J knives. Who is right? You? Or the other guy?

Of course there is no right or wrong here. So, that is also true if you say people at kkf are newbies because they have different beliefs about how a knife should cut. In the end, my approach is to understand other people’s views, and see where I could benefit from that knowledge.

I don’t want a Shun to be a Chinese knife.

You’re not helping by buying from aliexpress - if anything you are feeding the Chinese machine.

Most home cooks I have known all over the world–and even the ones we meet here–have a very limited budget for kitchen knives. What’s been most interesting to me is the difference between the Americans, Chinese, and Japanese I see in their homes. The J knife I have that still best fits in this world is my 30+ year old nakiri and a few utility knives. If my home cook knife budget gets too out of whack, I’m not a home cook any more

You participate actively in a worldwide community of about 6000 knife enthusiasts/collectors. I do as well, but my interests diverge pretty sharply from you and others in that I’m more interested in production and process than a specific knife to play with at home. Right now, that’s why I’m focused on dual core.

it leads me to consider marketing trends–and I think dual core production capabilities is a potential predictor.

My interests are a better fit with BladeForums than Kitchen Knife Forums.

I’m much more a kkf observer than a kkf customer.

That’s my observation of your interests too. Process over all else.

What’s most interesting to me is the contrast between the German, Japanese, and the Japanese Fusion approach to smaller knives. For the Germans, it was an unending variety of utility knives–several inches shorter than the Chef’s, slicer, and bread knife. The Japanese approach was to maintain the profile, but shorten the length–a petty knife.

Kai used Shun to produce something new. Shun preserved the concept of utility, but introduced it in both a Western and a Japanese fusion way. I bumped into the Japanese fusion way with my t" utility when I purchased the serrated version for lefties–functioning as a single bevel knife.

The Kai Shun approach to utility seems to have gone in throwback mode with the Shun Kanso Asian Utility knife: a 7": 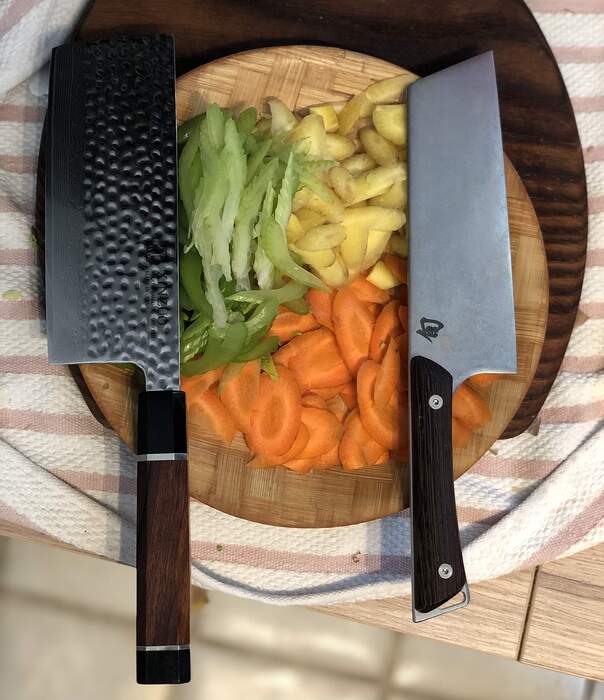 Blade looks like an artisan knife. with expected future patina.

I compared them as upgrade candidates for my Kai Seki Magoroku nakiri.

Even if only one knife is made with all steps by one designer–like Eiron, who posts here–it’s still a collaborative effort with those who made the pallets and special instruments he uses. If he reproduces many, he’ll have different challenges at different scale points wth different teams of partners.

I associate the tasks I carry out in my kitchen with various profiles. I use these profiles as guides for particular products I am considering–art various scale points.

If you look at knives in my batterie, you’ll see almost no “style” overlap from knife to knife. They were not the result of mindless robotics at any scale points-and the named artisan knives you’re buying may have the named person doing finish work, but not all the work by himself–maybe not any work at all. Bob Kramer has scaled up from just one custom knife to profile models with large scale production.

My kitchen knives are clearly diverse–even as they work extremely well for the tasks I purchased them to carry out. I think they have plenty of “soul”–look at them.

Look, if you buy mass-produced cad-cam designed knives from aliexpress and Shun - why don’t you just come out and own that decision? Just say I don’t want to spend 400 dollars on some crazy J knive made by a loner in a back alley.

Most people would agree with you if you’d say so, you know… Shun and aliexpress knives may offer great value to you and many others, but don’t suggest they have ‘soul’. Their marketing campagnes may have soul, but not their products.

The soul part is subjective but it is pretty rude for Ray to characterize the Kitchen Knife Forum people in these negative terms.

cad cam and mass produced are not the same at all. Even an individual blacksmith uses cad/cam to operate equipment. It’s the integration that is the scale factor. Many Shun knives are outrageously expensive. The dual core Shun has already risen in list price to over $400. Even the Xinzuo dual core I purchased was quite expensive–about $170.

I bought the dual core for the technology–not my batterie. Gave the Shun dual core to Dr. H.

I believe that all knife designers have special feelings for their knives–all over the world.

When I used to write and arrange music, I believe that I had much the same feeling.

Look, if you buy mass-produced cad-cam designed knives from aliexpress and Shun - why don’t you just come out and own that decision? Just say I don’t want to spend 400 dollars on some crazy J knive made by a loner in a back alley.

Let me unpack that a little bit.

When I started my cooking hobby 7 years ago, I decided to build my kitchen knife batterie around two tools: a Western butcher knife, and a Japanese Nakiri. All of the tasks I intended to carry out were thought of in terms of these two categories–envisioned in some profile.

All of the utility knives that I already owned harmonized with the Western butcher profile, so that’s where I started: an 8" Wusthof Chef knife. This was not much of a stretch from my American butcher profile–and allowed an upgrade from the paring knife I started with as well.

It was already out of balance with the other organizing profile: my Japanese nakiri. How would I fit it in? My foundational profile was Kai Seki Magoroku which was super compatible with Shun. I chose a more solid Kaji santoku and 6" petty/utility knife to complement the Western knives.

From then on, I looked for kitchen knives that continued this fusion between East and West as task demands led to updated profiles and additions to the batterie. There is no surprise that those upgrades and additions would include knives by Ken Onion, and Miyabi as well as Shun.

The surprise is that I now have five Chinese kitchen knives that fit in so well. My Shan Zu 8.3" was given me to evaluate–no strings attached–after I strongly criticized them. It was “put up–or shut up.” The Shibazi cleaver was the result of a search. The Xinzuo three knives were bought to compare with Shun.

Why am I not considering artisan knives?

I’ve only seen, been given, or purchased kitchen knives that were at least batch produced, so I haven’t even considered artisan knives. I didn’t see any when I was in Japan on my visits, either.

But I’m not against individual craftsmen–and cost is not the only stumbling block for me.

Right now, they don’t deliver on the American-Japanese cultural fusion that is at the heart of my batterie.

What if I considered adding an artisan petty knife?: 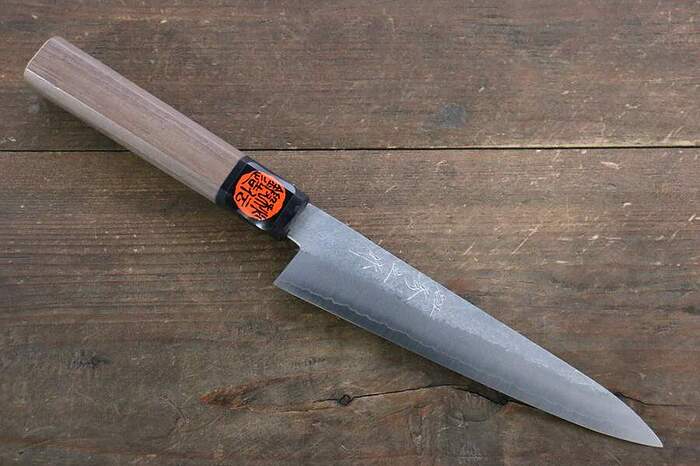 It’s about the same price as my Shun–similar hardness.

Would that be a good comparison for other knives in my batterie?

Tell us more about the knife Ray.

Unlike my Kai Seki Magoroku, this knife had a half bolster. Unlike the traditional Japanese rat tail wa handles, the Shun had a hidden full tang.

The VG 10 blade is a core surrounded by 34 layers of softer steel on each side. These SS layers resist staining and make the knives nearly rust proof. In addition to reducing the likelihood of chipping, the layers on each side can be post processed mechanically to reveal a subtle cdamascus like pattern.

The artisan Sakai Takayuki is similar to Shun: 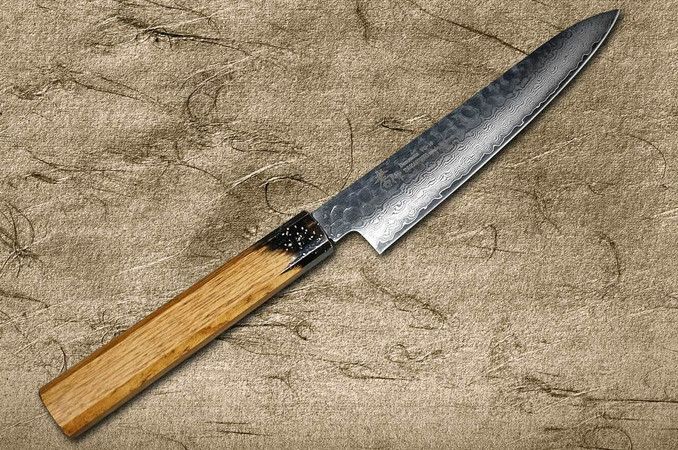 The 33-layer Damascus Knives are crafted out of a 33 layer VG10 damascus steel.These knives have a seriously sharp edge, extremely hard (hardness : 60-62 HRC), excellent edge retention and a light center balanced feel.The handles on these knives are...

but more like my Kai Seki Magoroku nakiri profile from 30 years ago: light, no bolster, simple wa handle–with rat tail tang rather than the full tang on the Seki magoroku.

Like the Shun, the Sakai Takayuki steel had been updated to VG 10 with damascus cladding, but 16 on each side compared to 34 for the Shun.

Since Kai introduced Shun almost 10 years ago, Shun has backed away from their own Japanese-American fusion somewhat. The Chinese seem to want to please both sides. The Chinese Xinzuo petty knife that I’ve purchased recently has versions that have or don’t have half bolsters, but have about the same layering as the Shun. The Xinzuo Zhen Petty I’ve purchased is a lot like the Sakai Takayuki.

I paid about $70 for my Shun–and $38 for my Xinzuo. Even if I had an extra slot available, it would be hard for me to justify a Sakai Takayuki unless it were priced below $90. However, unlike many artisan knives I might consider, this one meets my SEU requirements.

Time to try a Sab carbon! $75 with an olive handle and less micarta…two new horizons at once, French shape and carbon steel. Good selection at Flotsam and Fork. They also have those wonderful Herders plus Pallares Solsona, Au Sabot, and Nontron.

It has to fit a pre-existing “slot,” consistent with the batterie as a whole. It often takes me a year or two to go much beyond my analysis of the Sakai Takayuki.

Things are always changing, so I never fully reject anything.

The Sab 6" is the same size and basic type of knife. That was why I suggested it.

Apropos of nothing, my penchant for looking at the world as Marie Kondo might (hard to believe after the pictures of my kitchen), I enjoy having a few empty slots in my knife drawer, a pretty empty drawer, a few open slots on my spice rack, and a largely empty cupboard. Now if I could find a way to scour my shelves. Not a likely prospect.

I’ve been looking at those …