I was just chatting with a friend about patty melts and was inspired by the recent tuna melt thread to ask a similar question about patty melts. What does patty melt mean to you? My friend is from Rhode Island and was surprised when I mentioned that in my experience, patty melts come with Thousand Island/Russian dressing. He asked if it was a midwest thing (I’m from Michigan), but I am quite sure I’ve seen patty melts with dressing on diner menus all over the country. He also prefers his with cheddar, but knows that swiss is the traditional choice (and the BETTER choice!).

So, what do you expect when you order a patty melt? I want well-buttered, griddled rye bread, a thinnish burger than covers the bread completely (cooked medium-ish), lots of onions, melty swiss and I expect it to include Thousand Island (though I always ask them to sub blue cheese). It should be greasy and messy and utterly delicious in every way!

Patty Melts don’t normally come with 1000 island. I’m in So. CA. I grew up in IL but don’t remember patty melts having 1000 island on them there, either.

Everything you like . Except haven’t seen Thousand Island or Russian dressing on the ones that I have ordered .

Grilled onions, Swiss and mayo on light rye sliced diagonally with lots of thin, too salty fries on the side.

I don’t eat them, but I know people that do. I don’t seem to recall ever seeing those dressings on a patty melt. I think it is essential for a Rueben sandwich, though…

I pretty much grew into adulthood on party meets from a local SoCal chain called Hamburger Hamlet. I don’t recall any kind of dressing (1,000 Island OR Blue Cheese). Otherwise they were open-faced and exactly as you describe. The chain closed but it’s brand was bought by somebody who is doing a resurrection. I looked up their menu and the tomato shown here was definitely not on it back then. Chef license 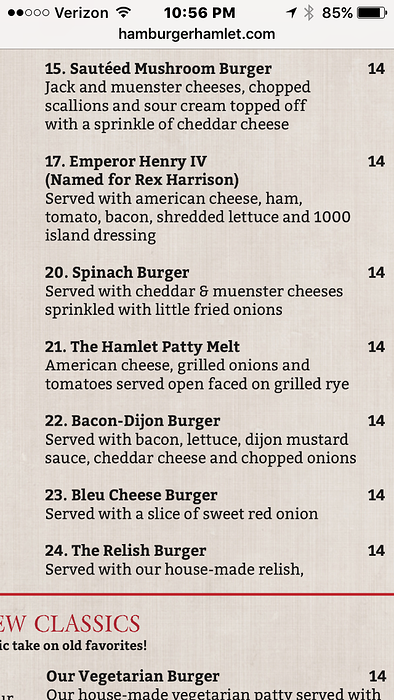 Wasn’t there a Hamburger Hamlet in Westwood?

Looked at the Steak & Shake frozen patty melts at GO.
They are 2 pieces of rye chopped onions, steak and American cheese.
Swiss sounds better to me.
I remember them being served open faced in KC also , so maybe that’s a regional thing.

There was. I think it had grown to maybe 10-12 locations at one point.

It’s about half and half here (northern Ohio) whether or not they come with dressing.

Interesting - perhaps it is more of a midwest thing. I know my favorite diner in college served them with dressing though, and that was Rochester, NY.

Ate a lot of burger lunches at the Downtown Hamlet and saw many orders of onion soup go by.

Wasn’t there a Hamburger Hamlet in Westwood?

And on Beverly Drive in Bev Hills. I ate there a couple times when I was a kid. But I don’t like hamburgers, so I just remember that it was fancy and they had valet service.

And on Beverly Drive in Bev Hills. I ate there a couple times when I was a kid. But I don’t like hamburgers, so I just remember that it was fancy and they had valet service.

The Sherman Oaks one is still there. I haven’t been since the reopening though.

Sherman Oaks is the ONLY one now, and it’s a resurrection attempt by a guy who bought the rights a while back. There used to be HHes on Beverly Drive, near Beverly Center, on Sepulveda at National, Brentwood, In Agoura, and Costa Mesa. More I think too.

I’ve always lived in NY and MA, and never heard of dressing on patty melts, which are my favorite burger.

@biondanonima —> FWIW, I’ve never seen a patty melt with Russian dressing . . . anywhere! Obviously they exist, but I’ve not come across it served that way, and I’ve had them in Illinois, Southern California, Northern California, the Pacific Northwest and NYC, to name just a few. Also, I’ve never had them as a “thinnish burger,” but rather a medium/medium-thick, juicy one.

@emglow101—> I, too, grew up on patty melts from the OLD Hamburger Hamlet, as well as those at Ship’s: always grilled rye from the flat-top (not toasted), grilled (caramelized) onions, American (or Cheddar or Swiss) cheese, and as rare as they’d let them out of the kitchen! No Russian or Thousand Island dressing, no mayo, no anything else.

@jammie —> The Hamburger Hamlet in Westwood was on Weyburn, just off the corner of Weyburn and Broxton, on the north side of the street. It was right around the corner from when I worked and across the street from the donut shop now known as Stan’s. Used to go there, or the one in Beverly Hills.

FWIW, Tom Waits “immortalized” patty melts for me when he said (on his album, “Nighthawks at the Diner”), "Yeah, I’ve had weird looking patty melts at Norm’s . . . " According to the Norm’s website,

Wow…growing up Biff’s (or “chicken in the pot” as my sister and I called it) was our Sunday morning tradition. Have not heard that name in years.