Located within Ghirardelli square, Palette Tea House is a new dim sum parlor started by the Koi Palace/Dragon Beaux team. I just wanted to check the soft opening of the restaurant and just see how it compares to the aforementioned places. 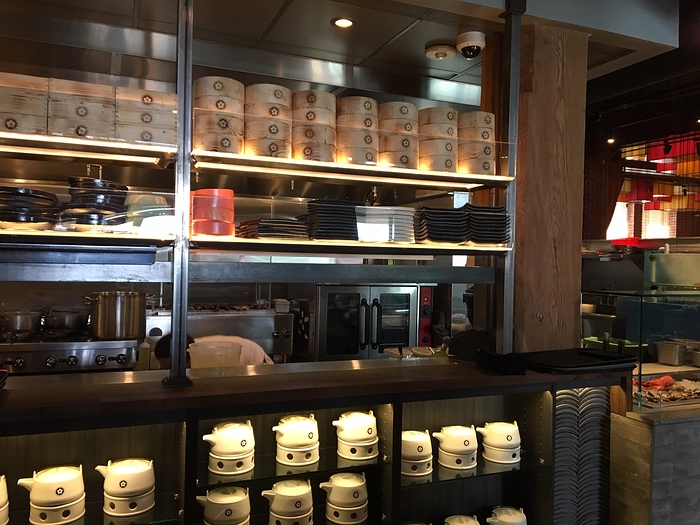 Just a peek once you enter the front door.

The ceiling and design reminds me of a mix of KP and DB which kinda makes sense. There is a relatively nice looking long table with a pond running down and a bar set in the outer glass enclosure. 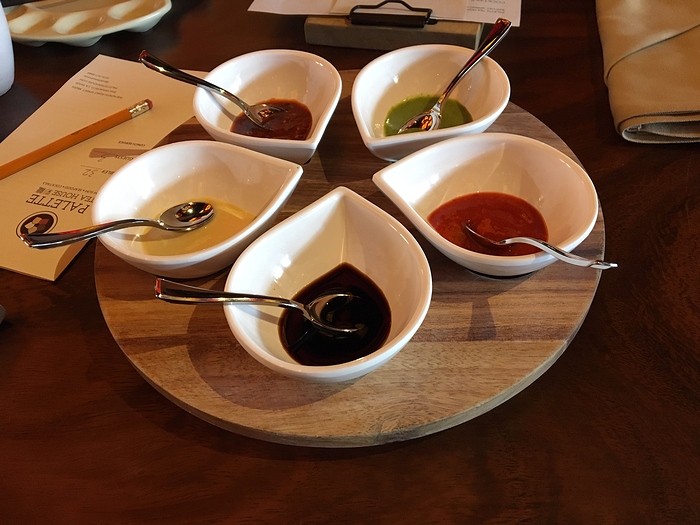 There are 5 different sauces to choose from, starting from the Six O’clock position and going clockwise we have soy sauce, Chinese mustard, a more thick chili sauce with a bit more spiciness, cilantro, and I think a little more vinegary chili sauce. 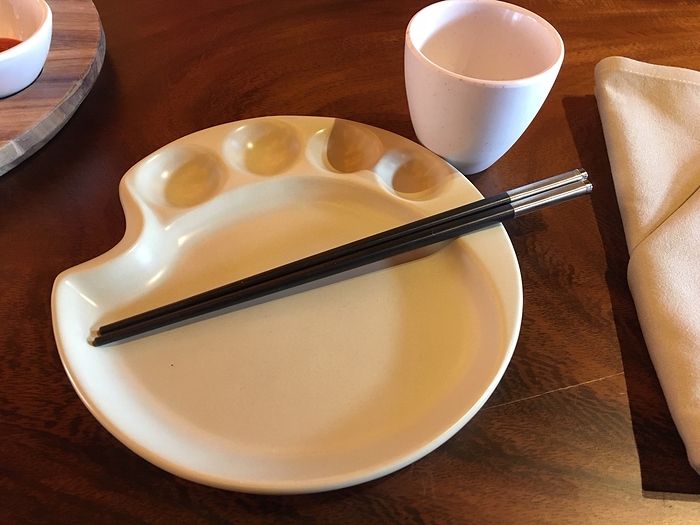 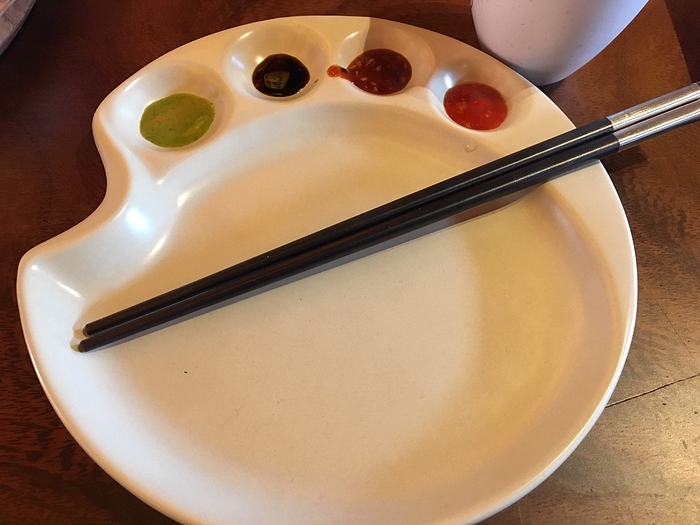 Their plate is a palette with four holes that can hold four out of five sauces which is a bit puzzling at times but not a deal breaker as the five sauces remained on the table during our meal.

Anyways, enough of the ambiance, onto the food! 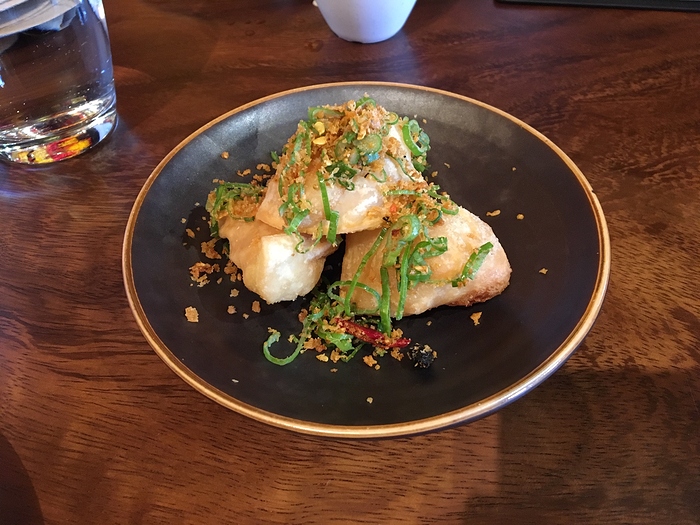 Started off with four pieces of the Typhoon Crispy Ha Gow. The dumplings were rather crispy and somewhat juicy inside. The garlic and scallions provided a nice savory taste but it wasn’t particularly spicy. 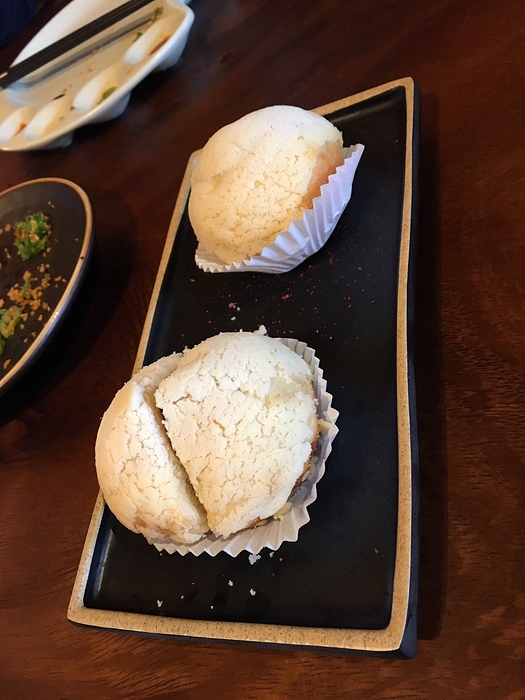 Next up were the Snow Cap BBQ Pork Baos which had a good interior with a good bit of bbq pork (no odd gristly bits), but I feel that the exterior could be more crispy and I do wish that they were served a bit hotter. 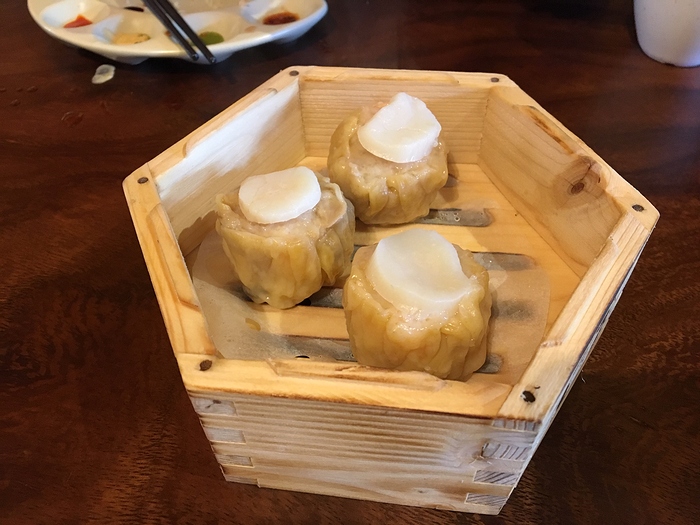 The Scallop Siu Mai that does appear on the Dragon Beaux menu appears in Palette as well. I think they do a good job at DB and it pretty much tastes identical at Palette though the scallops seem a little smaller this time around. 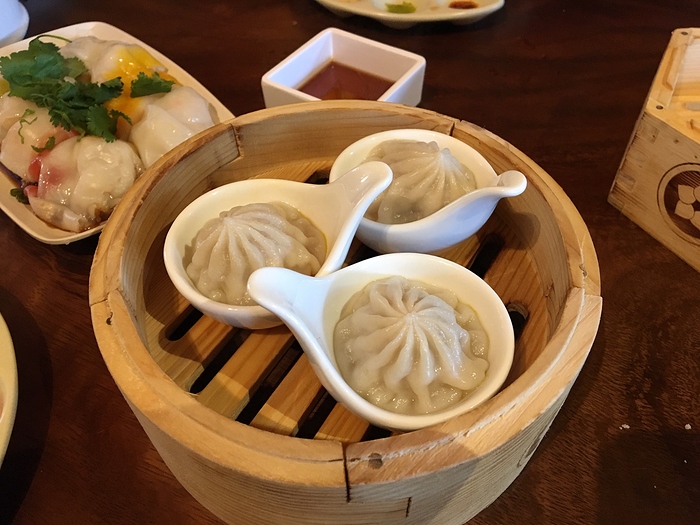 Next up, we have the Original Pork XLB which were pipping hot. The taste and texture haven’t changed from the KP/DB versions and well its as I expected. I’ve always enjoyed these XLBs as I find them juicy in the inside with the right savory notes. 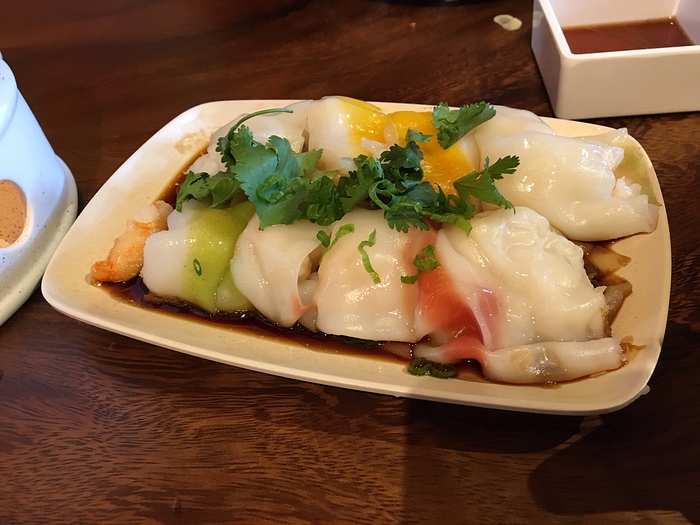 Following the XLBs, we have the Rainbow Prawn rice crepes. Multicolor hues are wrapped around the prawns but they really don’t provide any extra added tastes. 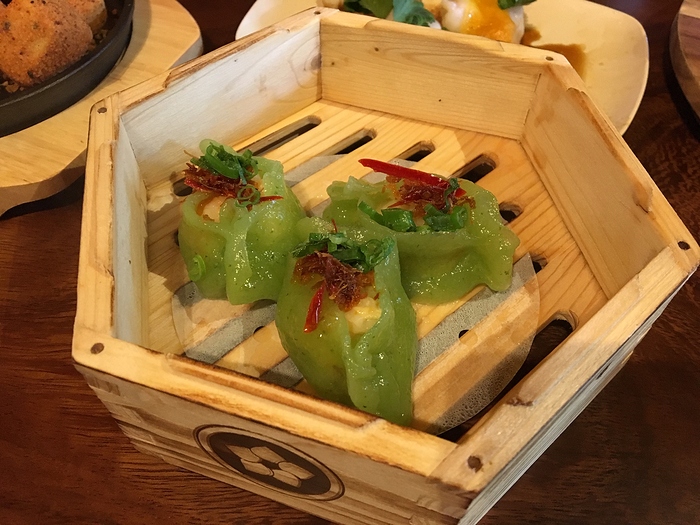 Next up are the XO & Shrimp Dumplings. The XO sauce had a good kick and the shrimp inside was still juicy. However, I wasn’t a huge fan of the wrapped skin as they pretty much stuck to each other. 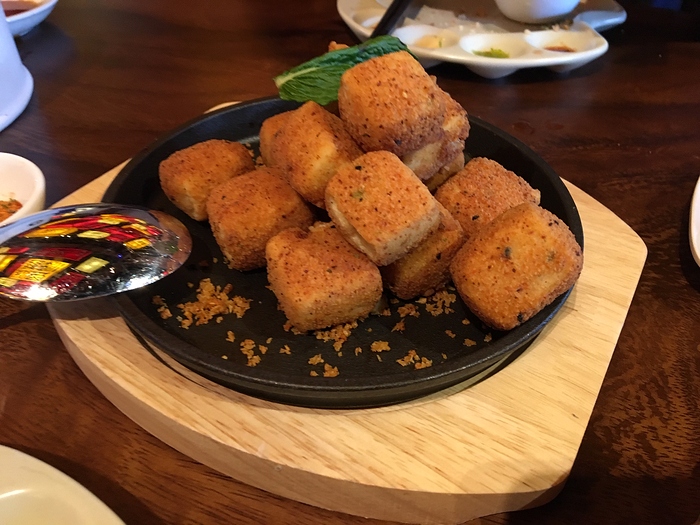 After our dumplings, we got the Seven Spice Crispy Silk Tofu which were indeed quite crispy. The tofu seasoning seems to be the Japanese spice blend shichimi tōgarashi. There is an additional little bowl of extra spice if you want to kick it up a notch. 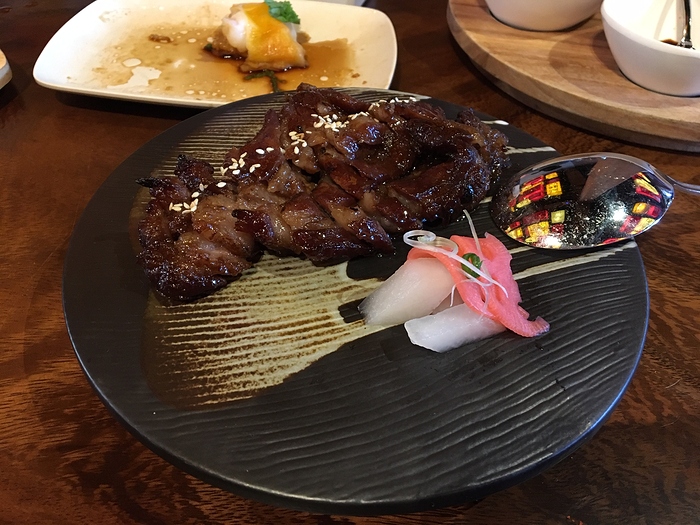 This here is the Iberico Cha Siu. We actually just wanted to see if this cha siu was the same as the photobook which called itself the Maotai Iberico cha siu. The appearance of our dish was less red and I couldn’t really tell if there was any win essence there. I was a little disappointed in the pork though as the fat didn’t quite seem to be evenly marbled in that sense; felt gristly. Flavor wise, I thought it hit the right notes. Savory with a hint of sweetness. 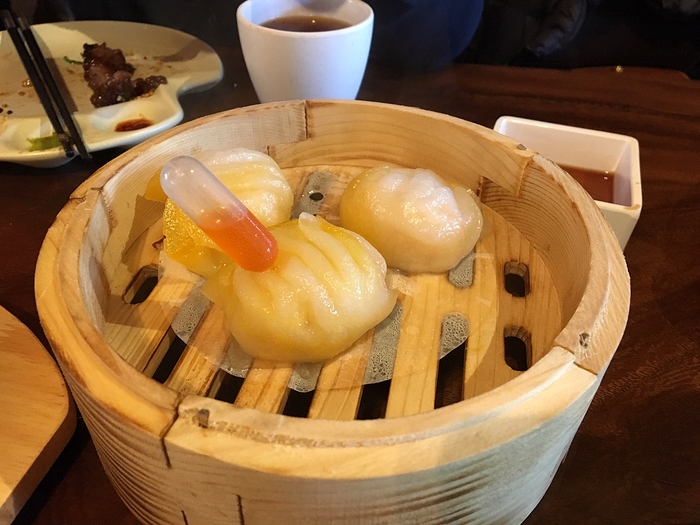 These are the lobster ha gow with a little pipette filled with lobster essence. I pretty much squirted an equal distribution of essence in each ha gow. The lobster meat and shrimp melded together and the essence of lobster added a unique taste to the dumpling. 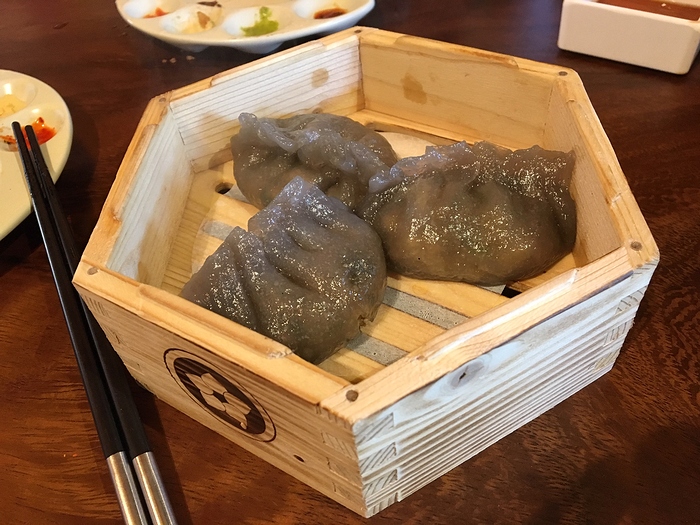 Our last savory dish of the afternoon was the Squid Ink Chiu Chow Dumpling. The greyish looking wrapper had similar issues like the XO shrimp dumpling where the sides stuck to each other, but the fillings of the dumplings were very good. Nicely minced pork with jicama, peanuts, and radish to give that good textural oomph. 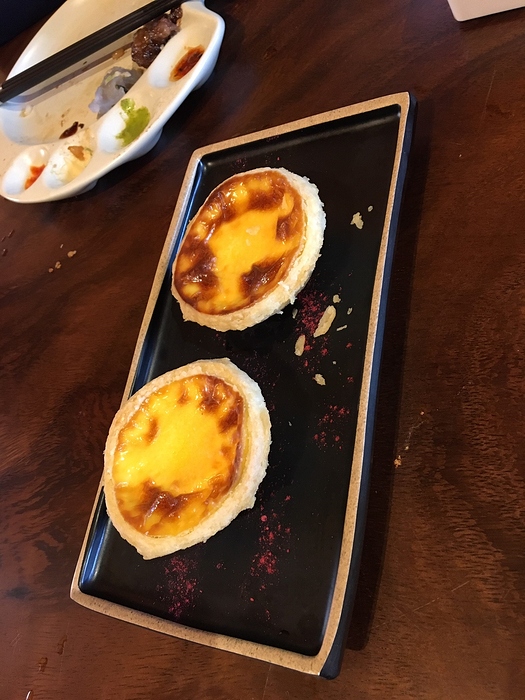 As dessert to our meal, we went with the Portuguese egg tart. Served warm with a nice smooth carmelized custard and flakey crust, the tart was nicely made. Personally, I still prefer Golden Gate’s egg custard tart but its technically different…

Total bill came around a princely sum $130. An 18% service charge was be added to the bill in lieu of gratuity and SF employer mandate. Overall, I quite enjoyed this meal and found their execution to be on par with Koi and Dragon Beaux. Prices do seem a little higher at Palette since they seem to provide a smaller number of items for roughly the same price as the other two places (4 vs 3, 3 vs 2). Not all the items seen in the picture book are available right now possibly due to the soft opening or seasonality but there are a few items I would like to come back and try.

Ack, just realized @brisket44 also made a post about Palette. Check it out there:

Your review brings so many bells & whistles! Thanks for posting.

I think its mostly the mentality of well, when am I actually going to be here again? Might as well try it! Which… … can be somewhat painful after eating and causes my wallet to go on a diet haha.

Don’t sully your beautifully composed review with a link to my upside down pictures!
Funny about the 5 sauces with 4 spots for them - they actually took ours off the table after we spooned them in - probably because there would have been no room for the food at our small table.

Funny about the 5 sauces with 4 spots for them - they actually took ours off the table after we spooned them in - probably because there would have been no room for the food at our small table.

Oh wow that’s super odd. Our table was for four people so we had some extra wiggle room. But the service we had was pretty good. Pretty much everyone was zooming around and picking up the empty baskets and such after we finished so we always had decent room.

I went to Palette for a late solo lunch today.

Only two sauces in my palette. Chili oil and soy sauce. 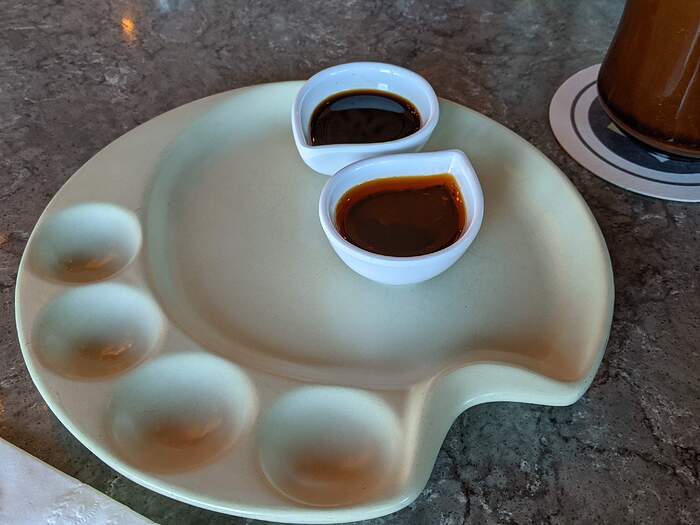 Typhoon Crispy Ha Gow ($9)
These were very nice and my favorite dish of the meal. Ha gow but crispy, I guess they are fried. Nice typical ha gow shrimp filling and covered with a “Typhoon Shelter Crab” type of topping of crispy bread crumbs, chili pepper, garlic, black peppercorn, scallion, and probably some other stuff I’m missing. 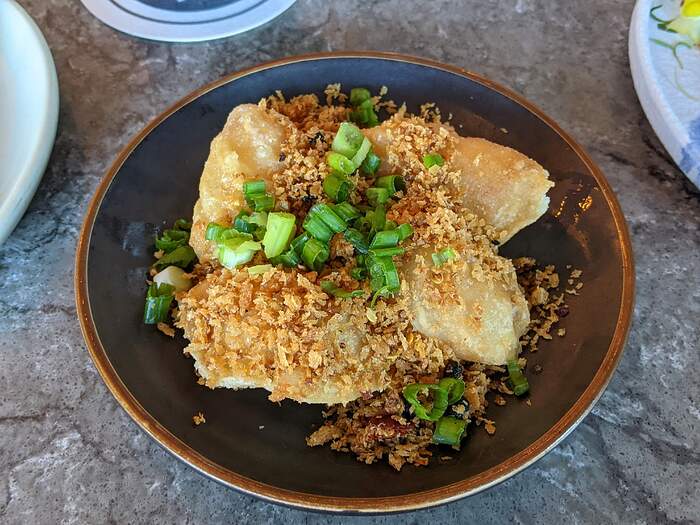 Black Swan Taro Puff ($10)
Quite pretty looking, but other than the black dyed taro exterior were fairly run of the mill taro puffs filled with pork and mushroom. The “heads” of the “swans” were edible (I hope) but mostly tasteless, I just ate one of the heads. 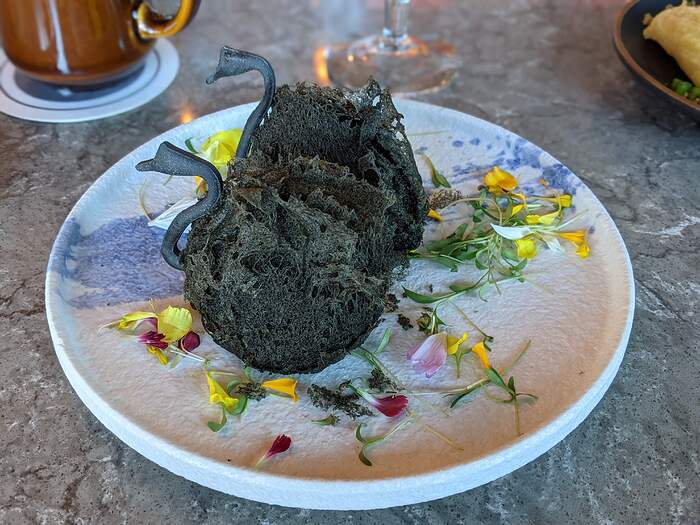 Palette Soup Dumpling ‘XLB’ Sampler ($14)
A bunch of different types of xiaolongbao. Starting clockwise from the un-dyed (original) one - original, beef & beet, kale (why?), crab, black truffle. Pretty good XLB and pretty similar to the ones from Koi Palace. I liked the original one the best and was puzzled by the kale one (which I think also had pork). The truffle one had a bit of truffle flavor (natch), and the yellow crab one had a little bit of crab flavor. If I were to get the XLB again I would probably stick to the classic version. 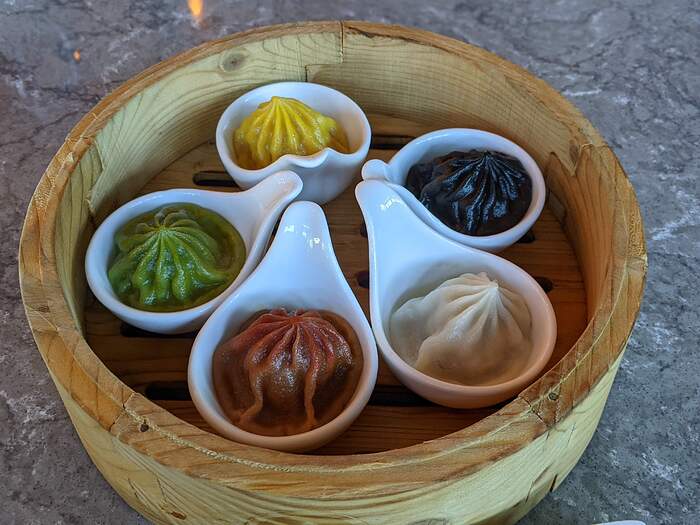 Rainbow Jumbo Prawn Rice Crepe ($15)
Like @Night07 noted the colors didn’t really add any difference in taste for me, I think they are just for the `gram. This was a pretty solid cheung fun though. Cheung fun is one of my favorite dim sum items. Nice plump shrimp. 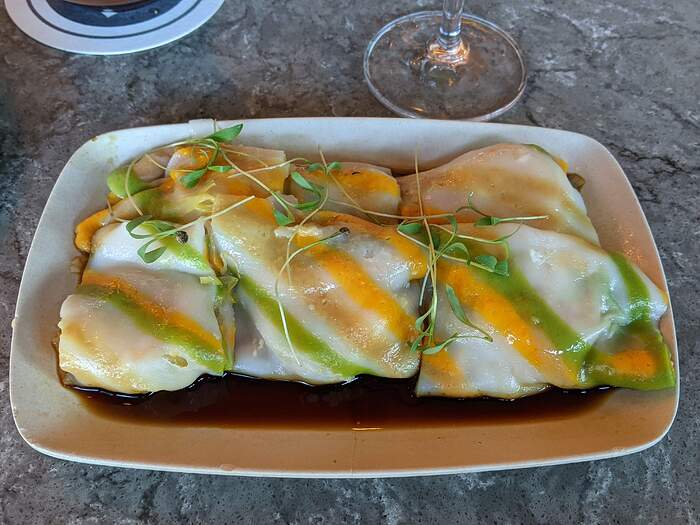 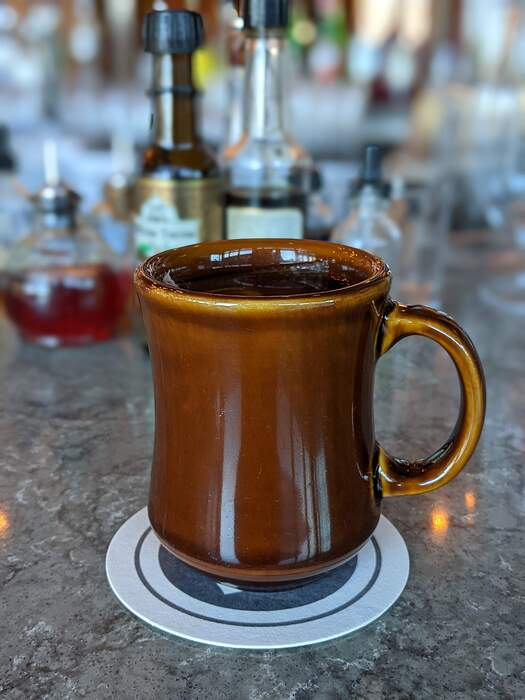 And they also have a full bar. I had a couple cocktails as well with lunch. Cocktails with dim sum, what a world. 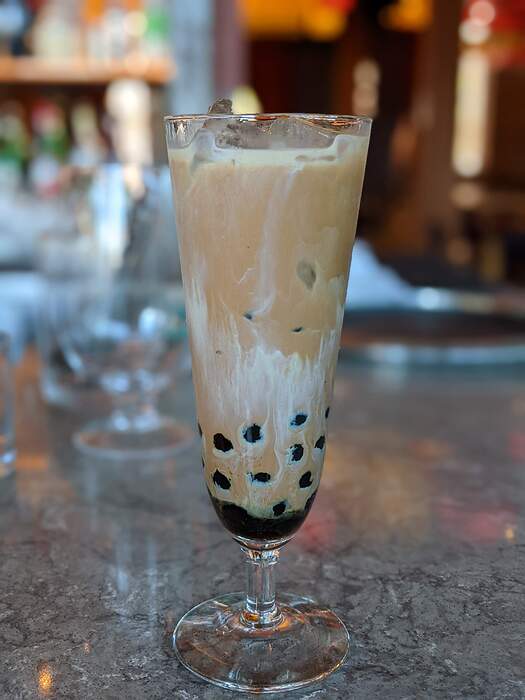 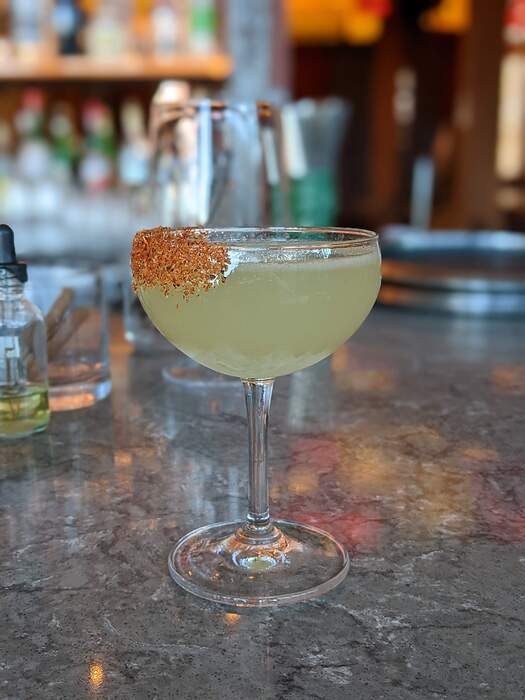 Ordered a little bit too much! It’s better to go with a group to dim sum. Pretty good dim sum if a bit expensive, though probably a bit expected from the touristy location. I would get the typhoon ha gow, cheung fun, and plain XLB again and would try some more of the cocktails. 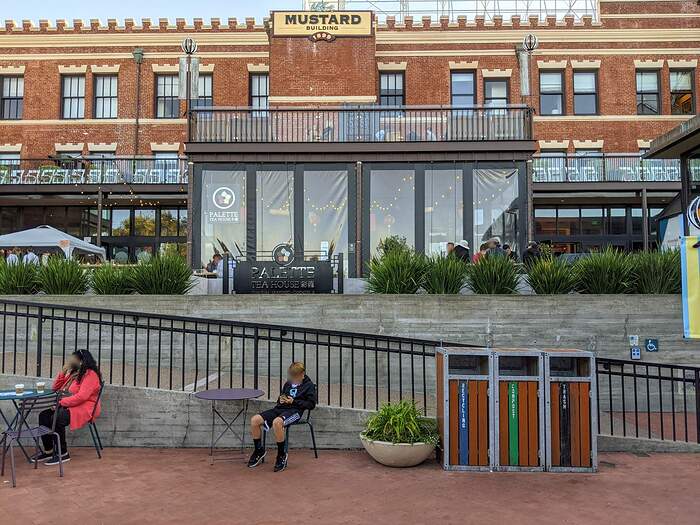