Fu Lam Mum has been closed for a long while. Are they still constructing?

Yum Cha Palace was busy the couple of times I went on the weekends when they first opened. Sounds like they are not doing as well now?

P.S. Fu Lam Mum reopened for a couple of weeks now. Passed by twice. Wanted to eat there today. But found out they closed Tuesdays. 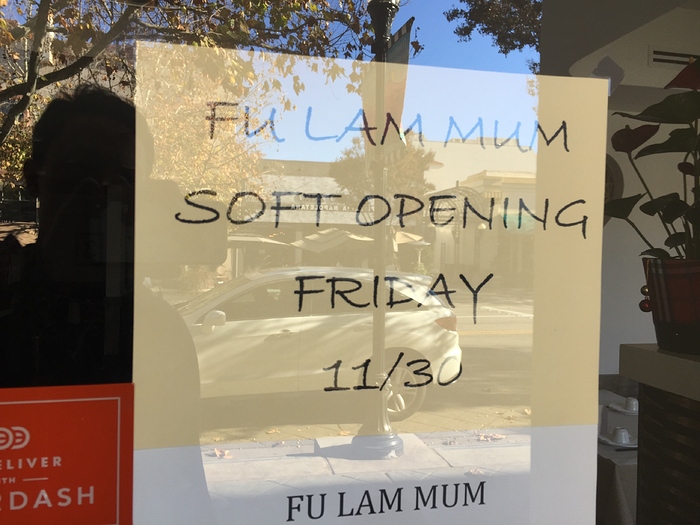 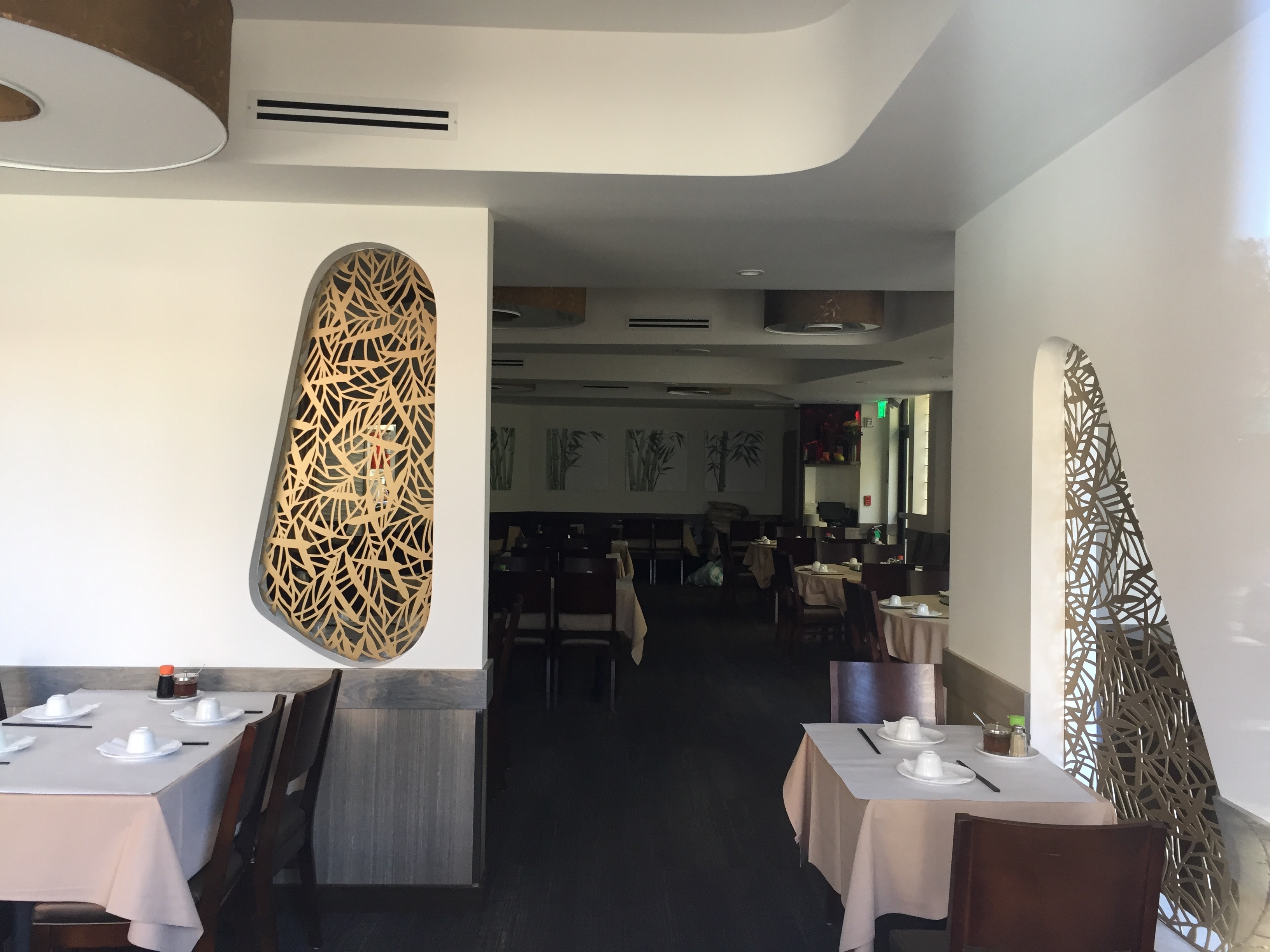 I was at a holiday party last night catered by Canton Dim Sum & Seafood. I’ve had dim sum from their take out spot on the side of their restaurant Hawthorne St. a few times and it has always been decent.
They had big piles of fried shrimp dumplings, spring rolls, fried taro, etc. but the fried stuff doesn’t lend itself to catering so much since the oil cools down and things aren’t crispy. The siu mai, har gow and vegetarian dumplings were good though, they had some system where they came out steaming hot. Egg custard tarts were surprisingly decedent, not too heavy or dense.

If this topic includes the East Bay, I’ll note that my experience at Emeryville’s Hong Kong East Ocean last week was pretty dismal. Some of the hot dishes were cold, and we weren’t paying attention until the bill came and we saw that the very simple Chinese broccoli was $10.

Note that this is not Alameda’s East Ocean restaurant, which consistently has excellent and unusual dishes.

In Richmond, Saigon Seafood Harbor recently, on a weekday, didn’t offer as many dishes as we had on weekends. No fried taro, no rice-noodle rolls.

The runner system could result in some cold dishes, when the order from the kitchen languishes at the intermediate dining room station before the server brings it to the table. As for the bill, the HK East Ocean view does come with a price.

Yes, the runner system was strange. The runner put our order on a station about five feet from our table, and it was probably six or seven minutes before the server brought it to us.

I was last at Emeryville’s Hong Kong East Ocean a couple of years ago, and there were maybe two items I thought were quite good. Everything else - nope.

HK Lounge 2 remains my favorite for a good solid experience.

Dim sum last month at East Ocean: everything with shrimp was enjoyable, as were the vegetarian dumplings; a worthy new discovery was chicken-stuffed eggplant. We too like HKL2, especially its baked cha siu bao.

Apologies – Emeryville. Houseguests wanted to try a theme of restaurants with water views during the visit.

Just ate at Lai Hong Lounge this past weekend and the food was pretty good. I’ve always enjoyed their baked BBQ pork buns and the outside was quite crisp while the interior was hot and juicy (maybe a little fattier for the bbq pork, but great!). Reminds me of Tim Ho Wan’s. The only bad one I recall was the wood ear dumpling; the interior was on the drier end and the outside wrapper seemed dried at the tips.

Just relatively small and filled with people. If carts are a thing for you, Lai Hong Lounge sadly doesn’t cater to that.

How does this compare to the Hong Kong Lounge on Geary? Looks like they are owned by the same people.

How does this compare to the Hong Kong Lounge on Geary? Looks like they are owned by the same people.

I haven’t been to Hong Kong Lounge on Geary for a while. Just based on previous, I’m more inclined to give a nod to HKL just cause its less cramped.

I think they’re partnered if not owned by HKL as you mentioned. We noticed one of the dumplings had the Chinese name of HKL at Lai Hong Lounge. But I think LHL is a bright spot in dim sum in Chinatown itself (just crowded)

Hakkasan, San Francisco
Roast duck pumpkin puff, bean curd lotus roll and bamboo shoot dumplings were great. Stir fried udon noodles with duck and XO sauce was good but could have used more XO sauce. Har Gao and Szechuan waygu beef mabo tofu were fine but nothing special, the mabo tofu was pretty bland. Scallop shumai was really dense and slightly fishy, tasted more like shrimp than scallop - not good. Their $16 cocktails are pretty darn good. I wanted to go to Dragon Beaux but my boss was picking up the tab so her choice. I suppose if you want good cocktails with your dim sum it is either Hakkasan or China Live. Prices are pretty crazy, I doubt I would go here on my own dime. 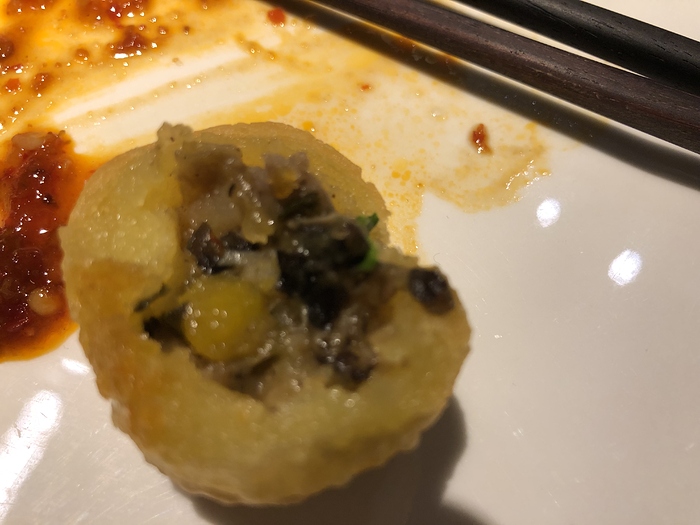 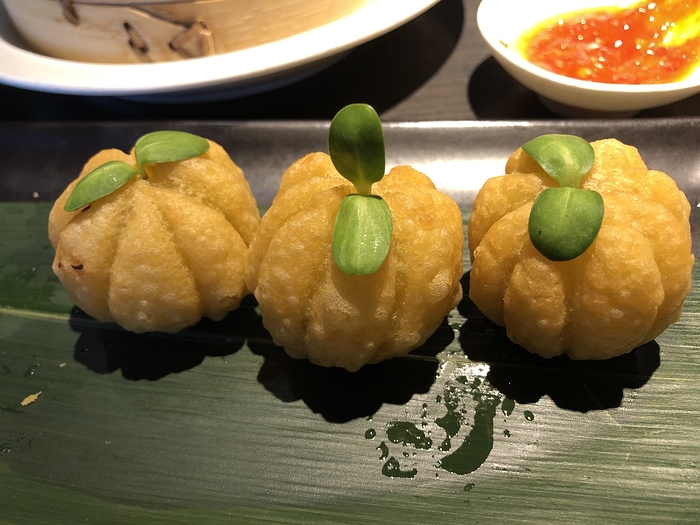 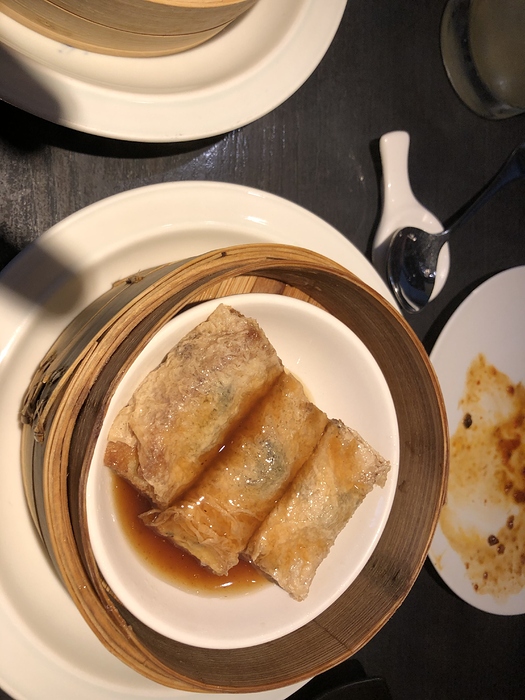 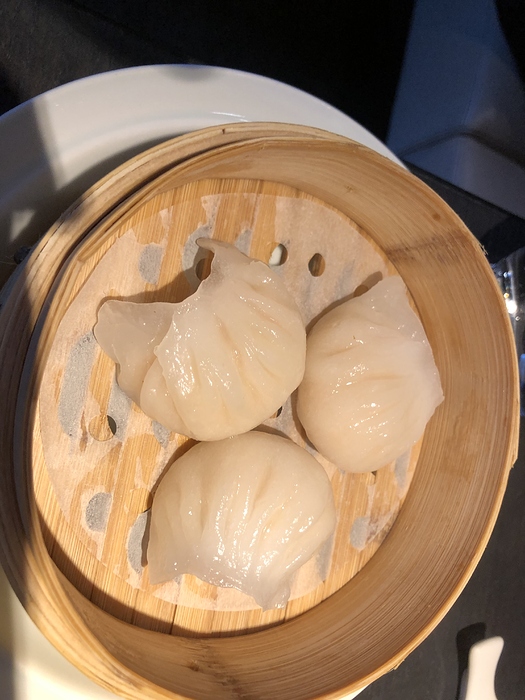 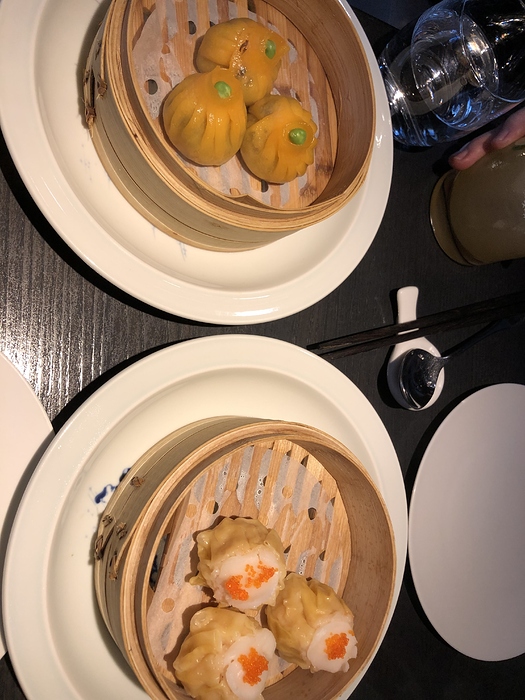 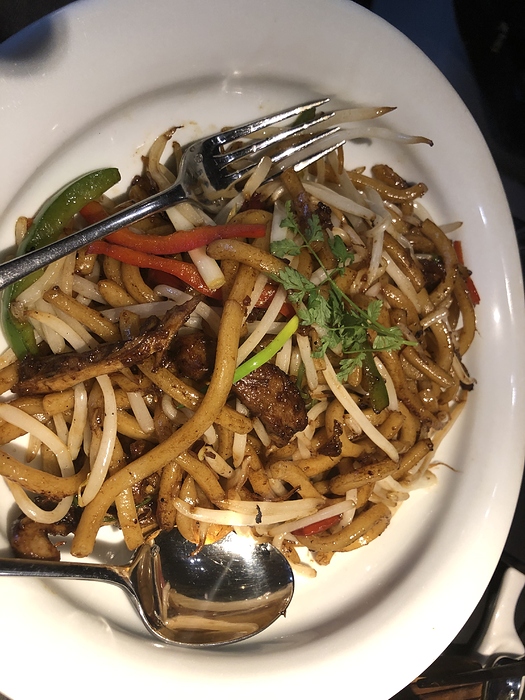 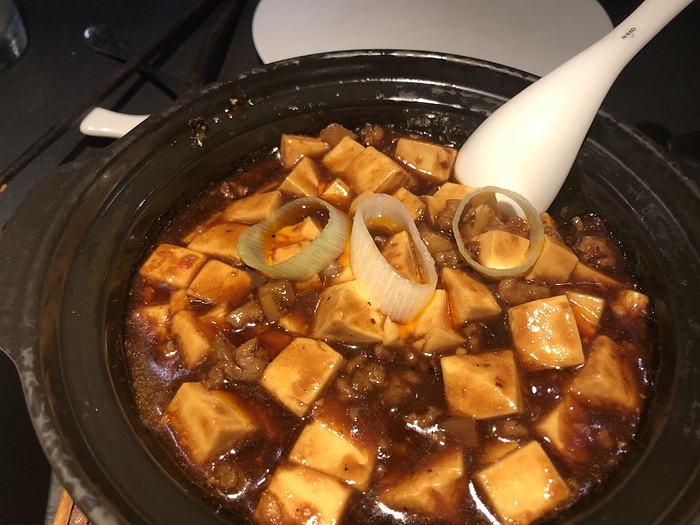 We just had our first Dim Sum of 2019 @ Koi Palace. Overall it was very good. We tried a couple of new items we liked and would order again. Here is what we ate: 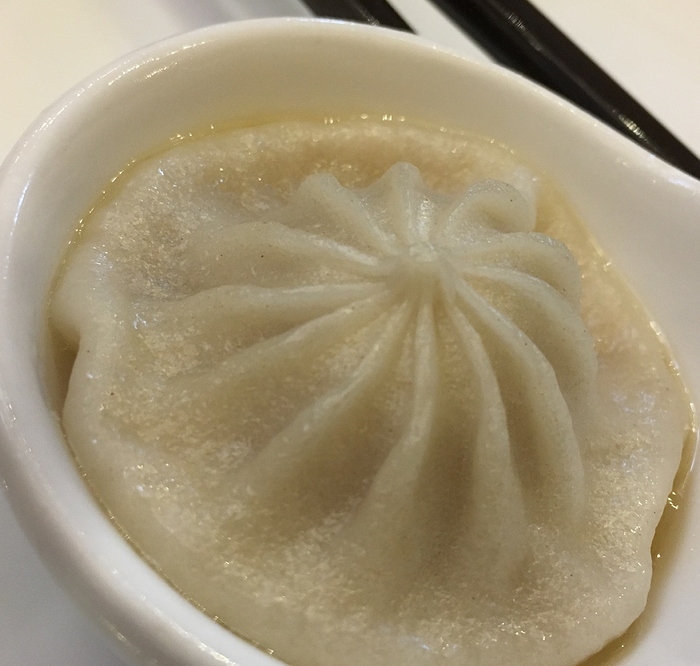 336FB23F-7779-4BCF-923E-3E5AFC344744.jpeg2392×2276 897 KB
XLB- now served in white ceramic soup spoons like at Dragon Beaux. Seems like they have a wide variety of flavors and colors now like at Dragon Beaux. We didn’t particularly like the multicolored ones we had at Dragon Beaux in the past so we stuck with the regular ones. They were good. Last time we were here we ordered the ones with crab roe and I remember them as being more flavorful and thinner skined than the ones today. 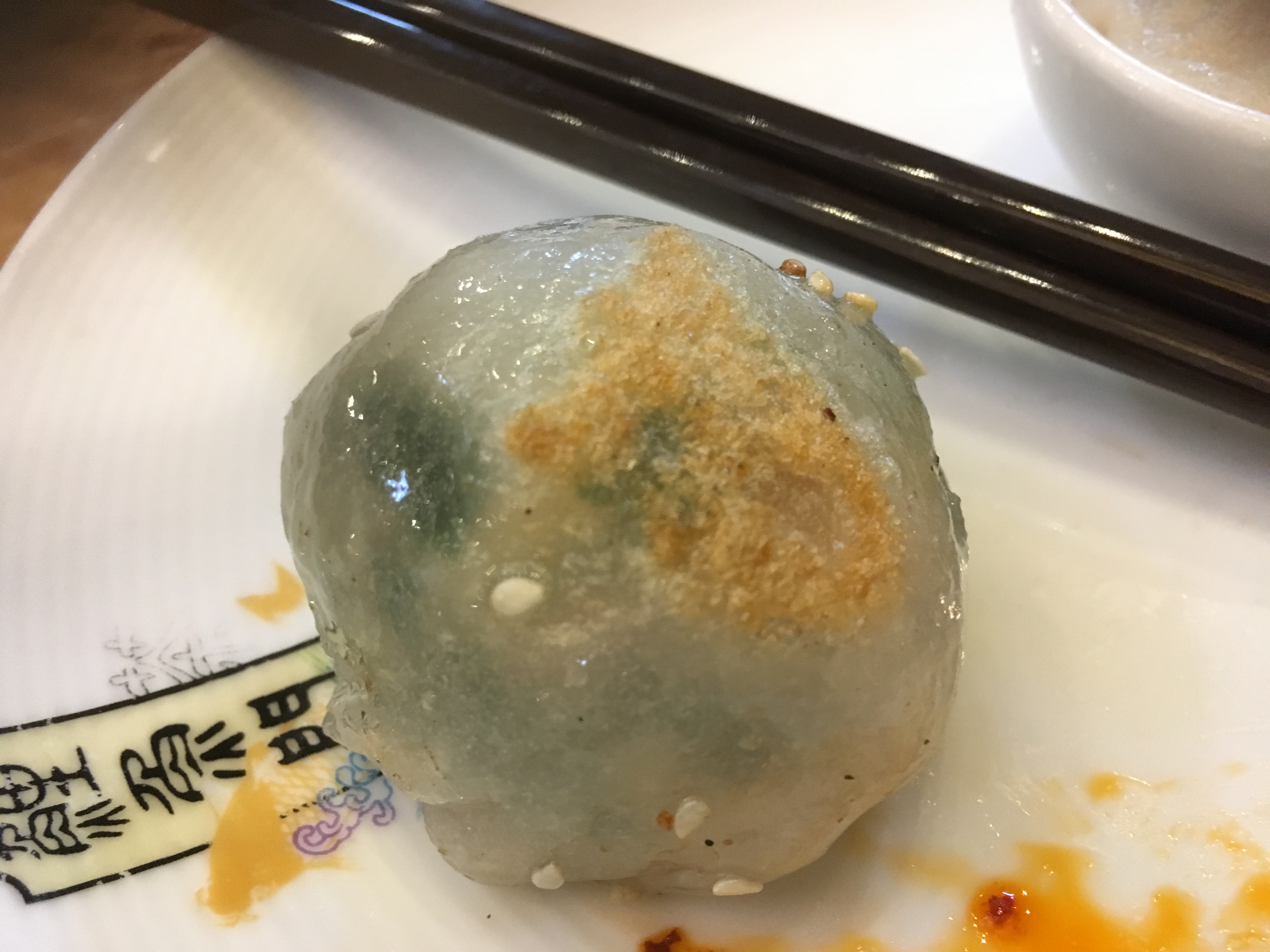 Pan fried chive and shrimp dumpling. One of my favorite things to eat here. Today’s was good but seemed less flavorful than the best versions we have had here. 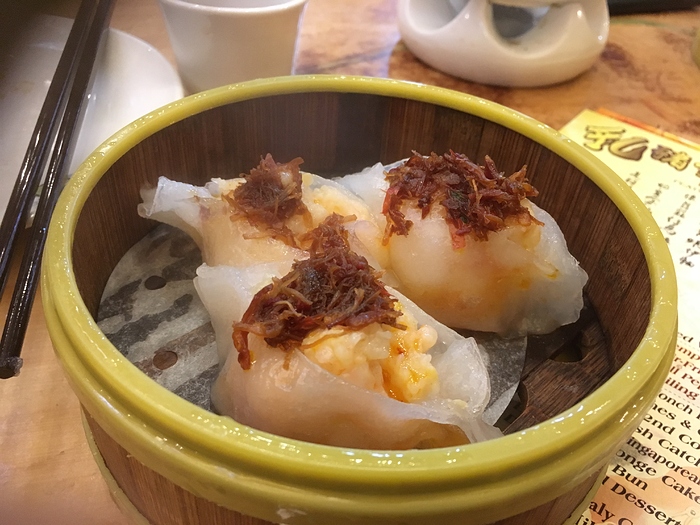 Shrimp dumpling with XO sauce. Another favorite thing to get here. Excellent 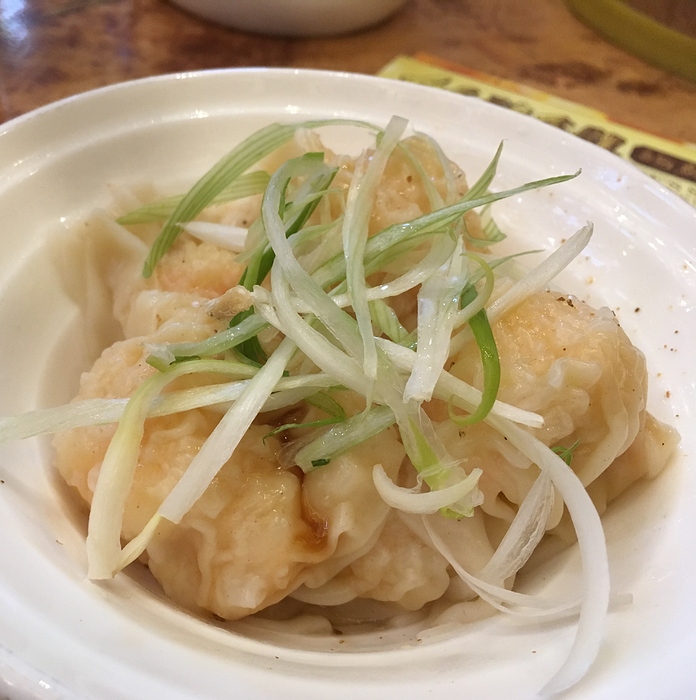 Wonton with shrimp roe. A new item we haven’t had before. Excellent! The filling was umami rich and had a slight mustard and Smokey flavor that paired well with the julienned strips of green onion. Would definitely order again. 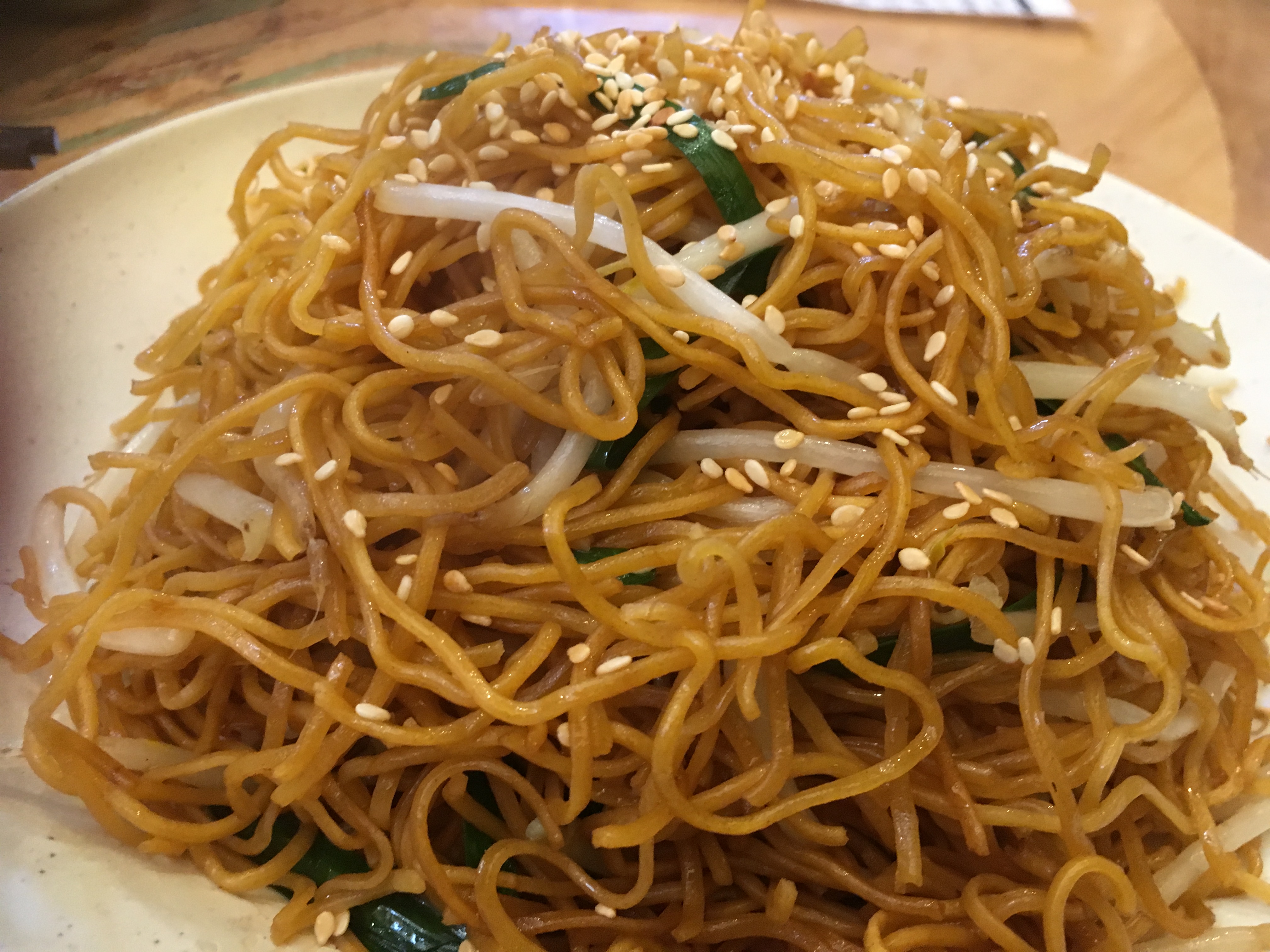 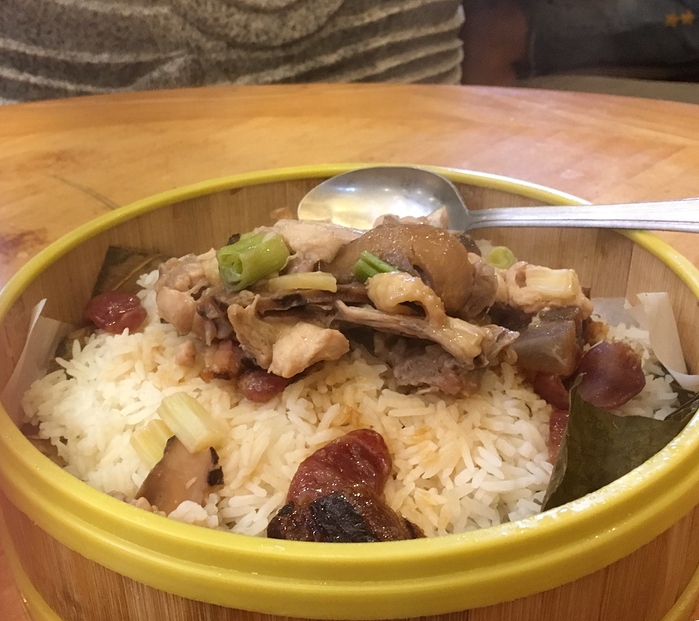 A new dish, I forget the name (I wasn’t able to find it on the online menu) that had rice, smoked and dried meats and chicken served with a lotus leaf underneath. I am not sure what kind of rice it was- not sticky rice rice but it was remarkably fragrant and good. The smoked meats were addicting and delicious. Would order this again. 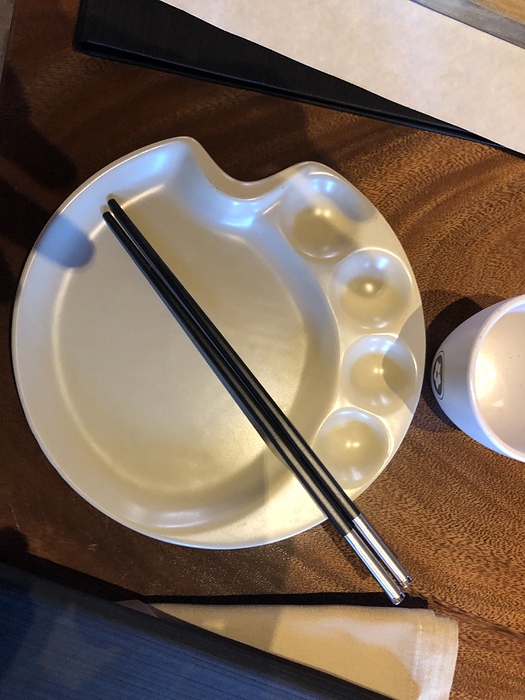 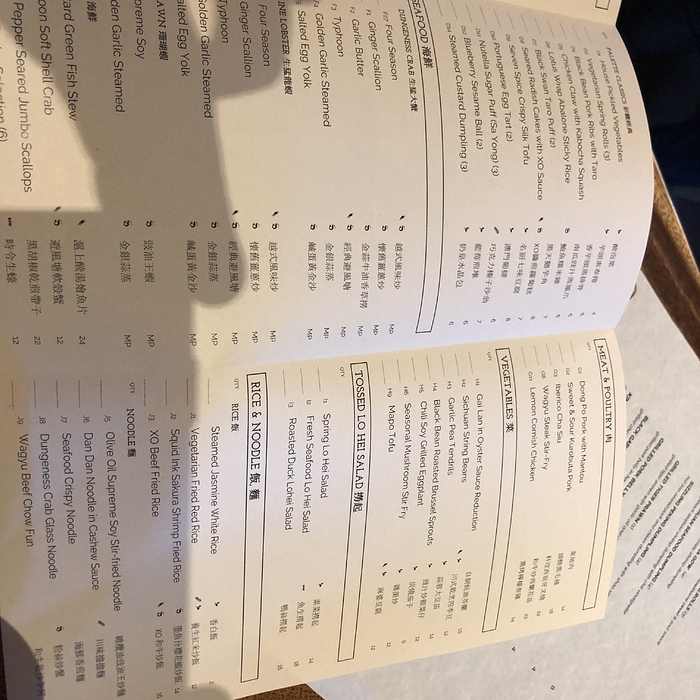 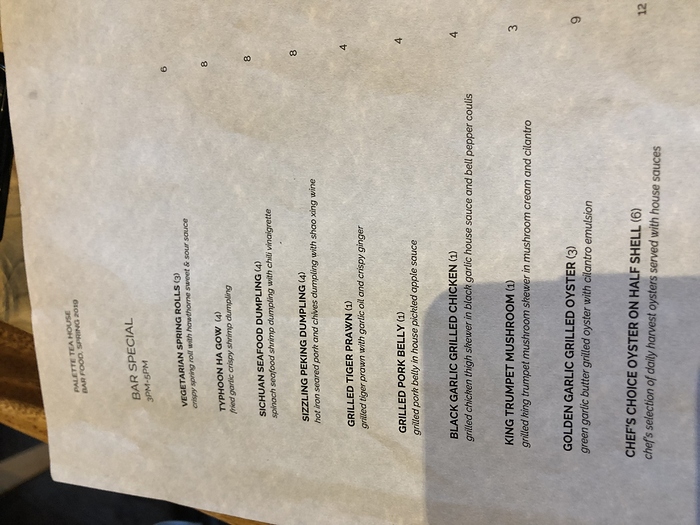 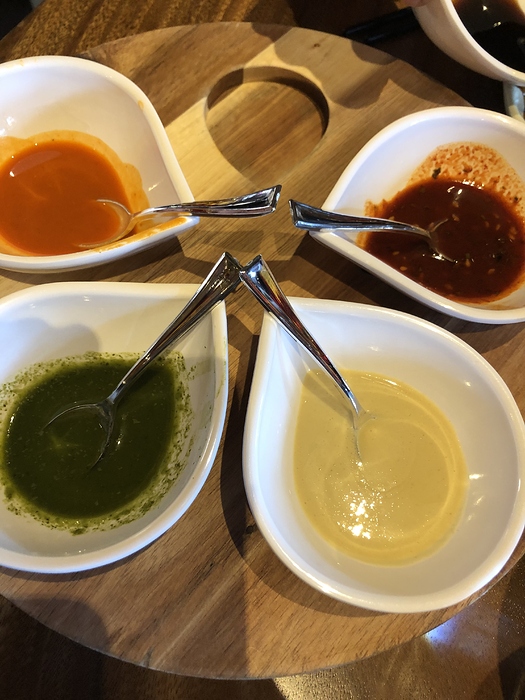 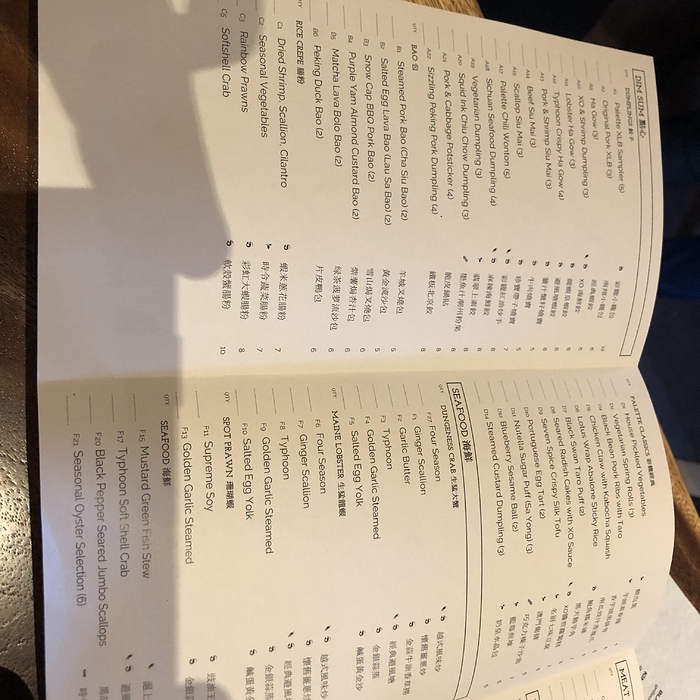 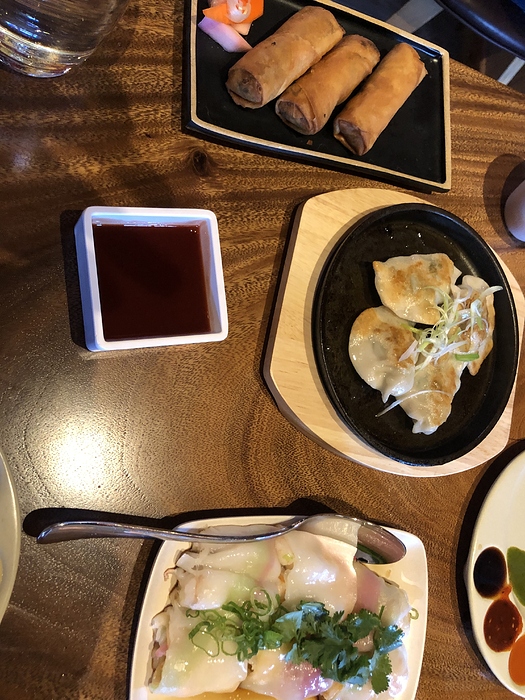 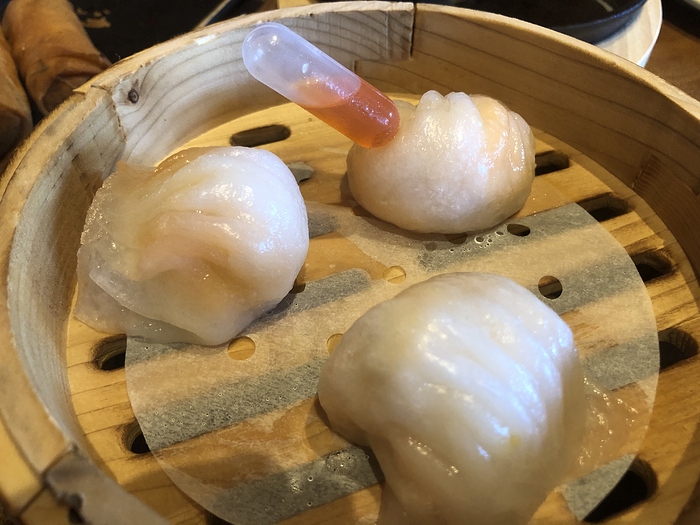 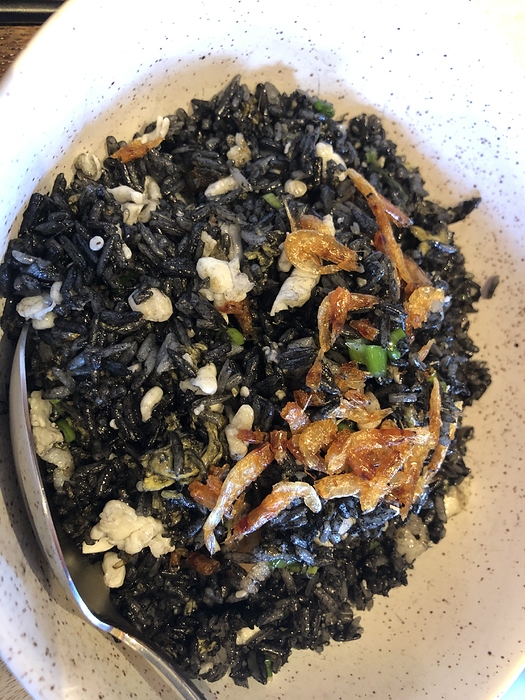 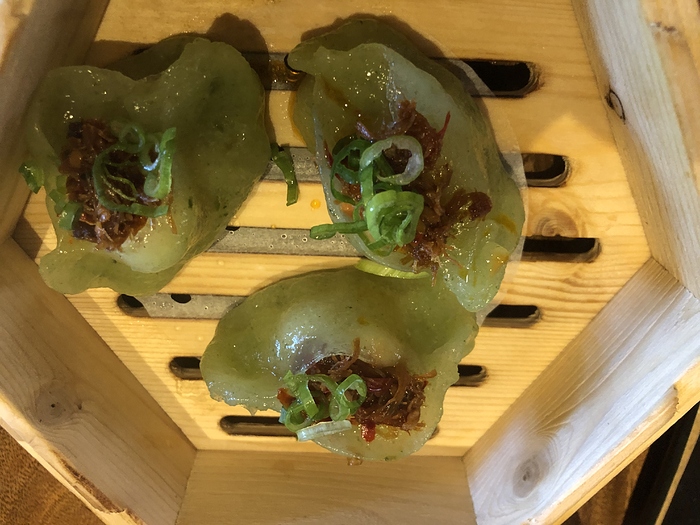 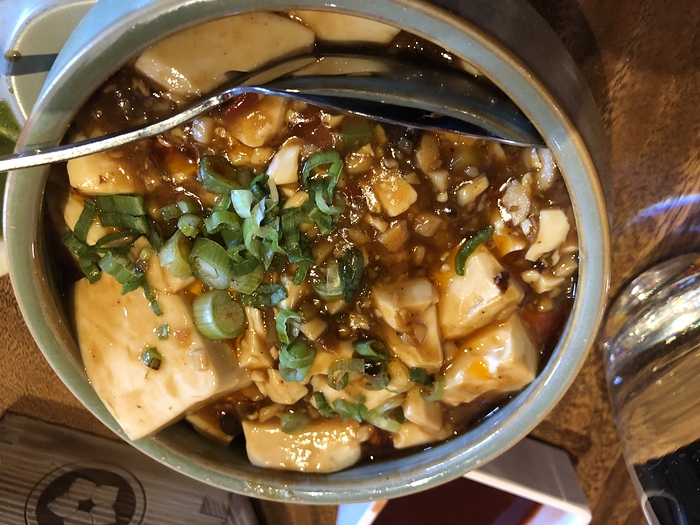 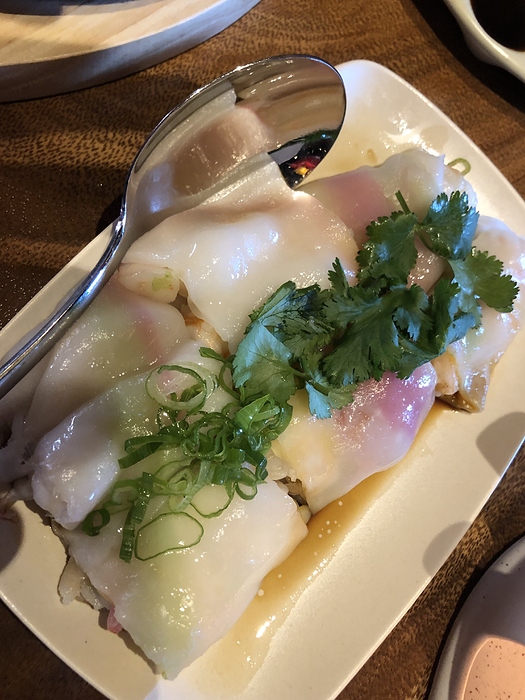 Palette Tea House, Ghirardelli Square, SF
New dim sum place from the Koi Palace/Dragon Beaux folks right in the thick of it. Dodge the tourists shivering in shorts lined up for hot fudge sundaes and continue to the center of the square then make a left. Large modern space with exposed brick walls, stylized red Chinese lanterns on the ceiling. Oyster shucker and tanks holding live lobsters at the entrance. Greeted by seemingly every member of the staff before we even sit down - definitely more service oriented than any dim sum place I’ve been to. Instagram friendly style of Dragon Beaux’s offerings times 2. They first bring out 5 different sauces - Chinese mustard, 2 hot sauces, cilantro and soy, and tell you to spoon them into the the spots in your plate/palette. But the palette is designed to hold just 4 sauces, so choose wisely because they whisk them away after you have spooned them on. There is a picture menu that has no prices, and a paper menu with prices, that does not have all of the offering in the picture book but also had some offering that were not in the picture book. They also gave us a happy hour food menu but it wasn’t happy hour, so maybe that was just for the drink menu on the other side. We marked what we wanted on the paper menu but I’m not sure if this was the correct procedure since the server didn’t give us any pen [when I asked if was had breached a protocol her answer was not really responsive, so I’m still unclear]. The lobster ha gow came with an injector filled with lobster essence that you squirted into each one. Squid ink fried rice with dried shrimp was good. Mapo tofu was super silky but mild spice. Prawns in the rainbow prawn crepe tasted super fresh but otherwise unexciting. Everything was solid, but nothing really stood out or made me want to rush/come back. The flavors were mostly pretty muted. Sterno under the tea pot was a nice touch. 18% included in bill to cover service charge and healthy SF mandate. About half full at Friday peak lunchtime.

thanks for the report, I was very interested in trying in, now not so much. Did you take a picture of your bill? How much were the dishes and your total bill?

For two if us it was $88 all in, tax, tip included, etc. and I brought home some fried rice and mapo tofu. I posted a [bad] picture with the dim sum menu prices. Dim sum pricing seemed average. The table next to us had some whole crab dish and I think I overheard them say it was $60. I’m curious to hear other opinions. We didn’t order any baked goods or xlb so can’t speak to everything they were serving.

$50-60 for a whole crab sounds about right for many SF based restaurants.