I have a craving for an oyster dish I used to get at Elliott’s (Seattle). But I no longer live near the coast (now on the west slope of the Sierra Nevada), and because of this I buy all my seafood frozen… but you can’t freeze oysters, right?

The seafood counter at the local Safeway sometimes have what they call “BBQ shell Farmed fresh”, but they look pretty awful. Very rarely do they have live Pacific oysters (I mean very rarely).

So for those of you that don’t live near the coast, what do you do for fresh oysters?

Mix flour, salt and pepper together. Heat cooking oil until very hot in a flat sauté pan. Dredge oysters in seasoned flour, shaking off any excess, and place in the hot oil.

Cook oysters until edges start to curl. Flip the oysters over and continue to cook until crispy and golden brown. Remove from heat and drain. Serve immediately with warm Jack Daniel’s Sauce.

Blend together all ingredients in a saucepan and heat until the sugar has melted. Serve warm.

we can get Chesapeake Bay shucked oysters “fresh” in pint jars - “select” size - about 20-22 per pint. raw, not cooked, not sterilized, not pasteurized . . .

being perishable with a relatively short shelf life, I suspect not too many mega-markets carry such a product.
any fish mongers in the area?

there are canned oysters - never touched a can or used one, so no clue as to how ‘good’ they are.

any raw bars in the area? or restos that ‘specialize’ in such?
perhaps a little smoozing may reveal a local source that is buying/shipping in fresh oysters in bulk and may part with some…?

There is one spot down the hill (Placerville) that claims they have them on the half shell, but I have been there a couple of times years ago and their food was yuck.

Other than that it is a one hour drive to Sacramento for a good seafood restaurant, and I have no idea if there is a decent fresh seafood store there, nor would I be willing to make that drive.

Where are you getting them in jars? and how good are they? I ask as Safeway has these… https://www.safeway.com/shop/product-details.186900071.html

But have no idea if they’re worth a damn.

mine from our fish monger - 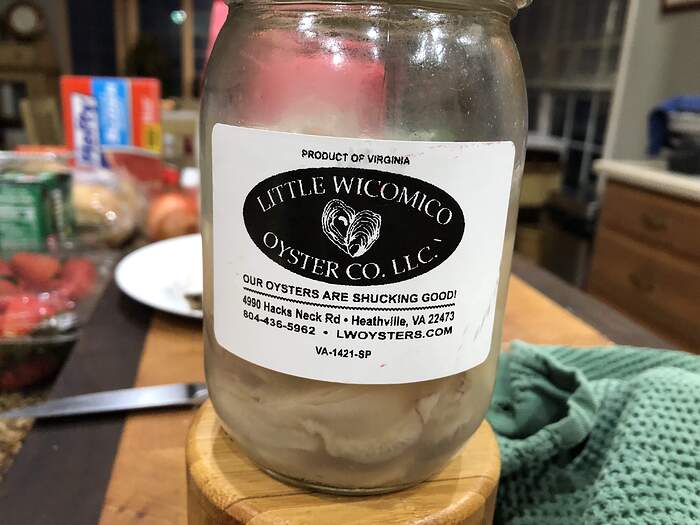 I just bought a 16 oz. jar like this to use for my Thanksgiving oyster dressing. $18.99. I live on Cape Cod, and we are rich with fresh oysters, but this is the way I buy oysters at Thanksgiving…

Check to see if they have Minterbrook jarred oysters. This oyster farm is near me in the Puget Sound area, and their product is very good. Also recommended is Hood Canal Oysters. They are distributed to other states, but whether they have them at your Safeway, I don’t know. We have them at our local Safeway, and I do like the fact they come in different sizes. They’re refrigerator stable for at least a few weeks I think, but will deteriorate even if unopened, after time. Good luck.

I agree w/Happy Onion - give 'em a try. Check for a ‘use by’ date and look at the product to see if it looks good and is a good size for your recipe.

The canned oysters are desperation worthy buys only. Just look in the refrigerated meat and fish cases for some in see thru glass or plastic containers. Is Safeway the only store you have?

WM here used to carry these:

but don’t seem to have them any more.

I’m in Houston, 50 miles from the Gulf of Mexico, with several oyster houses supplying local fish markets and restaurants and this is what WM shipped in. I tried some; they were okay but I’d rather have had Gulf oysters. Also I’ve never had Pacific oysters on the half shell so I don’t know how they stack up.

I remember reading several years ago, after the BP oil well blow-out when the oyster population here was harmed, of some processor in Louisiana working on flash frozen oysters. Haven’t heard anything more but you might look online for developments.

Interesting that back “in the old days” fresh oysters were readily available in Placerville, even making it famous.
I guess it’s just diminished demand that precludes having a supply today,

These jarred oysters are available at several levels and at supermarkets, fish markets and Asian markets. I’ve tried them from several sources and found them larger than I like, not consistent in size within the jar, usually fresh enough to not poison, friable, but given any other option, I go for it.

on their way to the slopes.

I (technically) live “in the Bay Area” but I ship mine from here. 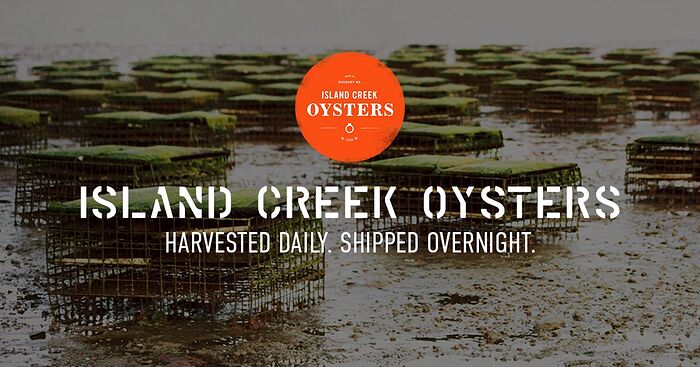 Not a fan of bridges and parking. I do see fresh and pasteurized in an Asian market.

Looks like Oyster Island is shipping retail now too! 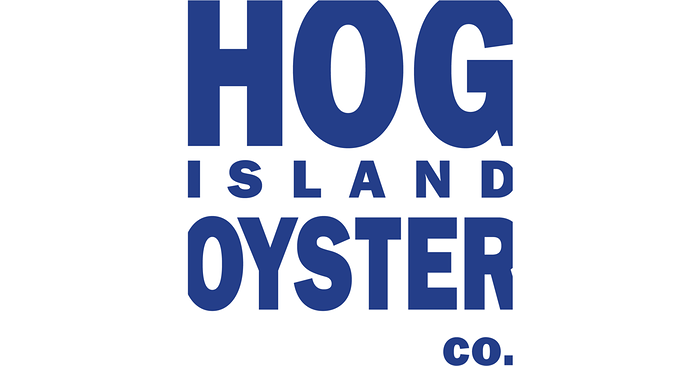 Thanks everyone! I’m hesitant to buy the jarred ones. Not only are they too large, but my experience with oysters are “the fresher, the better”, logarithmically.

So I’ll hit up one of the Morro Bay shops and I should be able to throw this dish together for under a hundred bucks! (for a $16 restaurant starter - LOL).

Actually, at that price, I’ll bookmark this and come back to it another day when my craving becomes more severe. (c;

BTW… GIovanni’s also has calamari steaks which I have sorely missed since a local restaurant closed shop.

I’ll bookmark this and come back to it another day when my craving becomes more severe.

Online, enticed by free shipping! OMG! I’ve bought a few dozen before, but not sure what I was thinking.?!!?! I bought |2 DOZ.|Grassy Bar Oysters |2 DOZ.|Kumamoto Oysters |2 DOZ.|Kusshi Oysters I am in No Cal, and they’re coming from the Central coast. I like them raw, and will probably eat a dozen of each that way,but could use suggestions for how to extend my feast over several days. For example, last time I found it important to store them with the deep part down or they might be dry. …

Ha Ha… six dozen. It’s just me and the occasional girlfriend! And Giovanni’s requires a $300 order for free shipping!

I’m gonna figure out what I want from them up to ten pounds and pay the thirty bucks. But some I’ll want fresh, and others I’ll want frozen… so not sure how they would deal with that.

All six dozen were for me! Sign up for the email list so you will hear about the free shipping offers.

Hmmmm…I thought it was Giovanni’s and that it was free shipping in California that time, and I spent $189.00 according to a receipt around that time.

I thought it was in the link, but I guess not. I’m on the Island Creek list as well.

ETA It was Giovanni’s.
A screenshot from a September email 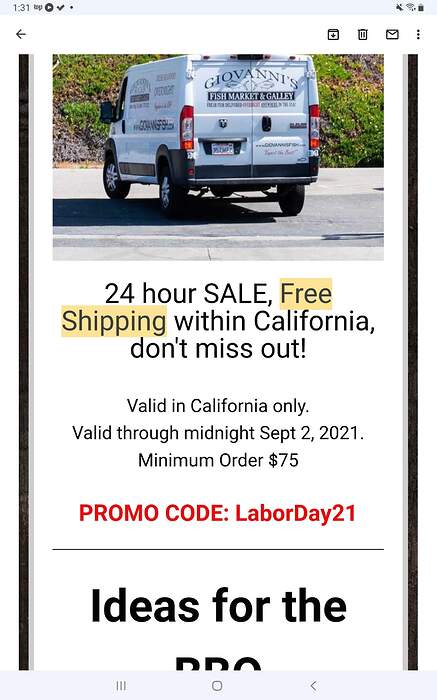 I am about to order a few dozen online. I’m wondering about any recent experience.

I’m hoping to include more info while I can still edit, but I wish I could save this as a draft before it’s "published ". I know I’ve stumbled on that option but can’t figure it out right now.

-Grassy Bar from Giovanni in Central.

I’m thinking a variety is better than 50 of the same, even if technically the shipping is less.

I may be eating these alone, or share them with someone who wants them cooked rather than raw.