This morning I decided to have two toasted English muffins or breakfast. I have a 2-slot toaster, and I’ve always been slightly peeved that the first halves go cold before the second ones finish toasting.

So I thought I’d invert the just toasted halves over the slots as the second halves toasted. Worked great. In fact, _untoasted _ones straddling the slots actually toasted acceptably. Why didn’t this dimwit think of this before?

Anyone else do this with a toaster? What similar hacks have Onions come up with?

You mean you don’t eat the first one while the second is toasting?

Only if it’s a Nutella morning.

My mom’s trick:
Pour the first half cup or so of tea water into your mug and swirl around, let sit while taking out your teabag and such. Empty mug, and then make tea.
This warms the mug a bit so the tea stays hot longer than when added to a cold mug.

When browning batches of meat pieces for a braise, invert the lid of the Dutch oven, using a small bowl to cradle it. As the pieces brown, put them onto the lid instead of dirtying a platter or other vessel.

Exactly what I was thinking…

Or try this…melt some butter in a pan over low/medium heat and place all the English muffins in the pan and toast similarly to a grilled cheese!! Yummy and buttery!!!

I have a 2-slot toaster, and I’ve always been slightly peeved that the first halves go cold before the second ones finish toasting.

I use a counter top oven, it actually gives better control as I prefer lightly toasted, and has greater capacity.

My countertop is big enough to hold my baking stone and also has convection with capacity for a prime rib or 12 lb turkey.

As a result, I hardly ever use my main ovens anymore.

“Toaster Oven”? my mother use to have one of those when I was growing up, I always hated it!! I felt gypped that I didn’t get to “catch my toast” as it popped out of the top of the toaster. “Leggo My Eggo” was never heard in my house growing up…nope all I got was slight ding and the fear of God as I used a knife to slide the grate out to remove my toast.

As an adult I swore off toaster ovens and will never own one !!

I bought the BSO XL for a main oven at my beach house. It works well for that purpose. But it really sucks at toast–takes up to 7 minutes. My best all-time toaster was the Sunbeam T-20.

It’s a counter top small electric oven with convection, not a toaster oven.

If your “countertop small electric oven with convection” has a toast setting, it’s a toaster oven.

Oh ok I was about to lose all respect for you. I have a micro/convection oven combo which I hate. My normal oven has convection and works great, just hate using it for small things like a slice of pizza etc. so I bought the combo machine. Neither the micro wave nor convection oven work well with it.

Don’t get me started on toasters. They are my current rant.

We’ve just been touring in America for three weeks. Every hotel breakfast room has a toaster. None worked properly, failing to actually toast and doing little more than drying out the bread.

I could do a full 20 minute rant on this subject if I included the inability of hotel buffets to offer scrambled egg (to put on the dried out bread) that was other than a dried up lump of indeterminate yellow stuff.

Size matters. I have two. My small one does a great job with toast, but is too small for most oven tasks–even with convection. That’s why I call them my “toaster” and “roaster.”

More accurately, the distance from the elements matters.

The BSO XL’s distance is too great–so marginal, in fact that there should be a disclosure to the effect: “Alert: due to its size, the XL may take longer than you expect to toast bread using the middle rack position. For this reason, it is not recommended to toast breads containing no sugar in the XL.”

Distance to the elements is the most critical factor, but the small true toaster ovens heat up quicker. Also, manual controls are critical for the fussy user. I’ve learned the exact amount of time for my toast, bagels, and English muffins–mostly in the middle rack. When I bake tiny finger size potatoes, I use the convection fan.

For larger baked potatoes, and almost everything else “baked,” I use my larger “roaster” oven with convection fan–and I preheat. I rejected the Breville’s for the automation–and the compromises in design (the height) that make the sensors work as well as they do. My much less expensive Oster “roaster,” without the sensors, has succumbed to automation (though a hard-to-find manual version does exist), but I’ve learned how to defeat it. 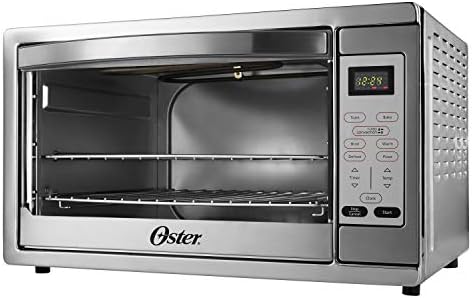 There is no such thing as a “true” toaster oven. The species has merely evolved to include larger capacities, fans, etc.

I’m with you on the automation, especially the programmed times. I’d be happy with “Broil” and “Bake” modes, a fan switch, a countdown timer, and a “stay-on” switch.

If your “countertop small electric oven with convection” has a toast setting, it’s a toaster oven.

Oh ok I was about to lose all respect for you. I have a micro/convection oven combo which I hate. My normal oven has convection and works great, just hate using it for small things like a slice of pizza etc. so I bought the combo machine. Neither the micro wave nor convection oven work well with it.

You may call it what you will, but it works great.

Perhaps the single most useful appliance in my kitchen.

Both my bagels and prime rib turn out perfect every time.

And it is extremely energy efficient.

That’s the one I have. As you say there are some compromises with settings.

If I could find a same size commercial unit with better insulation and more precise temperature controls I would buy it.

As they say, it’s not the size of the unit, but how you use it that counts…

Oh nonononono… don’t ever eat the “scrambled eggs” on hotel breakfast buffets (unless you’re at the Ritz or something). I suspect more often than not they’re actually scrambled rehydrated powdered egg.

I’ll spare you my rant on hotel coffee machines…