The Froot Loops thing IS pizza, as far as a basic definition of pizza goes - but it seems like it’s supposed to be taken as a joke. I wouldn’t like it, but I’m sure someone would. Someone who got really really drunk last night, and might still be drunk now.

And that might be how it got invented, too.

That doesn’t seem to be any kind of pizza.

Either Barca is in the wrong thread, or her post meant exactly what you typed.

The apple pie pizza that was part of the pizza lunch buffet at Pizza Hut in small town Montana was tasty. I know someone who makes a sugar cookie pizza, topped with fresh berries in the summer.

I only have eaten Italian food in Italy, but I did see some stores selling American foods in Rome- which would be a novelty for some Europeans.

To me that is more like a super sized cookie. I recognize dessert pizzas are a thing. So are supersized cookies. A dessert pizza for me would be figs, lemon, burrata, even salad pizza as a course…not candy.

One food I can remember seeing is burgers. Of course on our visits, eating the food of the region is a big draw for us so we never check out what Italians are doing with burgers.

If it’s actual pizza-type bread underneath and has candy on top, you kind of have to admit it’s technically pizza. If you said it became a cookie, that would just be disrespectful to cookies.

Maybe there’s a prejudice that if something is a really bad idea then it can’t be allowed to be pizza.

It won’t be on my dinner table no matter what I call it because it doesn’t appeal to me. I see you point.

As with pizza, the definition of “burger” has required basic elements but there’s a lot of variation possible - it takes some doing to aim for “burger” and mistakenly end up with “really not a burger”. But I can imagine they might have some variations that would surprise a North American anyway.

If the word pizza comes from Greco Turkish pita/pide which means pie … maybe anything goes .

I don’t buy into this “actual pizza” concept . Lol.

I wonder how Pop Tarts might be subverted. El Bulli style?

As far as that actual feeling that something has been messed with though, I think of American regional specialties, the ones that even “at home” can become a bit contentious. I’m sure some of those are famous enough that they’ve travelled to other continents and become a bit “translated”.

The Cuban guava empanadas in Florida are deelish.

When we toured Russia, they asked us to bring PopTarts.

or, if you don’t feel like making your own and find yourself i boston’s south end, the alsatian from picco: sautéed onions, shallots, garlic, creme fraiche, bacon & gruyere.

the best since i’m guessing their oven is way hotter than any home oven. and since picco is an acronym for ‘pizza ice cream company,’ you can pick up dessert while you’re there.

I think “not actual pizza” is one that isn’t a flat bread baked with optional items on top. We don’t know where that word was used before Greek was spoken, or what it meant before it meant “pie” - but we can observe how people use it now.

You’re right that in some way if I bring you spanakopita, or American-style apple pie, and I say “this is a pizza”, there could be some legitimate confusion - but I doubt it. And anyone who wasn’t expecting a lesson in Greek (or wasn’t Greek themselves) would immediately say those are not pizza.

Words in any language might not mean what they originally meant in a different language.

Something like that, yes. The secret to copying Pop Tarts is sourcing the same brand and thickness of cardboard that they use for the crust.

I’m not sure if you live in the Greater TO Area. The Bake Shoppe’s pop tarts are the high quality cousin of Pop Tarts. 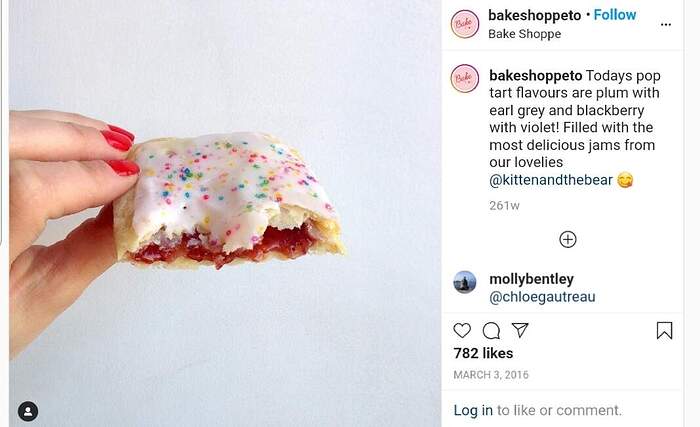 Homemade pop tarts were definitely an Instagram thing this summer. As I recall, Either @gcaggiano or his boyfriend made some really nice looking ones.

There is an enormous British, Irish, Schengen Collaborative Country Natives (Switzerland amongst others) and also an American population of legal residents in Italy as well as Spain.

Amongst other Northern Europeans and thousands of students and Tefl (Teach English foreign language) teachers living throughout The European Union.

I’m trying to find a picture of it, but it was all him. Delicious.

I’m not sure if you live in the Greater TO Area.

[scanning the map] Only if it’s grown again since the last round of amalgamation … it appears probably not though, because I suspect I would have heard the news sequentially from people in Thunder Bay, Winnipeg, and Calgary, before Toronto expanded as far as Vancouver.