[Newark, CA] Cloudland Rice Noodle 雲家鄉過橋園- Is the 2.5 Yelp stars ‘cross the bridge noodles’ worth crossing the Dumbarton Bridge for?

I’ve been meaning to go to Cloudland Rice Noodle for the longest time because of their chef’s connection to Yunnan, but had been deterred by the miserable 2.5 / 3 star Yelp rating. Having to cross the Dumbarton bridge for the cross the bridge noodles means I prefer there is some guarantee in the food quality before I actually cross the bridge. I finally bit the bullet last weekend, and I am so glad I went.

Long story short, the cross the bridge noodle was very good. And I am glad despite the rating they still do brisk business.

Here’s one story behind the crossing the bridge noodle (or at least one of them): Hundreds of years ago, a scholar from Mengzi, Yunnan studied hard for the imperial examination in a pagoda on an island surrounded by a lake. His wife wanted to feed him nutritious and hot food during the winter, but she found out the noodles she delivered to him were already cold and soggy by the time she crossed the bridge. So she put the soup in a big clay pot, and added a layer of chicken fat on top of the soup to retain heat, and transported the noodles separately to maintain the noodle texture. The scholar asked about the noodle and the wife made up the name ‘cross the bridge noodle’. With his stomach taken care of, the grateful scholar was able to concentrate on studying and went on to place first in the exam.

Another suggestion was the compiling the soup ingredients into the soup bowl was like a bridge between two bowls, hence the name.

The owner/ chef came from Dali, a city in the mountainous Yunnan province of China, which borders Vietnam. The menu looked like its all Yunnan specialties.

The cross the bridge noodle ingredients were placed on separate plates and wheeled out on a cart. Here’s the thinly sliced raw chicken breast, ham and pork: 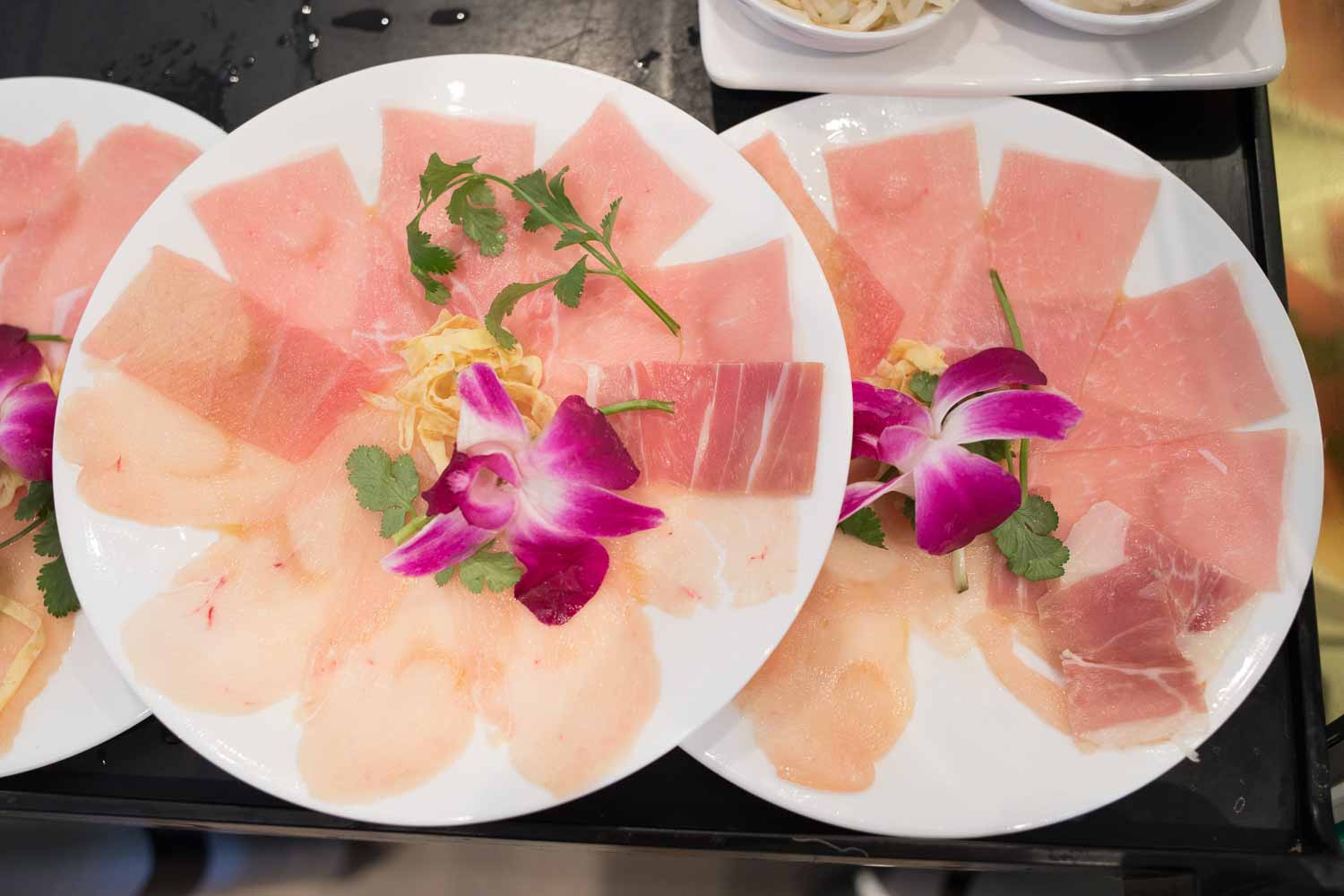 Here’s the soup. Note the lack of steam coming from the soup bowl because of the layer of fat. Despite the appearance, its scalding hot soup underneath. The rice noodle were in the back. 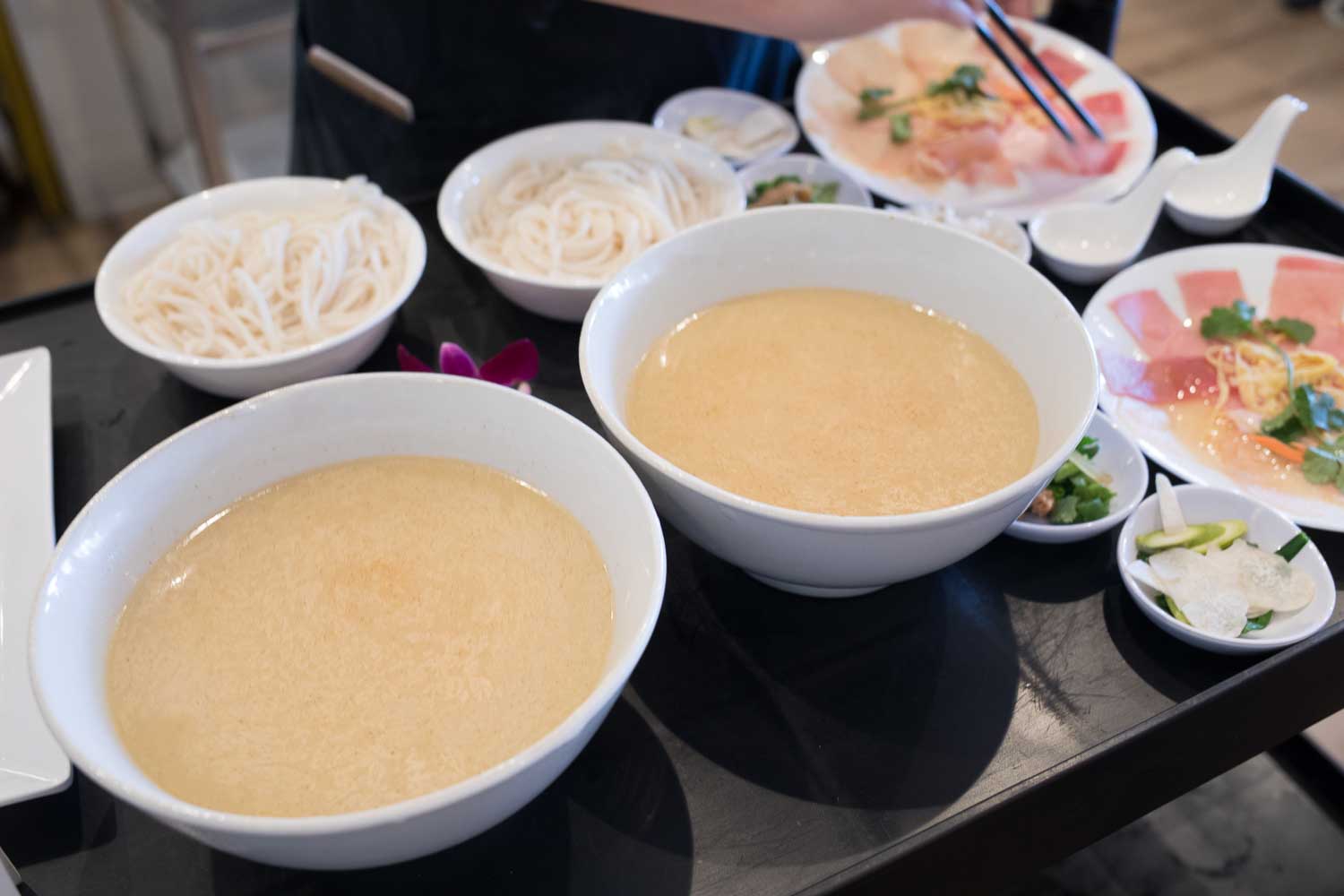 Other vegetables and herbs such as chives, turnip, pea shoots, etc, and the quail eggs. 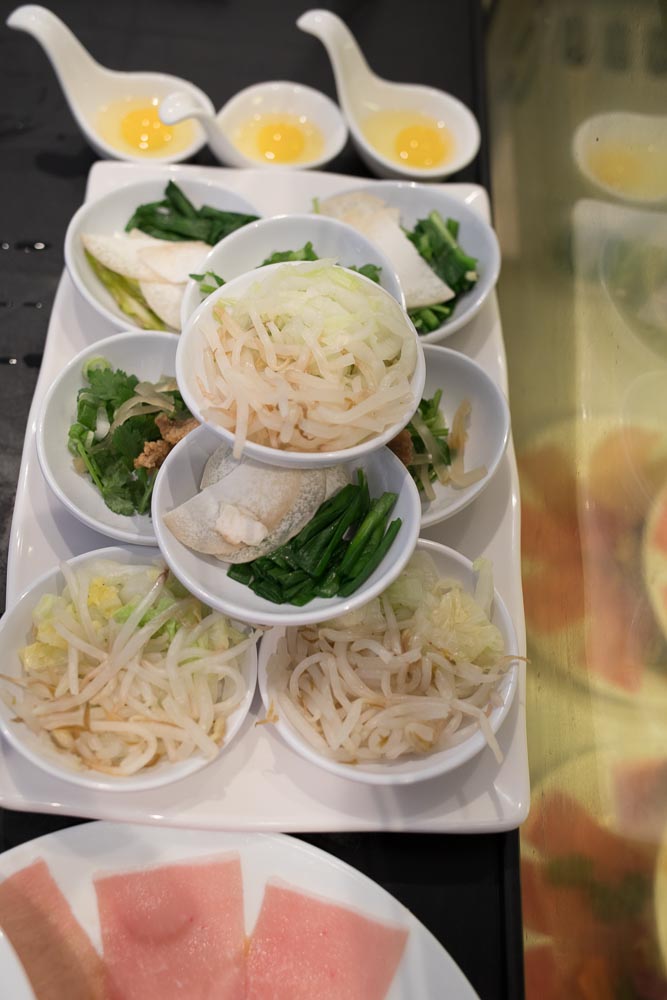 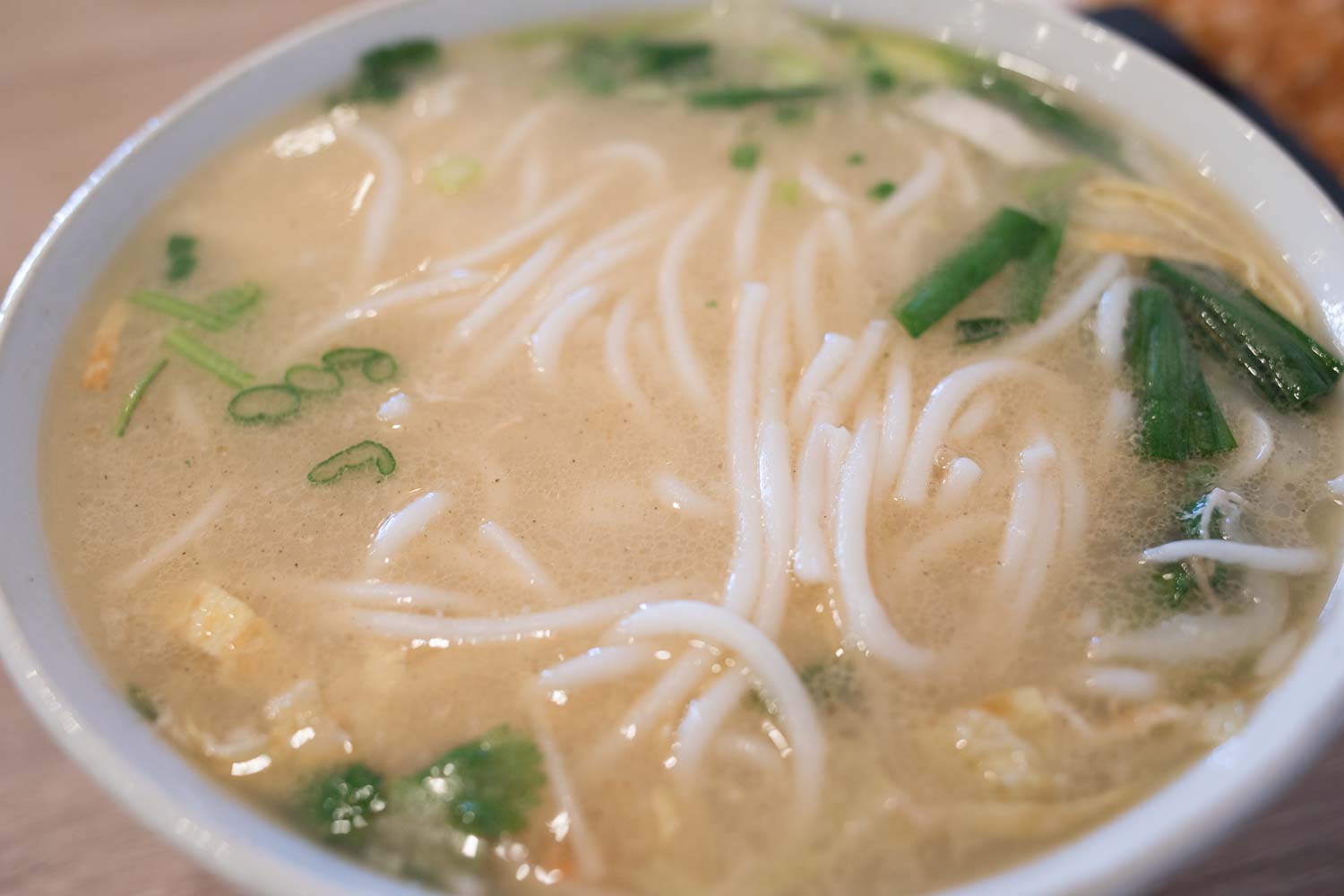 The broth was made with old ducks, pork bones and pork (or chicken, I can’t remember) for half a day. And the taste was rich, flavorful and balanced. Tasted clean and did not detect any artificial additives. They can sell that as soup and I will buy it. My wife and I ended up drinking all of them.

The meat was ok, some were cooked just right while some were a little over. It’s hard to control when they sliced the meat so thin. The ham tasted more interesting than the chicken breast.

The rice noodles were on the soft side. The star of the show I felt was the broth. 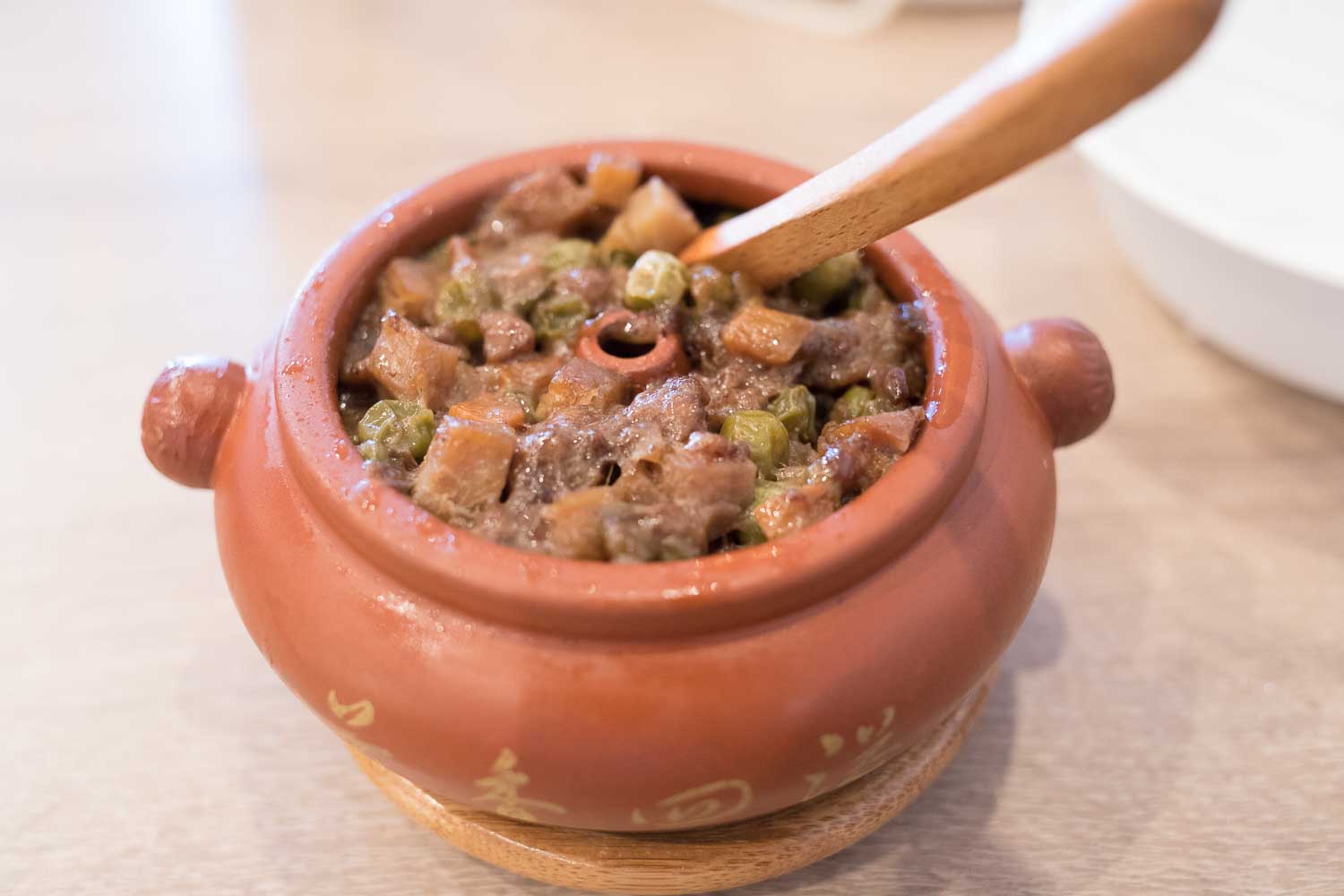 The steaming pot chicken rice came in a small clay container that had a hole in the middle to let the steam cook the chicken, taro, peas and meld the flavors. Pretty good. 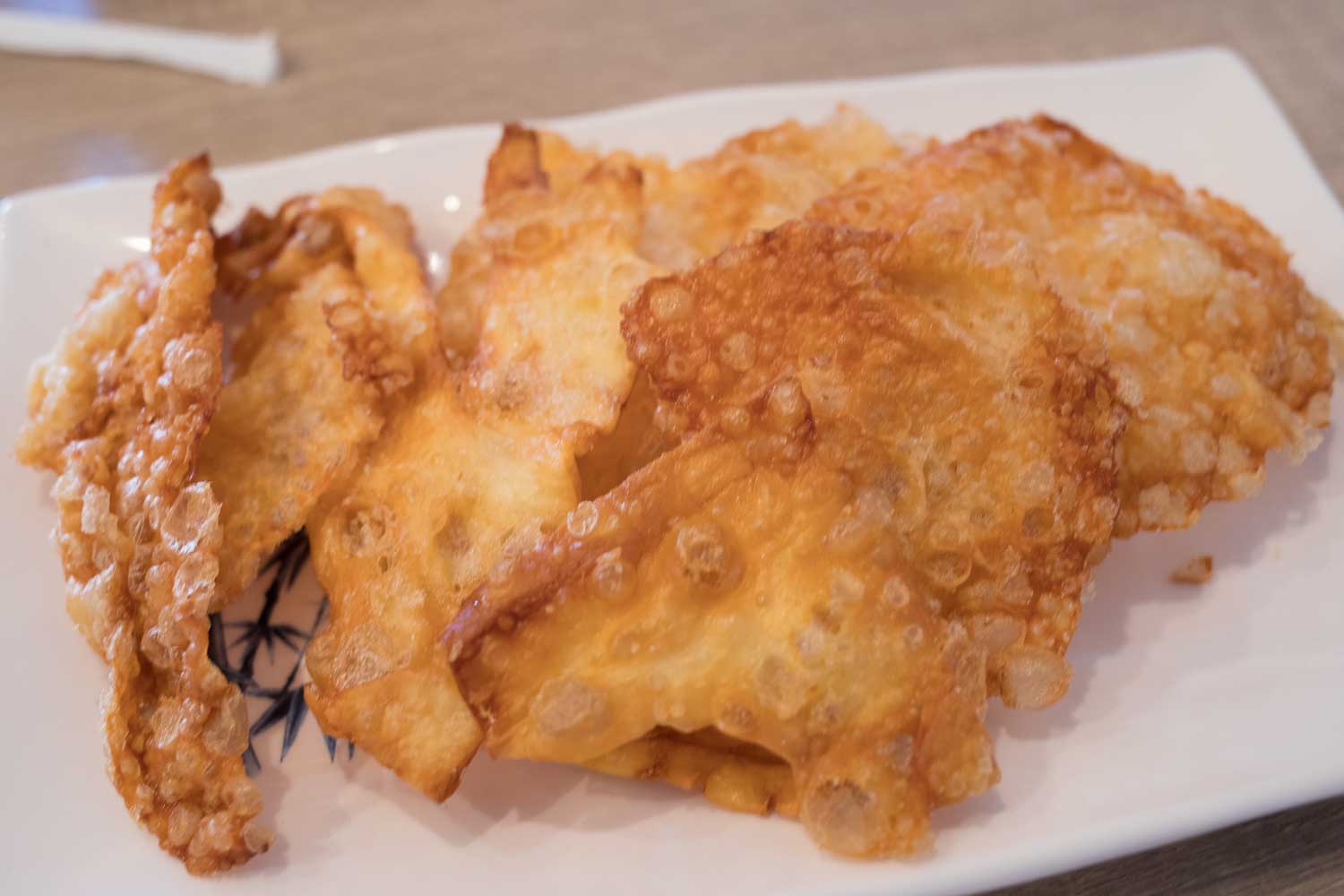 The fried dairy fan used milk directly imported from Yunnan we were told, which was mixed with yogurt, cooked and coagulated. It tasted like fried pieces of Yakult drink, which was a bit like yogurt than cheese. 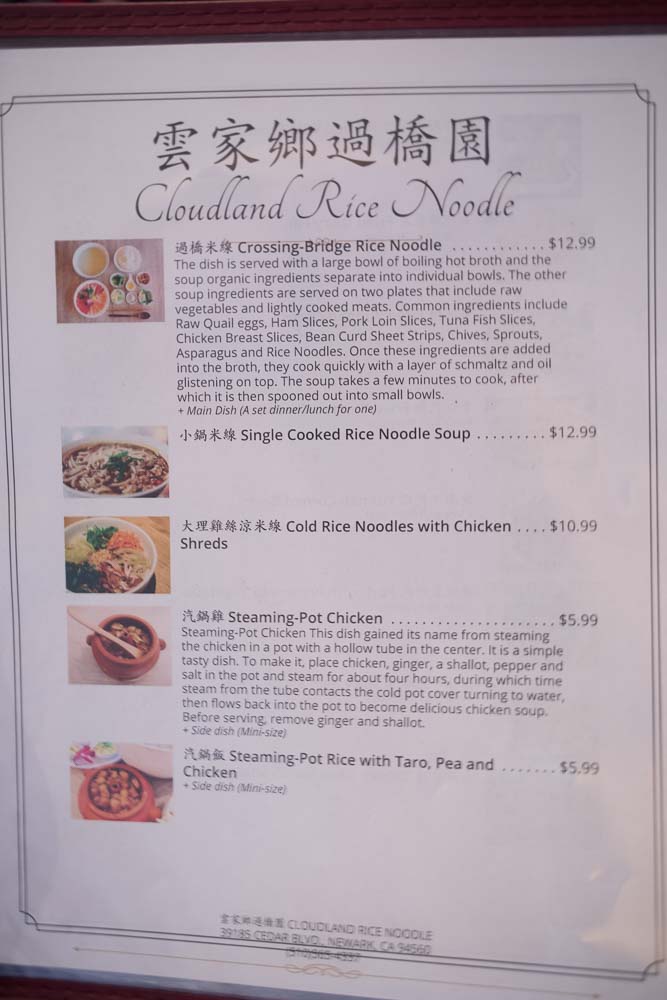 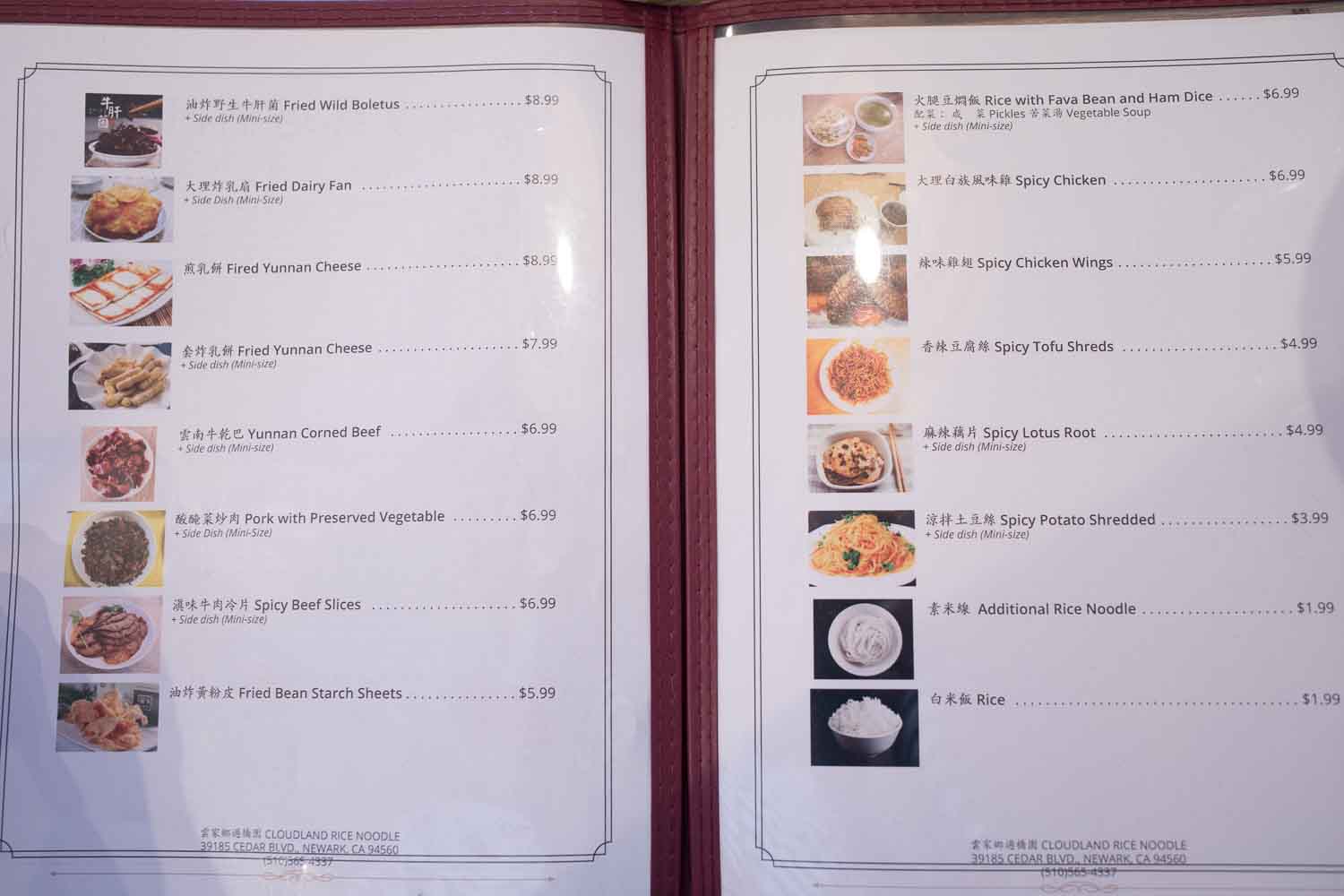 Most of the complaints on Yelp are about the small portion and prices. My understanding is that these dishes are meant to be accompaniments to the noodle, so they shouldn’t be big. Perhaps there is a bit of cultural gap that the chef owner needs to bridge with the mostly non-Yunnan customer base. Luckily, despite the low ratings, there were one or two groups of people consistently waiting for tables throughout the lunch service.

I’d definitely cross the bridge and eat that noodle again, as well as try more of the Yunnan side dishes.

Hi Sck,
I think you are one of the best bridges between Cloudland Rice Noodle and its customers!

Hmmph, I don’t know what to say…?! I presume you are related to the restaurant?