Regional Dining Discussions
All other US, Caribbean, Americas
mariacarmen (maria ascarrunz) January 14, 2020, 6:02am #1

Reporting back on our trip over the NYE week. Sadly, I got really sick on our 2nd day (bad cold, sinus infection. Still recovering, 12 days later and after antibiotics!) so i really didn’t eat as much as I wanted, but we also had a lot of bad luck with food on this trip .

The night we arrived, we tried to go to Shank - recommended by friends, and pretty close to our place. But it was closed (Mon. night). Tried to go to Coop’s – line around the block. Back in our neighborhood, tried to go to The Franklin – out of food except the burger!! By that time it was 10:00 p.m. and I wanted to see King James & the Special Men at Saturn Bar – starved, we ended up a half a block down at Junction Tavern for an ok burger and bad wings. Took 45 minutes as the poor bartender was slammed and all by herself. Wah! (show was excellent, by the way.)

Next day, we tried Shank again for lunch. Were told that they were out of basically everything until Thursday. WTF? Walked to St. Roche Market as we were close and starving – but against my better judgment. BF wanted one thing – sausage gravy and biscuits, and they were OUT of it. From Fete au Fete, I got a sampler of crawfish poutine, shrimp & grits, and gumbo yaya–they were OUT of red beans and rice. I ordered this before we knew they were out of his food, so I didn’t really want to eat without him. We had a couple bites and then left it behind, as it wasn’t all that good. I would not go back, to the market in general. Very generic vibe.

Parasol Po Boys for our early NYE dinner – I got the voodoo shrimp (they were OUT of oysters), BF got the roast beef debris. I tasted his – apologies to all, but I just wasn’t all that impressed! Maybe something you have to grow up with, but it was kinda Dinty Moore-ish to me. I liked my shrimp po boy just fine, although I think I like Parkway’s better. But excellent bread! (We spent NYE on Frenchmen, at DBA watching Cha Wah - wonderful show!)

On New Year’s Day, we went to Cochon Butcher to eat and order my meats to take home. Place was packed. I had the buckboard bacon melt (my absolute favorite), the BF had a pastrami with sauerkraut on rye - he liked it. we split black-eyed pea chili with cornbread (WONDERFUL.) and potato salad (very good). I love Cochon too, but I will always go to Cochon Butcher when I visit, just for that bacon melt.

Later that night, we had a rez at Toup’s Meatery – I ordered the full charcuterie board as my meal, the BF got the pork chop with dirty rice, we split a salad. EXCELLENT. We didn’t even make a dent in that pork chop. Took it back to the hotel and nibbled on it the next couple of days. But that dirty rice! And the charcuterie! Spicy pork rillettes, headcheese, chicken liver mousse, duck bacon, fried boudin ball, daily sausage, cracklins, and rillons. All with lovely pickly things. My favorites were the daily sausage, the headcheese, and the chicken liver mousse. Really great dinner. Would definitely go back.

We had breakfast near our place the next day at Who Dat Café – catfish bennie for me - perfectly cooked fish. BF got his sausage gravy and biscuits, finally, and a couple of eggs. Just what he was looking for. Again, would go back.

Dinner at The Franklin – unbelievably, they were STILL out of quite a few items on the menu. But the BF got a really good hangar steak & frites. My crab pasta was good, but a bit too lemony, and just not all that special. Probably would not go back.

By this time, I was sick as a dog. Spent most of the day in bed Friday, didn’t eat until dinner, and I almost cancelled our reservation at Dooky Chase, I was so sick. But we went. Unfortunately, except for the fried chicken, it was a very disappointing meal. Partly my fault. First I got full on the terrible, terrible bread – pieces of bread that looked like they were the crusts torn off a loaf, buttered and toasted, then served cold. But we were starving since we hadn’t eaten all day. Then, the BF asked our hostess what she liked best on the menu, and she said the stuffed shrimp. We’d seen how big the plate of the gorgeous fried chicken was, so I went ahead and ordered the shrimp and let him get the chicken, thinking we could share. But the BF really doesn’t do shrimp (except scampi sometimes) and i know this! And the shrimp was just awful. Stuffed with crab or maybe boudin?? I’m not sure but it was pasty and gluey, and the breading was super thick. I managed to eat PART OF ONE SHRIMP. Our salads were really basic with bad winter tomatoes, and only a sweet French dressing was offered. The BF got a stuffed potato with his chicken and that actually tasted good to me, so I had a couple bites of that. Other than that, I had a leg from the BF’s plate of chicken – and it was DELICIOUS. Really great chicken, not at all greasy, maybe better than Willie Mae’s Scotch House (but not quite as good as Coop’s or Lil Dizzy’s, to me.) I should have ordered something like jambalaya but I just wasn’t that hungry. I wish we’d gone when it was the buffet because then we could have each had a piece of chicken and just tasted a bit of the standards. Oh well.

On our next to last day, again I spent most of the day in bed, but we went to pick up Cochon meats in the afternoon. I was just out of it, so we just stayed and had a late lunch/early dinner there again. Friend had recommended the duck pastrami sliders, which were just ok – the cheese (Gruyere) was dry. BF got the chili again (so good), and arancini stuffed with sausage & salami – delish. Also the mac & cheese, very tasty.

On Sunday, our last day, we checked out and headed to the FQ to pick up muffulettas at Central Grocery, and found that Coop’s had no line for the first time all week! We got the Taste Plate with an extra piece of chicken. I really adore Coop’s fried chicken. The seafood gumbo was very tasty, although some of the seafood in it was still cold. RB&R with sausage was good, shrimp creole was just ok. The jambalaya, which I had loved so much last time, was kind of sweet, and I didn’t finish it. but that chicken! I’d still go back for the chicken and the redfish meuniere.

We had hours to kill before our flight, and happened by a very cute, newish bar in the Quarter – Longways on Toulouse.
https://www.longwaytavern.com/
It was almost empty, so we sat there for the next 3 hours or so and nursed our cocktails (yes cocktails! i was sick, not dead!), and then split an order of their charred broccoli with horseradish gremolata and bacon, which was really tasty. I’d go back there again - place had a nice, mellow vibe (especially compared to everything else in the Quarter) and a sweet patio in the back.

For drinks we mostly went to dive bars at night in the Marigny. i had quite a few very good Sazeracs at different places, too.

I’m not done with NOLA yet. Need a do-over! Next time with my sister, who eats everything. 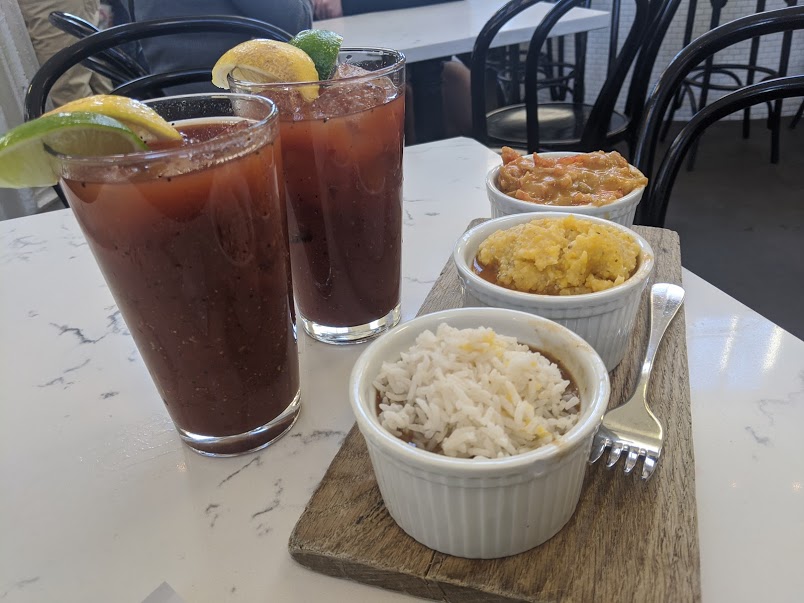 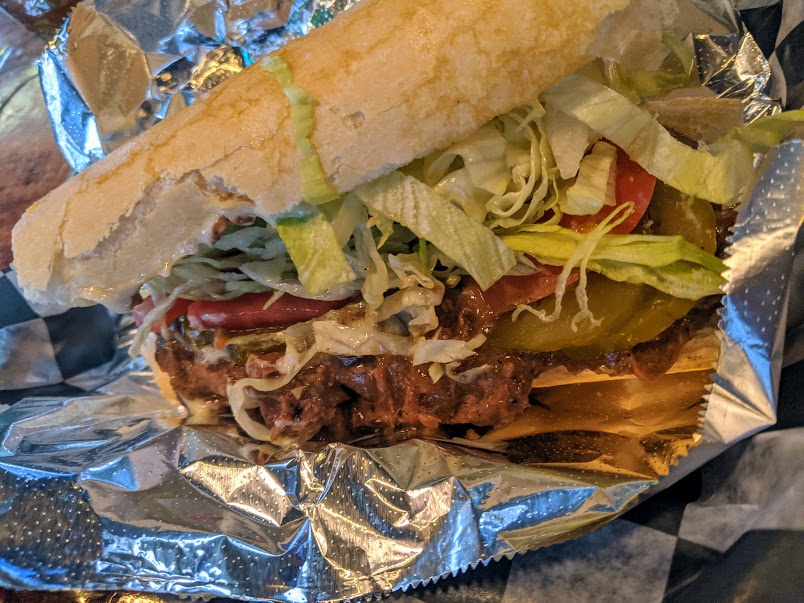 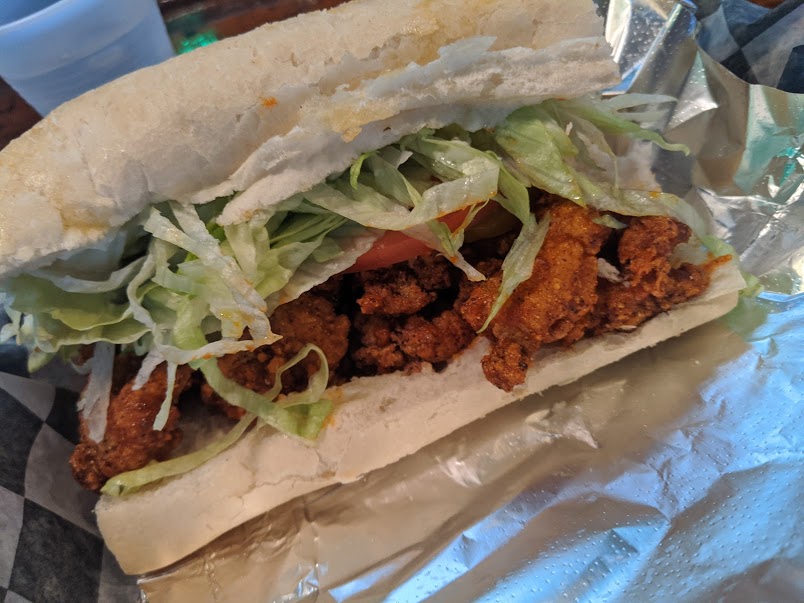 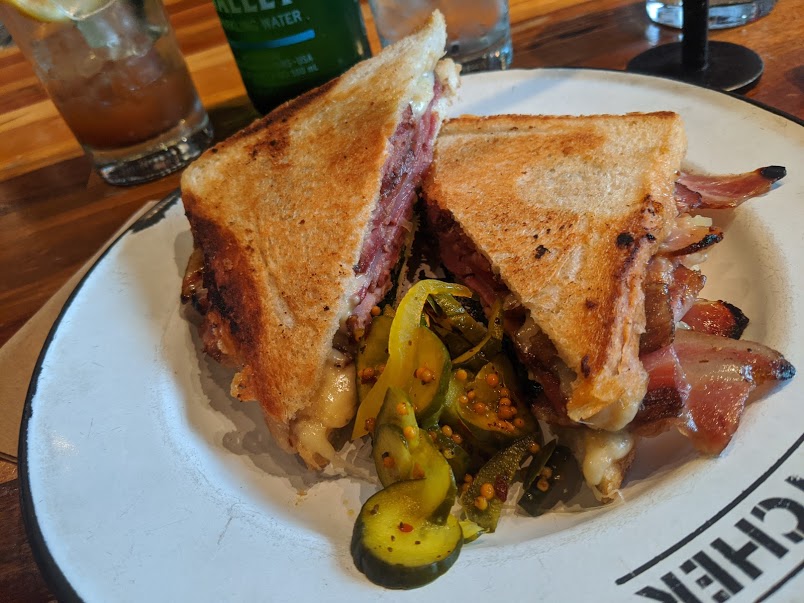 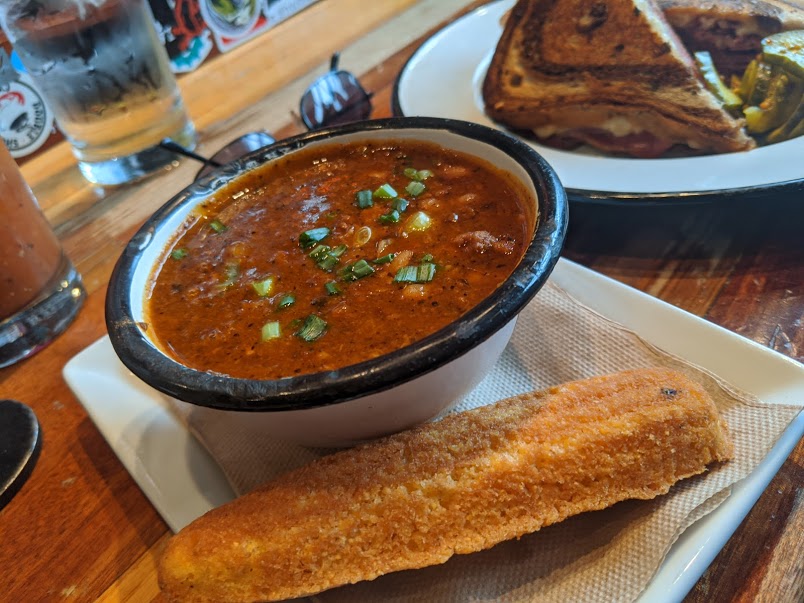 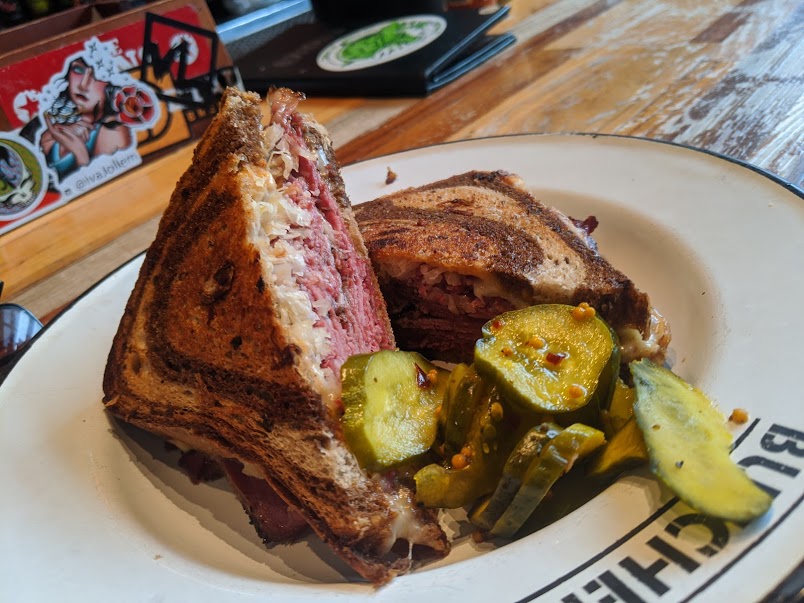 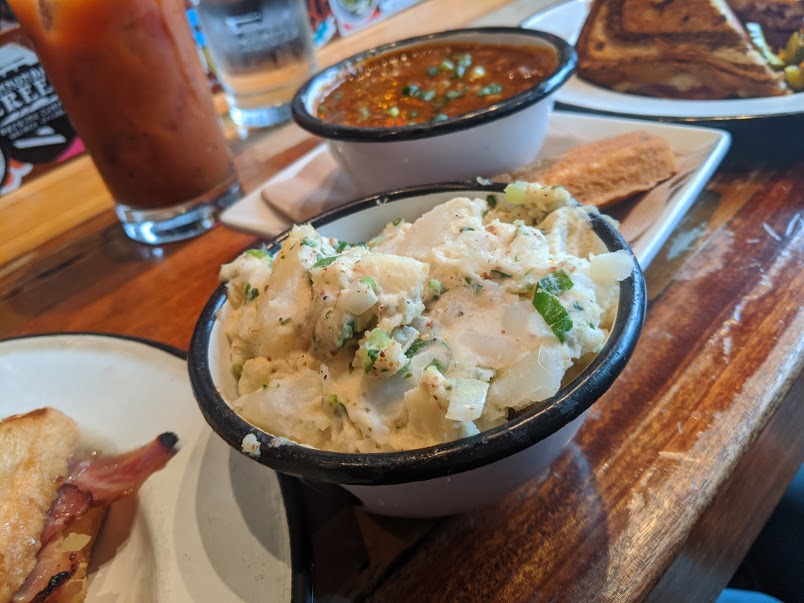 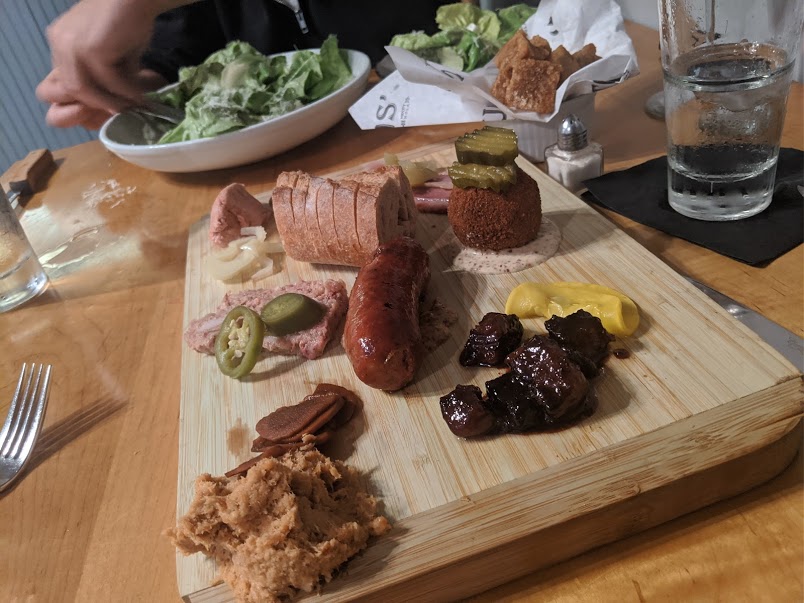 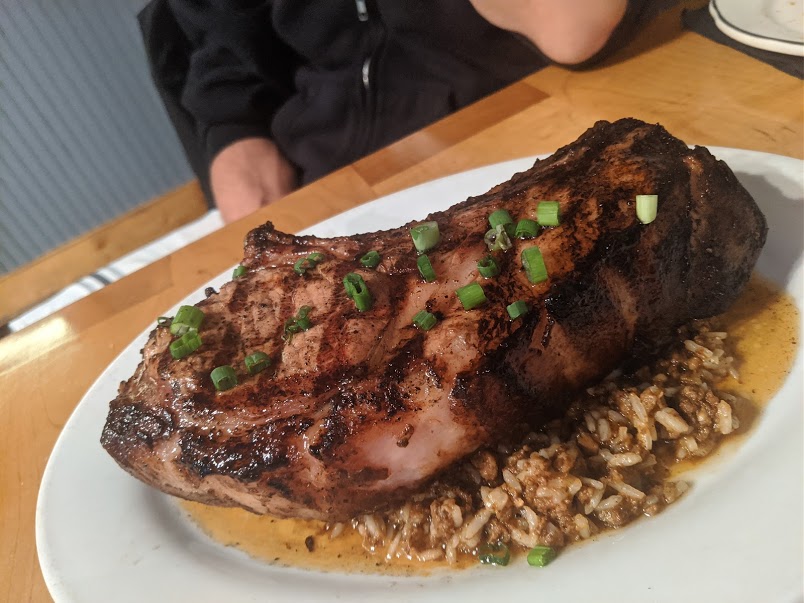 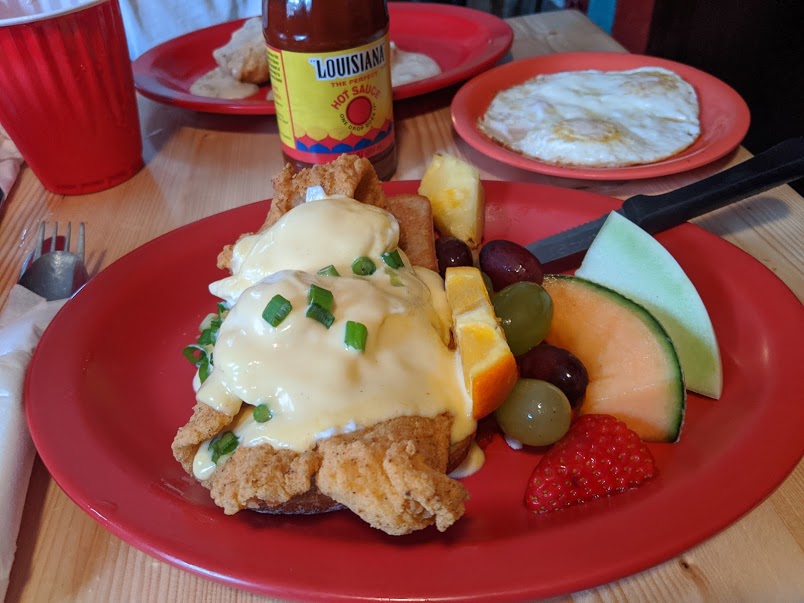 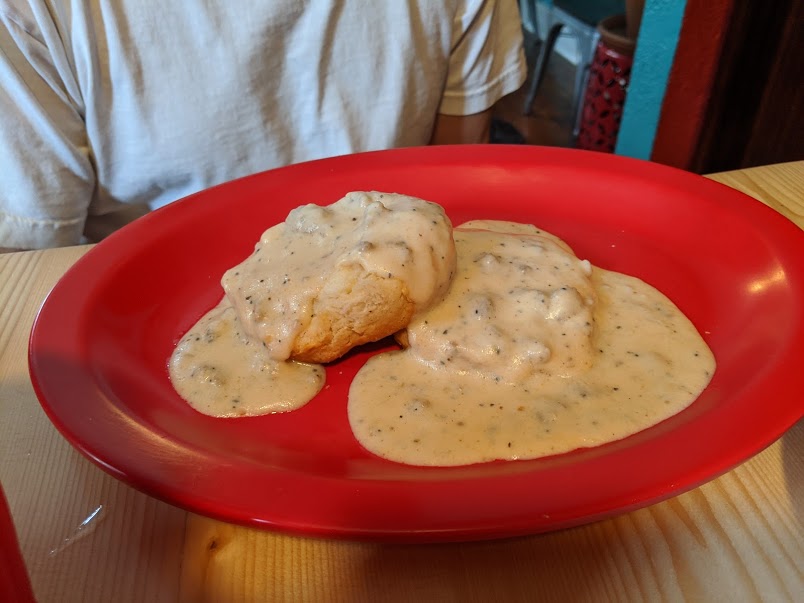 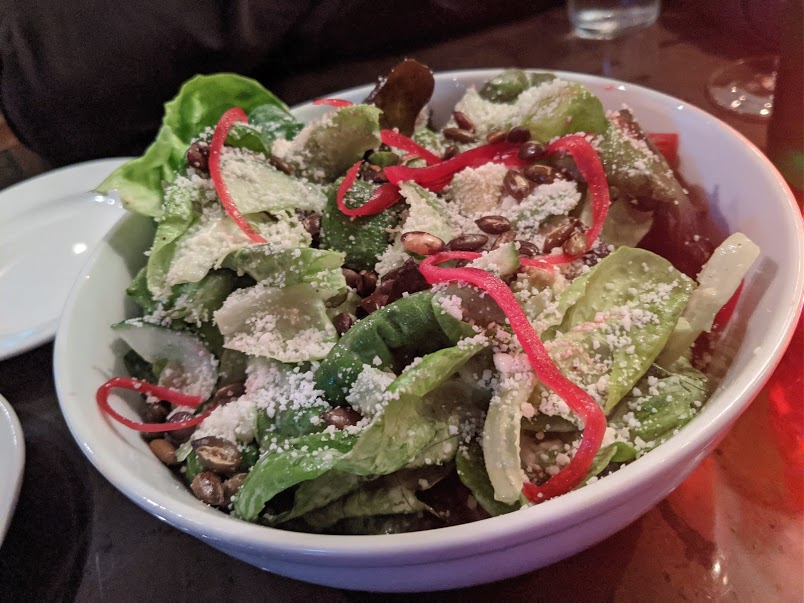 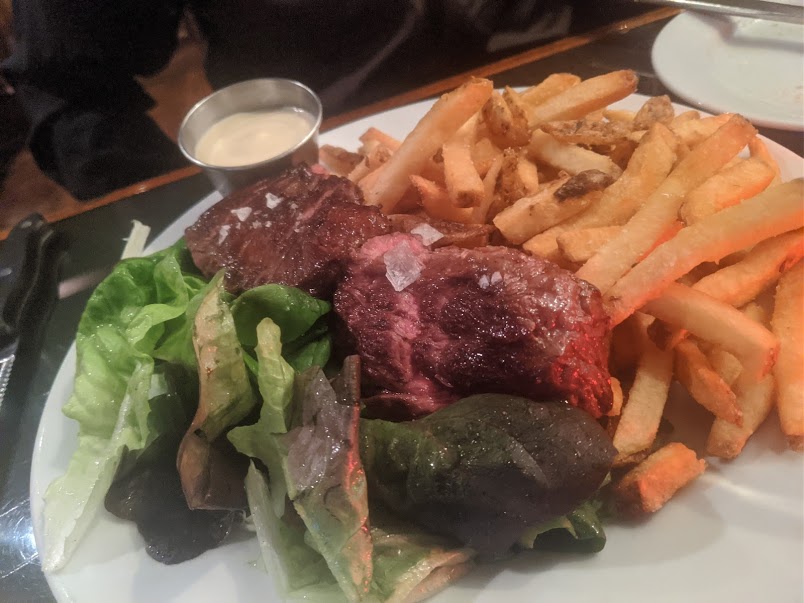 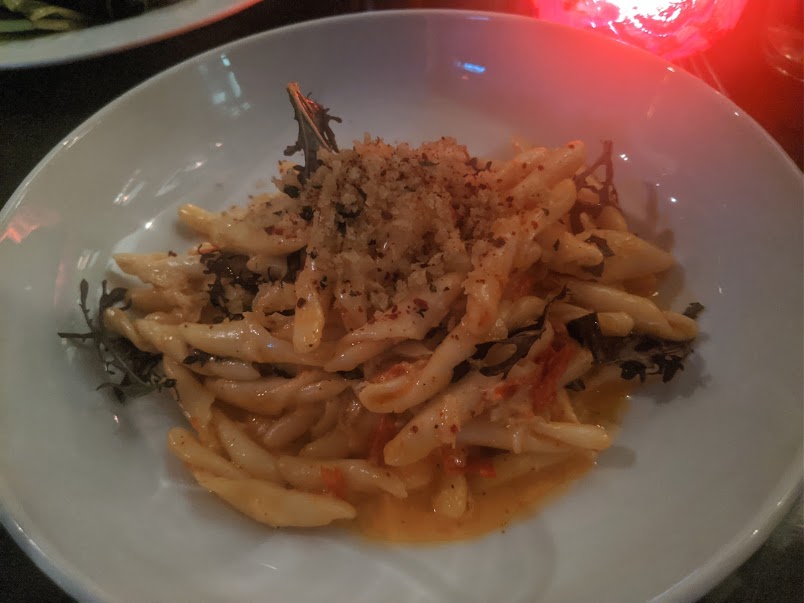 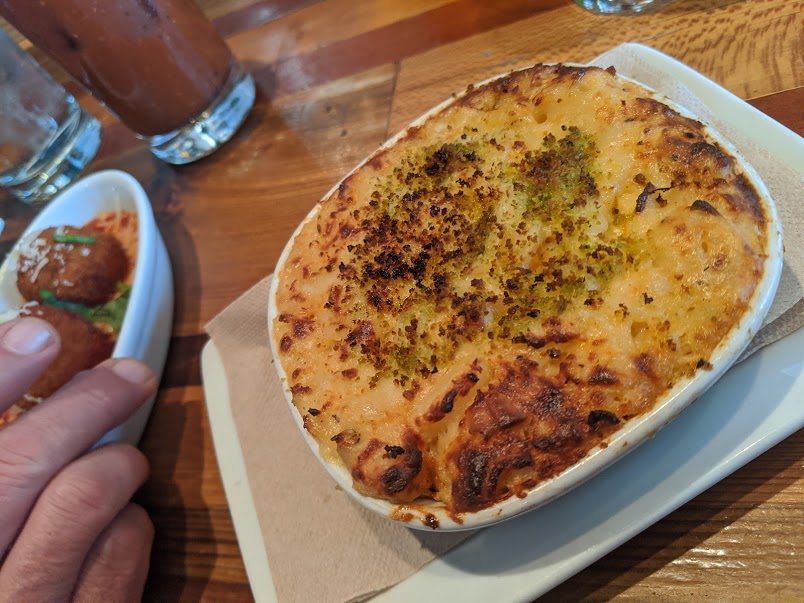 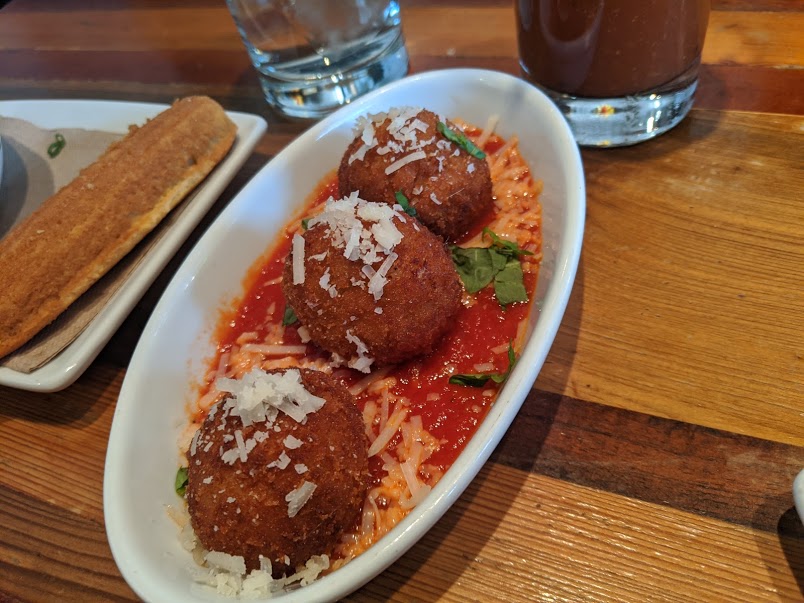 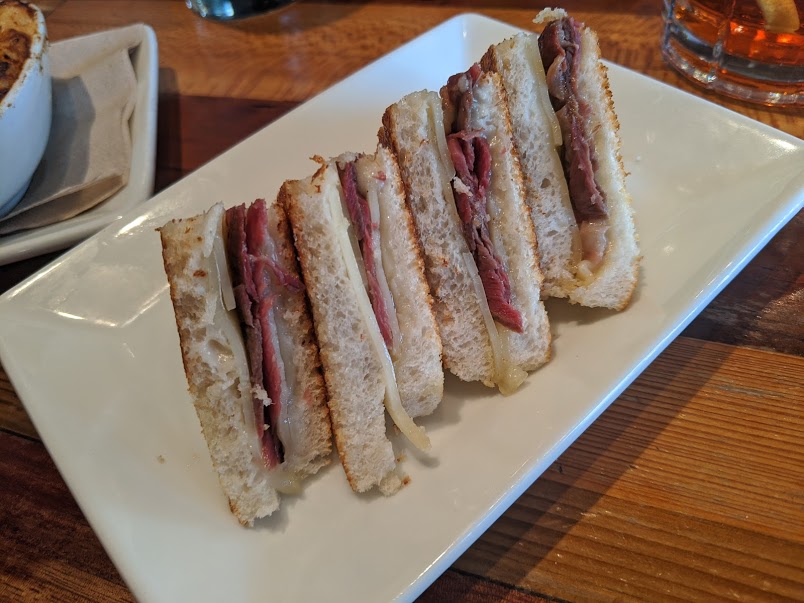 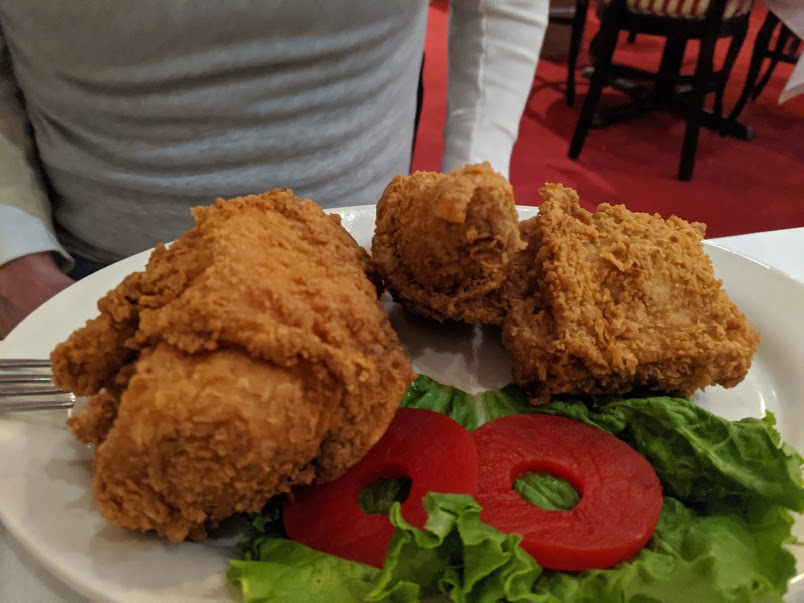 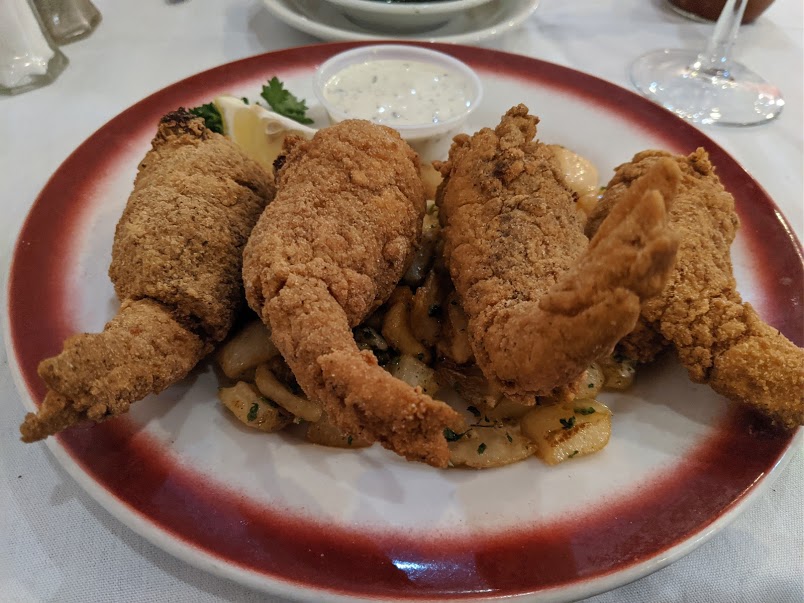 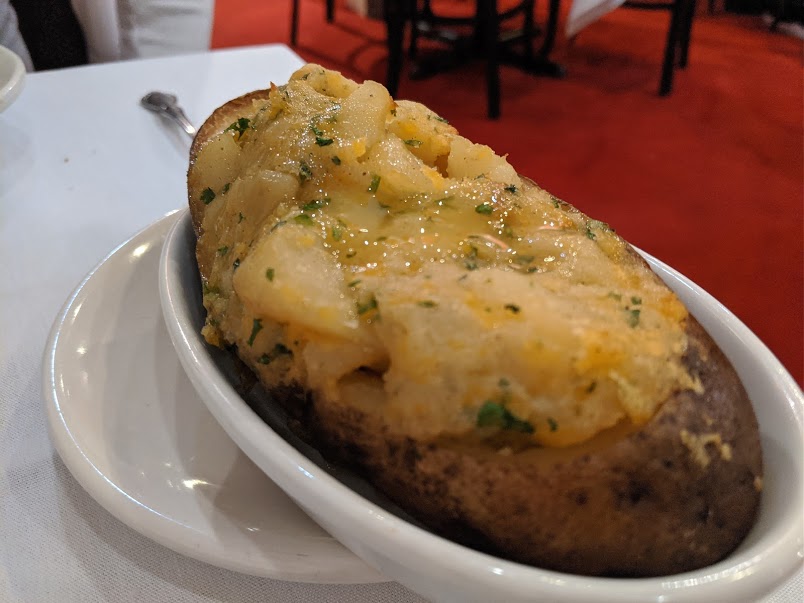 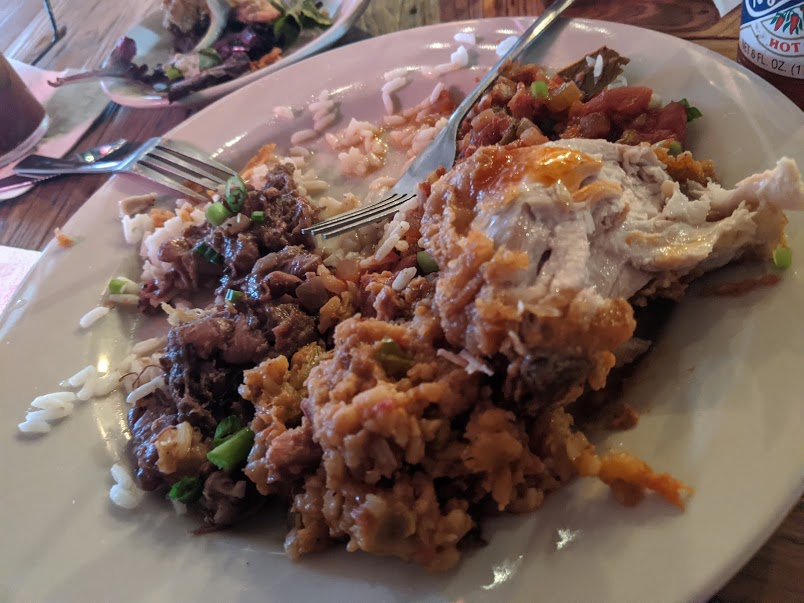 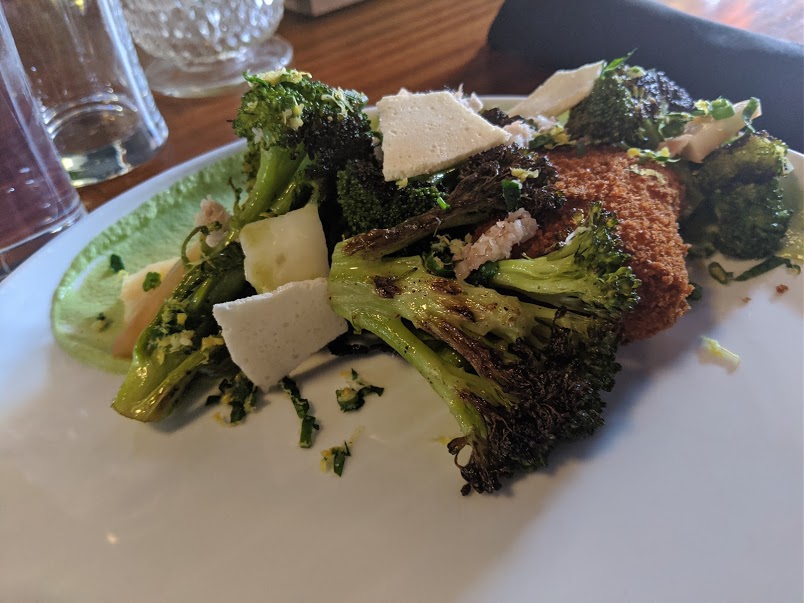 thank you - you must!

Are you going to replicate some of these dishes that you had ? I’m inspired. I just broke out the smoker yesterday and its snowing out .

I mean… yes the buckboard bacon melt, I’ve actually made that before, because i brought back the meat. I’ve made gumbo before, I’ll do it again. Most things we ate weren’t so good i want to replicate them. I’ve never made red beans and rice! I’d try that. I’m not going to do charcuterie… i would make the catfish but it would only be for me, since the BF doesn’t eat seafood… I’d try my hand at the dirty rice though I was shocked the BF ate it and loved it, what with the innards and all (but it was served with a wonderful sweet gastrique so maybe that covered it up for him…)

good luck with your smoker!

Your food is way better. Underwhelmed. I completely understand.

Sorry you were sick on a food trip. From the photos you seemed to have been able to eat many things on your list.

I’m not done with NOLA yet. Need a do-over! Next time with my sister, who eats everything.

I’m never “done” with any place I’ve been to. Can’t and it’s a reason for a return. I have to force myself to visit at least a new country every year otherwise I keep going back to the same places/countries.

Last year I decided to go back to countries I like but this year I can visit a new one. Very soon!

Fun report, MC. But so disappointing for several of your experiences.

Wow. Super bummer you were sick for this trip! I did new Orleans years ago for jazz fest. We found the food to be very hit or miss too. That wouldn’t stop me from going back and giving it another try! Feel better!!

So sorry you were so sick mc but truly it’s astonishing much much you did and ate anyway! Thanks for taking us along to share the highs and the lows, too bad there were so many lows, that doesn’t usually happen to you.

Parasol Po Boys for our early NYE dinner – I got the voodoo shrimp (they were OUT of oysters), BF got the roast beef debris. I tasted his – apologies to all, but I just wasn’t all that impressed! Maybe something you have to grow up with, but it was kinda Dinty Moore-ish to me. I liked my shrimp po boy just fine, although I think I like Parkway’s better.

The roast beef po-boy at Parkway is really good. I wasn’t crazy about Parasol’s po-boys either. For shrimp and oyster Domilese’s was my favorite.

I too am sorry you were sick; such a drag while on vacation, and hope you’re feeling better. I’m a fan of The Parkway’ s po boys too, I had an oyster one, but think the fried oyster ones are served only on Wednesday’s, which we happened to hit.

my last two times, everything was a hit! I just think i was hampered by being sick, the BF not liking seafood (i went with my sister the other times), and the holidays slamming some of the restaurants. And yes, I have faith the next time will be great!

Thanks Mr. H. I ate extremely well my last two times there. I’m sure it was a fluke and bad circumstances.

thanks… yeah, I’m guilty of revisiting places I love before seeing new ones. Hard not to, when you fall in love!

Although 2021 may bring a whole new continent…!

Thanks for the report and pics! Sorry you were sick.

I don’t think I’m a huge fan of roast beef debris po’boys either.

thanks!
Yeah, i’d much rather have seafood. dratted BF!