Noted the use of onion…

I’ll revisit when I make progress.

With a delicate, mild fish a touch of onion is the way to go. Bought or homemade, onion in the recipes is usually included, just go easy, taste and adjust.

One tip my mother used was to prepare a small patty, cook it and taste for adjustments before going ahead with a full batch. When I try something for the first time or arent quite sure about flavors, I use this tip.

Didn’t see any salt in the cake recipe. Not into overly salty food but I like a little salt in most savory dishes. I know the tarter sauce has capers but to me the fish cakes would be lacking with out at least some salt

Ah. Yes. I twice refer to seasoning, which I was taught only to mean salt & pepper. Apologies for any lack of clarity.

Oops I was scanning for salt and missed it. In that case more salt

Ah. Yes. I twice refer to seasoning, which I was taught only to mean salt & pepper. Apologies for any lack of clarity.

That’s interesting. I’ve always known “seasoning” to refer to any salt, spice or dried herb that’s added to add flavor something. Like paprika or ground cumin would be a seasoning in my book.

I think its context. You are right lots of things are technically seasonings. But in a recipe when you see “season to taste” or “season the meat” it generally means just salt and pepper. And if its not black pepper recipes these days are specific and specify the pepper required i.e. white pepper.

I think its context. You are right lots of things are technically seasonings. But in a recipe when you see “season to taste” or “season the meat” it generally means just salt and pepper. And if its not black pepper recipes these days are specific and specify the pepper required i.e. white pepper.

True. I can see “seasoned to taste” as being just salt and pepper, but at the same time, if I went to a restaurant and ordered a seasoned grilled pork chop, I’d be annoyed if it was only seasoned with salt and pepper!

I am not sure if it’s available in the UK, but if you haven’t tried Old Bay seasoning, it may jazz up your fish cakes to your liking. You may be familiar with it. I like to use it with fish cakes, crab cakes, crab, corn, and chicken wings. Here I use tautog (aka blackfish) and this zests up the cakes. I feel the tog are a little firmer and go well in cakes compared to cod. Cod are better eaten outside of cakes IMO. Anyway, this is a unique seasoning and if you get a big 16oz can it will last you a long time. In fact, with so many idiots selling on amazon, you can probably get a fantastic deal on shipping across the pond. Many companies have no clue what they are doing on amazon and you can get amazing deals if you hunt around for good international shipping rates.

Thanks for the pointer. Yes, Amazon UK have it from UK sources at about $8 for a 6oz tub. I’m not sure if it will be the answer to my fishcake challenge, but I’ll give it a go!

2 minutes later…Order has been placed.

I really enjoy this recipe from the NYtimes.

This is very similar to the way I make them. I don’t follow a set recipe, but do use a binder of bread crumbs, eggs and a bit of mayo. For flavoring I saute onion and celery until beginning to caramelize, and then add a touch of garlic and saute for a minute or two. The only problem is that the cakes tend to be delicate and have a tendency to fall apart. I think that the lightness of the breadcrumbs lets the flavor of the fish come through a little more clearly than the heavier potatoes, although the potato cakes are easier to work with.

I’ve also seen recipes that call for chopped raw fish to be use. I wonder how that would work.

It’s a great recipe and I have definitely begun ad libbing a bit with it. Refrigerating for a bit before cooking as called for by the recipe helps them stay together, as does spreading mayo on both sides of the ready-to-cook fish cakes.

mayo on both sides of the ready-to-cook fish cakes.

I’ll have to try that! And plan ahead better to refrigerate before cooking.

Yes, I rarely have issues with the fish cakes breaking apart with this recipe. I’m totally craving them now!

They’ll definitely be on my menu this week! And maybe a little sturdier thanks to these tips. Thanks!

Used the NYT’s recipe posted by @ieatalotoficecream (thank you!), turned out pretty good.
Left out the Old Bay seasoning (don’t have this and don’t know what it is) and mayonnaise (Husband hates that). 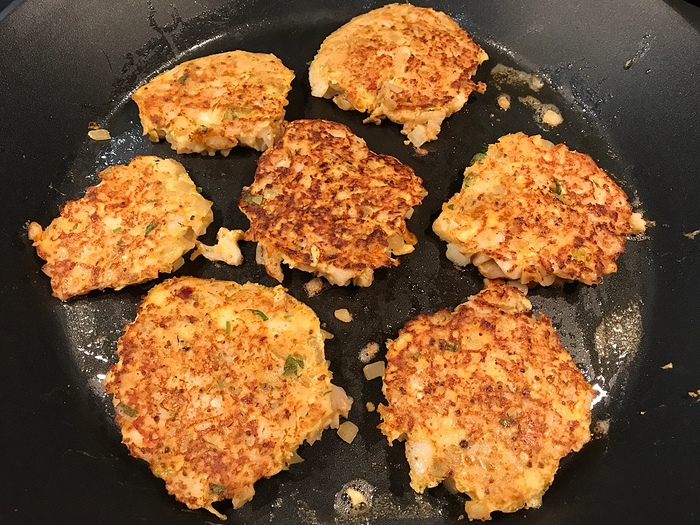 As for the cod used, I suspected it was a defrost one, except they were selling in the fresh fish section of Carrefour. But the quantity of water coming out of the fish made it suspicious.

Actually I had no time to put it in the fridge for 30 minutes as the recipe requires, I put the mixture in the freezer for 10 minutes and it worked for me.

I found a copycat Old Bay recipe here so you can see what’s in it: https://leitesculinaria.com/81715/recipes-homemade-old-bay-seasoning-mix.html

I do think the Old Bay contributes to the flavor and it’s useful in other seafood preparations so may be worth mixing up a batch if you’re so inclined.