I’m not expecting choirs of angel singing when I make fishcakes, but just a little flavour would be nice. This is what I did on Saturday:

450g/1lb cod fillets, lightly poached (5 mins) in milk, drained and carefully flaked into a bit less (350g/120z) mashed potato, flavoured with a spoon of mayo, some chopped parsley, and seasoned. Formed into cakes (6), dipped in eggwash and breadcrumbs, refrigerated to firm up, and then shallow fried until nicely browned.

Result: One of the dullest meals I’ve made for a long time. Shop-bought fishcakes (normal cod ones, not the fancy melt in the middle, or crab/prawn/Thai sort) are just so much nicer. Fishier.

This is a pretty standard UK recipe, which gets plenty of positive reviews.

Any suggestions please? Maybe a little squirt of anchovy puree in the mix? Using a “fishier” fish (what?)?

I’ve not made a lot of fish cakes but looking at the recipe the tweaks I would make are:

Some type of onion perhaps? Just a touch of dried onion flake, minced spring onion, leek or spanish onion depending on preference…if you like oniony flavor.

How much milk are you using in the poach? I’d try using barely enough - too much milk will pull flavor out. And I liked the idea of using the poach milk in the mashed potatoes. Are you using enough salt throughout the process? Just some thoughts.

Thanks for the replies.

I loosely based the dish in this: 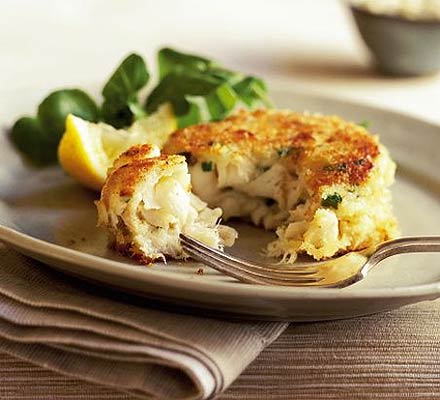 Plain mayo, rather than their jazzed-up version, but that alone doesn’t account for the disappointment, IMO. I did include the lemon zest.

I’ll try using some of the milk, but I’m not hopeful as I was way off the pace taste wise.

I think you need some finely minced onion or green onion, a squirt of Worcestershire (serves same function as anchovy puree which you could also use), some lemon juice and/or zest, a shot of hot sauce and maybe a bit of mustard. Mild fish and potatoes need some help not to be bland.

Epicurious has a Tunisian Fish Cake recipe if you want to go exotic. It is good when you make it, even better the next night. I use less garlic than it says, add some minced anchovies and use crushed Saltines or breadcrumbs instead of matzo meal.

These are my go-to shop bought fish cakes:

You can see that the ingredient list includes onion, but it’s low down in the list which is in % order, so there isn’t very much in there. Anyway, I’ll give it a go.

Your post reminds me that I enjoy, but rarely get to eat, fishcakes. So I popped over to Serious Eats for a recipe. Their version includes a few flavor-infusing twists: higher proportion of fish-to-potato. Also the fish is poached in water with parsley stems and a couple crushed cloves of garlic. Then there’s a teaspoon of grainy mustard. 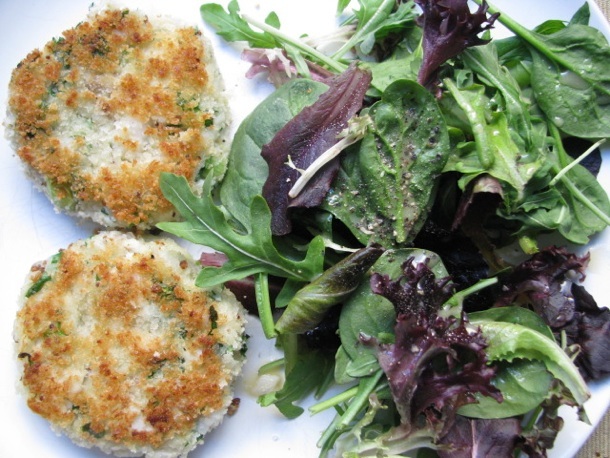 This recipe can be easily tailored to your personal preferences, so don't be afraid to experiment. Using the same basic recipe but substituting salmon or cod, and dill or cilantro, you can create your own interpretation of this simple dish. These...

Hope it’s useful as you consider various ideas. Now I’m curious about giving this recipe a try myself.

Yes, something from the onion family (I love dehydrated onion flakes) and some seafood spice like Old Bay. Maybe you simply just need more salt? Lemon juice? Hot pepper sauce? MSG? Poaching the fish in milk will definitely remove a lot of the fish flavor from cod so you might try cooking in water instead. I would simply cook cod fillets in a microwave in a bowl covered with plastic wrap with just a bit of liquid to keep them moist.

I really enjoy this recipe from the NYtimes. Watch the salt if you’re also doing Old Bay. 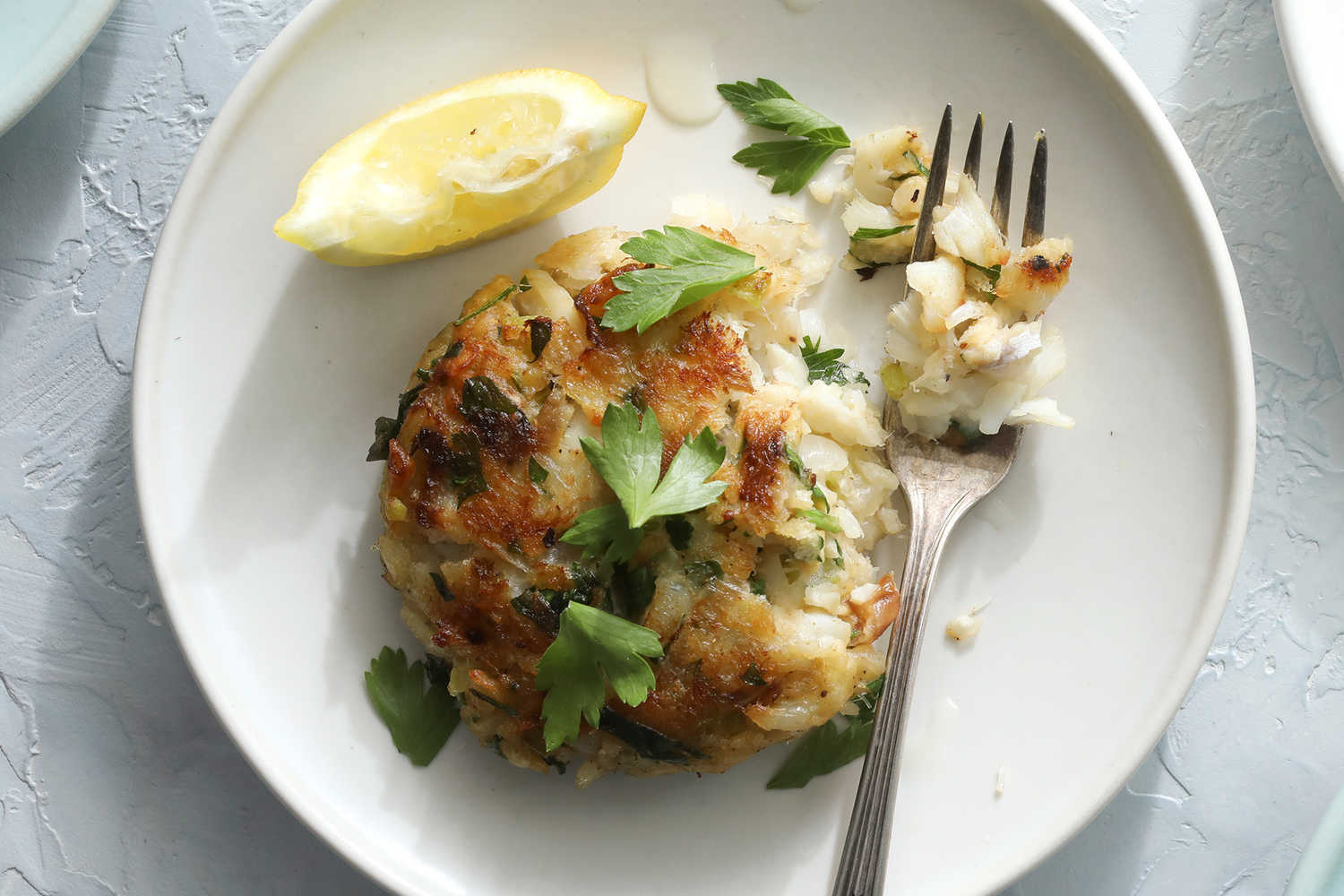 Cod cakes are terrific with cod, but can be made with any white-fleshed fish Poach the fillets in bay-leaf-scented water, then flake the cooled meat into a New Englandish mirepoix of sautéed onions and celery Eggs and cracker crumbs will help bind...

Looks like you left out all the ingredients that would have added more flavor – the capers, horseradish, shallots, chives, and mustard. You were supposed to make the tartar sauce and then add a portion of the sauce to the cakes, which is probably why your version came out dull.

Even if you don’t want to make the tartar sauce for an accompaniment, you can (and should) still add a touch of each of those ingredients along with the plain mayo to your cake mix to get the flavor you need. I use shallots or diced red onion (instead of chives) when I make fish cakes, along with fresh herbs and spices. Lemon and plain mayo does not add much flavor to something like this. Also make sure you add enough salt – many people undersalt their food, which also contributes to a bland/dull flavor.

From the recipe you posted it looks like the sauce recipe to accompany these is where the missing flavor comes from since it includes capers, dijon and horseradish. So if you have leftovers of these bland cakes i would mix up some of that sauce to help them.

I use poached salt cod for fish cakes which is more traditional & it has more flavor. I also saute some finely chopped onion & celery to add. I also don’t mash the potatoes. I leave them chunky & kind of break them up when I stir in the other ingredients so they stay chunky & give more texture to the fish cakes. Eggs, salt (sometimes - the salt cod usually has enough even after soaking) and pepper are the only other ingredients.

They’re quite popular around here.

I tend to lightly grill or fry my fish(skin on), so its just cooked, rather than poaching. I think this helps intensify the fish flavour. I also often use salmon as its got a stronger flavour, add some chopped dill and parsley and it adds to the overall flavour.

I tend to keep stronger flavours like capers etc for a tartare sauce rather than adding competition to the fish in the cake.

Yes, I generally roast salmon fillets rather than poaching them for just that reason. I’ll give it a whirl.

Thanks Ttro & boog, but it’s not the zip of capers, mustard and horseradish that was missing. It was fish taste. Seasoning was, IMHO, correct. Maybe the cheap frozen cod I used is an issue, but I can’t believe that commercial makers are using anything different. After all, cod’s cod, right?

Another hypothesis for you: Maybe poaching in milk diminishes the fish flavor? I remembered that people who eat bluefish where I live often soak the fish in milk first to diminish its strong fishiness.

So if you are starting with very mild fish like cod, I wonder whether milk as a poaching medium could be, well, subtracting any fish flavor that’s present. Hmmm.

I think you figured it out: It’s likely the fish itself. The frozen cod I purchase from Trader Joe’s varies wildly in flavor. Just made fish soup yesterday with cod that pretty much tasted like nothing. Sometimes it tastes very good, though. It’s cheap enough that I’m okay with the gamble. I have flavorful sauces or condiments on standby in case it’s flavorless.

Maybe not but what other chemicals are they adding as flavour enhancers to boost the taste of the fishcake - all those E numbers are not just preservatives.

These are the ingredients of the excellent bought fishcakes from my post upthread:

Also I see semolina in these ingredients, which I used for the first time ever to add crunch to roast potatoes on Monday with great success, so I’ll use a little on the coating.