No matter how much I filter or scrub mussels, I never get a clear broth. There’s always some grit in there. I use farmed mussels, and tried both fresh and frozen. I’ve tried giving the mussels many changes of water (even with cornmeal once). But it’s very frustrating to follow a recipe and have everyone avoid the broth. Do I have to strain the mussel juices and add seasoning after removing the cooked mussels?

Just to help make this thread more productive (maybe, just how my brain is working now)

Mussel broth is never clear in my experience. However, clear and gritty are not the same thing.

Adding corn meal is supposed to help bivalves purge sand in their stomachs. I don’t find it works.

You can try scrubbing the exterior of mussels/clams to help get rid of some grit. It just won’t get rid of gut grit.

Letting broth sit for a minute or two usually helps most grit settle out of the broth. Just be sure to not pour out the last bit of broth.

People avoiding broth - how are you serving them? With what?

Straight muscle broth I don’t typically “drink” (spoon whatever) when served with mussels.

Broth finished with herbs and butter or cream (typically I steam in some wine) I do sop up with crusty bread.

I strain clam broth through a paper towel set in a sieve, before stirring in butter and parsley. I don’t see why this wouldn’t work with mussels, although I’ve never had a grit problem with them.

I’m pretty much on the same bus as Thimes.

By the by, I don’t think I’ve ever seen frozen mussels, let alone cooked with them

I sauteed some garlic before adding mussels, then finish with butter and parsley. Served with bread. The mussels are fought over, but the broth is hardly touched. It looks like I just have to be careful to leave the sediment behind. Thanks!

I have never seen any grit but perhaps it is because I need cataract extraction. However, even during my younger days, when my eyesight was better, the mussel broth are always eaten with lots of gusto!!! Either with French bread dipped in it or added to rice. The garlic, white wine and spinach used for cooking mussel is heavenly! This recipe I posted sometime ago bec the Belgian Restaurant in DC from whose recipe I imitated won against Bobby Flay in his throw down show !!! Blue cheese towards the end and spinach before serving brings it to the next level.

Sounds great! I’ve been practicing with “budget” mussels. Maybe I should try the ones from Whole Foods again. Do you know if Costco carries mussels?

My kid especially loves clams and mussels. Mussels are expensive at restautants, so it’s worth the effort for me to try and get it right.

Letting broth sit for a minute or two usually helps most grit settle out of the broth.

Agree with this - there’s always some sediment, letting it settle helps.

Also, you could increase the liquid used (broth, wine, coconut milk, whatever you are using) - that way you could fish out (pun unintended) the mussels into another dish, and decant the broth once most of the sediment has settled.

I enjoy the murky broth . Sopping it up with a crusty piece of bread . It’s my favorite part.

I meant the sand - murkiness doesn’t bother me, but grit in the mouth I would prefer not…

Yeah, I should’ve written gritty, not murky. I agree murky is good.

Stay off the bottom . Or remove the mussels from the pan and pour the juice over leaving a little bit in the pan . This will be the grit left behind . I have never had a problem

I do give the shells a quick scrub with a vegetable brush before cooking mussels.

When I bring ‘em home for cooking, I place the mussels on top of a layer of ice in a low-sided casserole dish, cover with a damp kitchen cotton towel, and store the whole thing in the fridge. It surprises me to see the “gut grit” that collects in the pan.

I always cook the mussels later in the day that I buy them, so I can’t say how long mussels would keep stored in this manner.

When I bring ‘em home for cooking, I place the mussels on top of a layer of ice in a low-sided casserole dish, cover with a damp kitchen cotton towel, and store the whole thing in the fridge. It surprises me to see the “gut grit” that collects in the pan.

I meant to say that grit collects in my low-sided casserole dish while the mussels store in the fridge before cooking. That way, little if any grit in the finished dish.

Also like @JoeBabbitt says above, if the mussels have any bits of beard removing that helps.

Do you know if Costco carries mussels

My Costco (Raleigh, NC) has mussels with the rest of the seafood just about all the time. But this Costco has a large area devoted to seafood. The Durham, NC Costco has had very little fresh seafood when I shopped there. It is really going to vary on location.

I always scrub my shell fish first. Debeard if needed.

After steaming I strain the juice through a fine mesh strainer and coffee filter. Even so, there is sometimes still a little grittiness in the residue at the bottom of the pot. I let the liquid sit in order to settle and then carefully pour leaving the sediment behind.

I bring them home and place them in a large bowl in the sink with cold water to soak , and make a bout 3 or 4 changes of the water every half hour or so.
I too scoop out the mussels after cooked in chopped tomatoes, white wine, chopped garlic, parsley and a pinch of red pepper flakes.

I use a slotted spoon to remove the mussels to a serving bowl, then take a single piece of paper towel placed on the slotted spoon to pour the remaining broth through. This normally along with the pre-soak/purging takes care of the grit.

The Costco in Pentagon , Va has mussels that has beards removed. . I usually use it within 24 hours refrigerating them under a damp towel. 30 minutes before cooking them, I place them in a large bowl of cold water for 30 minutes after briefly brushing them , add a tablespoon of cornstarch and cook them. There will be a little grit at the bottom of the bowl.
I have never seen any grits in the mussel broth. The murky color is normal I think. We have never had any broth left over when I serve mussels. I have a cheap 14" shallow non stick pan purchased from Costco around 10-15 years ago, which I use exclusively to cook mussels or larger amount of little neck clams ( unless I cook them in a cataplana pan ) as I can see the clams or mussels open up ,pick them up as they open, and when they are all opened, I would increase the temp of the broth , add blue cheese and spinach , pour the clams back in and serve from the pan. .This makes a very tender delicious clam and clam broth.
Friends who partake of this meal enjoys watching the clams open up ( takes a few minutes ) . 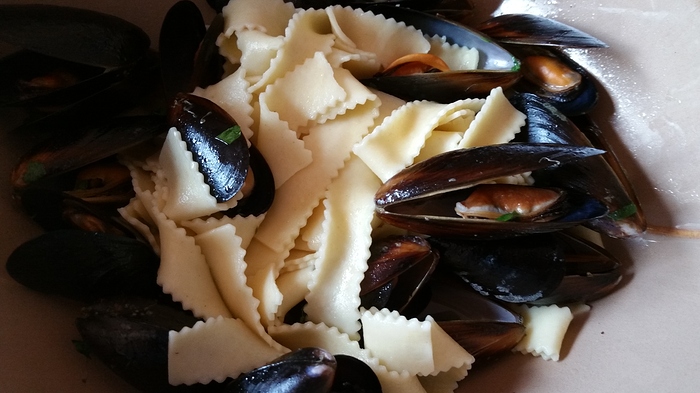 Success! The family wanted pasta with mussels today and all we had was this ribbon pasta. It actually went very well with the mussels. Seasonings were butter, red pepper flakes, parsley, and garlic. Even though I burnt the garlic, everyone still mopped up the broth, either with bread or potatoes. Thanks for the help.

I always scrub and debeard fresh mussels. Sometimes I can’t get all the beards off, no matter how hard I try (using a pair of pliers.) The frozen mussels already come cleaned, although a stubborn beard or two will sneak through. The packaging warns against fully defrosting, but I did once and I couldn’t remove the leftover beards. For the price, $2.50 at Aldi for 14oz farm raised from Chile, I can’t complain. In fact, today I used the frozen ones and only had one beard (luckily in my plate.)