Slight sidetrack: How did you like Modernist Pizza? I wanted to get it when it came out, but never pulled the trigger.

I haven’t had time to actually cooked out of it yet (but read it completely) but similar to Modernist Bread it is much more approachable than the original Modernist Cuisine. They nicely lay out many different pizza types and how you can make them at home with many different set ups. It’s an expensive book-set but if you are interested in pizza making I think it is a good investment. (But it might trigger additional purchases like we are thinking about an Ooni

Thanks! Yeah I think most of the books in the series have spurred equipment purchases by their owners. Our friends have an Ooni and it does produce very nice pizza (although there was definitely a learning curve)

@bcc has an ooni as well, maybe he can shared his experience.

My experience with the Ooni is mixed. When I bought it two years ago, the first pizza I made was terrific. A few days later the pizza turned out terrible. It was because I was not using the proper hardwood pellets. Last year the weather here, Canton of Zurich, was terrible, and I couldn’t use it at all. And this year, because of the dryness and lack of rain, we are not allowed to grill with fire, even in our own backyard. But I hope the situation will soon change, and I’ll be able to try pizza again.

So you have an Ooni just with the pellets and without propane ?

Actually mother board failure has been known to occur after a single self cleaning cycle. If you want Neapolitan pizza temperatures, an Ooni is probably less expensive than a new board.

Hm. And most gas stove/ovens at the consumer range like mine tend to have a 1-year warranty. If that “self-clean once and get a dead board” person hadn’t happened to have run the cleaning cycle in the first year, they’d be quite out of luck.

I do tend to run self-clean about once per year and sometimes more often, but it’s less about the oven itself being dirty and more about the 3 pizza stones needing burned off. But I can get my grill up to about 750°F, which should be hot enough to burn them off just fine, so maybe I’ll start doing that instead as a precaution. Not to mention I could start baking pizzas out there, too.

I’ve been lucky with this one so far, the only thing that’s gone wrong with it is I’ve had to replace the oven igniter a few times. The QC on igniters seems to be going down. The OEM part lasted about 8 or 9 years while two that I’ve installed have lasted only about 1-2 years each. I think the current one is about a year old so we’ll see when it cracks & fails (I bought a backup the last time, so I have one handy). Furnace igniters seem to have the same problem in recent years.

I cook pizza on a Weber gas grill. I put the stone on three half bricks to reduce the headroom and get a more even cook of top and bottom. Doing it tonight. The dough has been in the fridge developing.

Ooh, you have to try this Clementi oven, gas and wood. It’s a pro oven, bought it directly from Italy, so it’s not much more expansive than an Ooni oven, H has made 20 pizzas in a go with it. Very happy with it. Tested for someone who has the intention to become a pro. 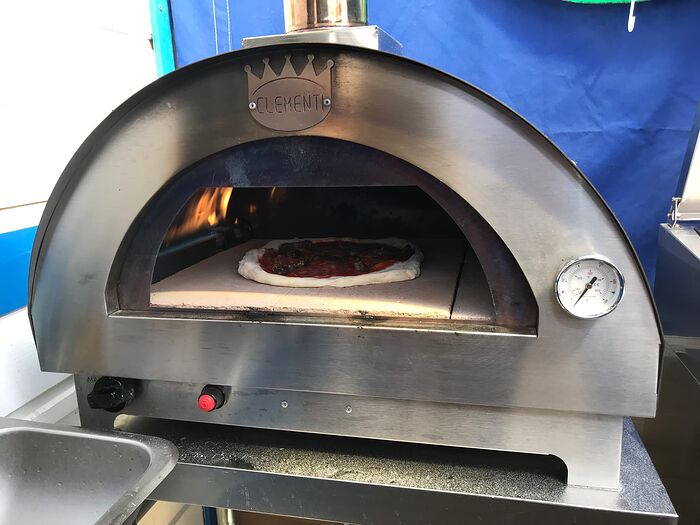 Since it’s a gas and wood compatible oven, able to use it even there is the fire bbq grill ban in the south east of France. The outside of the oven is cold when it is heated.