These pickled mustard greens are eaten in other Asian countries also. I don’t know the Cantonese or Mandarin names for this fermented pickle. This is how I make this Vietnamese version. I am pretty lax with the fermentation process and don’t do any sterilization steps and it works for me! (I’m not saying you don’t need to take the precautions necessary for your standards and needs.)

I basically just soak cut and washed mustard greens in a salt water brine that I make to taste. The brine tastes like a soup that is just a tad bit too salty. Why can’t I offer exact measurements? Everyone has different salt tolerances so my ratio may be too salty or too light and the resulting pickle will be too salty or too light. My mom’s pickle is not salty enough for me and mine is too salty for her. The ferment is pretty forgiving. Using a crock pot with plenty of brine keeps the greens submerged and allows for gas escape while still keeping out dust and other nasties. My house averages only around 65-68 Farenheit so it took a week to get to my liking. My mom enjoys it after 3 days. 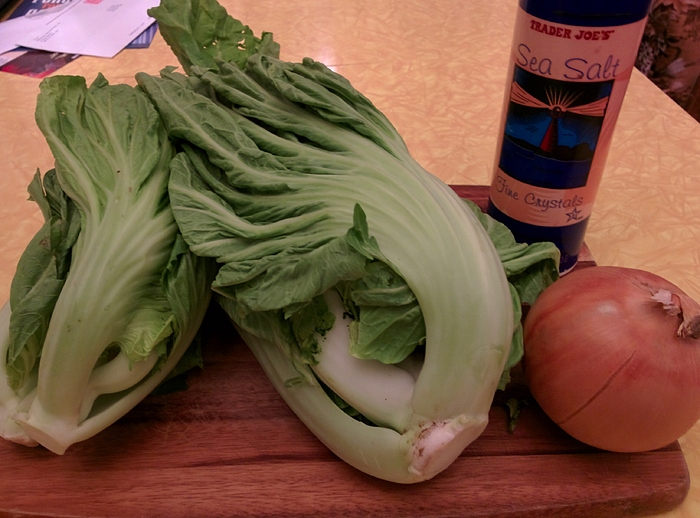 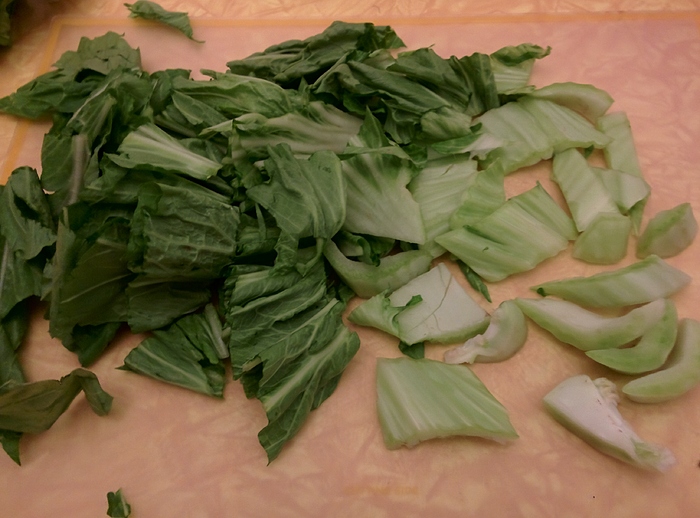 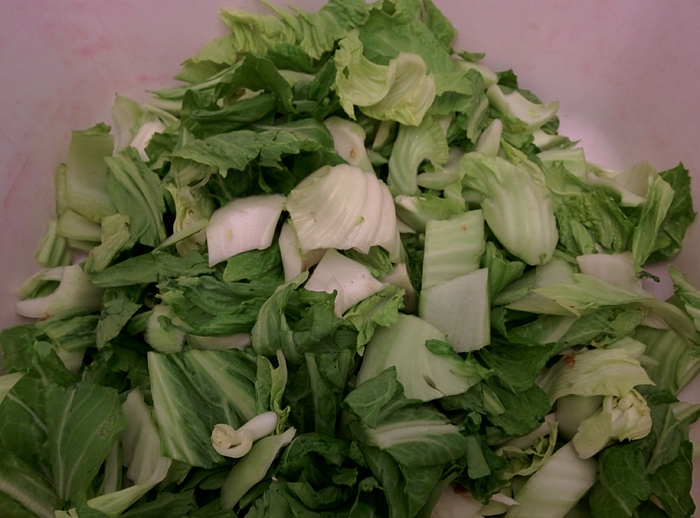 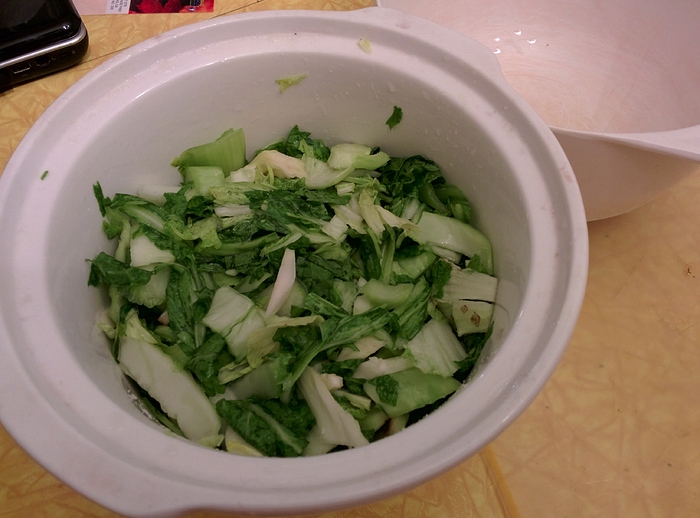 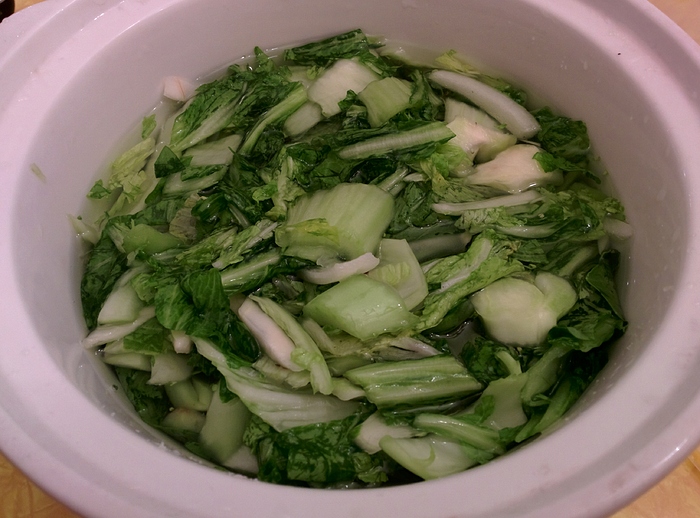 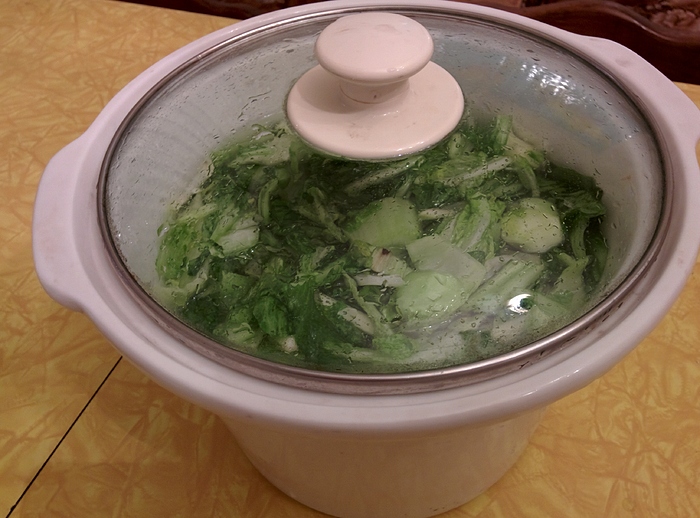 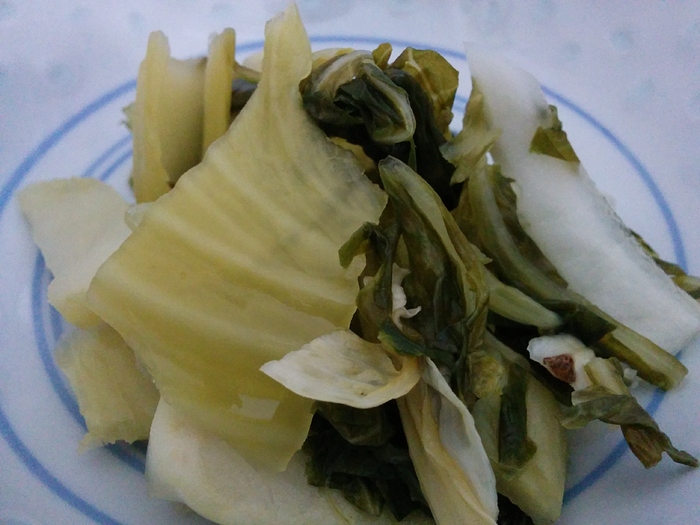 Have you fermented mustard greens? What do you do differently? How do you like to enjoy it? Try it! It’s easy and yummy

This is so interesting and I love how you use a crockpot insert for the purpose. Fermented greens other than cabbage haven’t been part of my culinary know how. Thanks for opening my eyes!

I used to buy Vietnamese pickled (?) aubergines (sold in a jars, also came with whole prawns version) but the Asian shops stopped imported them. Probably not hard to make but there’s no little round aubergines here to make it.

This is the recipe I use for pickled mustard greens. I stir fry them with squid. I forget where I got this recipe from, but I’ve been making it for years.

Bring 1 cup water to a boil, remove from heat, and add salt. Stir until dissolved, then stir in sugar and vinegar. Pour brine into a glass container with a lid. Press the mustard greens into the brine, then add enough cold water to cover the greens. Cover the container and leave at room temperature for 3 days. Remove the greens from the brine, drain, and store in a glass jar in the refrigerator for up to 2 months.

our method is almost exactly the same. We like to sun dry ours first, i think it cuts down on the slight astringency of the mustard greens. We season the salt to taste like the ocean. Eat it with any salty–caramelized fish, chicken, pork etc. 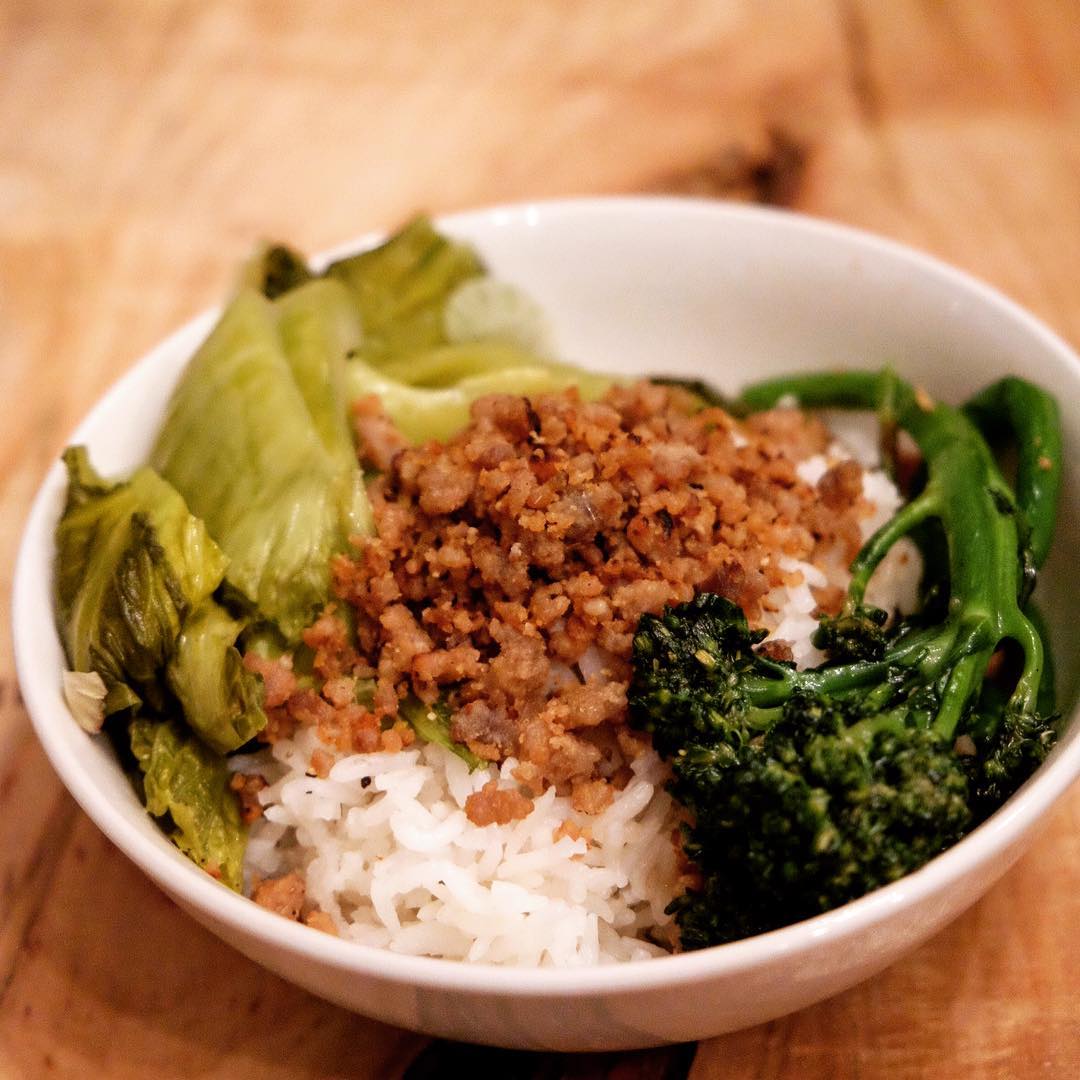 I love mustard greens. I must have had them in Vietnam, I think mainly with com ga. I also had it a lot in Thailand, It went very well with pork leg rice in Chiang Mai: 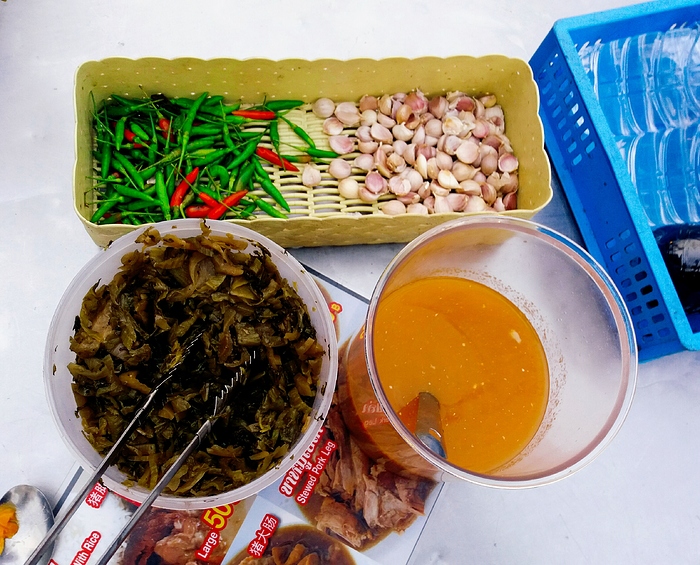 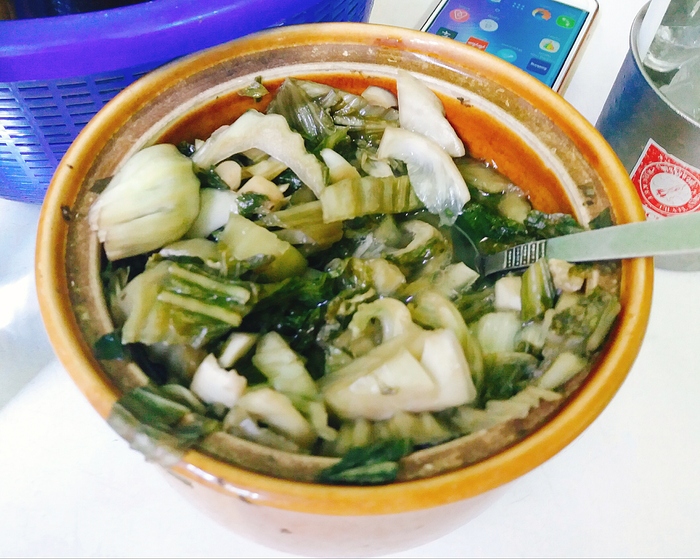 Like @Presunto I’m liking these posts. Not sure if you have a recipe for Bò lá lốt but it was perhaps my favourtie thing I ate while I was in Vietnam.

we actually grow our own betel leaves, but if you can find it frozen in your Viet or Thai markets. If you cant find those, you can use perilla or shiso leaves found in korean or japanese markets. Essentially you just make a ground beef sausage and roll it in the leaves. You can also use pork or combination of.

I don’t have a crock so it’s a glass jar in the fridge for me, but the time it takes is similar (3 days or so). I kinda prefer the taste of smaller/Chinese mustard green/Xue Li Hong; it seems less pungent and pickles faster. I think the general salt to veg ratio should be around 3.5%, adjusting upward if you want it saltier; any less salt you’d have risk of spoilage. It’s great sliced thin and stir-fried with some minced pork and served over noodle or over noodle soup.

Here’s a question to anybody more scientifically minded than me, is there any danger to eat freshly pickled mustard green and ingesting too much nitrate? My parents always say to wait for a week to reduce nitrate intake. It could just be hearsay as they are constantly vigilant about any potential causes linked to gout, but I’m curious…

When they stopped importing the spicy aubergines my weekend coffee Trung Nguyen also came to an end.

If you like kimchi then you probably like this as well. I think it’s more kimchi than pickled. Nice and crunchy, although it looks “spicy” but it’s really not that spicy. 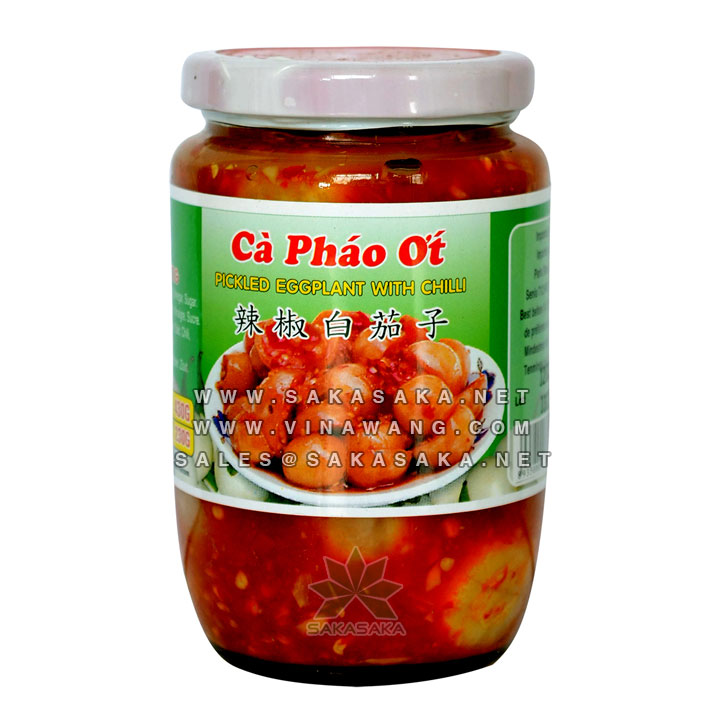 Found another photo on webs. 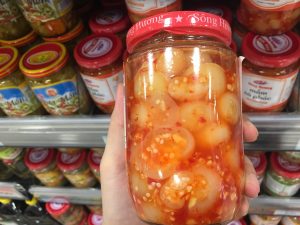 Mustard greens: I have tried the Thai version a couple of times but stopped all together. Thai versions of many things tend to be sweeter. They must have a sweet tooth. Vietnamese and Chinese versions are sour and more to my taste.

Thanks for your detail explanation on mustard green. The ones you are making is salty, is it sour too due to fermentation?

I know the Chinese salty version 咸菜(not too sure of origin, Cantonese or Shanghainese??) Less familiar with sour or spicy version from Sichuan 四川泡菜.

Long time I haven’t eaten that, might be a good idea to make some.

What other types of pickles is used in Vietnamese cooking?

They start off salty and become more sour as they ferment. My mom doesn’t like them sour and that’s why she enjoys them after 3 days (and her house is warmer than mine). I like mine sour but I do not pickle them with vinegar, just a natural ferment. When they get sour, many people cook them into a soup with pork riblets or use them as an ingredient rather than as a side dish.

What other types of pickles is used in Vietnamese cooking?

There’s the famous daikon and carrot pickle used in sandwiches. There’s pickled “leeks” that aren’t the same as what we call leeks in the West. 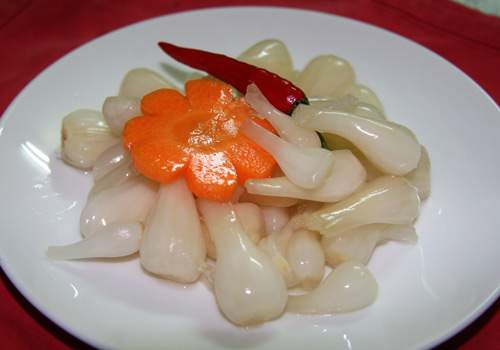 And “dua mon” which is a variety of vegetables (carrot, daikon, green papaya, garlic, cucumber) which are dried and pickled with the inclusion of fish sauce and eaten as a side dish during the New Year.

There’s pickled eggplant as mentioned by Presunto and pickled shrimp. 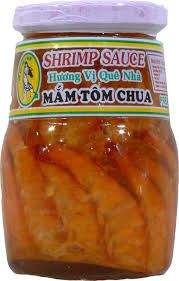 There’s pickled “leeks” that aren’t the same as what we call leeks in the West.

from James Syhabout and Andrea Nguyen -

I looked for a Thai recipe to equalize things out. I settled on a recipe from Hawker Fare, a soulful cookbook memoir from Michelin star chef and restaurateur James Syhabout, based in San Francisco and Oakland. His recipe is based on Lao Isan Thai flavors, and also reflects his mother’s approach. 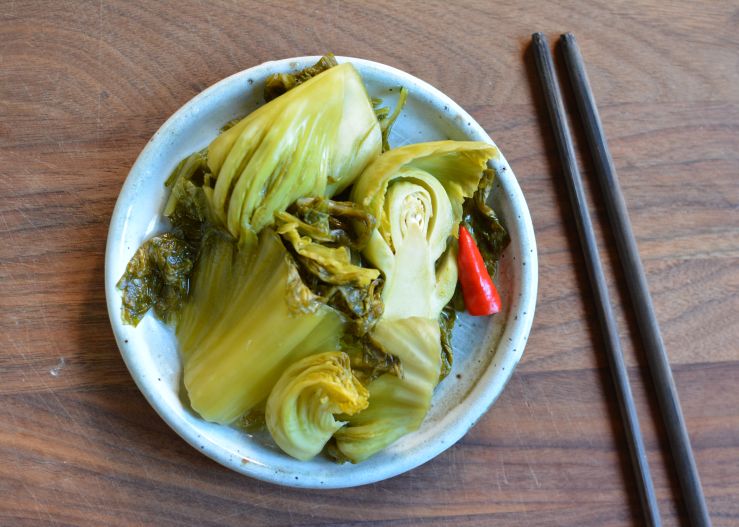 Tart, spicy and with an umami funk, fermented Chinese mustard greens are easy to make. This recipe is easy and includes tips on selecting the right greens too!

Yes I agree (but not the same as what we call “green onions” in the U.S. which don’t taper like these do). They are labeled as pickled leeks on the jars. There are so many varieties in the onion family so I guess there’s no right or wrong.

Interesting that their recipe adds cooked rice to feed the ferment. For me, the MSG in the recipe is unnecessary as I usually eat this to accompany dishes that are already plenty savory. The sour/salty helps cut through the richness.

The type of mustard shown at the top is also known as Kekkyu Takana, or Wrapped Heart Mustard. Unlike many of the Asian Brassicas (B. rapa, B. chinensis, etc.), this one comes from the same species as brown mustard seed, Brassica juncea. These typically have a spicier, often a bit bitter flavor. I’ve grown them in the past and they sweeten up with the cold of November. Not as cold hardy as the seed types, though.

As for the Chinese leeks, indeed, there are a ton of Alliums and A. tuberosum is usually what gets named “Chinese Leeks”. True leeks are often erroneously said not to make bulbs. This is not true. Elephant Garlic is a type of Leek, which explains its milder flavor. In fact, the leek pictured above could easily be immature Elephant garlic. But, it’s less common in Asia.

Not seeing the foliage but guessing from the swollen base, my best guess is the Chinese Leeks are Allium fistulosum, the Welsh Onion. Larger varieties look like leeks and they are native to China. The leaves of this species are tubular/hollow. Most varieties have slightly swollen bases, not large bulbs. By the way, “Welsh” here means foreign, not from Wales.

Well, seeing as you can safely eat stir fried greens, I doubt the nitrate issue is a real concern. Burning or scorching nitrates in high concentrations is risky (e.g. burnt bacon). I’ve eaten a ton of fresh, just starting to ferment Kim Chee and it’s never caused an issue. There are Nitrates in Celery and Spinach, which are often consumed raw.