Hi. I’m relatively new here and had a question about making roux. I’m making shrimp etouffee tonight and am trying to avoid going to the grocery store. Checking my butter supply I realize that I only have about half the required amount. My question is can I use 1/2 butter and half oil to make the roux? Googled but could not find an answer. Saw a lot of recipes using one or the other but not both together. Seems like it should work but only made it using butter in the past and only once. Thanks for any help.

Melt the butter in your oil, and then add the flour… should turn out just fine.

I’ve only ever made a roux using butter but Scott’s suggestion make sense.

I’d love to hear how it turns out! I don’t recall making etouffee, but I use oil when I make a roux for gumbo, so it seems like it should work.

I did not end up making etouffee tonight. Had pasta and meat sauce instead. It’s definitely on the menu tomorrow. Thanks for your help.

Made the etouffee last night. Mix of butter and oil worked well. I prefer the flavor using all butter, but It worked in a pinch. Thanks for everyone’s help.

I know I’m a day late to the party but as you have heard there is no problem doing a mixture. As you said you prefer the flavor of all butter which is what I wanted to comment on, in the future you can experiment with different flavored oil too. Like truffle oil in a roux for mac n cheese.

Thanks I’ll keep that in mind.

made a roux with shortening?? Any tips or tricks??

My dad, a restaurant cook for 40+ years, made the best gravy. Used whatever oil on hand, mostly vegetable or peanut oil.

May/may not work for your application.

I’ve made etouffee and used my gumbo roux. I’d guess I make it like you, since I go oil/lard.

You can make a roux with just about any fat. Bacon grease makes for a really deliciously porky roux (as long as porkiness goes well with whatever you’re making).

Yes… I wanted to make a roux for ground pork meatball dish, and I have some bacon fat drippings/grease in the fridge. So, I think I’ll change gears and use that bacon fat for the roux.
Thank you so much for the idea and the advice!!

You won’t regret it. Lard is a roux go-to.

“Plain flour Oil—bacon drippings, olive oil, cooking oil, lard, or a combination of these. I use 2 or 3 parts of flour to 1 part oil. If I want a t’ick, t’ick roux, I use 3 parts flour to 1 part oil. If I want a t’in roux, I use 2 parts flour to 1 part oil. Mix flour and oil in a heavy pot. A black iron skillet or a Magnalite skillet works best. Cook slowly as the roux changes from a cream color all the way to the color of a Hershey chocolate bar. You got to stir the roux damn near all the time while it cook itself. Me, I got a special roux stirring spoon for dat, and I don’t use it for something none at all except for stirring my roux. The way I make a roux it takes from 45 minutes to more than one hour before it’s did. And how come the reason for that is because I want to cook the flour taste out of it.”

The photographs show a roux dark as coffee. I’ve had gumbo that dark in Louisiana - and dreamt about it ever since. 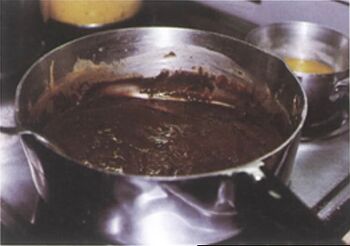 It is very hard to get that almost black Roux and not burn it, at least for me. I can usually get to a good dark red-brown before I loose my nerve 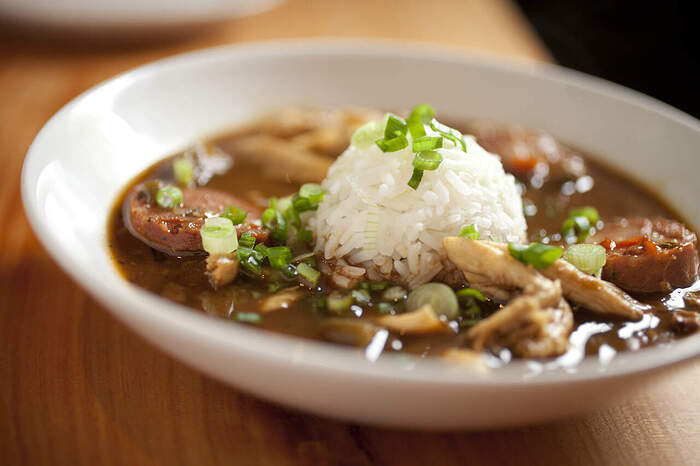 I do light roux on the fly - but dark/brick roux takes time - rush=burnt…
I keep a passel of frozen dark roux so I can cook timely . . . 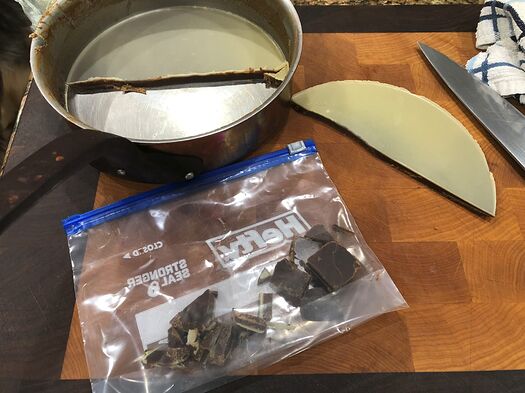 My only rules for roux[1] are, don’t use butter for a dark roux, and don’t use extra virgin olive oil for any roux. Tried it once and didn’t like the flavor.

Note it’s easier to get a very dark roux without burning it using the oven. Takes a bit longer, but there’s a lot less hands-on compared to stovetop.

Note it’s easier to get a very dark roux without burning it using the oven.

More than good enough for me!