I plan to make scotch eggs this week but will need to make them ahead and was just curious if anyone had any suggestions for the best approach - 1. Boil eggs, wrap in sausage and let sit in the fridge until ready to cook or 2. Cook ahead and reheat. If 1. how long can I keep them in the fridge and if 2. what would be the best way to reheat them?

I have no answer to your question, just happy you made it over!

They dont reheat well, it overcooks the eggs and gives them green rings. We’ve done the paleo scotch eggs recipe many times for breakfasts and just eat them room temp. (Set out long enough to take the chill off.)

Instinct tells me that letting peeled eggs sit inside raw sausage is a bad idea. The key to easy peeling is to cook cold eggs with steam or in simmering water, then shock them in cold/ice water. I’d hard-cook the eggs, leaving them in their shells until you are ready to wrap and fry. The only time I tried keeping shelled ones chilled in a covered container of water, they stank within a day. At the time, I was unaware that the sulphur is in the whites. It may be that it migrated into the water, as Jacques Pepin says happens when cracked cooked eggs cool in ice water, and that the eggs themselves were fine. I tossed the whole shebang. To cut assembly time, you could portion out the sausage, shape into thin patties, and chill between sheets of wax paper or plastic, ready to wrap.

I’ve made them multiple times. I think the best ways (in order of preference are 1) keep peeled boiled eggs in the fridge, wrap in sausage and cook to serve or 2) do the whole shebang but eat them cold.

Have you tried reheating briefly in a hot oven? I would expect that to yield a good result. Regardless of method, they should be well-drained after frying, maybe even patting with paper towels as well.

Thanks! I’m glad to be here, slowly learning my way around

Good idea, I never thought to just serve them cool or room temp. It would also work out well as I can just pop them out of the fridge when I get home from work.

I plan to bake them, no frying. I’ve never made them before so have no experience reheating but think I’ll just eat them room temperature.

That’s how I make them (using parmesan in place of breadcrumbs), baked in the oven. I use sausage meat - I imagine a lower-fat ground pork would be slightly better if you’re going to eat them cold (though they’re still perfectly palatable).

I agree. I’ve made them a few times as well and we have never had luck reheating.

That’s how I make them (using parmesan in place of breadcrumbs), baked in the oven. I use sausage meat - I imagine a lower-fat ground pork would be slightly better if you’re going to eat them cold (though they’re still perfectly palatable).

It sounds like you are making these to have around as a snack, rather than to serve at a gathering. If the former is the case, just oven-bake sausage portions, then have a nibble of sausage along with a bite of egg. That gives you the added flexibility to make egg salad, include egg with a meal salad, have sausage with scrambled egg for breakfast, etc.

This is my recipe http://www.thedomesticfront.com/baked-scotch-eggs/ - I do 400 for 25, but there is a bit of cracking and shrinkage sometimes. I like them well-browned, though. (And I don’t get the greenish rubbery eggs, but I do a pretty light hard boil to begin with)

The leaders have discovered how good they are with a beer --the whole group, kids and adults, begs me to make them every time they have an overnight outing.

I bake them, simply because by the time I make that many, I’d be standing over a hot, greasy stove for hours. The leaders appreciate that I make them with turkey sausage and bake them – they’re then at least not awful, healthwise.

The green/gray color is the sulphur, which is part of the white but not the yolk. According to Jacques Pepin, the sulphur migrates away from the heat, so as the eggs cook, it moves toward the still-cool center. IF you crack the egg slightly after cooking, he says the sulfur will move out into the cold water in which you chill them. That way, there’s no discoloration. However, IME, if I am careful not to overcook the eggs, there’s no ring even though I don’t crack before putting them into cold water.

and reheating the scotch eggs isn’t what causes the green ring. it was already in there.

As said previously, Scotch eggs taste very good served at room temperature, so that is always an option. My vegetarian version recipe states that the eggs can be refrigerated overnight after they’ve been breaded and then fried the next day. The overnight rest would help set the coating, too. I haven’t tried the overnight rest yet but plan on doing it next week. I don’t see why it wouldn’t work with the traditional sausage version, too.

the kids I reference above usually ask me to refrigerate them, then they throw them on the ice and have them as a quick meal once they’re underway.

According to this bunch, they work well for breakfast (eggs and sausage!) lunch or dinner. And the adult leaders agree. Apparently they keep disappearing by the half-eggs in the night…

Thanks for all of the suggestions! They were great, a perfect satisfying dinner. I wasn’t in the mood to cook tonight and it worked out well - perfect at room temperature. I followed your recipe Savour and I think next time I might leave them in for a few more minutes to see if they brown up a little better but honestly despite appearances they were a hit! 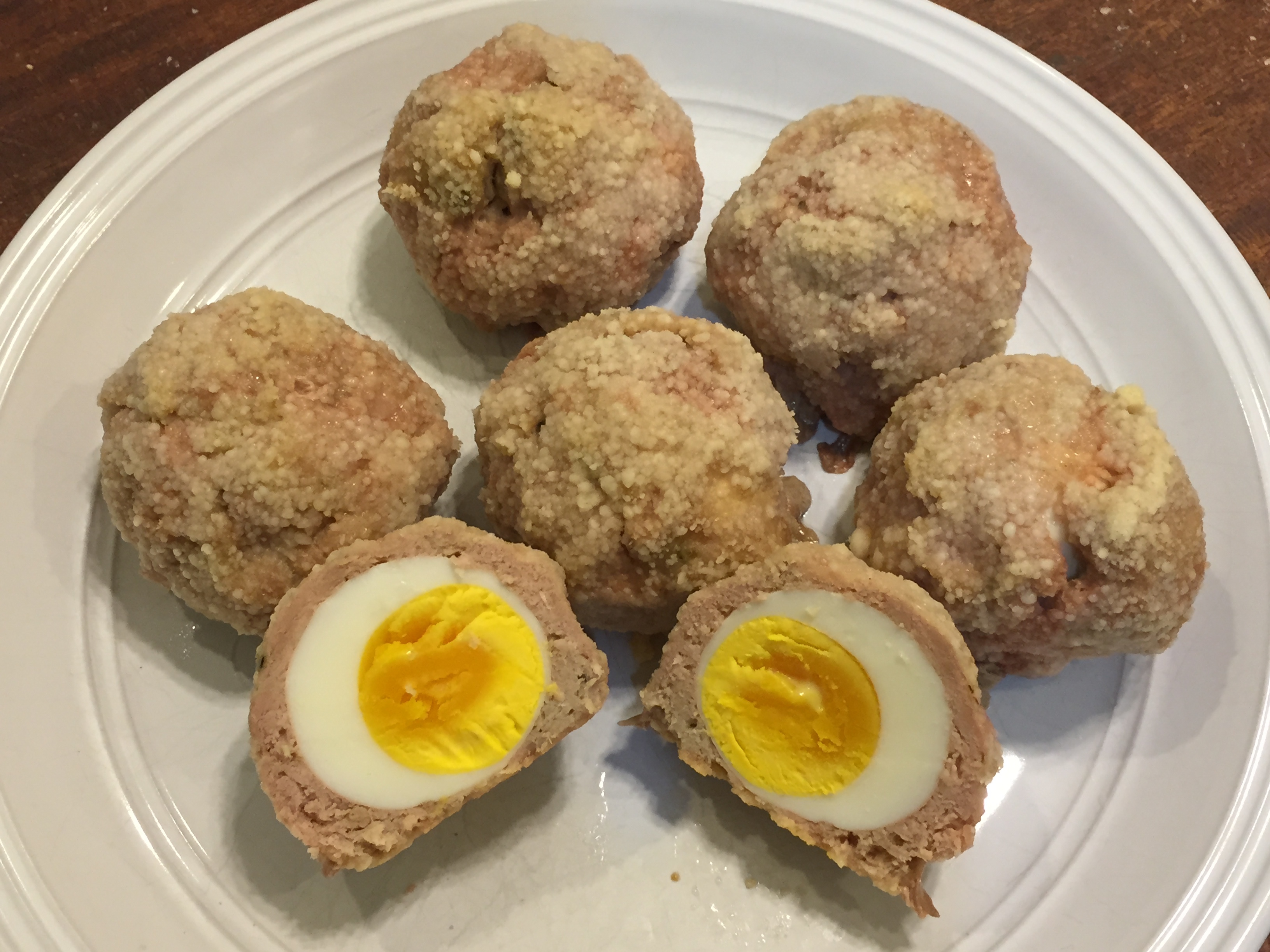