After Jr’s post about some lobster mac n cheese at cuzins, I wanted to start a new topic.

Let’s talk mac n cheese! In December I was in St John and had a great dish. It was mac n cheese topped with pulled pork and fried onions. Yum! 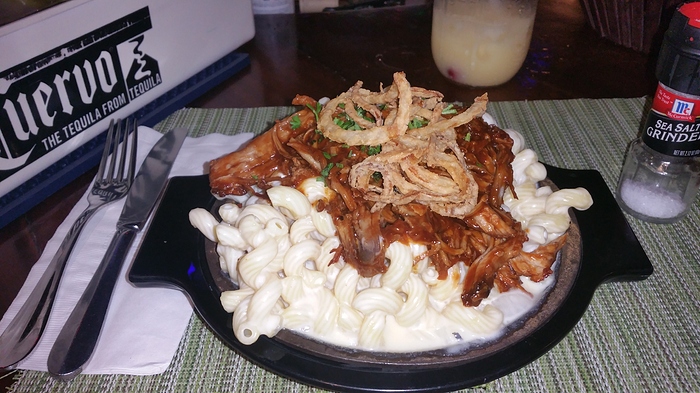 The best mac 'n cheese recipe I’ve found came via a friend in the mid-90s. It’s from Saveur…well worth the time it takes to make and the cost, imo! I only make it when I’m having a big crowd, so I double or triple this recipe and it never disappoints.

Preheat oven to 350°. Cook 1/2 lb. medium elbow macaroni in a large pot of boiling salted water until tender, about 6 minutes. Drain, toss with 2 tbsp. butter in a medium bowl, and place in a baking dish.

Heat 3/4 cup milk and 3/4 cup cream in a medium saucepan over medium heat.
Season with salt, freshly ground white pepper, and a pinch of cayenne.

When cheese melts, pour sauce over macaroni and mix well. Sprinkle with 1/2 cup bread crumbs and dot with 2 tbsp. butter.

This recipe was first published in Saveur in November/December 1995.

At home my favorite two mac n cheese recipes are 1.) Use a port wine cheese spread, cut with some cream, the port wine gives it a very nice flavor and generally produces a pink colored end product. Not everyday you have pink mac n cheese.

2.) Equal parts “cheese product” like the kraft block of cheese, melted into a cream of tomato soup. Mixed with pasta (elbows) in a pan, topped with bacon, then baked in the oven for about 30 mins. Let all that bacon grease melt into the dish. Yummy (this was my grandmothers recipe)

Actually CJ you mind if I move this to a general cooking board rather than leaving it here on the NJ board? Probably get a lot more traction on the Home Cooking board.

Best Mac N Cheese I’ve had was from Clairmont Tavern in Bernardsville, NJ. It’s around $5, very filling. Has beer in the cheese sauce and some kind of crumbles on top.

One time I found a recipe to dress up store bought Mac N Cheese at home with Italian Salad Dressing. I forgot how much, but it was really good.

I was going to make some for a bunch of women, some of whom I knew needed to be careful about carbs, but then I do too … so I got this bright idea, and instead of making a white sauce and melting cheese into it, I cooked a pound of elbows until they were JUST soft enough to bite through, drained and then buttered them. I grated about three cups each of cheddar and Fontina, combined them and divided by three, then beat a couple of big eggs into 12 oz (1 can) of evaporated milk plus about a half-cup of cream. Put a third of the mac into a casserole, spread a third of the cheese over, and did that twice more, then poured the milk/egg over, and put that into a 350º oven until it was nice and browning a bit on top. Okay, so it’s not health food exactly, but it’s got plenty of protein, and since then I’ve started adding chopped up little tomatoes (the baby San Marzano-type ones Trader Joe’s has) and chopped canned or fresh-roasted green chiles.

Oh, and it was a big hit and remains a favorite, which is why I’m putting it here.

My favourite additon is dried porcini. If you soak a few dried porcini and add the soaking liquor when making the Béchamel for the cheese sauce. Then finely slice the soaked porcinis and add at the end. It gives a real oomph to the flavour.

The last really great mac and cheese I had at a restaurant was at a BBQ joint in Amarillo, TX, with bacon and green chiles. It was incredible!

Being a low-carber, I rarely make real mac and cheese at home, but I have developed a pretty good substitute dish using tofu in place of noodles. The sauce is the important part anyway, right? I always include a small amount of Velveeta or other processed cheese in my sauce, or alternately a bit of sodium citrate, which is a food additive that will make even the crumbliest aged cheddar melt smoothly instead of separating into a grainy, oily mess.

One thing I’m not a big fan of is putting eggs in (baked) mac and cheese. IMO there is plenty of starch in the pasta and/or bechamel to tighten up the sauce (sometimes too much, actually), and the eggs just dry it out and give it a too-fluffy, almost souffle-like texture that is just not what I want in mac and cheese. I can see putting an egg in a stovetop preparation to thicken it, sort of like a carbonara, but I really don’t care for the egg flavor in what is supposed to be a pure cheese dish.

tofu in place of noodles.

As a fellow “low carber” can you elaborate a little more on the type of tofu you use? (I’m not very tofu astute but I’m always interested in alternatives so please use some basic tofu terminology. lol) I’ve primarily used cauliflower as my mac substitute, it really comes out more as a cheesy mashed potato than mac n cheese. Tofu might be interesting, is there a tofu noodle?

Tofu might be interesting, is there a tofu noodle?

There are tofu noodles, called shirataki, but I just use firm, extra firm or super firm tofu (not silken). I rinse the blocks well and then press them on paper towels for a while to remove as much moisture as possible, then cut the blocks into pieces about the size of macaroni noodles. I make a cheese sauce on the stovetop, stir in the tofu, top the whole thing with more cheese and/or crushed pork rinds (depending on my mood) and then bake it until brown/bubbly.

As for the cheese sauce itself, I find that you need something to thicken and stabilize it a bit since there is no starch to keep the cheese from separating or thicken the casserole as it cooks. I use cauliflower puree for this purpose - I use a pound of frozen cauliflower for enough cheese sauce to coat three blocks of tofu (they’re usually 12-16 oz blocks depending on the brand). Boil it until completely soft, then drain and puree with a bit of dairy (sour cream, half and half, whatever). It should be thick but pourable. At this point, I dump it into an oven-safe skillet and start adding cheese (LOTS)! You need a good strong cheese flavor to mask the flavor of tofu, so I generally use a mixture of gruyere, aged cheddar, Velveeta and any other odds and ends I have in the fridge drawer, plus some powdered mustard and a shot of Frank’s hot sauce (the vinegar really perks everything up).

I’ve served this to a lot of non-low carbers and although they can tell the difference, everyone has always enjoyed the dish. My husband prefers it to m&c made with pasta, because the tofu version stays very moist/creamy whereas pasta will tighten up as it sits.

a bit of sodium citrate, which is a food additive that will make even the crumbliest aged cheddar melt smoothly instead of separating into a grainy, oily mess.

biondanonima, would you mind sharing your technique for the sodium citrate? Do you blend with a hand blender or just whisk? And, do you add it after the bechamel is finished? I have some and decided that I wanted to use it the next time I make mac and cheese. We love the flavor of my sauce, but the aged cheddar can make it grainy.

I just stir it in, no major whisking or hand blending necessary. It dissolves pretty easily. Usually I add it before I add the cheese, and then judge as I add cheese whether or not it needs more. It doesn’t take much but you can sort of see it getting grainy if you’ve added too much cheese and need a little more SC.

Oh, thanks! I’ll try it next time and report back. My son makes lots of cheese sauces with sodium citrate, but he hasn’t made a conventional bechamel mac and cheese, which is our default comfort food.

BB Kings in NYC makes a fine mac n cheese.
At home, we use large elbow macaroni, a combo of cheddar, fontina and mont. jack to make a creamy cheese sauce. My wife tops with toasted panko bread crumbs and smoked paprika.

After years of making mac and cheese from scratch with varying degrees of success, I ran across this article and picked up some of boxed stuff at Aldi, (3 for $1).

I haven’t followed any those recipes exactly, but in three different attempts, I’ve made some pretty good renditions.

The last one incorporated leftover smoked sausage, pan fried with fresh poblano and jalapeno peppers. I also crushed some Ritz like crackers and sprinkled over the top with melted butter.

Much easier and virtually full proof.

July 14 is National Mac&Cheese Day. Maybe because of French preeminence in the cheese world, on Bastille Day? Midsummer seems a strange time to highlight a rich, hot, rib-sticking calorie bomb, but the forecast here in New England is for unseasonably cool temps so I may participate.

Of course by now, you all may have seen this article. There may be a paywall, but essentially, there are high levels of pthalates in the powdered cheese mix, which leeches out during the manufacturing process. Which scares me with a 2.5 year-old who loves his mac n’ cheese. Specific brand names weren’t called out, but I can’t imagine there would be much difference between most brands.

Bottom line: Make your own, which will be cheaper and more delicious anyway. 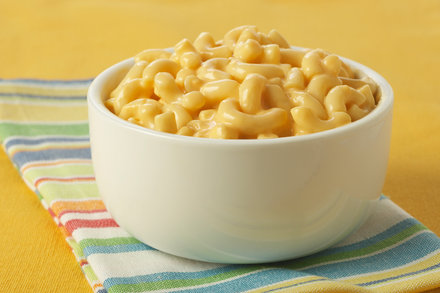 The Chemicals in Your Mac and Cheese

Macaroni and cheese products were especially high in phthalates, chemicals that may pose special risks to pregnant women and young children.

This is the first cool day we’ve had in NYC in two weeks so I think I will make a small batch also since I have some cheese and chiles I’d like to use up.