As previously, here’s a roundup of interesting things I ate in London in May 2019. Would love to hear others’ opinions on these places, or recommendations for any under-discussed or out-of-the-way places I should try.

I’ve now been to all three branches of this small chain (and indeed discussed the Bromley one in my October 2018 roundup). This time I was on my own so just had one dish: sea spiced aubergine with minced pork (photo). The aubergine was rich without being greasy, and the proportions of pork and aubergine were just right. The sauce had a decent balance between sweet, salty, and spicy, with a good hit of ginger too.

Again a simple lunch for one, consisting of falafel with hummus and broad beans with yogurt (photo of both). The falafel were crisp on the outside with a soft interior, and the hummus had good texture and flavour. The broad beans had been podded and mixed with dill and chopped peppers. None of this was complicated but it was done very well.

Here I had slow roast tomatoes with feta, basil, and a slow-cooked egg on sourdough toast (photo). The tomatoes had an excellent flavour and very thin skins, which is a good choice if you’re roasting them. The egg was similar to an onsen egg, with runny yolk and wobbly white. All was seasoned just right.

Behind the PVC-framed shopfront and decal-covered windows is a small but unexpectedly comfortable and ornately-decorated dining room. Gol gappa (photo) had fresh, crisp, and entirely leak-free shells (you’d think this should be a given, but in my experience it’s fairly rare). Steamed pork momo (photo) were made with good-quality well-seasoned pork, and steamed exactly right, neither too chewy nor falling-apart. Perhaps the star of the meal though was the side dish of spinach in garlic sauce (photo) — again perfectly seasoned, and with a lovely smoky taste that I suspect came from tempering cumin seeds in oil.

Very good tortillas enclosing the tacos here (photo); just the right amount of roughness in the texture, and soft enough to easily bite through while robust enough to maintain structural integrity despite juicy fillings. The fillings themselves were a little disappointing; the vegetables in chipotle were a little dull, while the pulled pork included fat and skin (good) but also hairs remaining in the skin (not good). "La torta" made up for it — black beans, queso fresco, spinach, tomato, onion, and avocado inside a great bread roll, light without being insubstantial (photo).

Another visit to this out-of-the-way cafe previously discussed in my April/May 2018 roundup. I keep coming here because it’s good, even if it is in the middle of nowhere. The bread they make their sandwiches from is excellent, structurally sound even when sliced thinly, and with a lovely chewy crust and soft interior. This time I had their version of a Reuben (photo), with pastrami, a nice sharp cheese, and sliced gherkins instead of the sauerkraut. Everything was in proportion to everything else, with no one flavour dominating (I really am not a fan of sandwiches where they pile in a ridiculously huge amount of meat.) All their tea is loose-leaf, including a decent lapsang souchong.

I was intrigued to see a vegetarian nasi lemak on the menu, so had to try it (photo). Subtly coconutty rice came with vegetarian sambal chicken, two begedil (potato croquettes), and some fairly uninteresting (albeit perfectly fresh) salad. The vegetarian chicken was surprisingly decent, with a good umami flavour and gently warming chilli heat. The begedil were very nicely seasoned and rich without being oily; a minor execution issue led to one of them being a little chewy on one side, but I’d definitely order these again (they’re also available separately on the menu).

The service here is bordering on comical, but it’s all very well-intentioned and sweet. The owner was very keen to tell us about the specials of the day, including the ones he’d already eaten the last of, and at the end of the evening they seemed quite baffled by us wanting to leave a tip.

But the tapas were good, and extremely well-priced. We enjoyed a “big plate” of cheese and meat (photo), and some interestingly-textured chicken pate (photo). Sardines (photo) and squid (photo) were from tins, but good quality, and served on romaine lettuce, dressed with olive oil and red onions. Morcilla (photo) had a great texture and good flavour, and came in a very generous portion.

I was here with @ds, whose recommendation it was. (It was also Dean who recommended I try the Little Coffee Shop and Singapore Orchid, discussed above.) I would also recommend it if you’re in the area — maybe not worth travelling across London, but for me it’s certainly a good reason to go to Purley.

Thanks, Kake. Good review as always.

I like the sound of the broad bean/dill/pepper/yoghurt dish. I see that in my future next time we have a mezze at home.

Thanks John, glad you enjoyed it! That broad bean dish would definitely work well at home.

Thanks for your reports as always

Coincidence I was in Bromley today and had lunch in Sanxia & had exactly the same dish. I would have liked more chilli and a bit more pork but I did enjoy it. 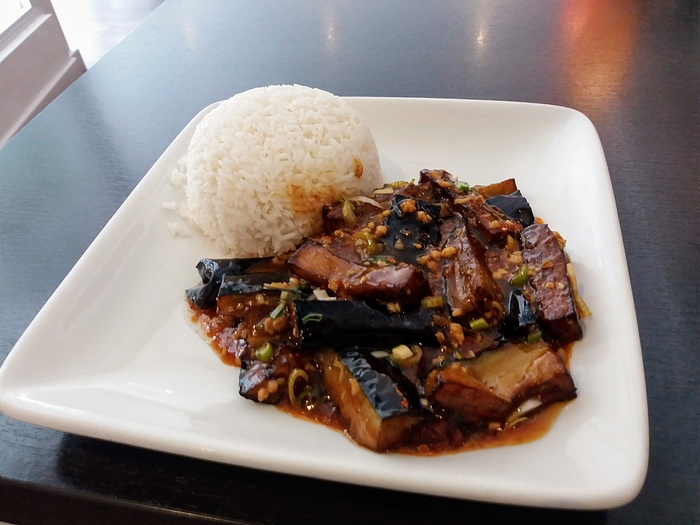 It was part of a lunch deal for £10.80 so I also got dumplings in chilli oil. I didn’t ask what was in them I assumed minced pork & I wasn’t wrong. I really quite liked these. 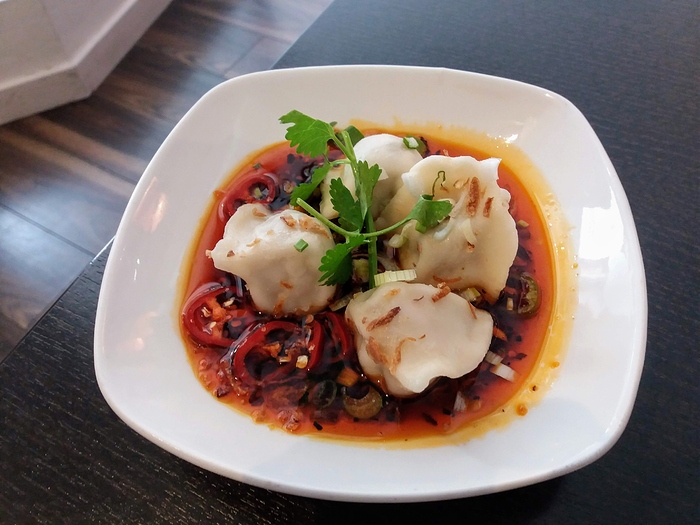 Coincidence I was in Bromley today and had lunch in Sanxia & had exactly the same dish. I would have liked more chilli and a bit more pork but I did enjoy it.

Definitely looks like you got less pork than me! And no red/green peppers either. It’s interesting; I’d have thought there’d be more similarities between the same dish in the same chain.

It was part of a lunch deal for £10.80 so I also got dumplings in chilli oil.

Three words that will put me in food heaven however they are used.

So back to Sanxia in Bromley yesterday afternoon. Nice to see if fairly full. Decided to not go for the value two course lunch menu I would rather pay more for a dish I really wanted. Opted for the claypot chicken & tofu with dried fish. The dish was very subtle , bordering on bland though there was nice fragrance of ginger. However the pieces of tofu and chicken that caught on the claypot and caramelised were really good. There was very little of the dried fish but when you got some it really provided a punch and lifted the dish, it needed more of it. 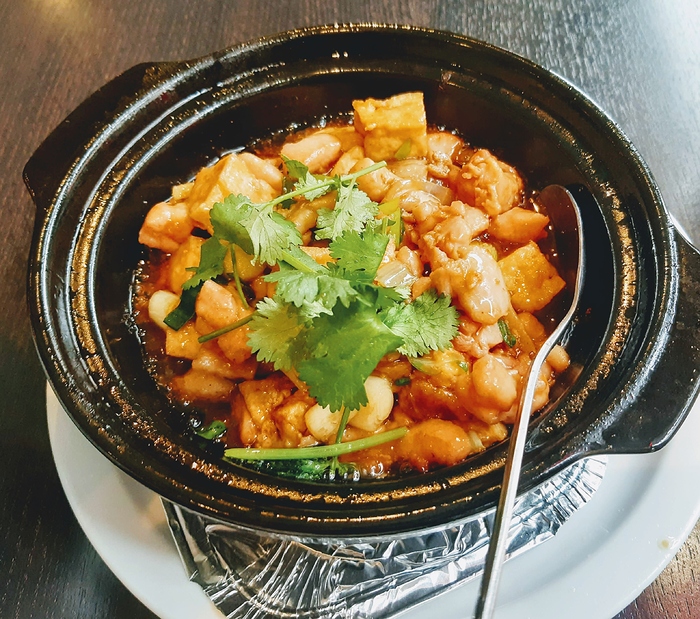 So popped into Bromley for some Xmas shopping. Popped into Sanxia for lunch. Had the braised pork with fermented vegetables. Beautifully sweet, soft braised pork belly with a nice funk from the preserved vegetables. The bok choi was welcome giving a veneer of being healthy. Best dish I’ve had there so far. 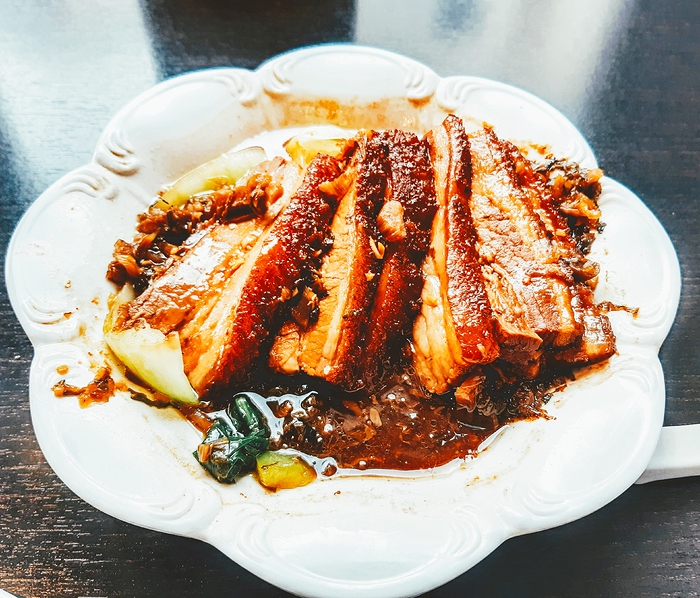 Popped into Sanxia for lunch. Had the braised pork with fermented vegetables.

I also have to report that the Sanxia in Deptford has now closed and been replaced by another Sichuan restaurant called Jinjiang (see menu on Just Eat).