As per last month, here’s a summary of notable things I ate in London during February 2018. Would love to hear others’ summaries too, or even just descriptions of one or two notable things eaten.

Although located in a distinctly non-upmarket area of London, this cafe is on the upmarket side, and like many of its neighbours is halal. On this visit I had a somewhat deconstructed breakfast muffin which included a fried egg, a slice of cheese, some turkey bacon, and a hash brown (photo). Once I’d put it all back together, it had a good combination of textures and flavours. The egg yolk was creamy with a runny centre, which worked very well. I have previously enjoyed their shakshuka too (photo).

This is not in any sense one of London’s new wave of Thai restaurants featuring punchy flavours, craft beers, hipster staff, and dim lighting. It’s firmly old-school, yet worth a mention for the perfectly-cooked vegetables in the ped kheemao (photo). The long beans were the best I’d had in quite some time, with a lovely snap of freshness. Aubergine (of the large purple type, not the small pea-like type) was also al dente, which I normally hate as it ends up all spongy, but here it worked really well. The duck and sauce were fine, but it was the vegetables that stood out.

JFores praised this on Chowhound several years ago, but even though it’s very close to my house it’s taken me all this time to try it due to being convinced it wasn’t open at lunchtimes (it is, just not on Wednesdays). I’ve only had the “express meal” (photo) and fish thali (photo) so far, and on both the standout dish was the fish. A small, whole fish in the “express meal” was throughly deep-fried to the point where the head and bones were edible, but they’d managed to avoid making it too dry. Mackerel curry in the fish thali was again cooked to just the right texture, and the sauce was rich and savoury. I intend further exploration of the menu, with more of a focus on their fish dishes.

This small casual cafe in a neglected open-air shopping parade has seats for just 8 people at regular tables and half a dozen more on high stools. I had a takeaway kingfish roti (photo), made with dhal puri style bread (two layers with a thin filling of seasoned split peas sealed in between). The fish was cooked just right, and I also liked the lightly pickled carrots and onions. A well-flavoured curry shrimp gravy was added in at no extra cost.

Thanks for the report. I see you post a lot around Croydon so I’m assuming that’s fairly local?. I’m in South London myself. I’ve come across a place in Norbury called Karachi Cuisine. It’s a Pakistani place as if you couldn’t guess from the name. A lot of the usual curry house stuff but they also do haleem, lambs brains and trotters and other less run of the mill stuff . Seems interesting I was wondering of you’d been there?

Yes, I live in Croydon, specifically West Croydon. There’s a lot of good food here for those willing to seek it out (also a lot of fairly uninteresting stuff that gets raved about by the local media and the council, but I think that happens everywhere).

I’ve had haleem and halwa poori at Karachi Cuisine and liked them both. (Also had a taste of a friend’s lamb nihari, and thought it very promising.) A few more details and links to photos are here. I’d happily go back and try more.

interesting! i have posted reviews for a couple of things last month. did i remember to do hawksmoor? I think so. i also revisited green papaya (both hackney and hoxton branches) several times and, while i’m not as impressed as most of my neighbours and the GP patrons, it’s a good-enough go-to for a bowl of something.

must argue with roti masters, though. my partner is of guyanese heritage and they’re big on roti there…so it’s made me very aware and fussy on roti. roti masters really disappointed us in many ways. i need to dig out my own review. thing is, when you know how something is ‘supposed’ to taste, it’s never the same anywhere else. i’m ok with innovations and variations but no, this didn’t cut it for us. i still hope to find the perfect roti. (the one by stoke newington rail station is surprisingly ok, though i rarely go) – debate?

for those in the north or east, don’t go to yum yum on stoke newington high street. that was one nasty lunch i had there. a thick enough to stand your spoon in coconut mass of noodles with a hint of thai spices and a few undercooked prawns laid on top is not a laksa - sorry!

thanks for your reviews. will bear them in mind when i venture to your neighbourhood.

I’d definitely be interested to hear your thoughts on Roti Masters, if you manage to find your notes. What are the most important aspects of a “perfect roti” in your view?

I’ll be heading to London in a couple of weeks, here’s what’s been scheduled:

Sushi Samba, Bishopsgate
Bolton’s in the City (best Dover Sole)
Benares, Mayfair
Park Chinois, Mayfair
Rules for lunch, for the history of it, always a treat
Duck & Waffle for breakfast

must argue with roti masters, though. my partner is of guyanese heritage and they’re big on roti there

If you do come to south London there’s a Guyanese place called Umana Yana in Herne Hill. I’ve not been but it’s supposed to be good. 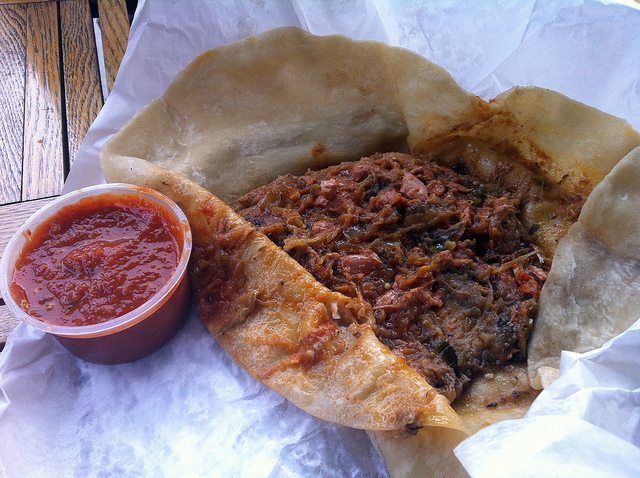 Where To Eat London's Best Rotis

if it’s guyanese roti, that visit is going to happen! and the review will follow. thanks for the suggestion!

Only one I’ve been to is Duck and Waffle - is it the Bishopsgate one? Or the new Duck and Waffle Local at Piccadilly Circus? Anyway, D&W City branch has lovely but EXPENSIVE food but with the most amazing view - if anything though, Sushi Samba has a more intimate view just by being one floor lower. Have you booked SS and D&W? They are booked up weeks in advance.

I have no idea where I put my notes and don’t seem to have an online review - weird. However, I mostly remember it not tasting so great, being a bit shocked at the low hygiene rating, and the tamarind sauce being very difficult to eat - too many chunks in it. A perfect roti? To me it has lots of fabulous gravy, contains a good amount of mashed potato to round out the flavour, is tender and savoury, with a good bite (but add the hot pepper sauce - the yellow one!) and is wrapped in a dalpuri. my favourite is chicken and eggplant (aubergine) and with the potato it practically melts in your mouth. i want some now! i haven’t found a great one in london but when i’m in toronto there are a few exceptional ones.

my partner says to tell you that afro guyanese roti and indo guyanese roti are different too (he prefers indo). and stay away from the jamaican ones. most guyanese are precious about their roti but will bow to the trinidadians if they have to.

Have you tried roti joupa in Clapham? Their hot doubles are quite something and the rotis aren’t too bad.

And oh, they are Trinidadian at Joupa.

Only one I’ve been to is Duck and Waffle - is it the Bishopsgate one?

Yes, we are going to the Bishopsgate location, didn’t realize a new one opened, is it also 24/7? I’m looking forward to the view. We have prebooked all our reservations weeks in advance. Some, like one I forgot to mention, City Social near the Tower of London, made us actually choose a starter, main and dessert when taking our reservation! That is so heavy handed, IMO. How do I know what I will feel like eating weeks from now. We will have 10 dining for that meal though so maybe that’s why. Still…it feels like large parties are discouraged.

Interesting, thanks! I haven’t had their tamarind sauce but will ask about it next time. (I should mention that their hygiene rating seems to have improved since you were there, and is now “Generally satisfactory” overall and “Good” for food hygiene and safety.)

Rules for lunch, for the history of it, always a treat

Mrs Harters is suggesting a day trip to London to see the Picasso exhibition at the Tate. I may try to persuade her that we should make it an overnighter so we can have for dinner at Rules. It’s still my favourite place in the city.

If you do come to south London there’s a Guyanese place called Umana Yana in Herne Hill. I’ve not been but it’s supposed to be good.

I am curious- any idea what Guyanese food is like. Is it close to Caribbean food?

I have not had Guyanese food. The place I recommended is quite local and I pass it quite often and keep meaning to go in. I’ve had Jamaican food a lot of times and been to tried roti joupa in Clapham which is a Trinidadian place. I had curry goat but with a roti rather than rice and peas (which is typical in a Jamaican place) so I am assuming the food of all three has similarities.

Chris - are you now back in the UK or still travelling?

Been back in London about a month now. Bit of a culture shock but at least I can get a scotch egg and a decent pint of bitter now.