This is quite late, sorry — I was ill for most of January and busy for most of February — but is an attempt to continue the series begun in my November 2017 roundup. So, below is a summary of notable things I ate in London in December 2017 and January 2018.

This Persian restaurant opened around 5 years ago, and expanded into the next-door space 4 years later. I have only ever managed to have the stews here, not yet the grilled meats, since the stews are almost universally delicious. Those involving okra and aubergine are particularly recommended, since they get the cooking of the vegetables just right; soft and unctuous without being overcooked. Many of the stews include lamb, which again is cooked to a perfect softness. Fesenjan is on the regular menu, though I’ve only had it once and didn’t take detailed notes. My most recent meal here was in late January.

A long-standing stalwart of the London dim sum scene, notable for its taster platter (photo) which allows for solo dim sum lunching. On my most recent visit just before Christmas, the standouts on the platter were the prawn and Chinese chive dumpling, with lots of flavour from the Chinese chives, and the two dumplings which involved sweetcorn; the corn was just perfectly cooked, and not overly sweet.

This Young’s pub and hotel is very close to Richmond Station, and gets very busy on days when there’s rugby on at Twickenham. Luckily it was a non-rugby day when I popped in for lunch in December. I ordered from the brunch menu, choosing the sausage pattie in a brioche bun with cheddar and fried egg (photo). The sausage meat was good quality and well browned, the cheese was flavourful without being overwhelming, and the egg was very good, with a runny yolk, whites properly set, and crispy round the edges.

This three-for-a-pound naan bakery recently started doing stews and kibbeh for eat-in or takeaway, and also expanded its naan menu to include variations such as cheese naan, chilli naan, and zataar naan. Their chickpeas with lamb are beautifully cooked; the chickpeas are a decent size and nicely soft (bigger and softer than the ones in cans from the major supermarkets), the broth is nicely flavourful, and the lamb is on the bone and tender enough to cut with a spoon. I didn’t take a photo the most recent time I had this, which was just before the New Year, but here’s one from a few months back, along with a (hot, crisp, fresh) egg naan.

One of London’s very few Palestinian restaurants. Lentil soup (photo) was delicious; well-flavoured, and with a smooth, not-too-thick texture. This small portion did seem oddly overpriced at £5, especially when the same price was charged for the arayes, a generously-sized pile of grilled flatbread stuffed with lamb mince (photo). The bread was fresh and had a crisp crackly surface with just the right amount of chew in the interior, though unfortunately verging on burnt in places. The lamb was underseasoned to my taste, though the sprinkling of sumac on top went some way to remedying this.

Thanks, Kake. Interesting stuff as always.

I’ve never eaten Palestinian. Are there differences with the more common Lebanese/Syrian food?

This was the first Palestinian restaurant I’ve been to, and I only tried a couple of things, so I can’t say much about how it differs from other cuisines in the region. You may be interested in some photos I took of a display at the Palestinian Museum in Bristol last year, though: board 1, board 2.

you travel in areas i don’t go to often but that’s a good thing since i’ll know where to go and not to go when i do get there! i’m completely off carluccio’s these days but when i go i get the antipasto plate and substitute the roasted peppers (which i can’t digest - annoying allergy to have since they are everywhere!). used to love their lasagna until they started skimping on ingredients. that’s just happening everywhere, though, isn’t it?

have you been to the korean places in new malden? it’s on my list but i’m fussy on korean - like great kimchi and lots of side plates - and wouldn’t know where to start.

Exploring London is kind of my thing

One of my long-term projects is walking across every page of the A-Z to see what I can find along the way: http://www.earth.li/~kake/atoz/display.html (click on the lines for more details and links to photos).

I’ve tried several of the New Malden places, but not recently. Here are links to some of my writeups, but bear in mind the dates:

I’d say the spicy raw crab at Palace is the thing that really sticks in my mind.

thanks for this. am also intrigued by the randomness site. what is it exactly? (yes, i’m that lazy that i didn’t check further! blame this niggling headache.) palace sounds the most interesting - but was it? i can’t eat crab so that’s a bummer but…
also is the paying for side dishes standard in the UK? it has been everywhere i’ve been so far. in toronto six free, small but instantly replenished side dishes always appear and i suppose i’ve been spoiled by it. that and the constant flow of free tea - i like the korean one which i suppose is barley or similar. can’t believe here they can charge up to £3 for some…now i feel nostalgic and homesick!

am also intrigued by the randomness site. what is it exactly?

It’s a website where some friends and I write about nice things in London, like pubs and restaurants and knitting shops and bookshops and museums. The idea is that it’s more wiki-like than blog-like, in that each article may have been written by several people collaboratively, each with their own preferences and expertise. Also it’s organised by area and category (e.g. you can look at pubs in Pimlico, or cafes in Croydon, or even step-free access in Stratford) rather than by date, since many of the articles have information from multiple visits over several years.

palace sounds the most interesting - but was it?

Yes, I think so, though I wasn’t comparing them directly at the time.

also is the paying for side dishes standard in the UK?

It seems to vary. Some places give them free, others don’t.

As a follow-up to the New Malden question, here’s a recent roundup by MiMi Aye (aka meemalee).

Fabulous! I just need several stomachs so I can try everything. I can’t believe how long it’s taking me to get over there

I’ve been to Abshar a couple of times now, the last time with my parents so we were able to try most of the stews between all four of us!

Gormeh Sabzi – lamb, fenugreek & dried limes. I really liked this, but my wife didn’t. The lime and fenugreek give a pretty punchy, sour and herby taste, may be something you have to grow up with. Picture below. 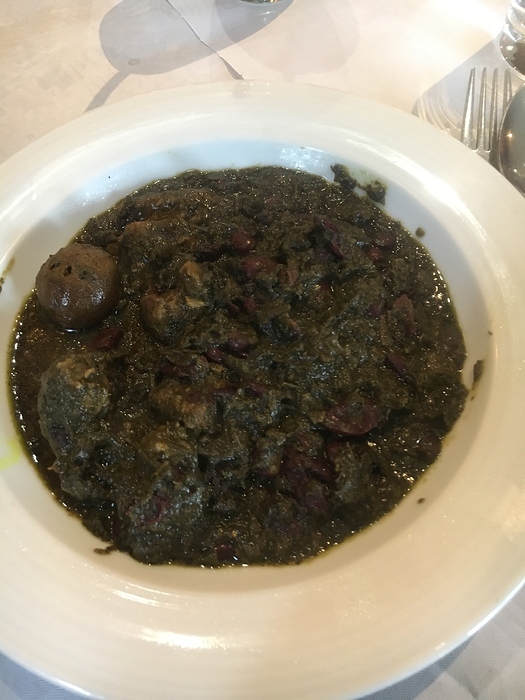 Khoresht Bademjan – lamb and aubergine. My wife preferred this to the Gormeh Sabzi. Picture below. 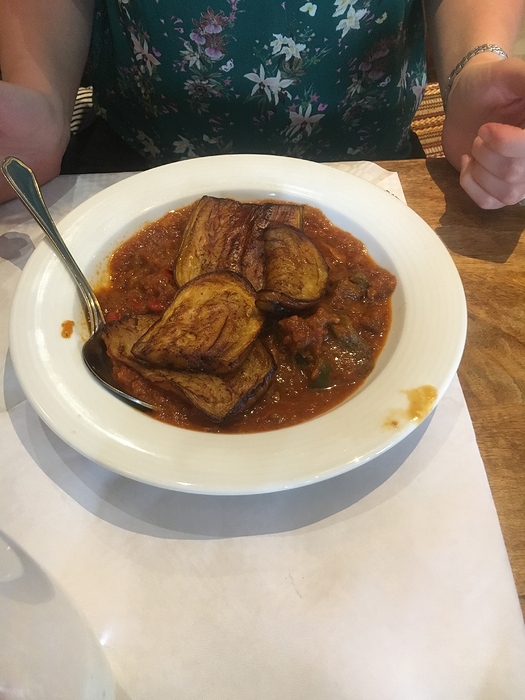 Sorry I forgot to take pictures of the other dishes!

Khoresht Baamieh – Okra and lamb. Okra is always is always a bit divisive so this got mixed reviews

Khoresht Fesenjan – Chicken in pomegranate and walnut. This is quite sweet. I liked it, but wouldn’t have enjoyed the sweetness so much if it was my only main. My mum, who has a more western palate, didn’t really enjoy it.

Khoresht Karafs – Lamb stew. This was the crowdpleaser, everyone liked this. Probably because there were no flavours that were odd to the Western palate.

Overall, all the stews were pretty well cooked and had really diverse flavours. They all come with copious rice. They have a naan oven at the back of the restaurant, which fascinated my son. Naans were ok, but not the highlight. Next time I will pop in and try some of their grilled dishes.

Thanks @kake for recommending!

Very glad you liked Abshar, Dean! I’m keen to hear what you think of the grilled meats — maybe one day I’ll be able to tear myself away from the stews.

Yes! If you are feeling up to it and want to pop along together at some point let me know.

Maybe even worth organising a Chowdown (or whatever we call them on here)?