Met up with some Singaporean friends who’re long-time residents in the UK during my visit to London last week. And nothing gave them more pleasure when “meeting a guest from the old country” than to have a meal at a Malaysian/Singaporean eatery in town.

Anyhoo, we lunched at Normah’s Cafe in Queensway Market. Interesting location - the tiny cafe was hidden inside a warren of small shops at the back of Queensway Market, book-ended by a Russian hairdressing salon on one side and a Russian video shop on the other. I wouldn’t have found this place by myself. 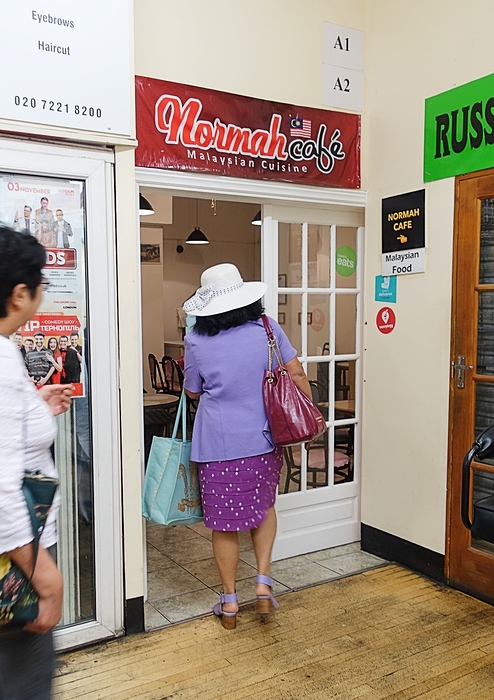 Proprietress-chef, Normah Abdul Hamid, cuts a motherly figure, and pretty much runs the kitchen by herself, assisted at the front of the house by her nephew, probably the worst waiter in London.

Surmount the challenges of having a waiter reminiscent of Manuel in Fawlty Towers (I kid you not!), and you get to savour Normah’s hearty home-cooking. Normah’s Malay cuisine comes from her Johorean (southern Malaysia) background - richer in coconut milk, lesser chilis, slightly sweeter, reminiscent of the Singapore-Malay cuisine (Johore and Singapore is separated by only a 1 km wide Straits of Johore, and shared the same culinary heritage) which I’m weaned upon. Comparatively, the kitchen operator-chef at the Malaysia Hall Canteen nearby, Mdm Hairani Muhammad, was from Pahang, a Malaysian East Coast state with its own regional cuisine - spicier, somewhat less piquant renditions of the similarly-named Malay dishes.

We started of with some curry puffs - Normah makes two types - with curried potato filling, and with sardine filling. Her spiral-shaped pastry shells were crisp and flaky. 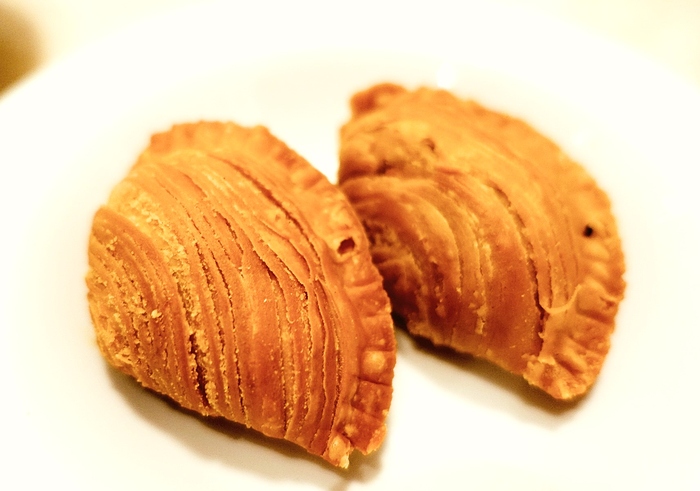 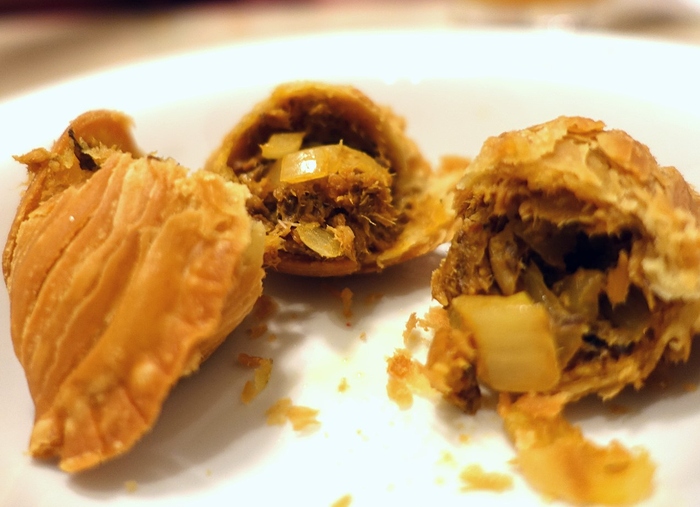 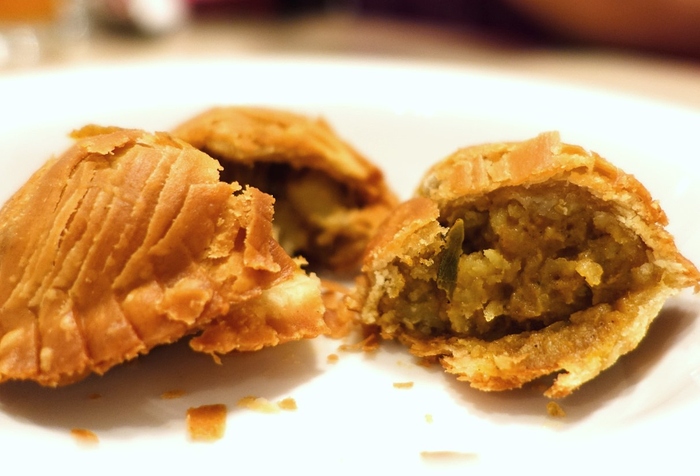 Comparatively, the Malaysia Hall Canteen only makes curry puffs with curried potato-chicken filling, where carrots and peas were also added. Its curried filling also had curry leaves, giving it a more aromatic scent: 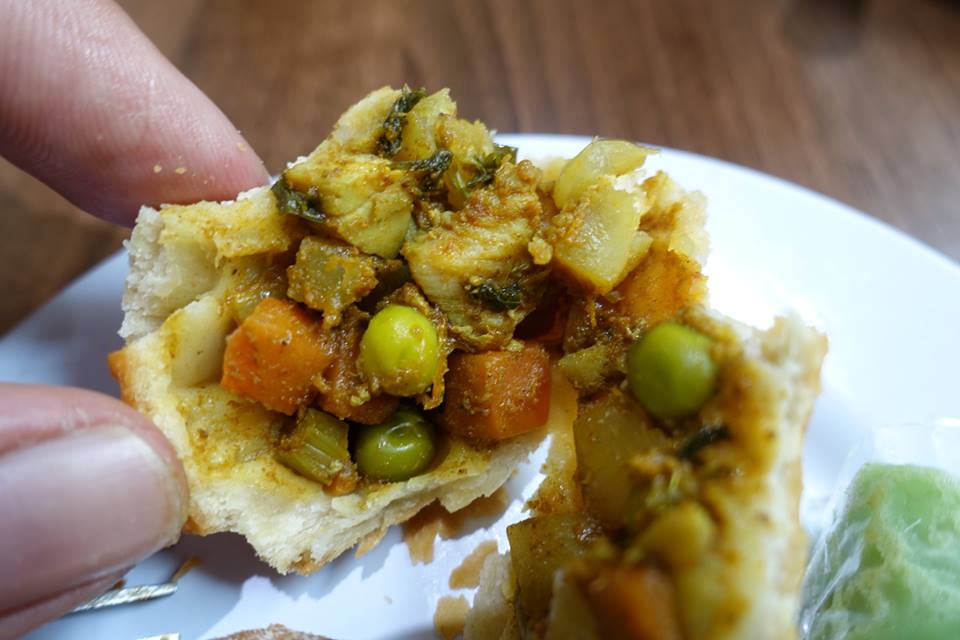 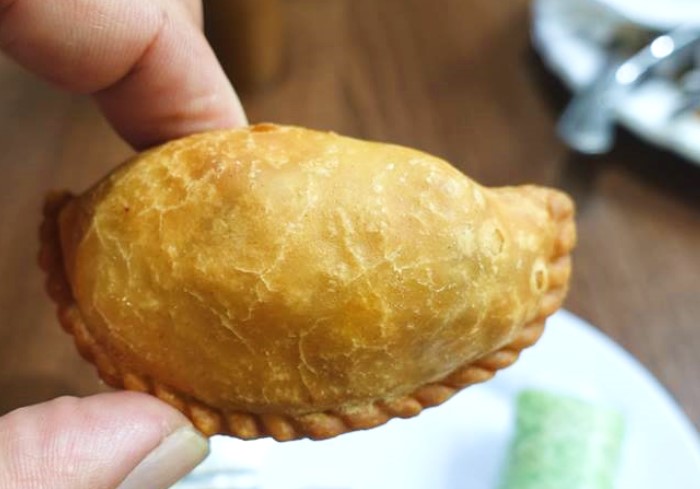 The best dish, IMO, at Normah’s was the Roti Canai with Beef Rendang - her buttery-flaky roti canai was toothsome, more reminiscent of Trinidadian “buss-up-shot” than the traditional lighter, flakier Malaysian version. Her beef rendang tasted amazing - the beef was slow-cooked till fork-tender and, flavour-wise, had a depth of flavour which I didn’t find in any of Malaysia Hall Canteen’s curries. 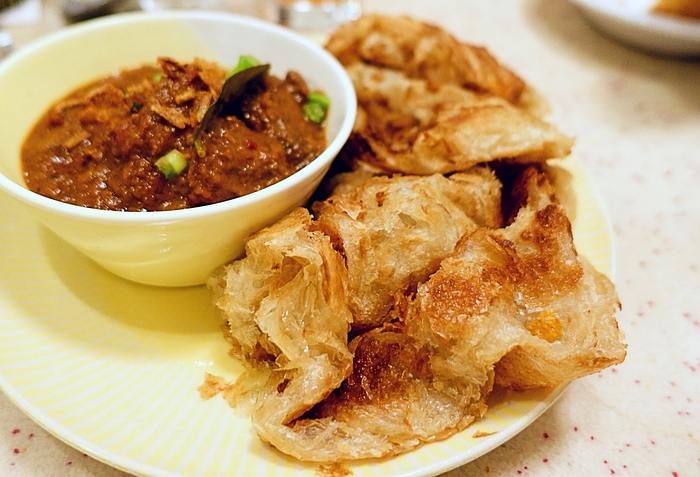 We ordered a couple of chicken dishes to share - between the two, the Ayam Goreng or fried chicken was better - batter-fried drumlets. I think the batter is a mix of flour and tapioca flour (which is common in Malay-style batter-fried chicken) which gives the crust a slight chew. The chicken was moist and delicous, with a slight turmeric scent. 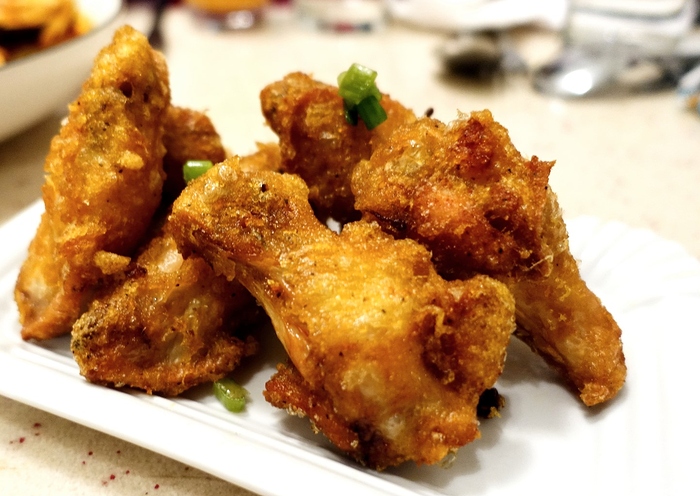 The other chicken option we had was the Chicken Curry, which was probably a daily special as it was ordered by one of my dining companions, although I didn’t see that on the cafe’s concise menu. The curry came with 5 whole chicken drumsticks and potatoes. I’m not a big fan of chicken dark meat, so actually skipped the meat and only tried the curry gravy with the potatoes - pretty tasty but, even by Johore/Singapore standards, was pretty mild, chili-wise. 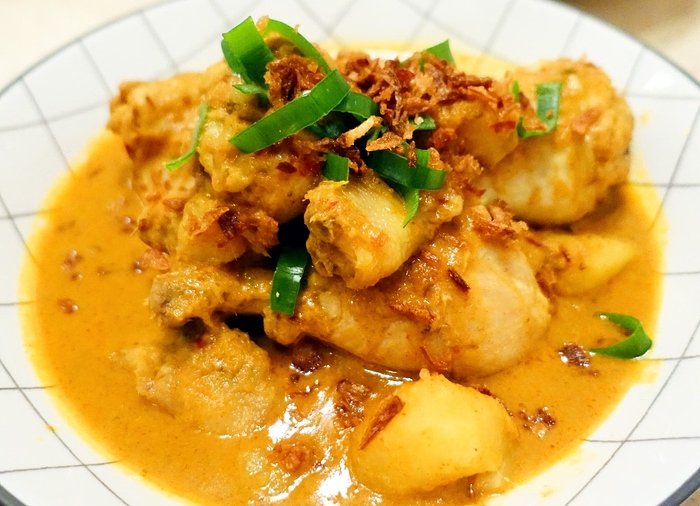 Assam Pedas with Seabass - this sour-spicy dish was a big hit with my dining companions. Assam pedas is a common dish in Malaysia and Singapore - more a liquid stew than a soup, which gets its dominant flavours from the use of tamarind pulp and chili paste. I find the version here to be pretty tame & perhaps a bit too mild for my liking - but that’s probably because I just arrived in London, whereas my friends are all resident here already, and whose palates have adjusted to the “localised Malay” flavours. I found the chopped scallion-golden fried shallots topping on the dish to be pretty weird though - maybe to add colour to the dish. Anyhow, it’s an indication that the food here has been adjusted to suit local tastes. 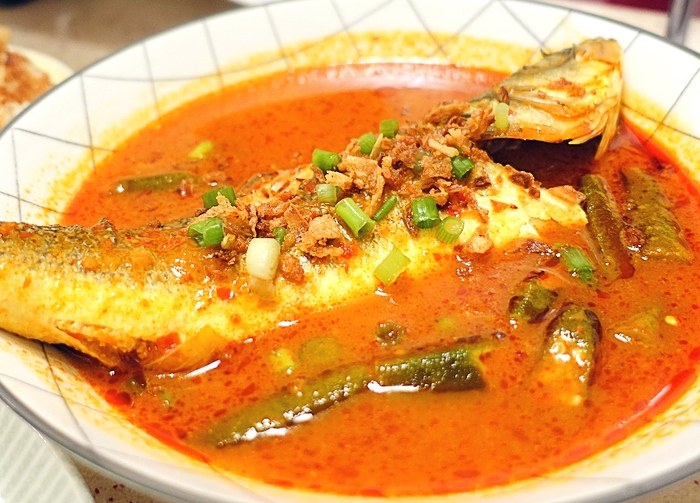 Nasi Lemak with Fried Chicken - a pretty good rendition here, with coconut- and pandan-scented fluffy steamed rice, accompanied by a spicy sambal, fried chicken, hard-boiled egg, fresh cucumber slices, and fried groundnuts. No ikan bilis/crisp-fried anchovies (which I also did not see at Malaysia Hall Canteen’s rendition of the Nasi Lemak).
THe texture of the rice here was perfect but, flavour-wise, I preferred the version at Malaysia Hall Canteen where ginger shreds, chopped purple shallots and fenugreek seeds were added to the rice (besides the coconut milk and fresh pandan leaves) - a Pahang touch which I rather liked, giving the rice a more aromatic scent & flavour. 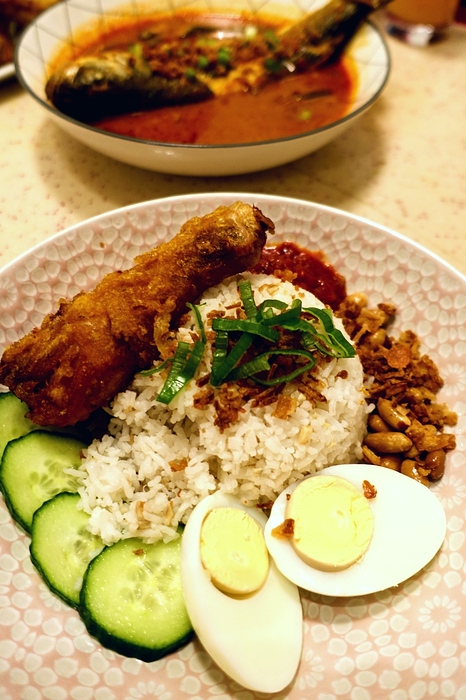 Curry Laksa with King Prawns - Normah’s version of the laksa is neither the Singapore Katong Laksa, nor the Johore Laksa, but her own creation using a thin fish-based curry gravy, topped with tofu puffs, fresh king prawns and hard-boiled egg. Yellow Chinese-Hokkien noodles were used (in Singapore Katong laksa, we use thick rice vermicelli, whereas Johore laksa uses pasta). Again, I found the flavours here to be pretty mild. 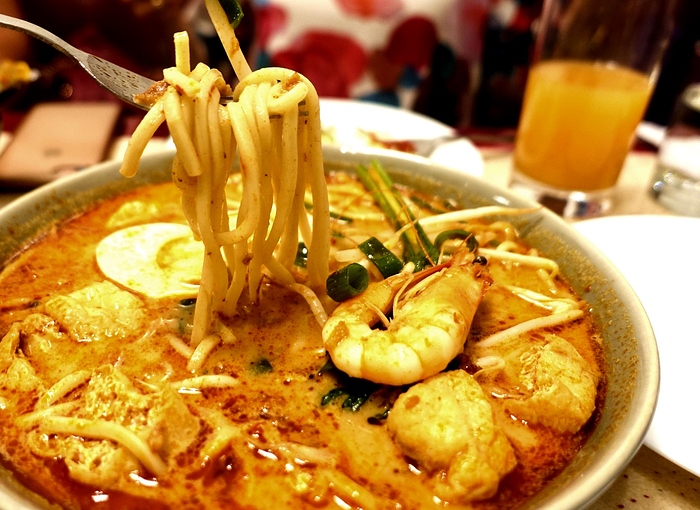 Mee Goreng - Normah’s rendition is a Malay version of this otherwise fiery “Mamak” (Indian-Muslim) dish. A pale-coloured, blandish rendition of the dish. 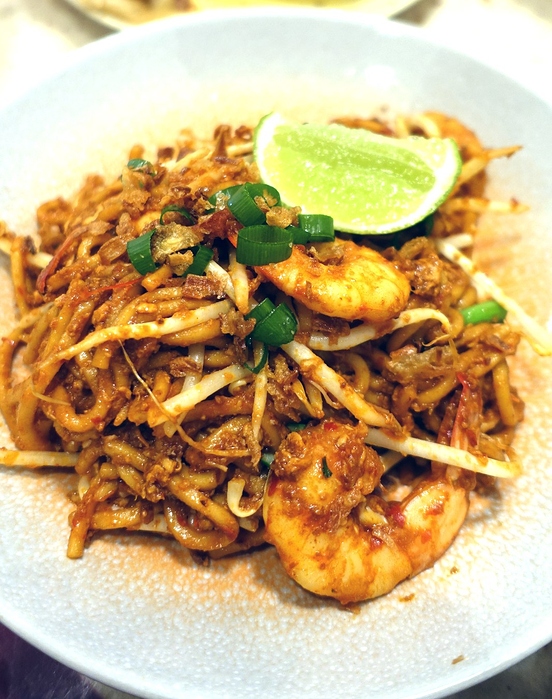 Sambal King Prawns - a dumbed-down version, in terms of chilis, of the dish I know from home, but the fresh, de-shelled prawns were really good. Again, I didn’t see this on the menu, and wasn’t sure if my friends ordered this off-menu, as they are regulars here, or whether it’s a daily special. 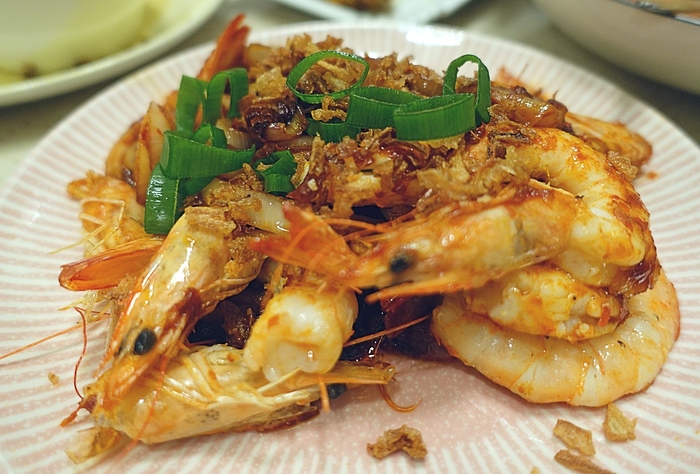 It’s a pretty good place for a taste of reasonably-priced Malay home-cooking.

Did you order before you arrived? I ask because I was there a couple of months ago. When I turned up they were a bit perplexed that we hadn’t pre ordered. I had some pretty good ayam penyet. The chicken was beautifully cooked. 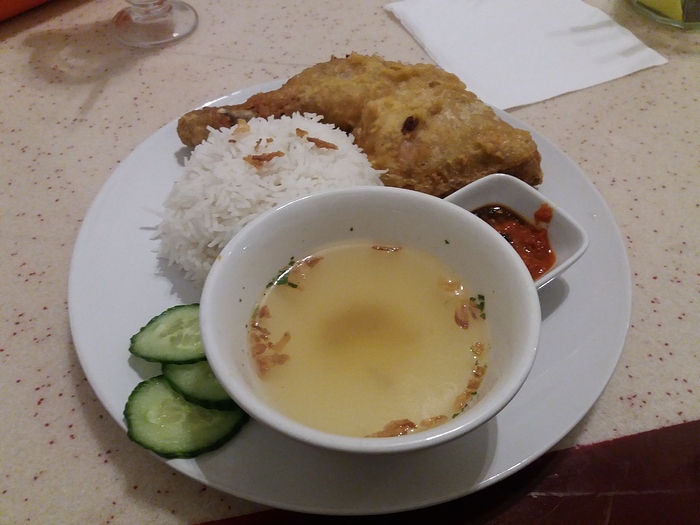 normah 1.jpg4128×3096 809 KB
As we were the first customers of the day we got some sardine curry puffs gratis.
It is hard to find & I wouldn’t have found it if it wasn’t for the Malaysian Food Lovers FB page.
The eponymous Normah posted a lovely video explaining how to find it. Normah was every bit as lovely as she appears in the video.

Did you order before you arrived? I ask because I was there a couple of months ago. When I turned up they were a bit perplexed that we hadn’t pre ordered. I had some pretty good ayam penyet. The chicken was beautifully cooked.

We didn’t pre-order anything. Did you encounter her nephew, the “Malay Manuel”? One of my friends who’s a regular wrote down all our orders and passed it directly to Normah - just to be sure there’re no mistakes.

BTW, it seemed that she’d stopped offering Ayam Penyet, as the item was crossed off the menu.

Although owner-chef, Normah, is from Malaysia’s southernmost state of Johore (bordering Singapore), her cooking embraced the whole range of Malay food which she felt would appeal to the small Malay diaspora in London, plus other customers who wanted a “taste of Malaysian cooking”.

She did not offer any typical Johore dishes like “kacang phool” or “laksa Johore”, like these ones I had in D’Timer Cafe, Kuala Lumpur , recently. Hopefully, one day, Rosmah would deign to offer some authentic Malay eats from her home state.

Being a Singaporean transplant to Kuala Lumpur since 2011, I was always on the lookout for Johore-Malay cuisine, which is similar to Singapore-Malay food that I am familiar with, rather than Kuala Lumpur’s rather mixed bag of regional Malay foods which are heavily-influenced by neighbouring Negeri Sembilan. I found KL-Malay food to be more chili-spicy than its Singaporean counterpart, less aromatic, less sweet, and less complex in its spicing. Singapore-Malay food is often categorised as Johore…