I have used leeks for many years, just about always in an aromatic base for Italian, and other, recipes, for soups. (just made a nice Umbrian soup with beans and grains we bought on our last trip to Norcia…still fine after 3 years or so.

Pasquale Jones used to have (maybe still do) a fantastic leek dish with walnuts…had I realized I was not to return for (as it turned out) more than 2 years due to the pandemic…I would have tried to wrangle the recipe from them. (Excellent place, with WoodBurningOven and superb pizzas).

So with only a recipe from NYTIMES, I made braised leeks the other night, so easy, and they were a smash combined with rice and Peconic Bay scallops. I will urge all of you to try experimenting the use of leeks beyond as a base for soups, but on their own.

Also, give me your own recipes for this often-neglected vegetable. I do not even their season…

Thanks so much for this, and for welcoming me to HO while I was bereft at the closure of CH.

I don’t have any recipes, but I’ll tag along! They are often offered as a substitution by my CSA.

Welcome to HO!! We are very happy to have you here!

I discovered early on in the pandemic that a spoonful of sauteed/braised leeks makes almost anything taste better, including the dish that revealed this to me: a very undistinguished sausage, some borderline cherry tomatoes and the last third of a can of white beans. Since then I have pretty much always had a stash of already-cooked (sliced) leeks in the freezer that I can use a spoonful of in whatever I am making.

Also: leek gratin. Trim and halve leeks lengthwise, put cut side down in a baking dish, add plenty of heavy cream, S&P. Bake at 375 until most of the liquid has been absorbed.

Lastly, leeks vinaigrette. Braise halved leeks held together at the bottom with a bit of the root end (not the hairy part though) then drain and while still hot add a very mustardy vinaigrette. I brought this to a party once and took a lot of trouble with the presentation - twirled each leek half into a nest and put a black olive it it - and it was one of my most successful contributions ever.

I don’t know if you have access to NYT Cooking, but we have had this shrimp and bean stew both with onions and with leeks. It was notably better the time it was made with leeks. Same could be said for this white borscht.

Oh and these Turkish olive oil braised leeks are stupendous. I do have a note to measure things and not wing it – better when measured. 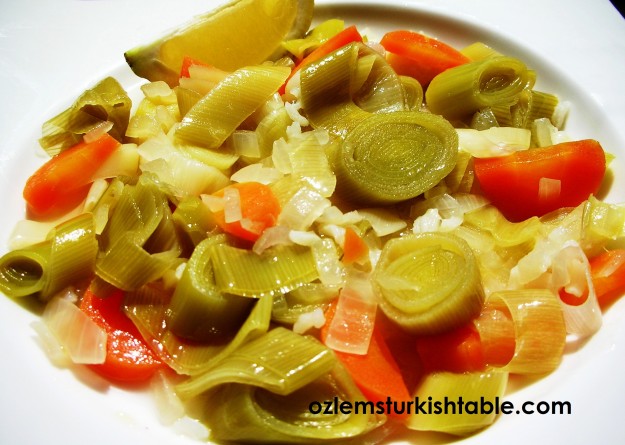 Leeks are around all through the year these days and they are native to Anatolia, along with carrots. This "Zeytinyagli"(vegetables cooked in oil) recipe is wonderfully refreshing and comforting all…

A little of topic but my son and DIL are in Turkey right now! I always ask for them to bring back olive oil, but I’m wondering if there might be anything else you mentioned in the cookbook you might recommend.

I actually have that recipe saved from long before the cookbook (which the website predates by a lot) and I think it’s one of two Turkish dishes I have ever made (the other being aushak which I learned a lot about from someone on CH about 15 years ago). But isn’t your DIL Turkish? Surely she knows the best goodies to bring…

That’s true. And I still have a lot of stuff from their last trip. Except for olive oil.

Based on the fact that I love the NYT’s Lemony Shrimp and Bean Stew with leeks, I looked at the White Borscht recipe you linked. That looks right up my alley! Thank you so much, it may wait for fall but it will get made.

Count me as another leek lover.

Leeks, like most alliums, become incredibly flavorful when charred. The difference between using raw or softened leeks as an aromatic versus with a charred surface has to be experienced to be believed. Stocks are transformed.

We often just slice them (1/4 inch, not too far into the green part) and cook them gently in a bit too much butter with s&p. Using an unlidded pan and stirring them (1 leek per head) over a low-medium heat takes about 10 minutes to produce a lovely soft side dish. As a variation stir in a handful of frozen peas for the last few minutes. Perfect with roast lamb. 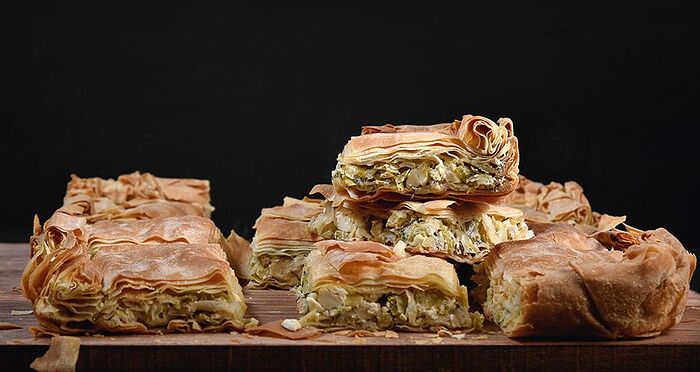 I use leeks in loads of things including frittatas, gratins, chicken pieces with various pan sauces, mixtures of roasted root vegetables, and, my favorite, risotto. Leftover leek trimmings always end up in the freezer bag for roasted vegetable stock. That bag usually includes ends of onions, carrots, celery, mushroom, and heads of lettuce as well as tomato navels. Leek trimmings always make it better. Try them in your next soubise.

leeks - scallions - shallots . . are mostly interchangeable with onion depending on the dish.
they bring a slightly different flavor profile, which is often a good change up.

examples:
eggs salad with shallot
tuna salad with leek
mushroom-onion compote for fish/steak - any of the three make a nice change.

But don’t they need different cooking times and maybe even techniques? I sub them, but leeks seem trickier. I thought they needed more time than the others, which can sometimes be used raw. Can you use leeks raw?

Cooking times definitely vary with type and cut size, but generally, I think the white part of the leek can be used more or less interchangeably with shallot/onion/scallions (I often sub or supplement with it when I have it).

It is edible raw. I don’t think I’d eat the green part of the leek raw, due to how fibrous it is, but if it’s well cleaned I don’t see why you couldn’t.

try then in coleslaw - while I’ve got the mandolin out for the cabbage, I slice the leek…