Given my Love/Hate (OK, mostly Hate) relationship with LC, I’ve forgotten most of what I knew about how their designs have changed, dating pieces by style and color, etc. So I was puzzled last weekend when I saw the pictured roaster in a local junk shop. 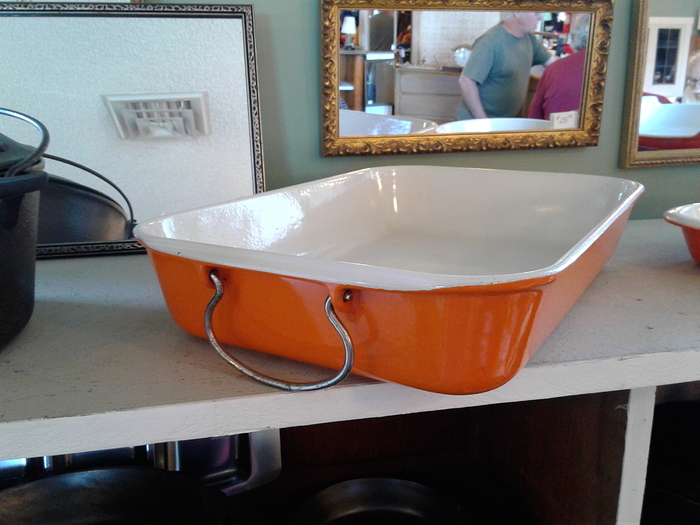 Until seeing the folding wire handles myself, I would not have believed it. The pan is “Flame”, so it must be older production. It was in quite good condition, and reasonably priced.

Is this thing common or rare? Is it collectable, or was it in a junk shop for a reason? If anyone here has one like it, can you tell me its age?

I have a yellow one that was purchased in the mid 70’s.

I haven’t used it for maybe 20 years. The interior doesn’t seem to be as sturdy as other le Creuset, but that may just be my habits of the time.

So remind us about the love and the hate?

I ask cuz the local Tuesday’s has a boat load of Staub they can’t seem to give away. . . And I keep thinking I oughta buy the large casserole. But I kinda don’t want it because it’s hella heavy.

Do you pretty much hate all ECI or just LC??

(PS: I have a cheapo Chantal ECI round casserole and a Portuguese earthenware pot & both seem to get the job done. Is there something I’m missing??)

The “love” part was that, as a young adult, I invested heavily in many pieces of LC. I thought it would help make me a better cook. And it was pretty, and French and expensive, so I thought I was set for life.

But it really isn’t very good cookware, and I got frustrated, and my cooking did not progress. I blamed myself, and lost interest in getting better.

Then I learned the truth about it, tried some better-performing cookware, and realized I’d wasted thousands of $ and many years. In short, I realized I’d been had, taken in by the lie that cast iron heats evenly and the status branding that allows LC (and Staub) to keep fooling people. The fact that they change their paint colors so that the House Beautiful crowd will buy the newest colors also grates with me.

Now then, there are some pieces that are better than others. The pieces that are used only or mostly in the oven are OK. The skillets (esp. the large ones) are an abomination, as are the saucepans. The only pieces I use these days are the LC pate terrine, the LC fondue pot, the Staub mussel pot and one of the large LC roasters. I also kept a LC braiser, but only because I haven’t yet found a good copper pan in that particular size.

K, so Ima take that $250 and put it toward a truly awesome casserole from Brooklyn Copper. Got some sheckles in a jar, just waiting for the new kitchen, which is now prolly more likely happening Christmas. (Grin.)

Anything to report on the new cookware line?

Smart move. BCC is hella expensive, but over a lifetime (or 8) of happy cooking in it, the cost is reasonable.

I once considered analyzing exactly how much I misspent on LC, calculating the interest. But it would just infuriate me to prove that I could have financed a very nice batterie once and forever.

I’m amazed how a discount house can make $285 seem like a good deal on something I don’t even really want.
Also that no one has entered the fray. . . Maybe the whole subject got beaten to death Over There. But I sort of miss some of the heated exchanges. . . .
Possibly no one can even think about bubbling casseroles in the midst of a heat wave. Probably that’s why all that pretty Staub’s sitting on the Tuesday shelves getting elbowed by Emeril crap and Circulon.

Maybe the whole subject got beaten to death Over There

No, I don’t think that is. I think it is just that not many people here love Le Creuset. Not a lot of people say things like “My Le Cresuset gave me the most even heating of all cookware” or “My Le Creuset is indestructible”

I’m sure you’re right. And I shouldn’t miss the bickering. Maybe friendly bickering is dead?

You’re onto something. I think many of the more serious (and seriously open-minded) home cooks moved here.

Chowhound chose this outcome, ostensibly because we greybeards made some of the site’s boards too clubby, inhibiting the newer, younger ad-viewers.

Is Jim Leff still apologizing for/justifying everything they do? Is VIP Georges still Captain?

I would have bought that roaster!

My LC dutch ovens are the workhorse of my kitchen.

But I agree that their skillets and saucepans suck. Not sure why the skillets do, since they are CI. Ive used them at my SIL’s house who, like Kaleo, bought them because of their name and not for their performance.

Probably. I haven’t visited CHOW for a long time, so I don’t know what it is like anymore.

My LC dutch ovens are the workhorse of my kitchen.

But I agree that their skillets and saucepans suck.

My sentiments exactly. Generally speaking, at least for me, ECR is great in the oven and terrible on the stovetop, although we have a LC saucier that works pretty well. I was at my daughter’s house recently trying to make a grilled cheese for my grandson on her LC skillet (they think anything non-stick is poisonous or something), and it was a joke – it stuck like glue, despite liberal application of butter.

My most consistent involvement in cookware from childhood was Revereware for the stovetop, and ceramics for the oven/microwave. For a time, I almost entirely pulled away from stovetop cooking–relying on a convection microwave and a toaster oven. I never used anything cast iron or anything ECI except one small bean pot.

When I switched to induction for stovetop cooking, most of my Revereware didn’t work at all, and several pans were badly warped. Magentism ruled: aluminum and copper were out completely.

That’s when I replaced my Revereware with cladded pieces–and discovered the Dutch oven concept, first with Le Creuset, then Staub. I never seriously considered cast iron or ECI for frying pans, and quickly rejected them for saucepans, but found them perfect for specialized one pot meals–both round and oval shape. The Dutch oven concept ECI can be totally stovetop, and/or put into the oven, then brought to the table–cleans up easily. The color and design are an added bonus. I’ve been able to expand use to a brazier and Wok like “perfect pan,” steam with an insert, and make pancakes on a crepe pan. I’m torn in using an ECI saucier.

For my style of cooking, the ECI of Le Creuset and Staub has become a critical part of my cooking batterie.

PM me if you are interested. I’m a regular buyer from this shop. The pan was 98% pristine. Don’t quote me, but I think the asking price was $65.

Onto presumably greener pasture now at Wallyworld. He sure left behind a mess.

For cast iron, the Staub ovens are among the best. If I were going to pay out long green for ECI again, it would be for the small Sarpeneva-design sold by Iitalia.