So, my one non-stick pan for the last 10 years (a Swiss Diamond) is showing its age. Anyone who’s read my posts about PTFE at the other site knows I think PTFE pans are potentially dangerous if overheated–consequently I’ve been extremely careful not to overheat this pan. Still, it has taken on a grunge that has mocked all my many efforts to remove. I mean, it’s clean enough after all the things I’ve tried, but it still has stains, mostly around the edges of the floor, not dead center.

This was an expensive gift to me, and I’d like to clean her up, at least for a decent burial.

So, what’s the mojo?

What kind of stains?

If it’s not been overly damaged by abrasion already, using a soft scrubber with a paste of water/baking soda may help. After gently scrubbing, let the paste dry, then rinse it off with hot water.

I’d make a paste of BKF, and dip a small pad of the finest 0000 steel wool into the paste. Pray. Then go, spot by spot, to the stains, and apply with a circular motion, for about 50 swirls per spot. Rinse with warm water. Repeat as necessary.

Agree. I’ve had excellent luck with that ‘recipe.’

I took Ray’s advice and broke out the 0000 steel wool. With BKF and water, very slow going. Speeded up a lot by making the paste/slurry with a spritz or two of Goo-Gone. Kept after it until a paper towel came away clean. 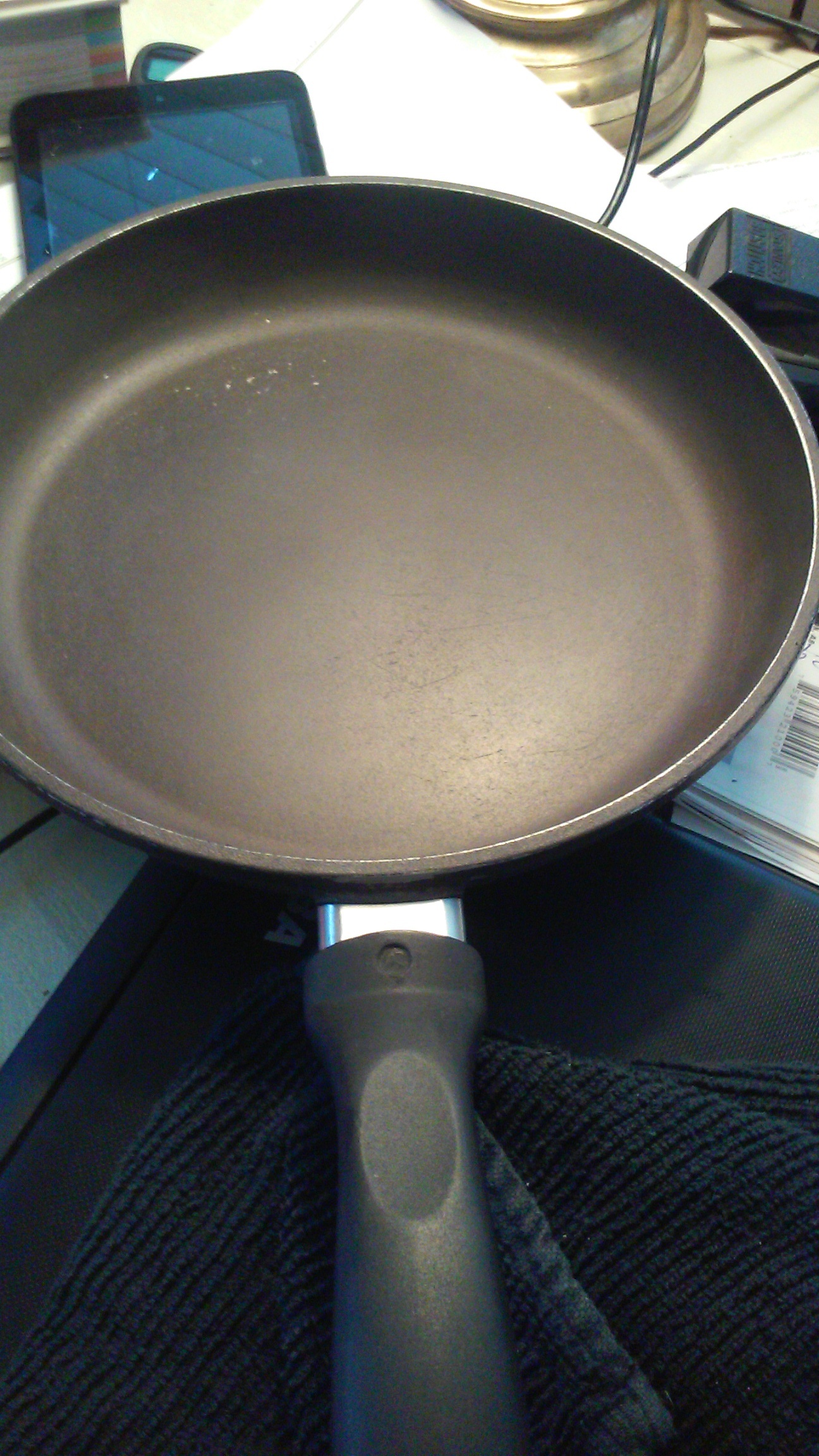 Good job, except are those worn away spots(at about 11:00) or spots on your camera lens?

Those were pre-existing dings–just hidden under the gunk.

I consider non stick disposable. Use until it does not preform with average cleaning then toss

Let us know if it is still nonstick…

The most I’ve ever done was a paste of baking soda and water. And I’ve only done that once with one pan. And mine seem to last forever.

My Swiss Diamond skillet totally abandoned me when I went induction, so I replaced it with a Zwilling “Thermolon” non-stick that I drove myself nuts trying to keep looking as new and shiny as the ones I see regularly on “Top Chef” this season. Meaning achy fingers from all of the pressure scrubbing with baking soda! Then one day my brain lit up and said, “Hey, Stupid, this pan is lined with GLASS!!! So think about it, Dummy, EVERYONE knows glass is hard as a rock!” So now I just scrub it out with SOS pads and don’t spend any time worrying about how it looks. After all, it’s the performance I’m after. If your Swiss Diamond pan is still non-stick, use it and just stop entering it in beauty contests! Poor thing. You’ll give it an inferiority complex! '-)

[just a quick heads-up in case you don’t know]

If you regret giving up your Swiss Diamond skillet, they also make special versions for induction cooktops. The model names of the induction-compatible models end in “i”.

If you regret giving up your Swiss Diamond skillet, they also make special versions for induction cooktops.

Thanks, TS. Originally I turned my back on buying the induction model because of the cost difference in favor of the “cheaper” standard model, but then turned around and bought the induction six months later. Hey, my Ouija Board was broken! Who knew? Fact is I was shopping for the induction model of Swiss Diamond when I came upon the Thermalon skillet on amazon.com, which is very forgiving about returns. I’m soooooo glad I gave it a shot, because honestly, I much prefer the Thermalon to Swiss Diamond. And once I recognized that NO cooking vessel in my kitchen has ever stayed new looking forever, I’m very happy with my ugly Thermalon that cooks like a non-stick dream and cleans easily with SOS.

Great to hear from you. Like me, the Swiss Diamond is not what she once was, in terms of non-stick.

Here’s the back story. This pan (the 9.5" skillet) actually was a good pan, and a lavish gift to me years ago. It made a solid 6 years of being dependably non-stick, and then faded. As you know, I’m unnerved by the toxicity of PTFE-heat byproducts, so I never overheated the pan.

Along about 2013, I got authorization to return the pan for replacement, but I never got around to it. This month, however, I contacted SD again, only to be told their warranty process had changed. Now, claimants must send hi-res photos of the pan back to the home office in der Schweiz. Initially, the Swissies balked, alleging I’d “abused” the pan. Hence the quest to clean her up to pass Helvetian muster. Thanks to Ray and Goo-Gone, the pan passed, and I should have a complimentary replacement in my hands soon.

If my Swiss Diamond pan had performed as advertised, I wouldn’t have been tempted by Thermalon. But based on experience, I’m sooooo glad I was! From all I’ve been able to find out about Thermalon, my conclusion is that it’s basically a variation on pyroceram, not too dissimilar of Corningware. I don’t think I have any Corningware cookware left, but I do recall that my Corningware cookware did discolor from excessive heat. A scientist friend said, “Of course it does! Have you ever seen the tiles on the space shuttle after it lands? Some tiles are outright black around the edges. Don’t worry about it.” So I don’t. But you and I do see eye to eye and then some on Teflon. It’s nasty!

Interesting to know and to follow. The thing is that there are not so many professional cleaners ready to work with this. And that is the reason I am happy to find such one in my area.