Knife Recommedation: What are some good $80-150 Western Style Chef's knives?

The reason I asked this question is Victorinox and Dexter Russell are two great brands for “inexpensive workhorse” stamp knives in the price range of $25-35. Yet, what are some good Western knives in the price range of $80-150? Obviously we have the standard Wusthof and standard Henckels knives. What about the two slightly lesser known brands: F. Dick and Messermeister? Or better yet, are there better brands?

(for this discussion, let’s omit the Westernized-Japanese knives like Shun, Global, Tojiro…etc)

Not available yet, but what do you think of this proposed product and price point? https://www.kickstarter.com/projects/118233123/misen-cook-sharp

I’m interested in this discussion because I am planning to gift a young friend who loves to cook a first decent chef’s knife, since his eyes are wide having been using mine while being a house guest the past 6 mos.

Hey, just curious … if you don’t mind my asking, how did you hear about that knife? I ask because that person contacted me via my blog, so I’m wondering if you have a blog, too. Never sure how people find me.

Nope, someone posted it somewhere that I read, can’t recall where. It was not a personal email though.

I agree. It is a thread here.

Looks interesting. Bolster design does look better /more comfortable than my Wusthof Classic. Overall blade thickness looks a little thinner too which combined with a 15 Degree angle should require less effort to cut.

One concern I would have would be chipping from rocking on a 15 degree angle blade made with 59-60 hardness steel. Would like to see some harsh real life tests done on cutting surfaces other than end grain cutting board.

I did bring my Wusthof Classic Chefs down to 18 degrees on the Edge Pro which greatly reduced cutting effort & no chipping issues but it is a lot softer steel.

I would like to hear more from Kenji about it.

We have a separate thread on this knife.

J. Kenji Lopez-Alt Can Sell Me Anything Cookware

I have no resistance. I bought the Anova circulator on Kickstarter. Then the baking steel (which was just delivered but not yet tested), and now the Misen Chef’s Knife. I mean, how bad can it be?

The knife was pretty “thumb down” at Kitchenknifeforum. Kenji himself went over there later and explained and defended his recommendation, so you can read his response.

It is certainly a contender. I wonder if someone has played around with it yet. If someone really like it, then it can be a good recommendation – beside the standard Henckels and Wusthof. Nothing wrong with Henckels and Wusthof of course. It just would be nice to have more options.

Interesting reads. Lot of chatter on that knife forum.

I hope you get to read Kenji’s response. I couldn’t post it because I am at a different network and my network (not private) does not allow me to visit the kitcheknifeforums.

Now, I am at home. If anyone wants to know how Kenji himself defended his recommendation:

This is Kenji from Serious Eats here. I appreciate your concern about the site, but actually the new owner of the site (Fexy Media) has had exactly zero input in editorial decisions, and as a policy, editorial and ad sales are separate teams that don’t communicate other than for basic logistical reasons. Misen and Serious Eats have no relationship at all (and to be frank, as a kickstarted company that was just trying to raise $25K, they wouldn’t have had the funds necessary to advertise on Serious Eats even if they wanted to). Our ads are always clearly labeled and put together by a different team. Editorial content is created by the editorial team and is uninfluenced by any kind of externalities.

I wrote about this knife because I tested it myself and thought it was a great product. I admit I forgot to include dimensions in the review. I am in the middle of a book tour for my first book (yay!) and I wrote the piece more hastily than I would have liked, but I wanted to get the piece out before their kickstarter early backer period ended so our readers could have a shot at the $45 and $55 backer prices for the knife.

As far as some specific questions people had, in comparison to a tojiro DP, I find the design to be much more conducive to your typical western cook. It is light and nimble enough to do precision tip and chopping work with, but it also has a deeper curve than a tojiro, which makes rock chops and your average western cook’s slices more easy. It’s a hybrid shape that leans closer to Western.

I also prefer the bolster design with its back slop that makes gripping the blade more comfortable and easier. I see many home cooks who have trouble getting used to the blade grip, and I think this design will help them get there more intuitively. One of my other favorite mass market knives, the Misono UX-10 has a similar bolster design, which is what draws me to it in my drawer.

The metal is harder than some german steel, softer than some other Japanese, but I think it strikes a good balance between not being overly brittle and being easy enough to sharpen well. You always have to consider the needs of someone who doesn’t think about or isn’t willing to sharpen a knife themselves and how long that edge is gonna last them. This one is a good balance.

The name is “Misen.” I thought it was a reference to “mise en place.” I’m not sure where it actually came from. The similarity to misono I guess is there, but it wasn’t my first thought.

ANYHOW, as someone who’s actually held it in my hands and has been using it regularly, I can tell you that at least for me, it’s super comfortable, easy to manipulate, and really that’s what matters most when it comes to a chef’s knife.
KitchenKnifeForums Kenji’s defense of Misen knives

I am not promoting this knife at all. In fact, one person in that video made me chuckled (the way he speaks)

I’m old school (or maybe just getting old), but Kickstarter endeavors annoy me. It also annoys me I was hit up in two email accounts and on my blog to hear all about this damn thing over and over.

Was it the blond guy who made you laugh in the video? He did sort of have an odd, “oh, how dreamy” quality that seemed misplaced in a knife video.

Do you mean you are annoyed of Kickstarter in general of jut this Kickstarter? I guess I am lucky because they haven’ hit up on me.

Was it the blond guy who made you laugh in the video?

I was going to say “No, not the bald guy”, but then I realized you mean the blond guy. Yes. The blond guy who appeared in 0:40 (and later). He has this “Dude-ya, Yeah-ya. Dude-ya. Cool-ya. Total-ya” in his speech. I don’t know how to describe it. Kind of a little like this SNL sketch: 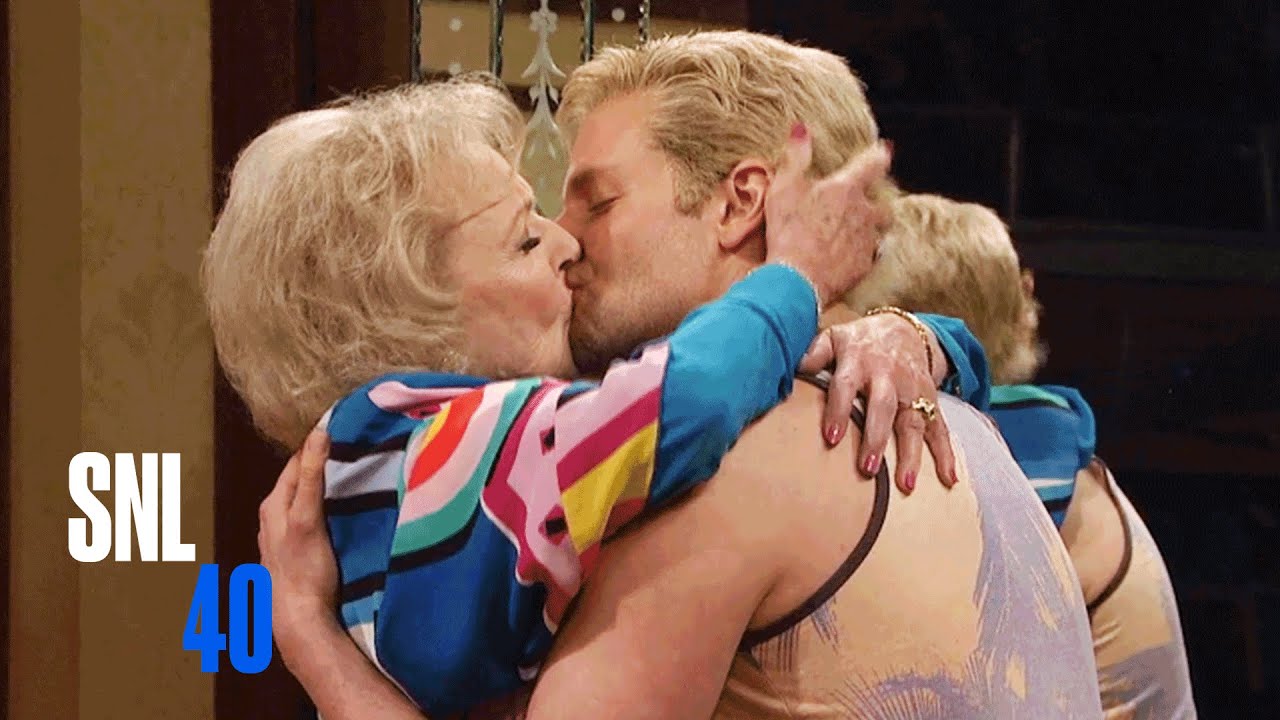 Yes, he really seems like he wants to sell me something other than a knife! He’s very much a Californian.

And, as to Kickstarter, yeah, just weird. And I plead old-fashioned Yankee here, but you know, “Hey, I wish I could build onto my restaurant, but just can’t get enough money together. Hey, community! WILL YOU FUND ME?” A restaurant in town did just that! It just seems out of place and not cool to ask people to back you just because you want to do something and can’t afford it. Not out of charity or anything else, you know? I mean, heck, I’d like to go to Italy and I don’t get paid vacation benefits–anyone wanna help me out? I’m not being serious!!!

The concept of a Western Chef’s knife with a thinner blade & a little more hardness & less angle is interesting. As I said, I brought my Wusthof Classic Chefs down to 18 degrees and love the results. I also don’t use it as a cleaver or cut down on hard surfaces.

One of the newer Henckle Pro line Chef’s knives with the angled bolster and the cutting angle brought down to 18 degrees might be very sweet.

Yeah, I don’t think that “Jeff Specoli” sounding guy brings a lot of confidence to the product promotion.

All this stuff about input from Chef’s seems a little hinky to me. Excluding specialty restaurants such as Japanese, the only thing I ever see in commercial kitchens are Dexters & Victorinox, 95% of which have plastic sani-safe handles. Most are provided by a service that includes sharpening.

Kenji’s stuff is a little better but a lot of specifics left out.

Real world comparisons to other similar knives with a long track record that people are familiar with would help.

Do you have any recommendation for a $80-150 Western Chef’s knife? Or Henckels and Wusthof pretty much the best there are?

Kenji’s stuff is a little questionable as you have stated. Moreover, it is kind of a future thing, so I feel it isn’t really an alternative until it comes on the market.

I have absolutely no complaints about my 20 plus yr old Wusthof Classic. At the time I bought it I was told it was made from one piece of steel where as Henckles were welded. Don’t know it there is any truth to Henckles being welded.

Either can be found in excellent condition on Ebay at a good price if patient.

I recently bought a Henckle knife with the angled bolster, a serrated version, for specific tasks,and I love it, as compared to my other ones from them, though the were also cheaper versions. Now that’s all I want for all of mine.

Til a prettier, sexier one in my price point catches my eye.

I recently bought a Henckle knife with the angled bolster 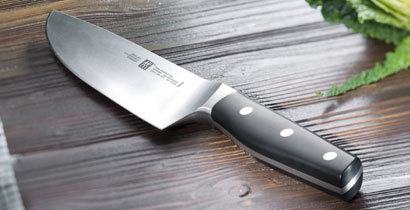 Wusthof Xline is also a looker too, but I haven’t seen one in person, I wonder if they are easy to find in the US, or they are mostly sold in Europe and through internet (in US):