Kampar in the state of Perak in Malaysia was a former tin mining town, peopled mainly by Cantonese and Hakka emigrants who came here in the late-19th century. Kampar was also where the World War II Battle of Kampar took place between 31 Dec 1941 and 2 Jan 1942, pitting 1,300 retreating Allied soldiers, mainly survivors from the 1st Leicestershire Regiment and 2nd East Surreys, remnants of the 1/14th Punjab, 5/14th Punjab and 2/16th Punjab Regiments, and the 28th Gurkha Brigade, against 9,000 invading troops from the Japanese Hiroshima-based 5th Division, who had 200 tanks and 100 artillery pieces.

The Japanese had intended to capture Kampar as a New Year’s gift for their Emperor Hirohito, and began surrounding the British and Indian positions by 30 Dec.

The pitched battle resulted in a rare Allied victory against the Japanese in the early days of the Japanese campaign in Malaya. The Japanese 5th Division suffered such heavy casualties that it was not able to take part in the subsequent Battle of Singapore.

Today, Kampar is a sleepy town of 100,000, better known as a midpoint pit-stop when one drives from Penang to Kuala Lumpur.

And one of the best-known eateries in Kampar is Heng Kee, which specializes in chicken rice, cooked in Chinese claypots atop charcoal braziers. 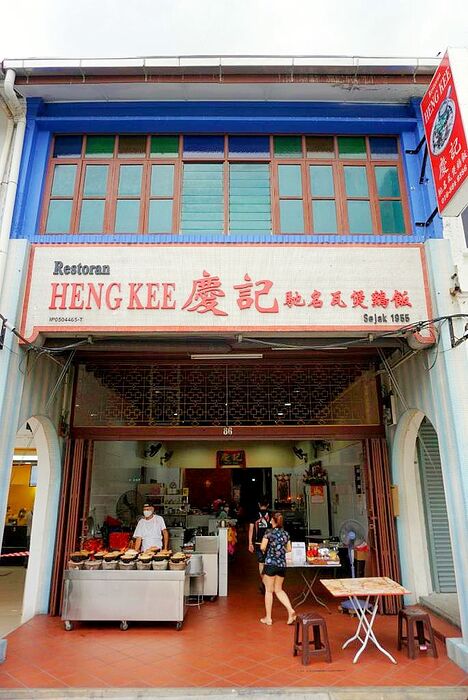 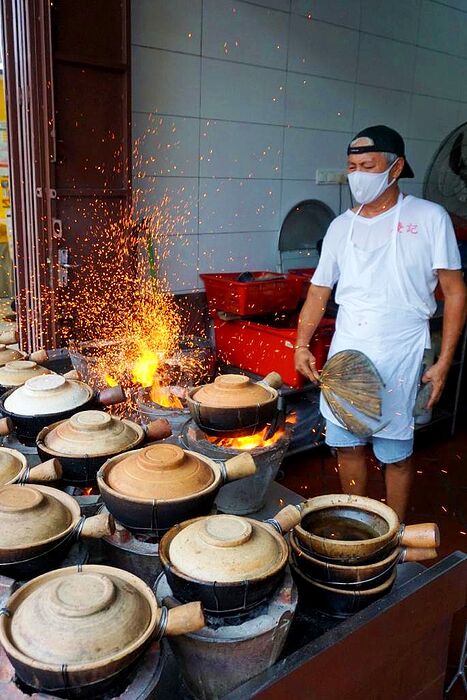 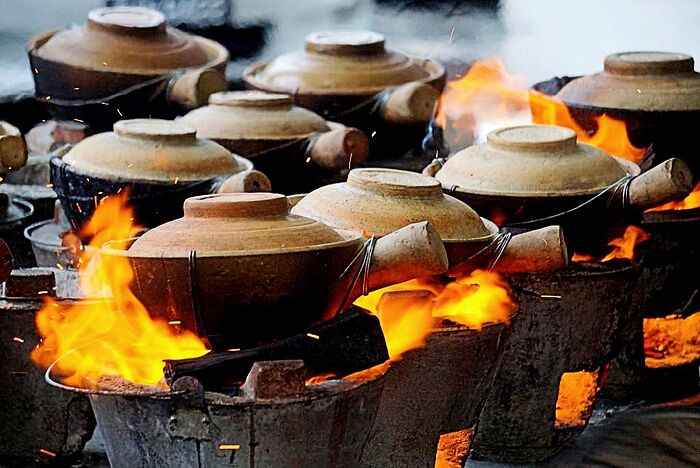 Founded sometime around the 1950s by a Cantonese sojourner, Lai Heng, the eatery started off as a road-side stall on wheels. He later settled in a permanent location at Chan Siew Heng Kopitiam, a traditional Chinese coffeeshop in Kampar Old Town in 1960s, before moving to Wing Loke Yuen Coffee Shop on Jalan Idris (the town’s busy restaurant-lined precinct) , towards the end of the 60s decade. Now, it’s got its own shophouse on Jalan Idris.

Heng Kee’s chicken rice is cooked with salted fish, slivers of Chinese sausages, and small pieces of chopped chicken which had been marinated with minced ginger, oyster sauce and light soy sauce. Dark soy sauce is drizzled onto the rice, which is then topped with an egg & chopped scallions before serving. 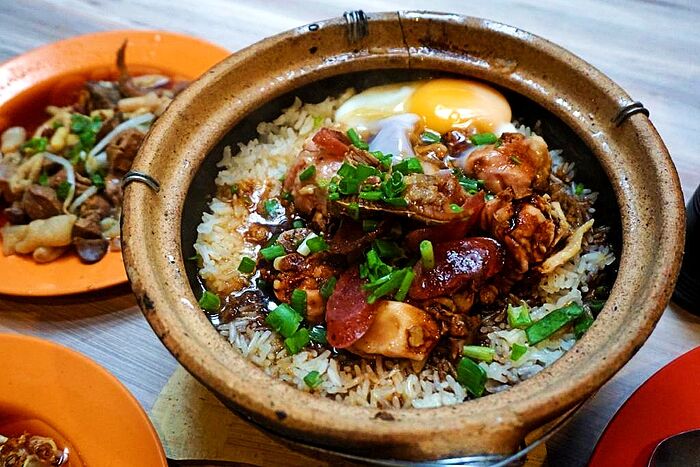 The current owner-chef is 59-year-old Lai Lit Keong @ Ah Keong, who had been helping his father, Lai Heng, since he was a kid. Ah Keong now runs the eatery with clockwork efficiency, as he cooked upwards of 14 claypots at one go, effortlessly monitoring the multiple individual pots of chicken rice he had started cooking upon receiving the orders at various times. 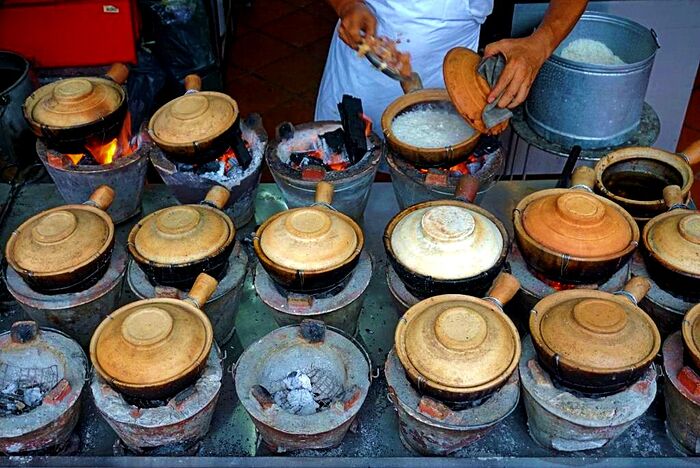 Our dinner last night consisted of:
The famous Claypot chicken rice - greaseless and delicious: the fluffy rice was infused by the saltiness from the fish, the sweetness from the waxed Chinese sausages, and the savory flavours from the marinated chicken pieces. 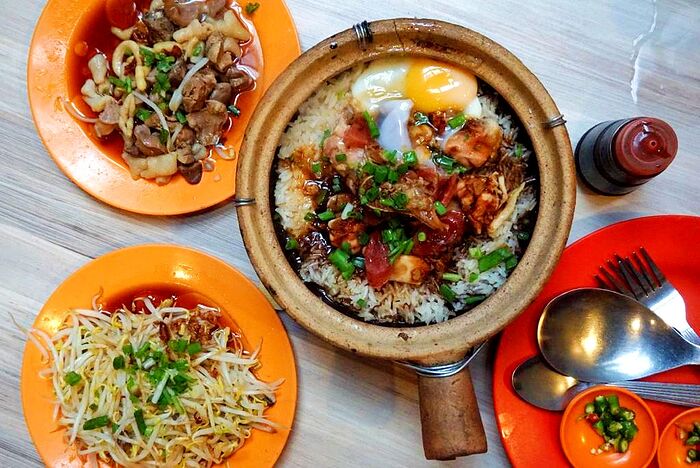 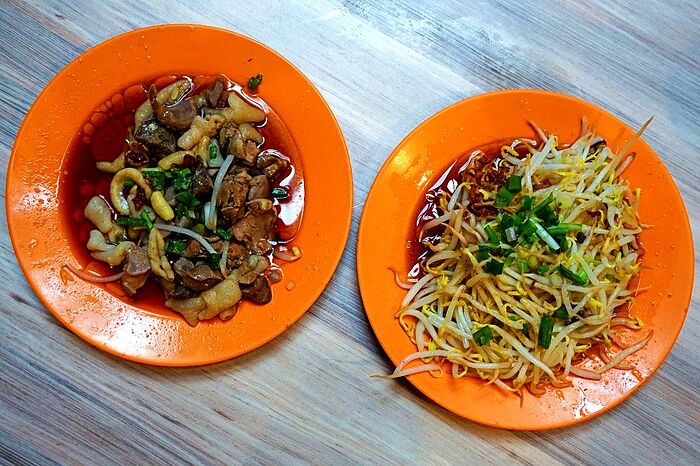 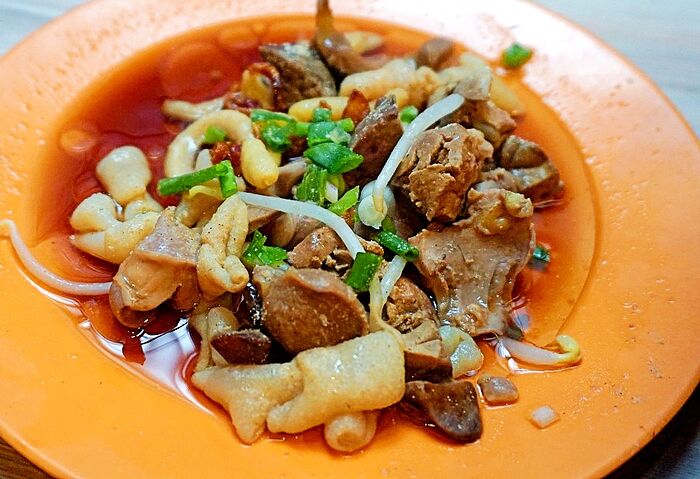 Blanched soy bean sprouts, drizzled with the same dressing as for the chicken livers/gizzards. 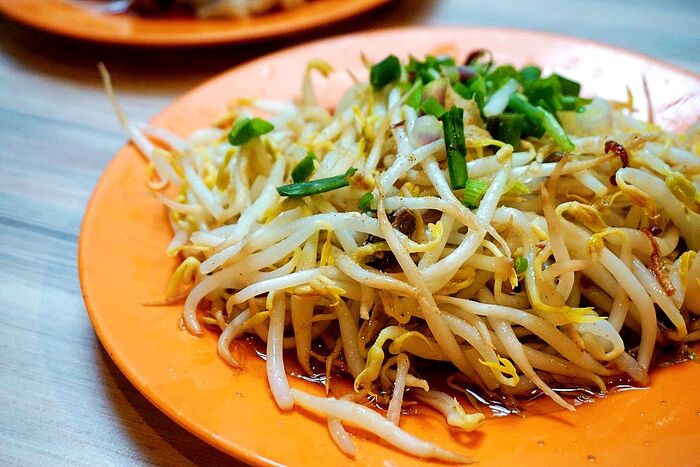 Simple fare, really, but it filled one up pretty quickly.

And one of the best-known eateries in Kampar is Heng Kee , which specializes in chicken rice, cooked in Chinese claypots atop charcoal braziers.

Love it when it was cooked with charcoal. Also not to miss, the scorched rice.

How the cook can deal with 14 pots at different order times without a timer is beyond my comprehension.

Love it when it was cooked with charcoal. Also not to miss, the scorched rice.

Yes, the scorched part was the best bit for me, too!

How the cook can deal with 14 pots at different order times without a timer is beyond my comprehension.

The human brain is pretty amazing - I’m pretty sure it took him years to master his craft, but I surmise he can handle even more, if need be!

Are these clay pots the same as or similar to the ones @Chemicalkinetics shared here?

Here, you can tell most of my donabe and “sand” clayware are not huge. My two regular donabe (on the left) are what people considered as 1 person and 1-2 person. I put a ruler to help put things in perspective. The lower left one has a inner diameter smaller than 6 inches. [image] I forgot to mention that my rice cooker has an inner lid and outer lid. [image] I did buy a couple of larger donabe, but I bought them as gifts.

Are these clay pots the same as or similar to the ones @Chemicalkinetics shared here?

The fourth photo, the closeup one of the clay pot with the lightly poached egg at the top - amazing! It makes me want to go to Malaysia just for one dish!
My current plan is to go hiking at Bukit Batu Suluh in the morning, then hit Heng Kee on the way back to Penang! I wish, anyway. I am still stuck in Maryland for the foreseeable future…

I am still stuck in Maryland for the foreseeable future…

I hope you can come in the foreseeable future.

I’d planned to visit Maryland and spend Christmas with some dear old family friends in Chevy Chase last year, but for this pandemic! I wish we can all travel again soon.