My spouse can’t play pool very well, but he ATE UP that chili.

Believe it or not, it’s time for July COTM nominations (but please carry on cooking from Edward Lee’s books).

Welcome to nominations for our July, 2022 Cookbook of the Month. For those of you new to this post series, here is how it works: Each month we choose a book to cook from as a group. We start by nominating books we’re interested in, and we’ll later choose from the books with the most nominations. You many nominate as many books as you wish. Please nominate with the intention of joining us in cooking from the book and reporting on the dishes you make, should your nominee be selected. In order to …

I remember loving those cherries when S &P was a COTM on CH. Made them several times and then got enamored by some poached cherries in a Suzanne Goin cookbook and forgot about these. I definitely need to revisit.

Welcome to voting for July 2022 COTM. Nominations were all over the place this time, with 24 different books nominated but none getting more than four nominations. Two met that threshold, and we’ll be choosing between them: BLACK FOOD: STORIES, ART, AND RECIPES FROM ACROSS THE AFRICAN DIASPORA, edited by Bryant Terry and FLAVORS OF THE SUN: THE SAHAD’S GUIDE TO UNDERSTANDING, BUYING, AND USING MIDDLE EASTERN INGREDIENTS, by Christine Sahadi Whelan. Below each book link at the end of this post, y… 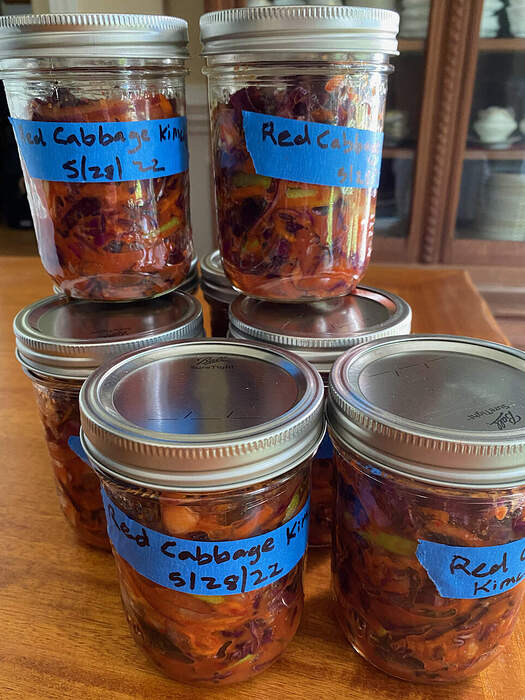 While the spicy Napa kimchi in this book has been a staple in my house for years now, this is my first time with this recipe. A giant red cabbage in my CSA box was the needed prompt. I skipped the bacon, which the author says in the headnote is fine to do. But instead of just omitting it, I compensated by using smoked salt for part of the salt in the recipe. All of Mr. Lee’s kimchi recipes follow a similar pattern. There is a paste made of sweet rice flour, water, and sugar. The “guts” include all the non-cabbage ingredients. In this case, red onions, grated carrot, green apples, chile flakes, fish sauce, garlic cloves, ginger. Bacon, if used, is added at the end. For the fish sauce, I used a homemade vegan fish sauce. I noticed the amount of chile flakes called for in this recipe is significantly less than in the Napa kimchi. I used two different brands, one of which is mild, and the other hot, and blended them to get what I felt would be a nice amount of kick for the kimchi. Mr. Lee calls for keeping his kimchis at room temp for 24 hours, then refrigerating. I don’t do that. I like a more fermented flavor, so I leave them at room temp for 4 or 5 days, then let them cure in the fridge for another week or two before digging in. He suggests that the kimchi will keep in the fridge for 2 weeks. I suggest that it will keep indefinitely. I have let the Napa kimchi age for a year or more in the fridge. It only gets better.

So my kimchi was three weeks old as of last night, and it was time to crack a jar open. Mr. Lee suggests serving with bratwurst, so I cooked up some Beyond brats, and served on a mound of kimchi. The kimchi was excellent, mild enough that you can eat a pile of it, but still with some kick. The apple was a welcome sweet/sour note. 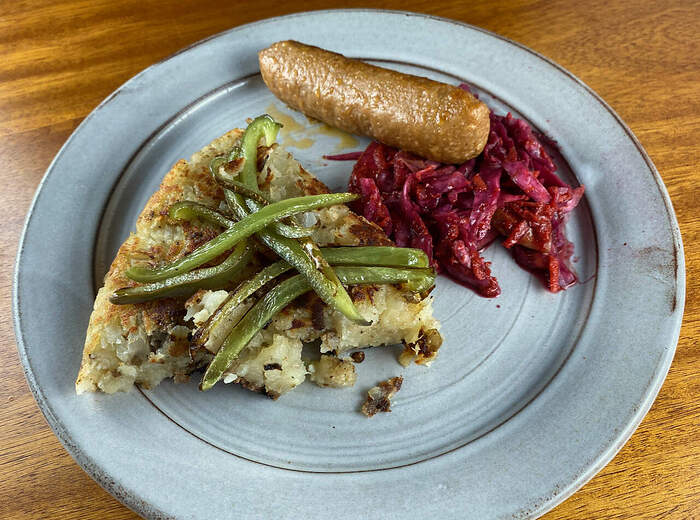 Oooh, this sounds so good. I might make it for my meatloaf/coke/bourbon loving, southern raised husband for his birthday.

You should. Make it all together. It’s like putting some south in your mouth. lol

In July, we’ll be cooking from FLAVORS OF THE SUN: THE SAHADI’S GUIDE TO UNDERSTANDING, BUYING, AND USING MIDDLE EASTERN INGREDIENTS. and its variety of recipes. Please use this space to discuss the book, and on July 1, a reporting thread will go up for sharing our detailed experiences with the recipes. For those members of public libraries that offer use of its app, the ebook edition of Flavors of the Sun is available on demand via Hoopla. To see how we got here, check out the nominations …

Join us for the August 2022 COTM nominations here:

Hey HOs, I know folks are just getting going on our current COTM, but yes, it really is time to start the selection process for August. So let’s start throwing out our nominations for a book to cook from for the so-called dog days. To nominate a book, please make a comment with the title in ALL CAPS. Titles not in ALL CAPS will not be counted. You may nominate as many books as you wish, but we hope you will do so with the intention of cooking along if your nominee becomes our August selection. …

Join us for the September, 2022 nomination process:

Hello everyone, hope you are all having a fun and delicious August. While there is a lot of August still ahead of us, it is time to start thinking about September in the COTM universe. So let’s get rolling with some nominations for our September Cookbook of the Month. To nominate a book, put the title in ALL CAPS in the comments below. Titles not in all caps will not be counted as a nomination. You may nominate as many books as you wish. We do ask that you make your nominations with the intent o…