July-August 2022 COTM: FLAVORS OF THE SUN

EVERYDAY SWISS CHARD, pg. 52
Somehow this was more than the sum of its parts. I think my ingredients were especially good (young, vibrant chard, great garlic, good feta), and then finishing it all with a dusting of sumac brought it all together. I added pines nuts and ate this wrapped in a fresh flour tortilla.
Summary: Sauté chard with lots of garlic and some Aleppo pepper. Top with feta and sumac.
I would make this again. It would be a very good filling for a savory pastry.

DATE PECAN COCONUT GRANOLA (p. 286)
Even though I have a couple of good granola recipes, I can never resist a new one. The saving grace of this one is the date syrup, something I have not tried before and which results in a nice caramelized flavor. I also like the use of chia seeds, as using smaller nuts or seeds in concert with oats and large nuts like pecans makes for a nice texture. I probably used closer to a cup of pecans, but otherwise followed the recipe, which also contained coconut milk and flakes, cinnamon, and vanilla. I have not added the dates yet because I thought I might have it with the berry-melon salad, but I went with a white peach instead. 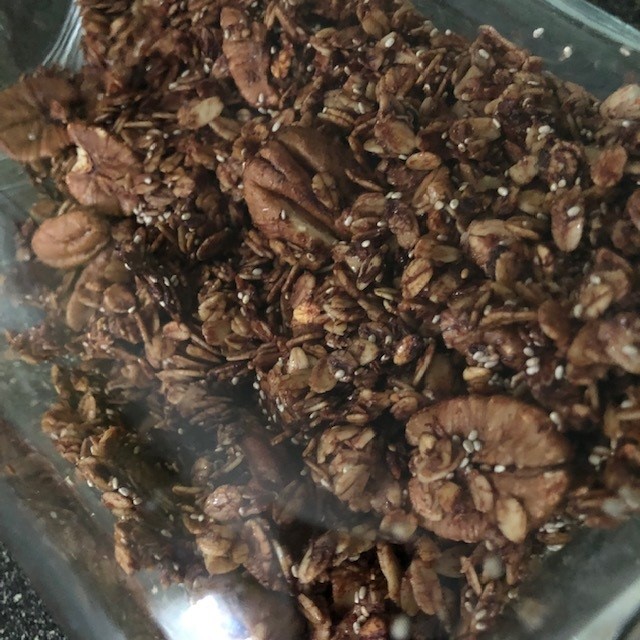 BLUEBERRY MELON SALSA (p. 142)
I’m a bit of a purist with fruit, but I had some blueberries that were a tad tart and a perfect canary melon. My mint plant was looking sad, so I did not use a full cup of mint for the syrup but it was still nice. The syrup and lime made this better than its components. 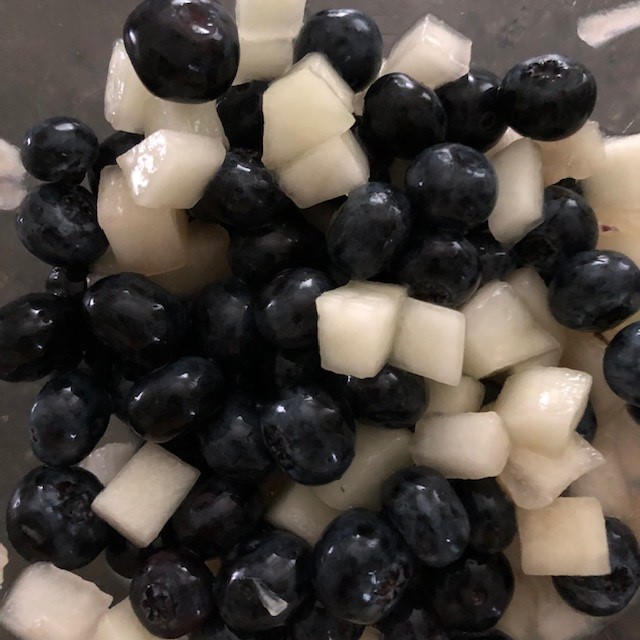 I deviated a bit here. The idea is in the “Ten More Ways to Use Berbere” spread, and the instruction is simply to mix a couple teaspoons of berbere seasoning into your vinaigrette of choice, and use to dress a salad of black or kidney beans, scallions, peppers, celery, and parsley. I used butterbeans instead of the given options, and subbed diced sweet onion for the scallions. I also added a ton of sungold and grape tomatoes, because between my CSA and my garden, I have them coming out my ears. I can’t have a tomato-less meal at this point (I’m not complaining). Then there is the berbere. Unlike the harissa, the author gives a recipe for berbere spice mix, on p. 160 as part of the recipe for fiery berbere shrimp. That recipe makes a ton, so my first though was to halve or even quarter it. But then I recalled the popular berbere mix from Bryant Terry’s Vegetable Kingdom (those of you on Chowhound for Bryant Terry month as COTM might remember it), so I took a look at that. Then I also thought about the harissa blend I made from Mourad, so I looked there too. I ended up making a hybrid of the Terry and Mourad recipes. The Mourad recipe calls for ajwain, which I feel is essential, so I added it to the Terry recipe, and also added some citric acid which Mourad uses. I also included some Aleppo pepper in the chile mix, per Mourad. Otherwise followed Terry. Adding the citric acid to the spice mix is a game changer, because instead of having to mix the spices into a dressing with lemon juice or vinegar, you can just toss the spices and olive oil with the salad ingredients, and you’ve already got the tang there. It’s also ideal for roasting, because you don’t have to add moisture. I used the same berber mix on the roast potatoes I served alongside the salad. I also minced some preserved lemon to go in the salad, so there was some additional tang and complexity from that, although it wasn’t really needed. 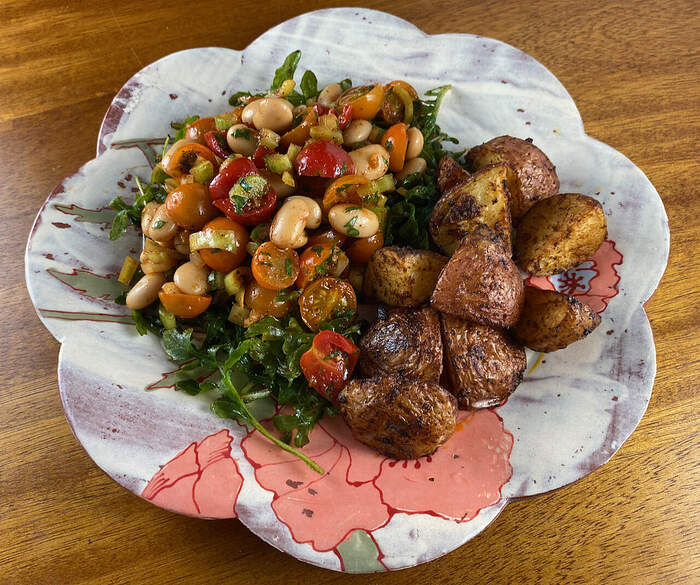 When is your Vegan Cookbook coming out?!?

I also still make Bryant Terry’s berbere blend from Vegetable Kingdom, and just yesterday I made his Green Rice. It is fantastic. I intended to make the Turmeric-Pickled Cauliflower from Flavors of the Sun yesterday, but I decided to roast my head of cauliflower instead because it’s a great accompaniment to the green rice.
Here’s an outline of that rice for anyone who wants to try it:
Make “cashew cream” by soaking some raw cashews and blending them with a little water the next day until smooth.
Soak 1 cup of rice for a while or overnight. Drain well.
Blend up 1 c kale, 1 c spinach, 2 T of the cashew cream, 1 1/2 c liquid, 1 t salt, and 1/2 cup green pepper (I often use poblanos or Anaheims, sometimes roasted first).
Toast the drained rice in some oil. Add some minced garlic and sauté until fragrant. Add the green blend. Bring the rice to a boil and then reduce to low. Cover and cook for 12-15 minutes, then remove from heat. Allow to sit with lid on for some time before fluffing.
The cashew cream added wonderful body and richness to this rice. It’s a regular at our house; it goes with some many things.
I won’t be able to cook from Flavors of the Sun again until near the end of the month, but for now the Everyday Swiss Chard is closest to a “forever” recipe. I’ve enjoyed the leftovers for several days.

I just got the book, maestra. And I have a cocktail party I’m hosting this weekend. Do you think this will be good made as a batch? Will people love this?

A little humor from the store itself - I stopped by couple of days ago: 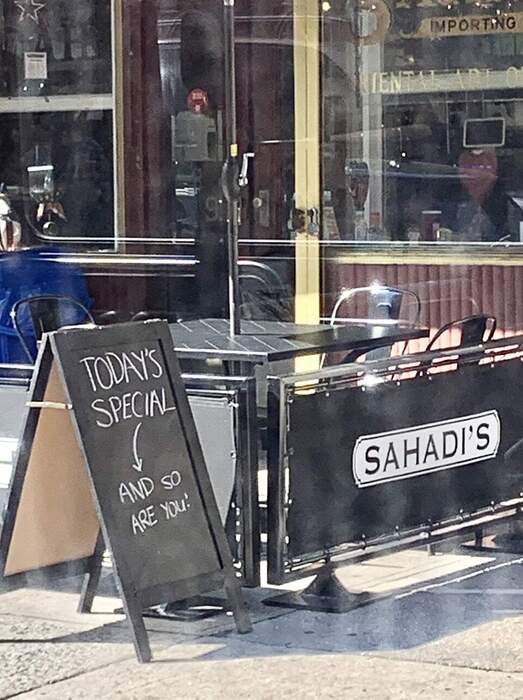 I picked up some delicious prepared jumbo lima beans from their deli, and went looking for a similar recipe in the book but sadly no luck. 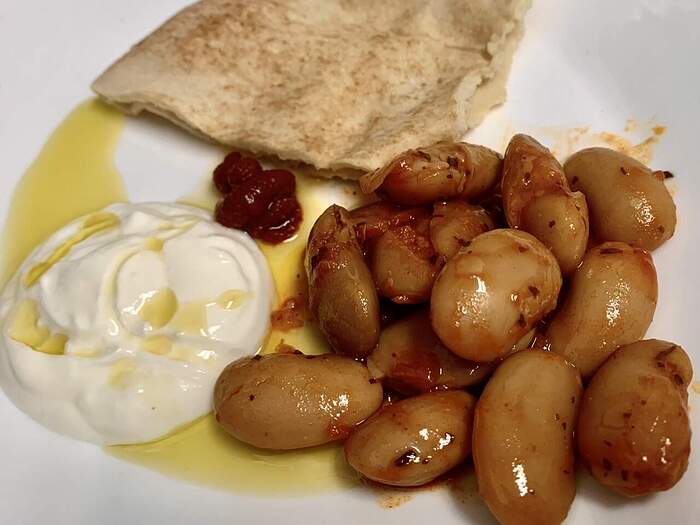 Also picked up rose and orange blossom water for another HO, and a few other bits and bobs, but it was mostly picking up things and then putting them back because I have something similar in stock already. Temptation island!

Those beans are beautiful! I would love to just knock around in the store looking at whatever. Would probably buy a lot of stuff I don’t need.

Folks, it’s time to start nominating for September. The thread is here:

Hello everyone, hope you are all having a fun and delicious August. While there is a lot of August still ahead of us, it is time to start thinking about September in the COTM universe. So let’s get rolling with some nominations for our September Cookbook of the Month. To nominate a book, put the title in ALL CAPS in the comments below. Titles not in all caps will not be counted as a nomination. You may nominate as many books as you wish. We do ask that you make your nominations with the intent o…