It's about time we foodies got our own horror movie

" ‘The Menu’ is black, broad and sometimes clumsy, attacking its issues more often with cleaver than paring knife. Yet everyone is having such a good time, it’s impossible not to join them. The movie’s eye might be on haute cuisine, but its heart is pure fish and chips.

The answer is always more sauce. 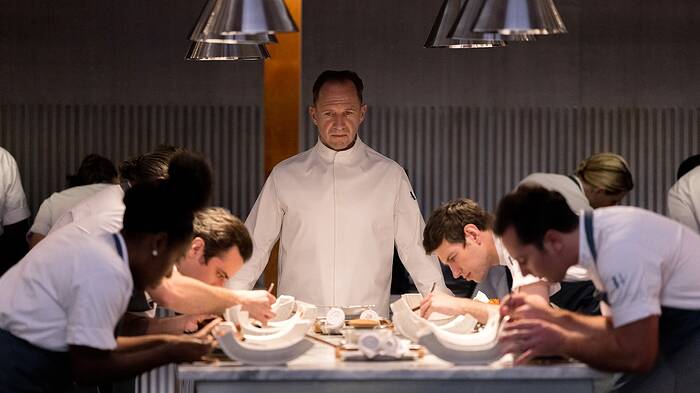 The Michelin-Starred Chefs Who Made 'The Menu'

Three world-class chefs were brought in to create an authentic environment for actors and audiences alike.

I’m seeing this in about 3 hours. Full review to follow.

I don’t see this as a horror movie, but don’t forget the oldie “Who is killing the Great Chefs of Europe”

My partner and I saw The Menu Thanksgiving Day, as the sole occupants of the theater.

@Bob_Hutcheson is correct that The Menu isn’t really a horror movie. Rather, it’s a VERY darkly comic social satire with a few horror elements thrown in. It’s not scary, but there are a few violent scenes and a modest amount of blood, if those sorts of things are concerning to you.

If you’ve watched the trailer, you know the basic premise. We are at a VERY exclusive restaurant, Hawthorne, located on an island off the coast of… somewhere. The patrons (only 12) have taken a chartered boat to the island, and there is no way back without it. Hawthorne is presided over by Chef Slowik (Ralph Fiennes), and is a very ‘conceptual’ place, ala’ Vespertine, in L.A. In one early scene, Chef Slowik gives a monologue about how bread has, for centuries, been the food of the common people, but since his guests are all the wealthy elite, they are not common, so they get “No Bread”, a plate describing the bread they WOULD have gotten (an “artisanal whole grain loaf” etc) and unaccompanied accompaniments that WOULD have gone on the bread. As each dish is presented, we are shown a “Chef’s Table”-like shot of the food, with oh-so-artfully written descriptions, which become more and more amusing as the ‘courses’ get less and less edible.

Each course of the meal gets stranger and more sinister, as guests’ secrets are spilled and things turn inhospitable.

On the one hand, the film is having a grand time poking fun at extreme foodie culture, and a way of thinking and talking about food that lots of us here will recognize in themselves, even if we then quickly murmur “Well, sure, but I’m not THAT bad…” On the other, Chef’s Slowik’s staff display an… UNUSUAL devotion to their mad genius boss. The film never REALLY delves into what might make a crew of 30+ highly skilled professionals show such loyalty in the face of complete insanity, and I would have liked to see this explored a little more.

The performances are great. Anya Taylor Joy has a magnetic screen presence. Fiennes is 100% believable as an embittered artist, so full of self loathing that he resorts to murder. And the movie is gorgeously photographed.

If you like your satire with a soupcon of “Fuck the Rich” and a non trivial amount of violence, you’ll have a grand time. I certainly did.