Is it possible to make cake batter the day before?

I’m just wandering if it’s possible to make cake batter the night before and bake the following day? I’ve never done this before and would like to know if there is any precaution. I’ll be using instant yeast. The bananas are defrost but no time to bake tonight. Thanks in advance.

I have (and my mother much more often) made even baking-powder-leavened pancake and/or waffle batter the night before, but I’ve never tried it with cake batter. If it were chemically leavened, I might hesitate to do it, since “rising” is usually bigger issue for “cakes” (or quick breads) than for basically flat things like pancakes and waffles. But since it’s yeast-raised, I wouldn’t think it should be a problem. In theory it might be a good idea to use a little less yeast than if you were baking it soon after making the batter (since the yeast will have longer to reproduce), but at refrigerator temperature, I doubt it would make a big difference

I’ve tried with yeast bread batter, indeed without problem. Same with pancake batter, can be kept for a few days.

Ok, it’s really late now, so i’ll rather toss the fruits in the fridge, but I would still like to know if it works. As this can be useful to save time for future dinner parties or well, breakfast.

I frequently bake up the layers, cool and wrap in Saran for up to several days. Frost or compose dessert on party day. Never any difference in quality.

We have a friend who comes for coffee several times a month…at 6:45 in the morning. I measure out wet and dry ingredients the night before, then whoop then together in seconds in the am and bake muffins and coffeecake.

We have a friend who comes for coffee several times a month…at 6:45 in the morning. I measure out wet and dry ingredients the night before, then whoop then together in seconds in the am and bake muffins and coffeecake.

That sounds good. It’s the preparation that is long actually.

We have a friend who comes for coffee several times a month…at 6:45 in the morning

And you bake fresh muffins and coffee cake for this friend at that time? You are a good friend!

I’m reading this with interest because I have never baked a cake with yeast.

ETA: never baked a sweet yeasted cake… I realized I’ve made plenty of savory baked and steamed indian “cakes” with a fermented batter (idli, dhokla, handvo), no additional yeast added, though it would certainly speed up those recipes.

I have made the batter for yeast waffles the night before.

German kuchen is made the night before, as its heated and the very slow rise in the fridge overnight makes the texture.

I agree that anything leavened with levure chimique would be a gloppy wet mess after a night of rest.

I will do a test. The same batter will be divided into 3 batches. One will be baked today, 2 batches tomorrow with one adding all ingredient, and the third batch will be without yeast and egg, which will be added before baking. Will report back.

The recipe used will be Mrs Harter’s banana bread:

225g plain flour 3 teaspoon baking powder 1 teaspoon salt 0.25 teaspoon ground nutmeg 100g butter 150g soft light brown sugar 2 eggs 3 bananas (defrosted if you froze them) 50g chopped walnuts You need a 1kg loaf tin and the over pre-heated to 180. Sift together the flour, baking powder, salt and nutmeg. Separately beat together the butter & sugar. Lightly beat the eggs and mix slowly into the butter/sugar mix. Mash the bananas and add to the mix. Gradualyl stir the flour mix into t…

I’m reading this with interest because I have never baked a cake with yeast.

One can use yeast (fresh, instant and active dry) or egg white to raise a cake.

Egg white batter might be fine to wait half an hour maximum, I don’t think any longer.

Good heavens. That supposed to say *because its yeasted".

I swear the gremlin that lives in my phone is out to make me look drunk and illiterate.

I was pretty impressed! I was thinking it was some fancy terminology.

Test result, using the same mould, same temperature and same weight of dough. The recipe was mentioned up thread, 1.5 times the ingredients.

On the left the cake baked the day before with the batter made within half an hour before baking. Right was a batter refridgerated for 15 hours, left out 30 minutes in room temperature before baking. As you can see, the right raised slightly fuller on the top compared to the left, nearly identical. One more noticeable difference was rather the texture, the cake on the right was much more flimsy, as you can see, the cut wasn’t clean. Note that I was comparing to the cut I’ve made for the left one the day before, not the same moment, as it was slightly dried out and less moist than the recent baked one. 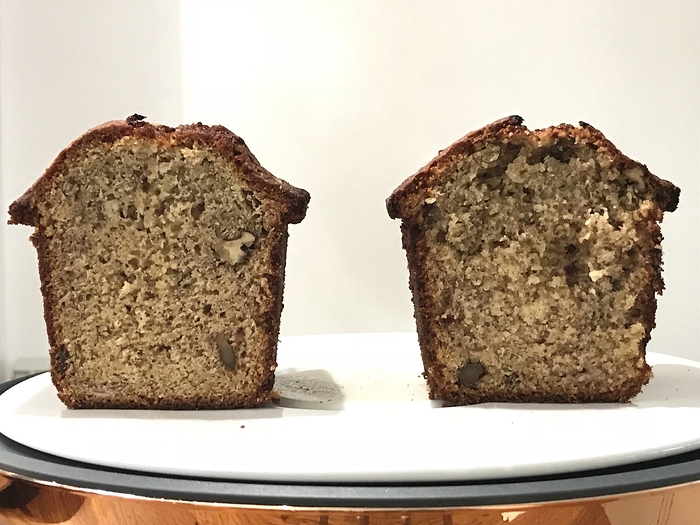 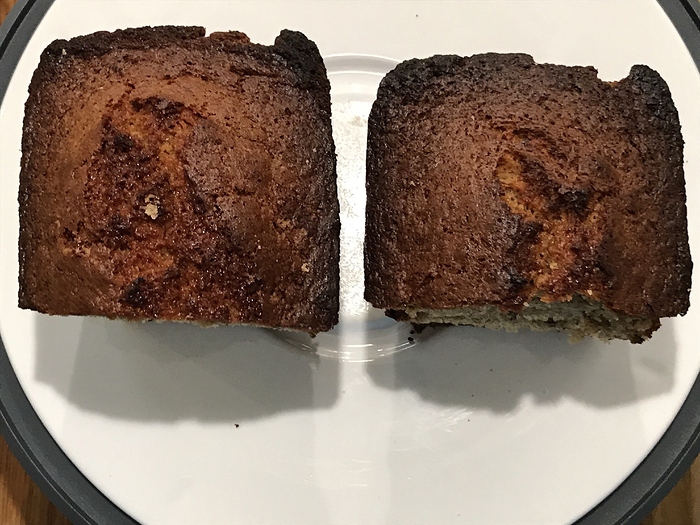 One element might affect the result, the batter of the right one, was colder than the left one when put into the oven. In conclusion, I still think the right one was desirable if time is an element one has to considered.

the batter of the right one, was colder than the left one when put into the oven

In effect, the right batter was baked “less” than the left because it started colder, so perhaps the left one would be the same moistness if baked a few minutes less?

the right raised slightly fuller on the top

“Doming”, I recently learned, is because the sides of a cake / bread cook faster than the middle, so the middle continues to rise after the perimeter is cooked - so if batter was colder that also makes sense.

(I learned about doming because I’m trying to avoid it when i bake in my small toaster oven - the nicely puffed/domed middle is too close to the heating element and gets charred. For the first time this weekend, I tried one of the suggested insulation tricks around the pan to prevent it, and it worked!)

I think the batter would probably need at least more than an hour or even 2 to completely reach the room temperature. The aim was to test if there would be problem with the instant yeast, at least I would say the yeast performed the same.

How was the flavor? For regular yeasted bread, they always say that an overnight rest in the fridge helps flavor, though I don’t know that I could ever detect that…

I can’t detect with fresh yeast either in over proof pizza dough, but it does have a flavour compared to instant yeast. I think it’s more obvious in the case of sourdough with levain.

So, @naf, you replaced the baking powder in the original recipe with instant yeast? I’ve done this before as my little one is very sensitive to the taste of chemical leavening. I found it changed the flavor of banana bread, too (not worse, just different). Yeasted recipes usually are fine in the fridge overnight, except I can never get fried dough to ever be quite as light after refrigeration.

However, had you gone with baking powder, it still would have worked. I’ve done this many times. It doesn’t work as well with baking soda as with baking powder. I’ve done it not only with quick breads, but also with cake batters. (Side note: I consider the recipe posted above a cake because it was creamed.) Madeleine are commonly made this way to get that characteristic hump, a side effect of doming with cold batter and high heat. In my experience, it doesn’t work as well for large form factors as it does for muffins/cupcakes, mini loaves, etc. In fact, for mini loaf cakes, I prefer this method because it give nice domes, just like madeleine humps.