Leech Street (Jalan Bandar Timah) in Ipoh’s Old Town is famous for its traditional Chinese coffeeshops, all serving the famous Ipoh “pak ka fei” or white coffee. Brewed from freshly-roasted and ground caramelized coffee beans (Ipoh’s ground coffee powder consisted of 50% coffee, 45% sugar, plus 5% margarine or butter, roasted together). When brewed, Ipohians normally liked their coffee with a bit of sweetened condensed milk, or else evaporated milk, hence the “pak ka fei” or white coffee moniker. The aromatic, full-bodied Ipoh “pak ka fei” is probably the best cup of coffee one can find anywhere in the world! 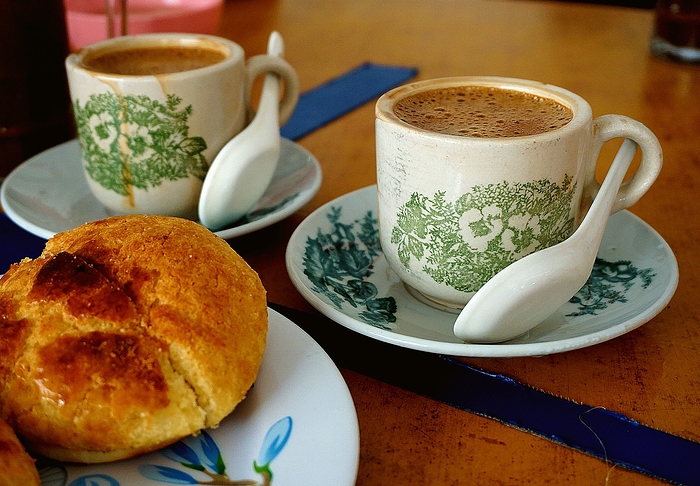 The version here at Ah Chow Coffeeshop is my favourite - mainly because it has a version where a shot of Chinese Shaoxing wine was added to the coffee, a kinda picker-upper. 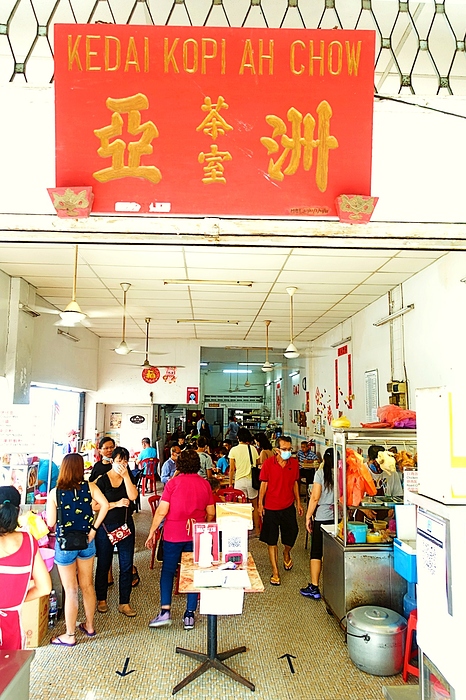 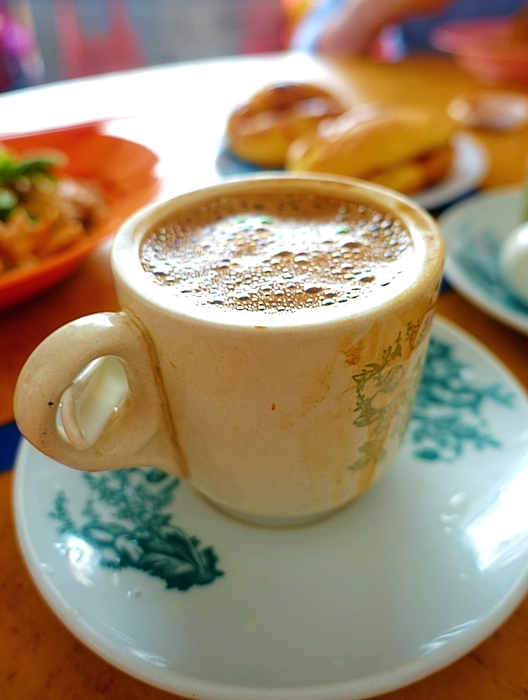 The food stalls at Ah Chow are vastly under-rated by Ipohians, although each stall does have its own regular clientele.

We tried the Ipoh-style curry mee here and the rendition here was A-M-A-Z-I-N-G! The combination of yellow wheat noodles and fine white rice noodles was covered in a thick Hainanese-style curry, pale-coloured but deliciously piquant. Another sauce - a combination of dark & light soy sauces plus lard - was added to give yet another taste dimension to the overall dish. Garnished with Cantonese-style BBQ pork (“char siu”), poached shrimps, and fresh mint leaves, this was the best plate of noodles I’d had all year! I’d come back to Ipoh just for this! 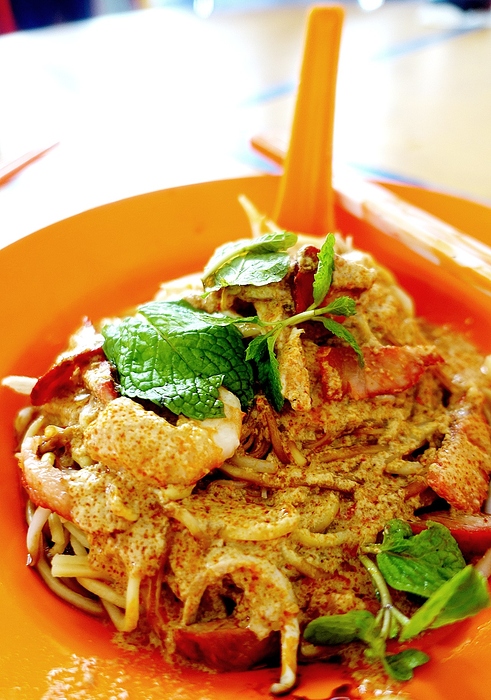 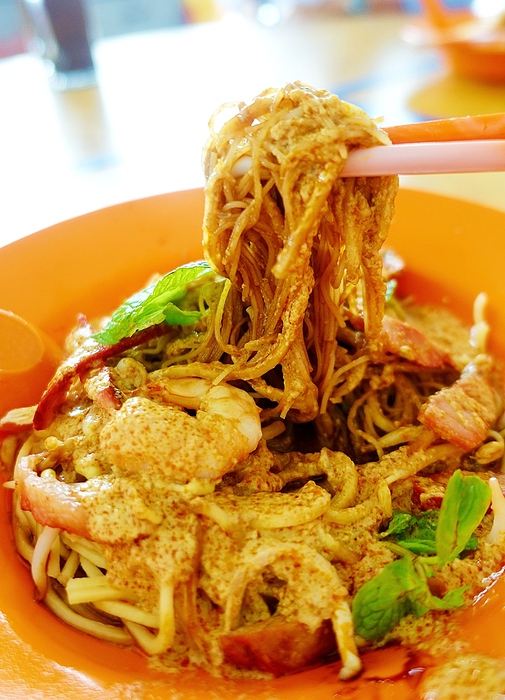 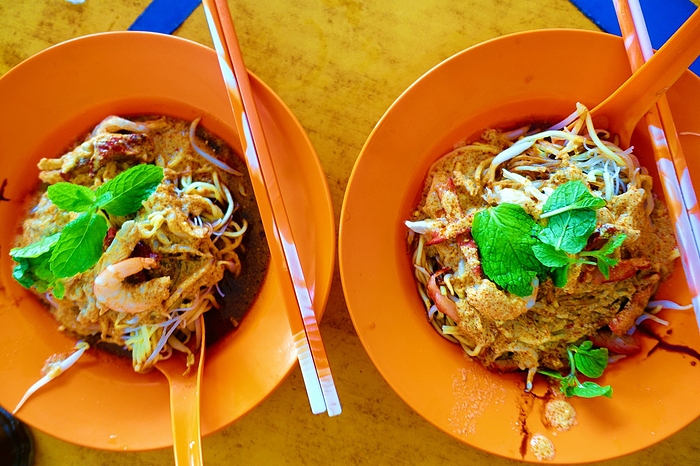 Another noodle dish we ordered from the other stall fronting the coffeeshop is the Ipoh-style wantan mee. Unlike in Hong Kong, where wantan noodles are usually served in a delicate, flavorsome soup which takes hours to concoct, wantan noodles in South-east Asia are usually served with a soy sauce-based dressing. The version here in Ipoh is similar to that in KL, Penang or even Bangkok, where the blanched noodles are tossed with dark and light soy sauces, sesame oil, perhaps a bit of oyster sauce (the combination and content of the sauce dressing is usually a trade secret), dripping from the sweet “char siu” roast, etc.
The version here at Ah Chow is garnished with some very fatty, caramelized “char siu”, crisp-fried lardons, and finely-chopped scallions. A tiny accompanying bowl of clear soup with 4 wantans is served on the side.

I liked how “traditional” the Ipohians are, as they still serve their wantan noodles with pickled green chilis - something which Penangites used to do, until the invasion of ultra-spicy red chili paste dressing, in the recent couple of decades. 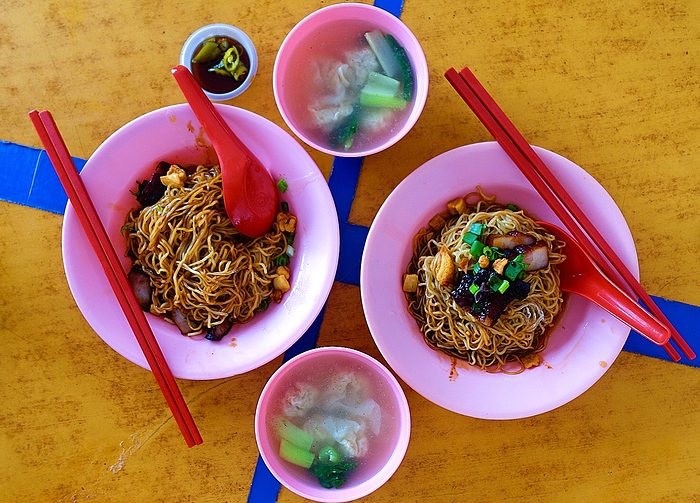 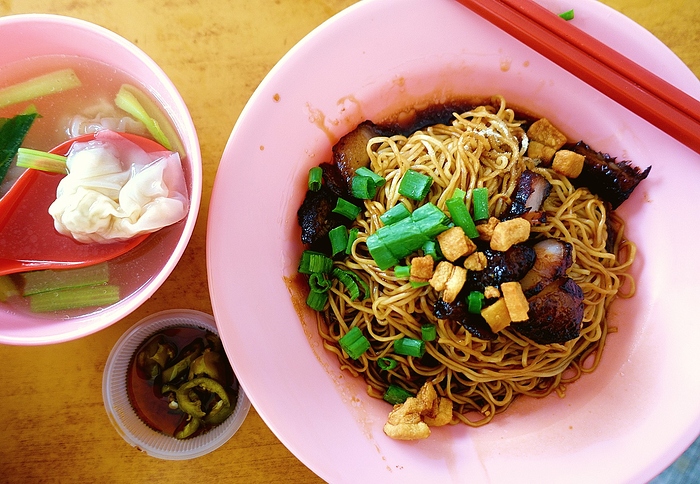 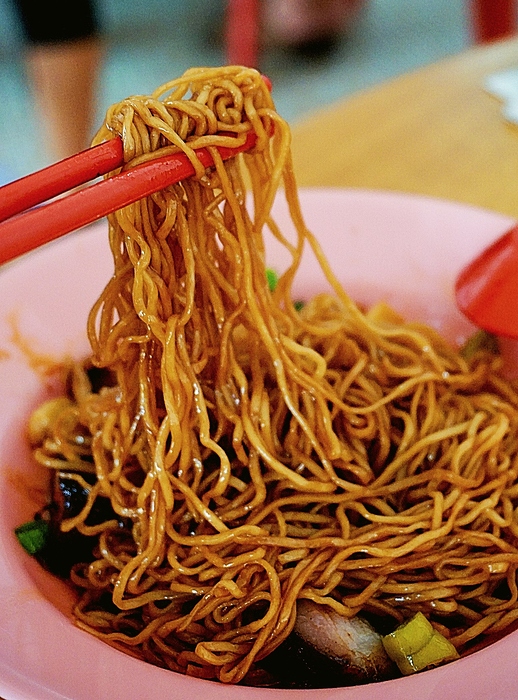 Whilst snaring a table at Ah Chow is never easy, it’s still more “civilized” compared to the crazy crowds that one encounters at the more famous (and much older) mainstays down the same street: Nam Heong (founded 1958) and Sin Yoon Loong (Est. 1937). Most customers at these more well-established places are outstations visitors from Kuala Lumpur, Penang, or other smaller towns in Perak or Kedah. 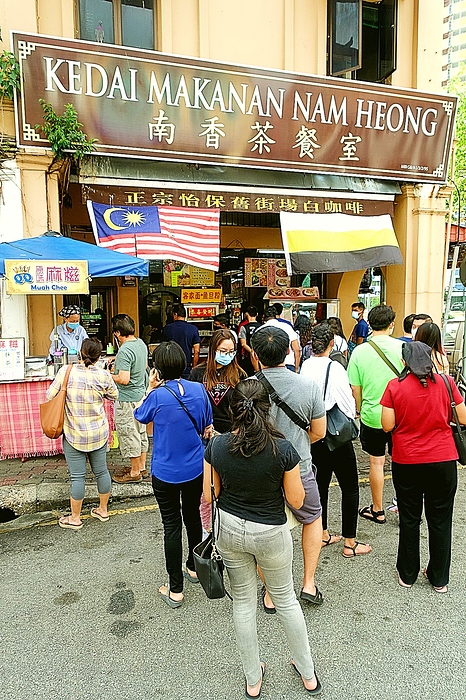 Sun Yuan Foong (fore-front) is another traditional coffeeshop, situated side-by-side with its more illustrious next-door neighbor, Sin Yoon Loong (background).
Sun Yuan Foong claimed to be the first place to serve Ipoh “pak ka fei”, although Sin Yoon Loong next door would hotly dispute that. The owners for the two places purportedly came from the same family, though.
Nam Heong seemed to be the #1 spot these days. 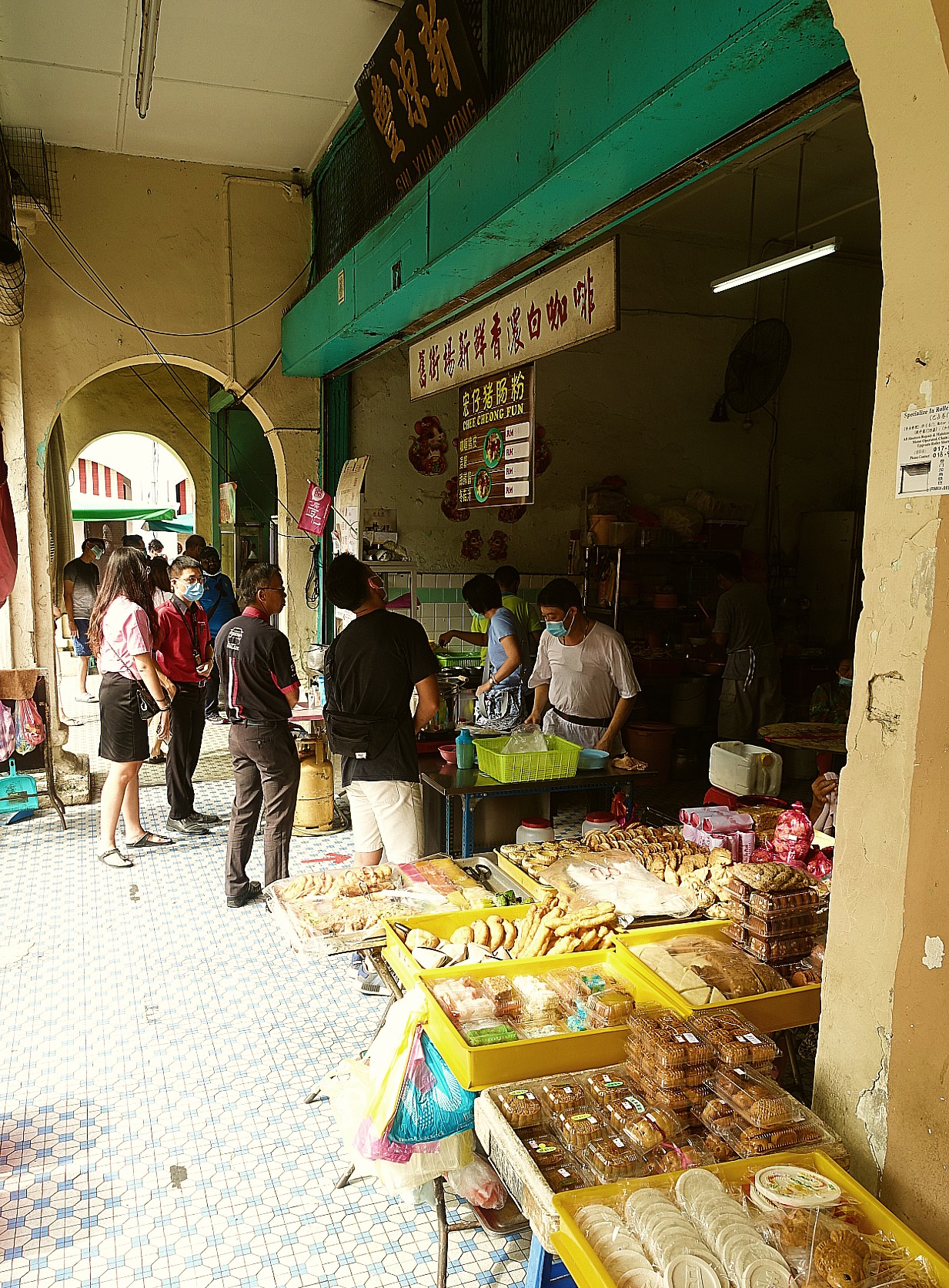 Glad you had your (Ipoh) curry noodle fix.
Is it possible to get coffee without sugar?

What’s the flag alongside the Malay one under the shop sign? Ipoh state flag? But I don’t see a coat of arms so maybe it’s something else.

Is it possible to get coffee without sugar?

Yes, you can ask for coffee without sugar. The coffee brewed from the caramelized coffee beans will have a very faint hint of sweetness, due to their roasting process.

What’s the flag alongside the Malay one under the shop sign? Ipoh state flag? But I don’t see a coat of arms so maybe it’s something else.

Yes, that’s the flag of Perak state, of which Ipoh is the state capital.