If the promotion in the Boston area is ubiquitous, availability ends September 1, but that MIGHT be just for the $7 Taste Test Bundle, which is an Impossible Whopper plus a regular Whopper. I ordered online for free home delivery via DoorDash, which was also part of the promo. Cheese was not an option but that’s wise, because it might affect flavor perception.

I have to say, WOWZA! Though I eschew most fast food, I admit to being a Whopper fan. Not only would I not have known that the patty isn’t beef, when I took a bite of the “real” one after polishing off the impossible burger, the beef was not as tasty as the impostor. I predict that all fast food and casual dining restaurants will be featuring these meatless patties as soon as manufacturing capacity scales up. I hope that when all the statistics are in, impossible meat seriously mitigates greenhouse gases, animal welfare, and diet-related illnesses.

I was eager to try the impossible burger and from GG’s post they are indeed surprisingly good to meat eaters. But, the fact that Burger King will be cooking them on the same grills as their burgers is a total turn off for me as a vegetarian. I read that BK will cook the impossible burger separately in an oven…that doesn’t sound v good to me. I also read that they decided to not use organic soybeans??? Glyphosate in a veggie burger is just wrong. Maybe most consumers aren’t that bothered by this, I know I’m overly picky. Mild orthorexia probably:)

The cross-contamination on the universal grill is simply stupid! Buy a frying pan, Mr. BK, or some kind of sheet pan. Keeping meat from no-meat is not rocket science.

So long story short but at the request of my daughter I tried the impossible burger today. It’s been at least 5 years, if not more since my last whopper so I might not be the best judge but…holy cow was that good!! Not good like better than a whopper but good in if you didn’t tell me I would never have guessed it on my own. Really a great meat replica without any veggie burger similarity’s at all. 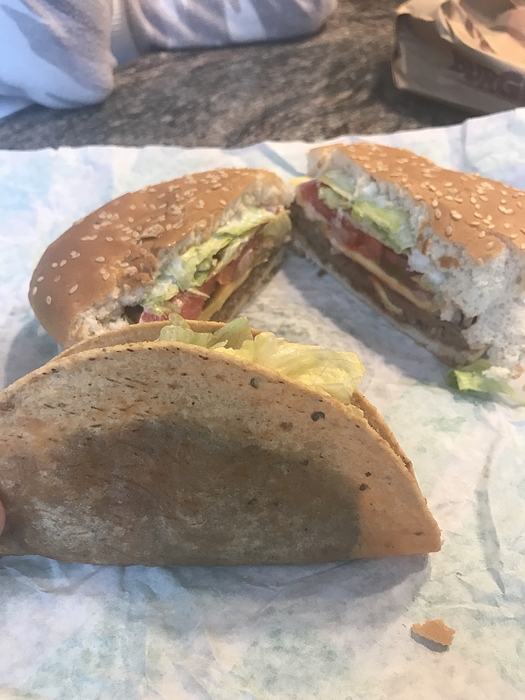 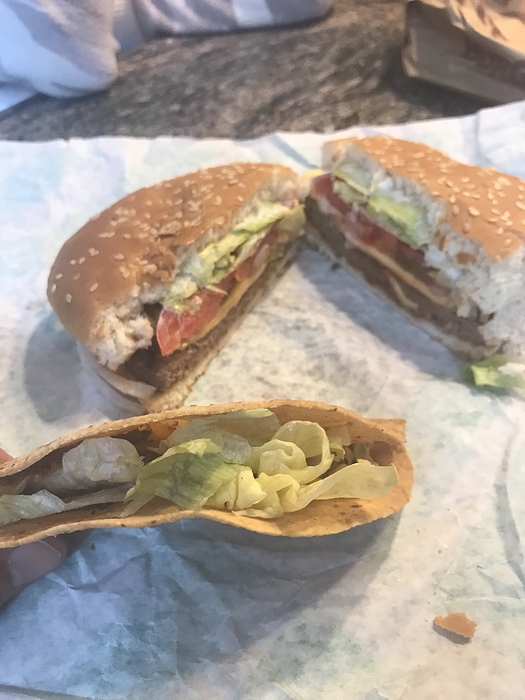 Given that the salt content of the Impossible Burger is well over 50% more than a Whopper, for those who have tried it can you taste the salt or does it just quietly take years off your life?

I’ve had an Impossible Burger (at Saxon and Parole in Manhattan, not at Burger King), and it did not taste over-salted to me. Since I stopped eating beef in 1981, I can’t really offer much insight into how much like beef it was. But I vehemently dislike very salty food, so I definitely would have noticed if the salt level seemed high.

I didn’t notice any difference between the Impossible Burger and a regular Whopper at all. I’m not a big salt fan so if it were overly salty I think I would have picked up on it. The only thing I noticed was the lettuce, tomato and mayo were very generous on the burger as you can kind of see in the pic. I enjoyed the extra “freshness” of the lettuce and tomato, perhaps a little less mayo. Overall I really was impressed with it, though not enough that I will become a regular consumer.

Thanks to small_h and Junior for their feedback. So the answer is the high sodium content will just kill you without tasting oversalted. sigh

the high sodium content will just kill you without tasting oversalted. sigh

An Impossible Burger patty has 380 mg sodium. A Whopper patty has 230. Since the RDA for adults is 1500-2300 mg/day, that extra 150 mg seems like nothing. Curious as to why you keep harping on it. If you’re so concerned, just take the pickle off your sandwich.

An Impossible Burger patty has 380 mg sodium. A Whopper patty has 230. Since the RDA for adults is 1500-2300 mg/day, that extra 150 mg seems like nothing. Curious as to why you keep harping on it. If you’re so concerned, just take the pickle off your sandwich.

American adults average about 3400 mg sodium per day, way more than the USDA RDA. Every extra bit is that much more that we don’t need.

Still not a good reason to single out this one particular food. You could also just avoid cheese! Cheese is pretty damn salty.

The point is that much food sold as “healthy” or “natural” is not good for you.

As I pointed on on another thread - in response to you! - it’s the planet’s health some people are concerned with. Including these people, the ones you seem most intent on dragging. Who don’t, as far as I can determine, claim that the Impossible Burger is more healthful for the human body, or more natural, than beef. So I’m not sure which foods you’re tarring with this brush of hypocrisy - being sold as “healthy” or “natural” when they are not.

I was originally going to ask you (both) to lay off on the back and forth regarding the health “benefits” of the product, you’ve each made your point(s).

I was of the school of thought that there were being billed as “healthier” alternative to actual red meat, probably because most vegan arguments are the health benefits of that lifestyle.

I did click the link and reviewed their website and I do not see them mention anything about health benefits or healthier options vs red meat, so I stand corrected. As you point out it is geared towards strictly as an environmentally friendly product vs red meat. Interesting.

Since this is the first generation of the product I’m sure they will work on the nutritional values as they improve upon the product.

I’m glad you clicked through and checked out the website for yourself. I’m certainly not an advocate for a diet of high sodium, high fat, highly manipulated food. But it does no one a service to pretend that the consumers or producers of these new “meat” products are lying to themselves or anyone else, or that “meat” is measurably worse than meat. And I don’t think anyone interested in health would encourage eating ANY fast food burger more than occasionally.

I agree about the toppings. The crisp lettuce leaves and sliced onion are a nice texture contrast to the rest of the burger, unlike McD’s shredded lettuce, which wilts from the patty heat, or their rehydrated dried onion bits. Somehow, to me, the Impossible Whopper doesn’t seem salty but the comparison regular Whopper does. I hardly ever use salt in cooking, and most fast food and restaurant dishes taste too salty to me. The only other exception is Indian food, which uses a lot more salt than I can perceive.

As I pointed on on another thread - in response to you! - it’s the planet’s health some people are concerned with. Including these people , the ones you seem most intent on dragging. Who don’t, as far as I can determine, claim that the Impossible Burger is more healthful for the human body, or more natural, than beef. So I’m not sure which foods you’re tarring with this brush of hypocrisy - being sold as “healthy” or “natural” when they are not.

It has not been my intent to drag anyone or anything anywhere. I made an observation about the amount of sodium in the Impossible Whopper, which is substantial.

I did not click the link you provided because I have been through the Impossible website before, and indeed the Beyond website. You are correct that the story line from Impossible is “save the planet.” Interestingly, Beyond–with nearly identical sodium levels in their product–does include “Improve Human Health” in their mantra. It is worth noting that vegetarianism–“meat-free”–is widely perceived as healthy, just as ‘organic’ is perceived as healthy and natural. Manufacturers need not lie for consumers to lie to themselves. The implication is there from common usage and the inference is left to the consumer. Impossible is not misleading anyone (the nutritional information is readily available) and I don’t believe that Burger King is either; Burger King has the huge amount of sodium (their number includes the bun, dressing, and other accouterments). Beyond skates a line by saying their goal is to improve human health and not, I believe, that their current product per se improves human health. This led to my reference in a post to Soylent Green (I have a warped sense of humor).

One could observe that about the only life form we have plenty of on this planet is homo sapiens and all that sodium might in some small way correct that circumstance. grin

The upshot is that current products from Impossible and Beyond are not good for people at the individual level, and are more ‘not good’ than the meat they offer to replace. If individuals choose to adversely effect their health for that of the planet they have the right to do that. I suspect that the overwhelming majority of Burger King customers have not thought that through.

I see consumer ignorance. I have not cited hypocrisy and won’t as I don’t see it.

The comparative question raise in a later post of whether reducing fat at the cost of increasing sodium is a good trade-off is a valid question. I don’t have an answer beyond (ha!) considering the question on the order of “do you still beat your wife?”

So just to be clear, you joined a thread in which people compare notes about a new(ish) product to tell everyone that this product is bad for them.

Sure. If there was post suggesting that leaping out between parked cars in the middle of a block to cross the street wouldn’t you post that was ill-advised? Or do you think everyone gets a blue ribbon? Do you suggest that Hungry Onion be a “safe space” where any silly idea, once proposed, should not be challenged?

Current dietary guidance is that both fat and sodium are bad at the levels most people, especially Americans consume them. As I pointed out, reducing fat and the expense of increasing sodium may not be in one’s interests. Check with your doctor and make your own choice. There are many alternatives that are 1. good for the planet 2. good for people.

I’m going to keep eating animals, almost always at home, because fast food is consistently unhealthy based on USDA and CDC findings. You stock up on Impossible Burgers. I’m okay with that.