If you make gyro meat, what is your best "go-to" recipe for it?

Hi all. I make gyro meat from time to time, generally 50% beef, 25% lamb (my wife’s not a huge lamb fan) and 25% pork by weight. There are many recipes out there, and also techniques (from loosely mixing meat and herbs/spices to beating the snot out of them into a paste or meat batter using a stand mixer paddle).

If you make gyro meat, do you have a favorite recipe and/or mixing technique? I’ve tried many, and also tried mixing and matching from several, and while it’s always good, it’s still not as good as I think it can be.

So if someone has some recommended recipes for gyro meat, I’d be much obliged to learn of them.

P.S. I usually don’t make it with bread crumbs but I do understand that’s kind of the industry standard for gyro meat used in most US restaurants, because that’s what the 3 major suppliers provide. I’m okay with either and my only household gluten avoider is also a meat avoider, so either is fine.

P.S. I’ve got 2 pounds of grassfed beef I got on sale a while back and the use-by date is Wednesday, so that’s why this particular question came up now. I bought 4 pounds originally and used 2 for burgers, but found I’m not too happy with how tightly packed together the grassfed stuff is. For burgers I prefer the store-ground stuff which is easy to break up into bits in a bowl for seasoning before forming into patties.

Are you making a version of the frozen cone of mystery ground meat that passes for gyros in the US? Can’t help you with that.

I prefer the vertical spit roasted versions made with either thinly sliced and seasoned pork or lamb. Sam Sifton wrote an amusing anecdote about gyros and while back in The NY Times and I have used his recipe for pork gyros many times.

There’s a Palestinian restaurant that has opened in Brooklyn which makes amazing shawarma from beef or chicken as obviously they can’t serve pork unlike the Greek places.

I wouldn’t mix meats but stick with one. If your wife doesn’t like lamb go with one of the other three. Probably a good thing to skip the lamb as the cost of lamb has really gone up lately. The Ottolenghi shawarma recipe in Jerusalem is tasty.

I’ve only bought gyros, both the processed type and the stacked type.

Yes, unfortunately I’m making the ground meat that passes for gyro in the US. I’ve had shawarma chicken, beef, etc. but never had authentic cut-style gyro in the US.

If you can point me to some restaurant that actually serves that whole-meat cut style gyro, please do! I’m salivating.

But yes, to confirm, what I am making is the ground meat mixture. Although I cook it in loaf pans with a brick atop to condense it.

Disclaimer: I haven’t made it. It looks similar to other copycat donair recipes.

Halifax donair is always made from the minced processed type meat.

I have only had commercial Halifax donair, but the meat used is the same as the fast food gyro meat and the frozen bricks of gyro meat.

Thanks Erica, his initial processing is similar to what I’ve seen and done, but the spices are quite a bit different.

Remind me where you are based?

Thanks, this looks fairly similar to what Erica mentioned, with the onion/garlic/paprika. The recipes I’ve been using are instead heavy on rosemary, cumin, thyme, oregano (more “dry tasting” stuff, I guess you’d call it?).

I’m down in the Southeastern US. I do get up to Chicago once or twice a year (sister lives near there) but she’s never seen the stacked stuff in her area, either. But I don’t think she’s looked for it.

She’s the first reason I looked at gluten content in the commercially-prepped stuff most US restaurants serve, by they way. She complained about not being able to eat gyros because of gluten and I was baffled, asking, “Why is there any gluten in gyro meat? I’ve never made it that way!”.

But I’m still looking for something that’s “Best of Best”.

My problem with my OP here is I didn’t specify I was talking about US-style, which is overwhelmingly (at least, everywhere I’ve had it) more of an emulsified sausage style meat vs. a sliced/stacked shawarma style meat. 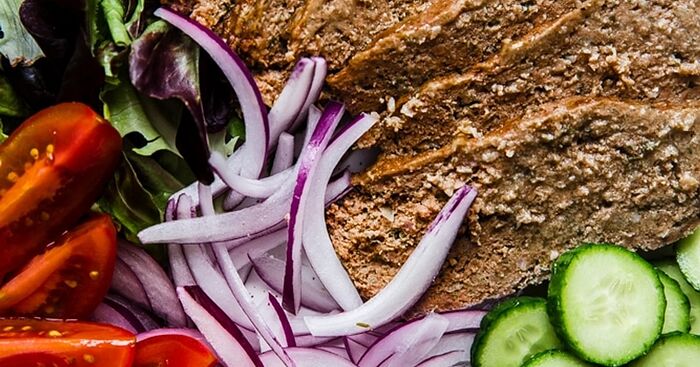 Hey guess what! Making juicy, super-seasoned gyro meat at home is easier than you think!

Carnitas should be meltingly soft on the inside and crispy on the outside. Shredded carnitas are wrong carnitas.

Gyros/shwarma/doner from stacked meat on a vertical spit is now quite common near me (DC area). Many places to choose from.

Thanks Steve. Here I see shawarma and doner, but nothing they’re calling gyro in the stacks. Could be a local provincialism problem, obviously.

This is closest to the one I do.

Thanks Greg. That’s pretty similar to what I’ve done, after reading it. Some herb/spice differences but basically the same with using a tea towel or linen cheese cloth to strain the onion. The only difference is (and probably the same in the end) is that I’ve been using a box grater on the onion.

My family’s Greek meatballs use minced raw onion in the meat mixture to help keep the meatball moist. Steamage is prob the desired effect.

Have you tried Biftekia? Some restaurants serve that in a pita, as an alternative to gyro and souvlaki. They’re smaller than burger patties, dressed with tzatziki. Not shaved. Might look at the seasoning to see if it’s what you like. 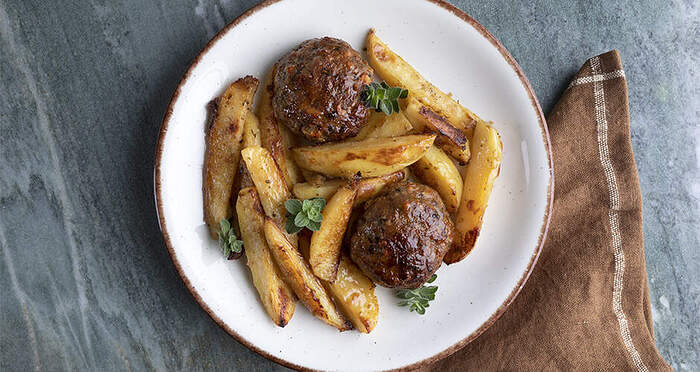 Clove, oregano & cumin in this one 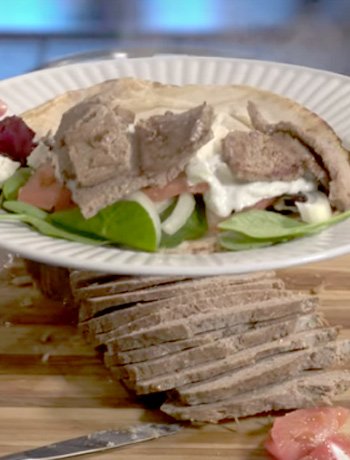 Make this classic restaurant-style gyro meat at home. Gyros are the most popular Greek sandwich and it is very easy to make. In Greece, layers of meat are roasted on a spit then sliced and served in a pita with tzatziki sauce. The Greek-American...

In a meatball, I would think as much. Usually some breadcrumbs to hydrate, or rice.

Whenever I take country kids to eat in a Greek resto, I assure the option of burger and fries. They can’t believe how the Greek place makes them both. the rest can eat souvlaki, moussaka, et. Grab a baklava on the way out, and all’s good.

Thanks! The Biftekia look like something we’d like. The Dimitras seems pretty close to what I’ve been making, as does Kenji’s (with some mods).

But the Bftekia is the most interesting of the bunch as I’ve not made burger quite like that - thanks!

Thanks Steve. Here I see shawarma and doner, but nothing they’re calling gyro in the stacks

I am racking my brain to think of a place in NYC/Queens/Westchester that serves stacked meat gyro and I’m coming up blank. Plenty of Lebanese/other Middle Eastern shawarma places have beef or chicken stacks, but IME Greek gyro is usually “lamb spam” around here.