If You Could Have Perfect Evenness and Response in One Pan, Which One?

Would it be a griddle, a large frypan, a saute, a “saucier”, what? Or would it be in EVERY pan?

This is actually a practical question, because it bears on prototype development for my ongoing pan project. For purposes of answering, imagine a material that surpasses aluminum, copper, silver, even diamond in conductivity. And assume you can have any lining you want–SS, enamel, whatever. Also, because of the conductivity, you can basically have any size “footprint” you wish, e.g., a 20" skillet.

It will be a fry pan or a suate. In theory, it should be a saucier, but I don’t make enough sauce to take advantage of that.

It would be a 12" (diameter) pan with straight sides about 3.5" high, with a handle on one side and a “helper handle” on the other and a tight-fitting cover. Any larger and I wouldn’t be able to lift it – unless this imagined material were also very lightweight.

A 4 or 5-qt saucier with a helper handle and domed glass lid. It should be nonstick, and able to tolerate at least 450F oven heat. Diameter 10-12".

Thanks, greygarious. For fabrication and transport reasons, we’re going with both a griddle and an 11.5" diameter x 6.5"H Dutch Oven.

Why not every pan? I already have that evenness and pretty darn good responsiveness in my cast iron cookware on induction. But I wouldn’t want both qualities in all pans. When I cook in my large wok, I hugely value the fact I can push things up higher on the side of the pan while I fry something at higher temp in the center of the wok.

For great looks AND those very same cooking qualities I love my old (1960s) Bock dove gray enameled cast iron pans with beautiful oiled walnut handles. Did I mention 1060s? '-) I don’t use them that much anymore because oiled walnut and dishwashers aren’t on very good terms. Not to mention the suckers are heavy. From that same era (the Kennedy era when Julia Child entered the national psyche) hostesses (who couldn’t afford or find a caterer) used to make any and all guests omelettes to order at cocktail parties, and I still have my mirror finished thick aluminum omelette pans which also happen to have oiled walnut handles. But that was back in the olden days when only farmers and cattlemen wore denim.

I suspect you already know this, but there is now a “material” just as you speak of. It’s a graphene-like “one atom thick” material, if I recall correctly, but it’s crystal lattice (if one atom thick can have such a thing) is that of a diamond and it works as a superconductor at room temperature. Now, how to make a cooking vessel out of it? Carry on! . :-p

Mine would be an 11-12" frypan with nicely flared sides.

But really, EVERY pan! Why not?

Good guess about the graphene, but not really close. Viking tried that, and it failed miserably.

To answer your question about Why not every pan?, understand that a nearterm goals here are for prototypes that will demonstrate the vastly-increased conductivity in A-B comparisons, and or use as test beds. We’re actually now going with a 20" griddle and a 14" rondeau.

I’ve concluded that this technology shifts some traditional balances in disproportionate ways. We can adapt it to all pan materials, which themselves can be varied for desired properties, e.g., heat retention, appearance, lining material, convenience, etc…

I’m anticipating a press release and industry launch in early 2016. Guess what food site ISN’T going to scoop the story?

Welcome to the light side!

Yes, ultimately I see this being used in every shape of pot and pan. But we have to start somewhere with prototypes.

Here’s another quality you can toss in to gain the eternal gratitude of all of the cooks of the world (if not now, then certainly later). A thinner, light weight pan that is absolutly warp proof, no matter how much you abuse it by overheating when empty and then pouring in cold liquids, and that also has superb heat distribution. If I could find a pan like that I’d be one happy camper! For me, in my advanced and wiser years, the aesthetics of a pan have settled farther and farther down the list of “essentials” in a good cooking vessel. But good performance is critical. Sometimes “ugly” is a truly lovable quality!

If we can make a cast iron (or borosilicate glass) pan that has 4x the conductivity of copper, could you deal with the weight? If light weight is a high priority, you would want an aluminum version–and that choice brings with it problems concerning lining (or the idea that aluminum is unhealthy) and induction compatibility.

Well, obviously the size of the pan dictates the overall weight, no matter what the material… So PROBABLY yes for the borosilicate glass, and a qualified yes for the cast iron IF it’s a nice little 5"x5" raised grids broiler pan for one that I’ve been looking for for years! Thought I’d found one on amazon.com, but when it arrived the raised grill bars are not as deep as the on line photo showed. Disappointing, but I still use it because I HATE dragging out a big old 10" square grill pan to broil ahi tuna for one! Which is something not always addresses by manufacturers: Cookware for one. As “globalization” is creating an ever-expanding upper echelon of educated males and females, more and more of whom are opting to postpone marriage and family, they can go crazy trying to find something like a well designed 5"x5" square cast iron broiling pan!

Way back in the '60s Pyrex or one of the other “glass to cook in” companies made a glass double boiler with lid that I loved! It functioned beautifully as a saucepan as well, and unlike pyroceram, did not discolor. It was fun being able to see how the “boil bubbles” traveled to the surface through contents such as peas, or to watch rice cook. But overall, glass is a pretty heavy material. EXCEPT: TITANIUM CRYSTAL…!!! I’ve replaced all of my everyday drinking glasses and tumblers with it, and about the only thing thinner than it is a paper cup, but these glasses are FAR more durable! I accidentally bumped one off the cabinet shelf and it fell onto the granite counter top, bounced twice, then landed in the mouth of the garbage disposal. And about a year later it’s still just fine, thank you! But I doubt it has the thermal shock resistance to make it suitable for cookware. Pity!

The ONLY direct contact aluminum I’ve used in my kitchen for at least 40 years now is the two walnut handled omelette pans I mention above, and water never touches them! I’m just not a fan of aluminum, whether anodized or not, or even when it has been endowed by man with the ability to ring like a bell. When all is said and done it is still aluminum! It warps, even when anodized. Try boiling onions or tomatoes in pure aluminum and you have a major aroma problem on your hands, as well as food for the garbage disposal. My guess is that even if aluminum was cast with a seriously “sturdy” grid (structural support) in the base of a pan the damned stuff would still warp! And it discolors easily, or maybe “eventually” for some of the more modern anodized aluminum. As a suitable material for any type of direct contact cooking vessel, I avoid it like the plague!

Besides my cast iron, the pan I pull out the most often is my 13 inch Sitram with copper center - love that pan! Threw out my all-clad and calphon for the three Sitram catering pans I have now.

Sounds more and more like a film technology. A 14 inch rondeau may prove the application, but seems a little large. I hadn’t thought about base material or lining.

Alrxander sez… “Sounds more and more like a film technology. …”

Now there’s an idea worth its weight in gold and then some! But make it a can of do-it-youself spray-on film that will give ANY pan even heat distribution and immediate response, then just give me an address to order it and mark me down for a six pack!

No, and that’s the only further hint I’m giving.

It’s a little cheeky to say (and not completely true from a physicist’s perspective), but this technology beats the Periodic Table when it comes to cookware. I cooked on it in a lab Friday.

Way back in the '60s Pyrex or one of the other “glass to cook in” companies made a glass double boiler with lid that I loved! It functioned beautifully as a saucepan as well, and unlike pyroceram, did not discolor.

Is this the one you’re referring to? 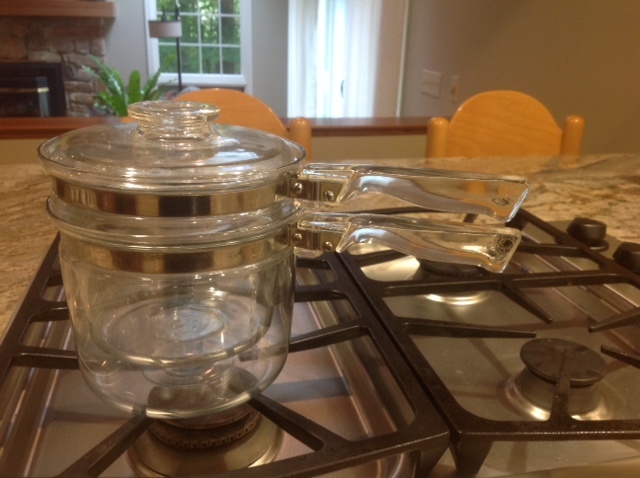 This is the pan I use the most, so much so that it lives on my stovetop and rarely gets put away. It is heavy, however, but provides even heat without scorching. Copper lined with stainless, nearly stick proof. Works for sauté, braises, soups - stovetop or oven. Come up with something lighter in weight, with those properties, and you’ll really have something!

At home on the hob or in the oven this is copper cookware that lends itself well to any kitchen environment. Whether stirring up a batch of delicious chili or oven cooking a rich boeuf bourguignon, you’ll discover a multiplicity of uses for this fine copper vessel. Designed with longevity in mind, these copper stew pans will provide decades of reliable service while managing to retain that blush of youth. A fine contender for your growing collection of useful copper cookware, these copper stew pans are dependable performers.

CindyJ asked: Is this the one you’re referring to?