How do you PANCAKE?

I take them traditionally, with syrup, fruit and maybe a dusting of powdered sugar (never butter), plain, or even in sandwich form (with eggs, bacon, potatoes wrapped like a burrito).

I love them savory with some peanut butter and plain Greek yogurt, or even with any kind of roasted vegetables or kimchi, as well as Chinese pork floss with guacamole, or even a sliver of avocado. Bueno!

Of course, pancakes as dessert is a given. Ice cream, chocolate syrup and custard are all fair play – either individually or collectively. Of course pancakes soaked in coffee liqueur with some mint leaves is never a bad thing.

How about you? How do you pancake? 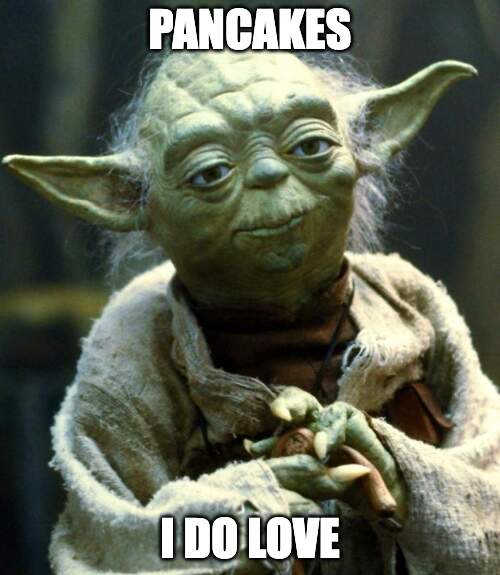 Crêpes with sugar and fresh lemon

Rolled pancakes with apricot jam inside

Palascinta- apricot, or chocolate , or flambé

I was a pancake fanatic in college, but not as much these days. One recent great batch was cornmeal pancakes fried in duck fat. The edges got nice and crispy. This was good with smoked trout flakes and sour cream.

My fav would be pigs in a blanket, followed by butter with maple syrup (or boysenberry). These days I find them kind of heavy so it is not something I do a lot. Prefer waffles, and even better… French toast. I just find them lighter and more versatile… luv a monte cristo, as well as some cheese, bacon, and veggie creations.

I haven’t made pancakes at home in decades. Just too heavy and too sweet for what I want.

Used to go to IHOP after the bar with friends. IHOP partly because there was one just a couple of blocks from the bar so none of us would get hopelessly lost trying to find it.

I do occasionally buy TJ’s Silver Dollar pancakes or Pankakor from IKEA. They microwave just fine as far as I’m concerned and satisfy any craving.

I order savory Oriental pancakes much more often than American breakfast style pancakes and have sworn that I’m going to try to make some at home but haven’t followed through.

I’m not big on American-style (fluffy, white flour, chemical leavening) pancakes with sweet toppings with the exception of a couple like lemon ricotta or whole grain pancakes. I also tend to like savory versions, just as I prefer savory French toast.
Generally I prefer crepes and similar styles or yeast-raised ones.
I really dislike soufflé pancakes. Way too eggy! I’ll take my soufflés baked.
But I’ll almost never pick a pancake over a waffle.

I grew up in a house where waffles and French toast were served whenever we had guests, so it was a huge treat to order pancakes when I went out.

I stopped liking sweet breakfasts about 15 years ago, so any sweet pancakes are for a snack or dessert, such as palascinta or crêpes suzette.

I am also on team savoury. I like savoury crepes. I like corn pancakes such as these Venezuelan cachapas (I dip in roasted red pepper sauce, sour cream, salsa, etc): 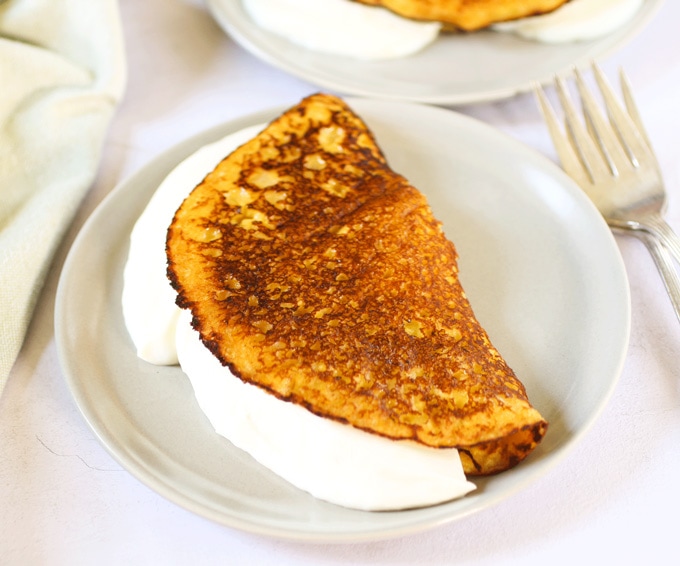 Cachapas are rustic and thin Venezuelan corn pancakes made from fresh corn and filled with a soft, fresh cheese.

And of course, cheelas / pudlas made of besan. And the entire dosai / uthappam family (I think of dosais as more like crepes and uthappams more like pancakes).

Pancakes (or crepes as the French and North Americans call them) are dessert. Usually traditionally with sugar and lemon.

It has been years, but if I was to make them, it would be blueberry buttermilk pancakes with copious amounts of butter and maple syrup. A side of bacon. I’ve been craving pancakes lately, it may happen.

this is exactly what I like best. lemon zest in the batter can be a nice addition.

I worked at an IHOP when I was 18 and for a couple of years after. I am pretty much done with buttermilk pancakes forever after that, lol.

I am a big fan of socca and other chickpea flour based pancakes. The 101 Cookbooks Silver Dollar Socca recipe, while not true to traditional socca, is delicious. My preferred cooking medium is ghee and they’re great with TJ’s everything bagel seasoning. But I’ve never made a batch I didn’t like.

My girlfriend loves blueberry pancakes, so I keep blueberries in the freezer.
I use the “just add water” pancake mix, so I guess that is cheating. I usually make them on Sunday mornings (once a month), but if the day got away from me and I don’t have enough time for a proper dinner; I’ll make pancakes for dinner.

We love the big three with real maple syrup. Our pancakes are a cup of flour, a little baking powder, a hearty pinch of salt, a splash of vanilla, an egg, and enough milk or buttermilk to thin the batter enough to make a thin, plate sized cake. We have been making more waffles since acquiring a NIB 1953 Landers, Frary, and Clark waffle iron. The recipe is like the pancake recipe but with pecans, less milk or butter milk, and a bit of melted butter. The French toast is sourdough dipped in an egg, milk, salt, and vanilla dip and fried with the top and bottom sprinkled with cinnamon sugar which browns and gets crystalline crunchy. On a feast day we might dot pancakes or waffles with a bit of Plugra butter.

If I have leftover bacon, the next morning I’ll crumble the bacon, thinly slice and lightly sauté some scallions, and mix these into the pancake mix. Sometimes I’ll replace some of the required milk with sour cream as well. These we eat with just some butter melted in. I often use the same additives for savory waffles, sometimes with chives instead of scallions. I’m not sure why but the same amount of scallion that’s good in a pancake can be overpowering in waffles (maybe due to differing final product water content).

My daughters whisk cottage cheese into a puddle and use that to replace a lot of the milk in otherwise regular pancakes. If we have ripe enough bananas, they’ll blend some banana in while whisking the cottage cheese.

Last night was waffles, though. A couple of days ago I got a bunch of raspberries cheap and needed to use them before they got moldy so I made a simple sauce for waffles. I topped the waffles with eggs over-easy. The hot runny yolk combined with the raspberry sauce and bread (waffle) was really nice.

I LOVE pancakes too, but I don’t make them often because my brain just doesn’t go there early in the morning. I would gladly eat them for lunch or dinner too, and have done that on occasion, but I also crave savory foods for dinner.

My traditional go-to American style pancakes is with blueberries, a bit of butter (optional) and maybe a wee hint of syrup. I prefer to do a light dip every so often than pouring them on top. I don’t like my pancakes (or waffles) soggy.

I am dying to try those super fluffy souffle like Japanese pancakes, but have yet to make it out to our one place that I know serves them. I do enjoy dessert-style ones when they are more crepe like. I’ve also had savory ones where the base is not the typical pancake - more like a wrap (the eggy wrap in Taiwan/China and also okonomiyaki) so debatable if you want to refer to those as pancakes or their own foods.

One of my fav waffles is a cross between what you do… I’ll chop some bacon and cook it up in a skillet, remove, and do finely diced/sliced white onions in the bacon fat until well caramelized. Then mix it all back up, and top a waffle with it, and set it on a plate with a small puddle of warm maple syrup and a pat of butter, then topped with an easy over fried egg with a loose yolk.

I like this guy’s channel (Alvin Zhou) for the simple, relaxing manner. His day job is being a food editor at Buzzfeed Tasty.

I keep thinking I want to try this one some morning (or night!) but keep forgetting to get around to it. It’s not exactly what you mention, more like something “inspired” by the fluffy Japanese pancakes.

His “72-hour beef Wellington” is worth watching, too, but off-topic.

I make two kinds of buttermilk pancakes, both with a mixture of wheat and corn flours. One is raised with instant yeast, the other with sourdough leftovers. No sugar in either.