That was very helpful, thanks!
So would the pesto be a botulism risk, and if not, for how long could you use it?

Thank you! I mentioned the calcots in my first post, and I’ve actually tried them “charred”. It seems as if the white part of the green onion was pretty important in that recipe, and the green part of my charred top was a little tough. I ended up blending it into a salad dressing.

These are about 12 inches long. I popped them off because they were bolting. I usually leave the others to die down naturally, but may just use some more tops before then. Yes; thank you! I’ve been loving those recipes, but include it among the flavored oils, and the cautions that come with that. I wonder if the places that serve it do something to acidify it. I’ve read that is what they do commercially.

Last spring the scallions at the farmers mkt were beautiful and abundant. I saw a tip to chop them and fill old water bottles with them, freeze and use as needed. They were great all winter when the grocery store scallions were not so great.

Thank you! I also saw one that had you freeze them single later and flat, and break/crumble off what you need as you go.

The places that serve it likely have higher turnover than home use (though it goes pretty fast when I make it).

You can also use up a lot in a kuku or a loaded quiche or leek pie instead of leeks.

Yeah, sorry somehow I missed that re calçots. I remember eating grilled corn on the cob brushed with spring onion oil, in Vietnam no less. Weird that it’s the only time I can tolerate spring onions otherwise it’s a big no-no. Has also been mentioned, a dip (with grated ginger) for poached chicken is also nice.

But if you need to get rid of them fast then I will agree with others on dumplings and Korean pancakes.

On a first glance I though this was a picture of garlic scapes and I got excited.

Now, if anyone else thought that, my favorite thing to do with them is pesto of sorts. Grind them up in a food processor with salt, oil, maybe some nuts or parm if I have it. Then proceed to eat it on EVERYTHING. Toss in pasta, bruschetta, top grilled chicken. mmmmmm! 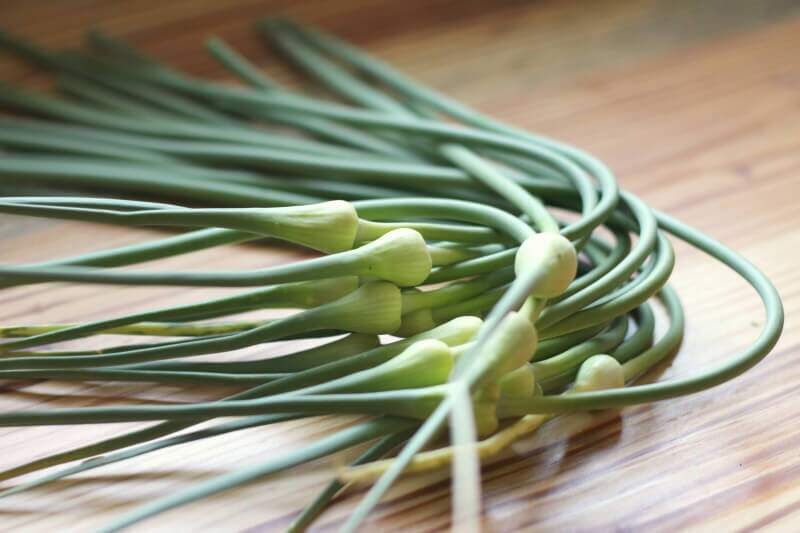 If these are what I think they are (garlic scapes?), it’s one of my favorite foods. I like it simply stir fried with some soy and sesame oil. Something like this: https://www.maangchi.com/recipe/maneuljjong-bokkeum

I like that stir fry idea. I just texted my mom to bring me some (and strawberries!!) from her garden. I’ll report back if I make it. Yum!

In addition to a garnish for soups and stews, stir frys and salads, I love chopped green onions in tuna and chicken salad and crab cakes.

It gives everything a savory freshness.

Hell yeah! That pesto sounds awesome, I will definitely have to try it when I get a chance!

You can buy them at the asian market in Marlboro btw!

I buy these in Chinatown - also think they’re a version of garlic or onion scapes of some sort.

But they’re not as intensely garlicky, so my favorite use has actually been chopped up and sautéed, either on their own like green beans, or with a protein. I even used them in an indian shrimp and peas dish last year when I (belatedly) discovered I was out of peas - best substitution ever!

They last for ages in the fridge.

So would the pesto be a botulism risk, and if not, for how long could you use it?

The one you linked? I really don’t know. Lemon juice is pretty acidic - moreso than (regular-strength) vinegar - but I’m no microbiologist and while I do try to keep up on foodborne illness from the “food prep” side I really have no idea if that proportion of lemon juice would be even theoretically sufficient for the volume of pesto (ignoring the fact that the acidity of fresh lemon juice varies…) As far as shelf life, “up to a week in the fridge” seems to be the standard public-health-authority party line when long term storage is discouraged due to a risk of botulism. And fwiw, I think the flavor would also start to suffer after more than a few days anyway - unfermented greens, including the basil and parsley, don’t taste very nice as they start to noticeably oxidize…

I don’t know how it might affect the flavor, but fwiw, you could freeze it, “indefinitely” as far as the botulism risk is concerned…

The simpler “pesto” I mentioned definitely poses a botulism risk (probably among others), since there’s no acidic ingredient in that and not even much salt to speak of in a preservative sense, against bacteria other than C. botulinum… And anyway, that one’s so quick and easy to make that it’s never occurred to me to make more than I need at the moment.

Why the old “water bottles”, specifically?

Even though they don’t taste the same (aside from a general “allium-ness”), I use them like “poor person’s chives” (since I can’t really grow chives on my not-so-sunny windowsills and avoid buying them since I usually end up throwing so much of a bunch away unless I’m cooking for more people than just myself)…

Not sure but it was quick and easy to grab the bottle and shake some ou5.

I’ve just “grilled” them in a hot cast iron pan. I love the looks of the curled up ones.

Make the kimchi!! I make white kimchi with asian chives and they’re fantastic

These super easy scallion pancakes would be great- use miso paste if you don’t have doenjang. It’s going to look like you don’t have enough batter, but somehow it really does work. Smaller size is easier to flip