I used to eat a lot of hamburgers. Like three times a week or more.

When I first got out of college, (about a hundred years ago), I went to work in Westchase and we ate at the Carillon Chili’s at least three times a week. They were good. On a whim I popped into Chili’s last week for an Oldtimer with Cheese, and they’re not nearly as good as I remembered them being. Smaller for one thing. And much more greasy.

More recently I’ve had great hamburgers at Burger Guys on Westheimer and Ripp’s Grill on Memorial, neither of which exist any more.

My two most recent Whataburgers were just this side of awful. I know that’s almost heresy in SE Texas, but nonetheless.

They were cold, the buns bordering on stale. These were both at the same location, out Westheimer just west of Kirkwood.

I simply don’t remember the last time I had a really great burger. I’ve been looking longingly at a local Fuddrucker’s that I haven’t visited in well over a decade. I was never a huge fan before, but I’m getting desperate.

And yeah, I know all about Christian’s Tailgate, Hubcap Grill, etc.

I can read the Houston Press as well as anyone else. I’m asking about your secret place. I won’t tell anyone else.

Good topic. I was just thinking recently myself we haven’t had this discussion in a long time. It used to be a staple topic on some other discussion board or other as I recall.

But the Houston food scene has changed drastically over the last few years as has the burger scene. I haven’t kept up with all the trendy places that have gotten into the game and I don’t eat burgers as much as I used to.

Back when, my favorites would have included Christians’s (original location only), Lankford’s, and Blake’s on Jeanetta (partly because it was closer to me than any other good ones). I also loved old-timey burger stands but I haven’t been to Someburger on 11th, Sparkle’s on Dowling or Jaime’s in Rosenberg in years.

I like Bernie’s Burger Buses - haven’t yet tried his brick and mortar place - but the best burger I’ve had in the last couple of years was the Frito Pie Burger at Hubcap on 19th. 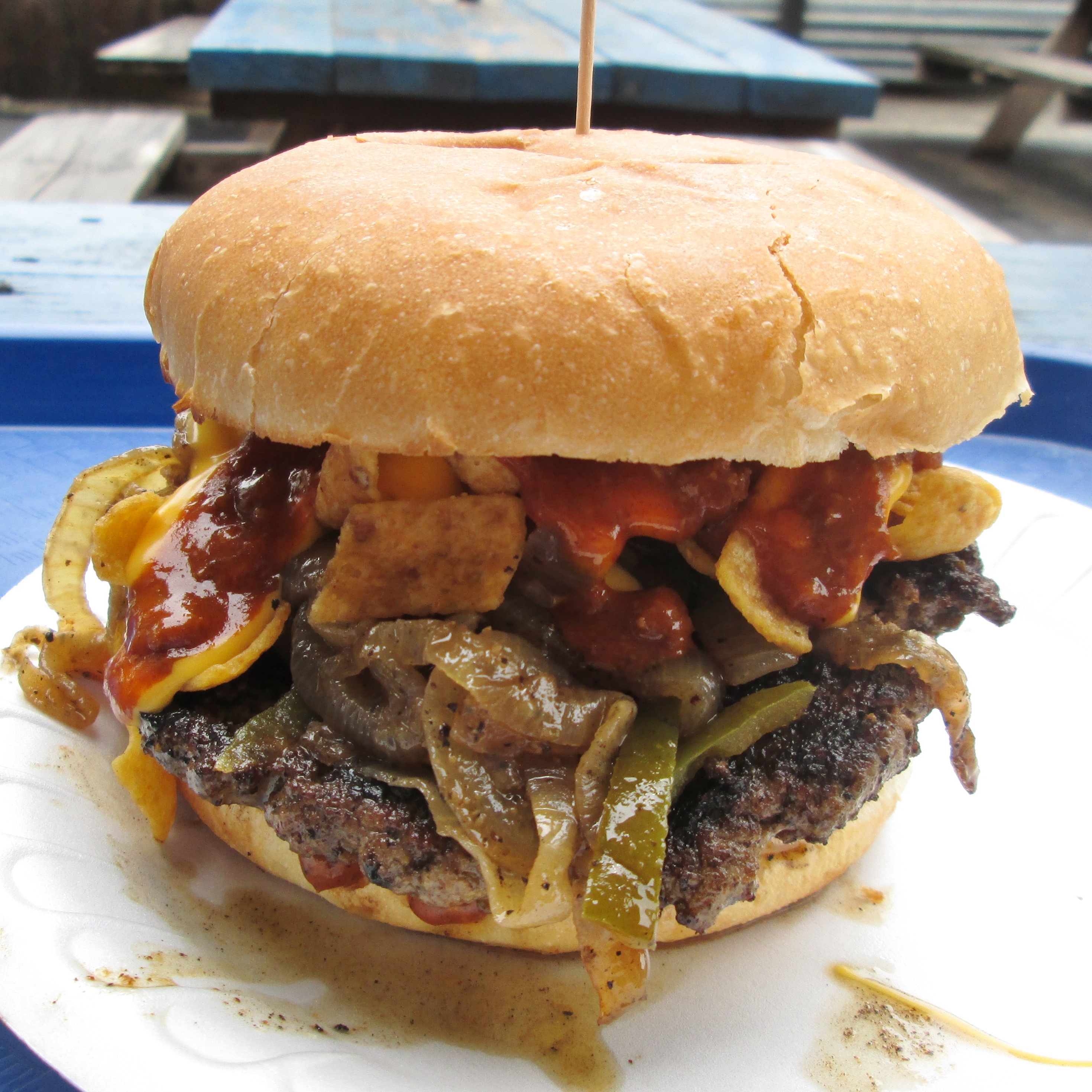 I keep thinking I need to go get another one. Beat anything I ever had at Burger Guys!

Ricky Craig has been a controversial character but he not only knows how to put together a good burger, he seems to be able to communicate to his staffs how to replicate. He does some pretty screwy burgers too; I tried the muffaletta burger once and I thought it was a very poor concept and I’m not even slightly interested in the one with peanut butter.

Okay so I thought of more I wanted to say. Forget Fuddrucker’s. Go try Blake’s and see what you think. It ain’t no Burger Guys but it’s pretty good and it’s relatively close to you. Get yourself some Hank’s Ice Cream and a piece of home-made cake. Tony Vallone supposedly goes there. Disclaimer: I haven’t been in about 5 or six years.

I agree on Whataburger. Used to be great when they emphasized they didn’t start cooking your burger until you told them to. They haven’t claimed that in years. Probably to speed up service (and get more customers through the line) they now emphasize you can have it 37 billion-gazillion different ways. Last time I went to WB was 11 years ago. I was thru the drive through in 60 seconds. They not only didn’t wait to cook that burger when I told them what I wanted, they cooked that burger before I even left home.

I’d forgotten about Blake’s. I remembered it only as a mediocre bbq spot, and had forgotten they were pretty well known for their burgers.

I’ll hit it the next time I get the chance and report back. Thanks for the memory jog.

I don’t remember ever trying the Q but yeah, I suspected it was pretty bad. The burgers aren’t up to Christian’s, Burger Guys or Hub Cap but for a mom and pop burger joint they’re pretty good.

Sign me up with folks that haven’t had good results from recent Whataburger trips. The burgers were cold. Yuck.

My current favorite burger places are, guess where, okay, Katy.

Pappy’s burger with the Sheila Partin sweet sourdough bun. You have to ask for the hand cut fries as they have both those and frozen. They throw in some fried poblanos too. I had a taste of their lemon pepper chicken last time I was there and it was delicious. I’m going to see if I can get it on a sandwich next trip.

As for Whataburger, my husband loves it but the last few times we went they put the core white lettuce on my burger. It’s bitter, I want green lettuce. So while we were on the road the 4th of July, our choices were slim so we stopped at Whataburger. I asked that they put GREEN lettuce on my burger and was told they save the green lettuce for salads. Honestly? You can’t afford extra lettuce so the sandwiches aren’t piled with the white bitter stuff? That was the end of Whataburger for me.

Pappys is pretty good; we eat there fairly frequently though I rarely get a burger.

We always sit in Fran’s section by the windows. She’s an icon.

JC has logged in with a slightly different moniker. Bellaire Broiler Burger is old school throwback with perfectly good greasy flame broiled burger. I’m not a cheese guy with a burger but the last time I was there they used cheddar. The chili cheese burger is a complete mess but good. It’s on Bissonnet between S. Rice and Chimney Rock in what was commonly referred to as the Bellaire Triangle.

Whataburger. The only way to do it right is to dine in and nicely ask for a freshly cooked meal and explain you don’t mind waiting. At All. The Wifeacita and I did that last week and were rewarded with a nice, hot tray of goodness.

Conversely, I gave the dear girl a gift card as a Christmas stocking stuffer and no sooner had she mixed her Dr. Pepper and Coke concoction and wished each other a Merry Christmas in January when our cold pre-cooked burger arrived. The Wifeacita was expecting a hot Whataburger but our second little Christmas was ruined as she was very disappointed.

I ratted them out in an e-mail to the home office and got a call from the manager the next morning offering a free meal. I wasn’t looking for a free meal but I didn’t turn it down either. I did e-mail back afterward with a glowing report on the food, service, and cleanliness, all of which was spot on.

The moral is ask nicely for a freshly cooked meal inside, and if I must go through the drive through I get a double Whataburger Jr. as they don’t seem to be stockpiling them gathering ice.

Brother Doobie have you forgotten Fajita Flats makes a great burger.
You might also try the Petrol Station and have a beer while there, I must admit I haven’t been there in a while.

Yeah I guess I had. Thanks for the reminder.

So, let me quickly add an update to my favorite Katy burgers.

They’ve moved into a place with what can only be described as a rough biker bar atmosphere, with smoke so thick you cannot possibly stay there unless you’re smoking yourself. The language is coarse, the behavior of the patrons “colorful,” and the entire ambience so unpleasant and off-putting that the last time I was there, a few days ago, I left without ordering anything. And, despite the fact that I only stood in the doorway gaping in disbelief for no more than five minutes, when I got home, my neighbor screwed up her face and said, “Where on earth have you been? You smell like an ashtray that hasn’t been emptied in a month.”

Go try Blake’s and see what you think.

Finally got by Blake’s today for a takeout order at the request, (command?) of my dear mama. She was waiting for some workmen for her kitchen redo and just wanted a burger - she said “Whataburger, Beck’s, whatever” so I thought of Blake’s.

Called in the order on the way over and schlepped them back to mom’s. I thought it was very good. Half pound of fresh 80/20.

Other notes: Supposedly, Frank Sinatra was a fan of Blake’s burgers according to the open book on the counter. I never even looked to see what the book was!

They’ll smoke your meats for $2/lb.

They have smoked pork loin.

They seem to be a really nice, old style family run and family oriented neighborhood joint - my kinda place.

Good stuff. I’ll definitely be back. Thanks again for the reminder .

Glad you liked it. I haven’t been in several years - I just don’t eat burgers very often. I never heard that about Sinatra but did read one of the local Tonys named it as his favorite - Tony Vallone or Tony Mandola - I’m sure it was one or the other.

I forget what wood they use - hickory? 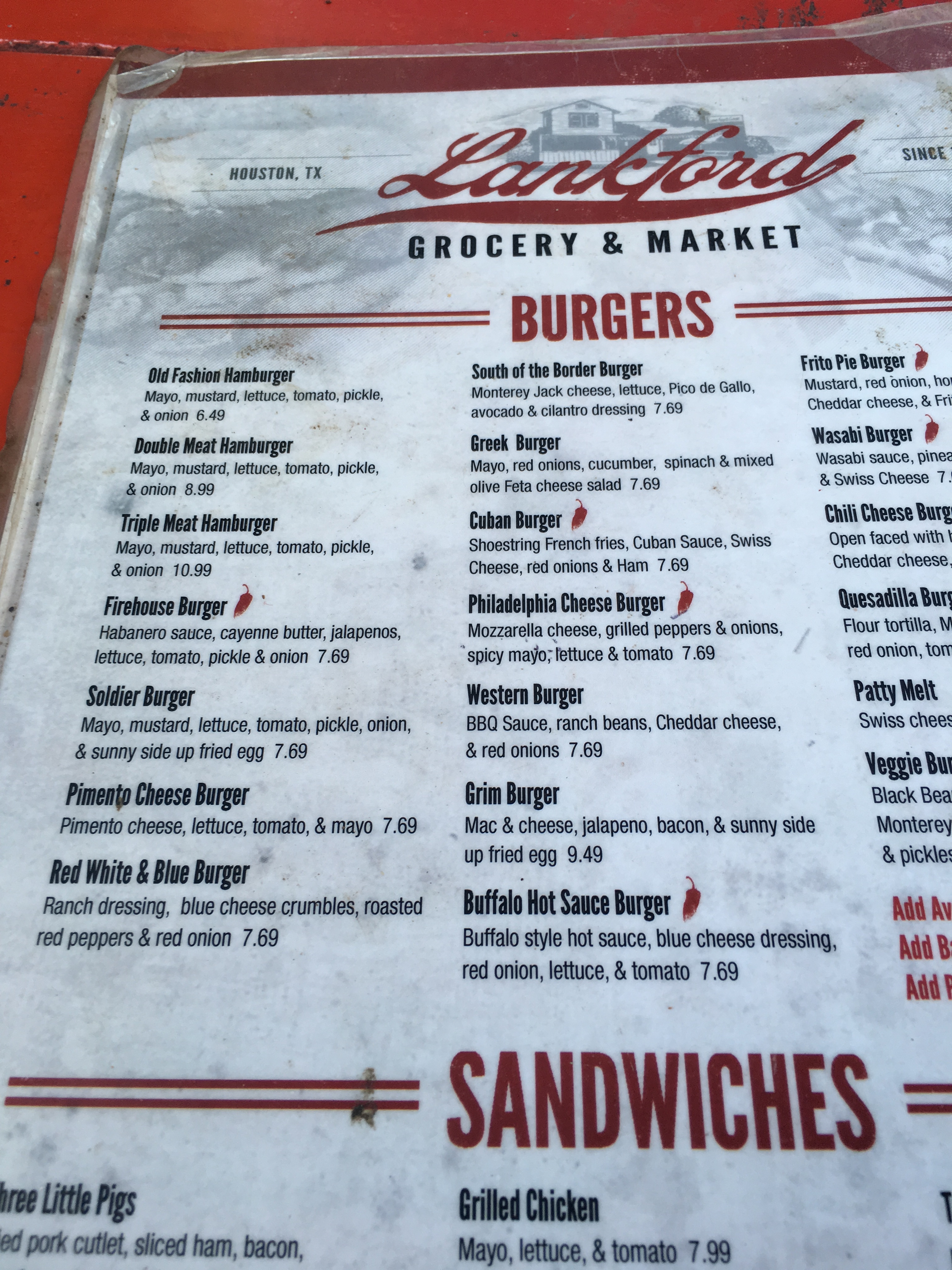 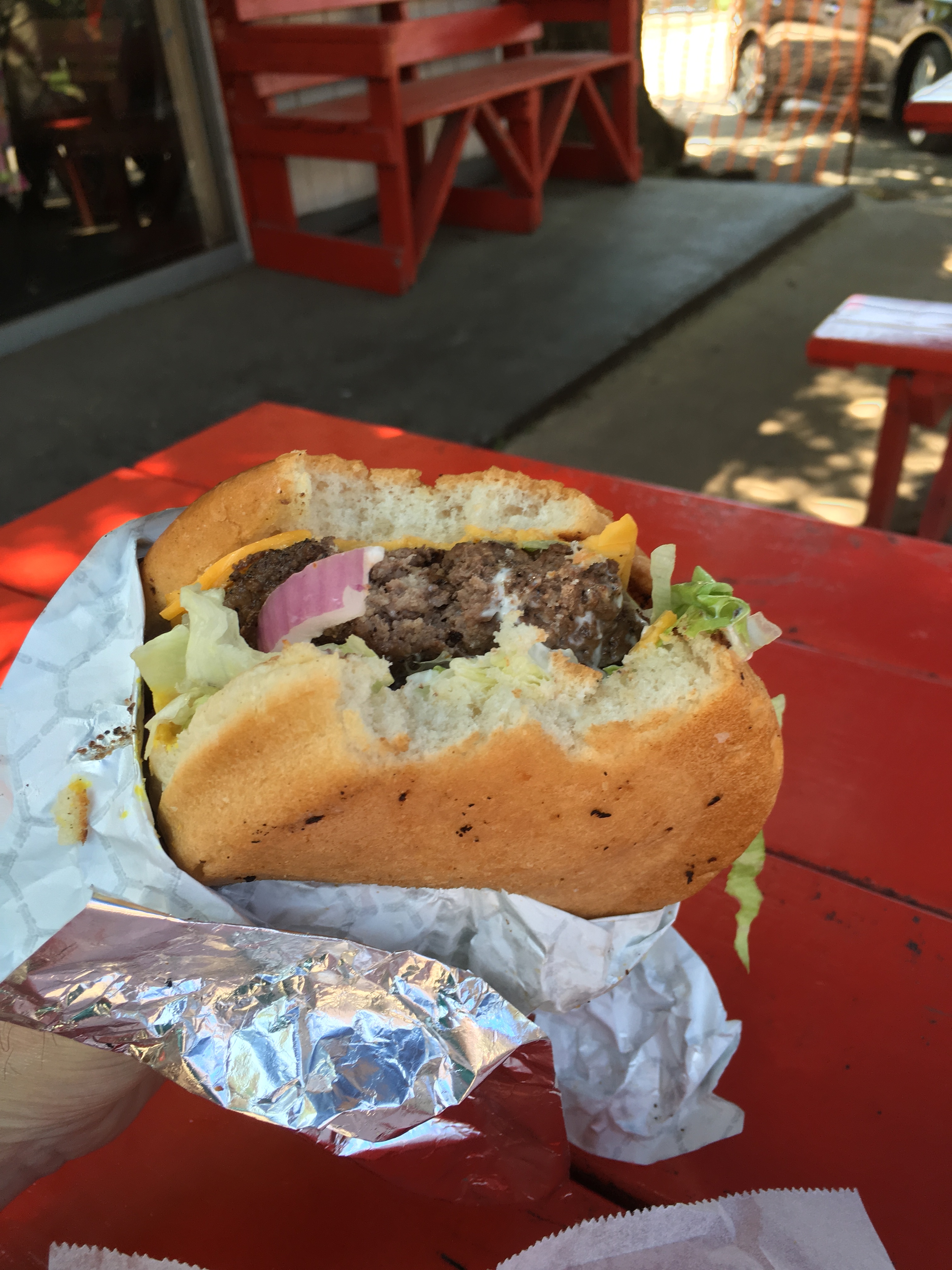 I had a burger at Lankford once and didn’t get the love. It was dry, much like this looks. I’m a fan of the drippy burger.

I haven’t been in years but that doesn’t look very good to me and doesn’t look like what I remember. I remember Lankford burgers as being very messy.

I have an acquaintance who just recently discovered Lankford and has been after me to join him for lunch. I’m just not into burgers that much anymore and that picture doesn’t help.

Maybe a little overdone, but I’d eat it in a heartbeat.

Made an unexpected trip out to Katy today to look at a car with a buddy and we were wanting a good burger for lunch. I revisited this thread in the hope that my ole friend Jaymes had chimed in and lo and behold!!! I could tell you that I had actually “remembered” that Jaymes had chimed in but that would be a lie. Instead, I merely “hoped” and yada yada…

Hit up Chuckwagon and it’s a nice little place. I had the Chuckwagon Cheeseburger that comes with “One Side”.

Half pound patty on a sweet, (Sheila Partin?) bun with lettuce and tomato. Choice of cheese - American, pepper jack or cheddar. I’m a cheddar man, myself. Pickles, Jalapeno slices, (both fresh and pickled!), and onion were available at the condiment bar along with mustard, mayo and ketchup, (and Ranch dressing and sriracha mayo).

It was very good. Just what I wanted.

I also had onion rings and my friend fries. Both were the Sysco frozen variety, edible but only barely.

I can’t speak to the barbecue, but the burgers were good. Oh also, the proprietess was having a bowl of chili at a neighboring table so of course I had to bug her. She swore they made the chili in house and asked if I’d like a taste. She had her daughter bring me a small bowl with a few spoonfuls. I was stuffed from the burger so it was more than enough. Verdict? Pretty good…but not as good as mine!

This looks interesting, the second (at least) location of Gourmet Burgers by Papa Zack of Il Napoli fame, going in on Memorial @ Dairy Ashford. A yelp search turned up this glowing review of another location, but for the life of me I can’t tell what’s on the right of that picture, looks like eggs maybe? With tomato and fries? 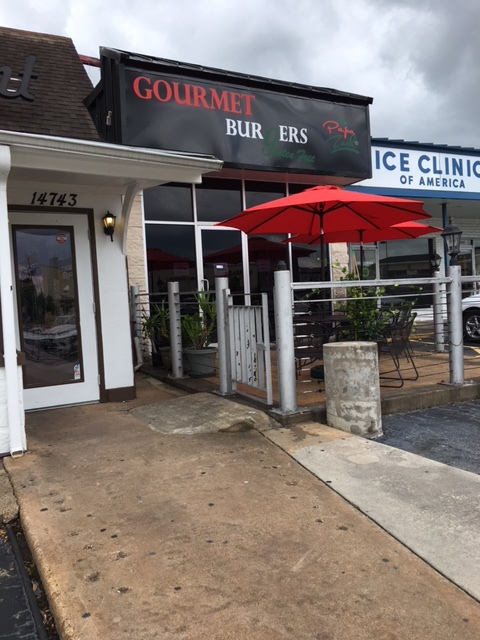 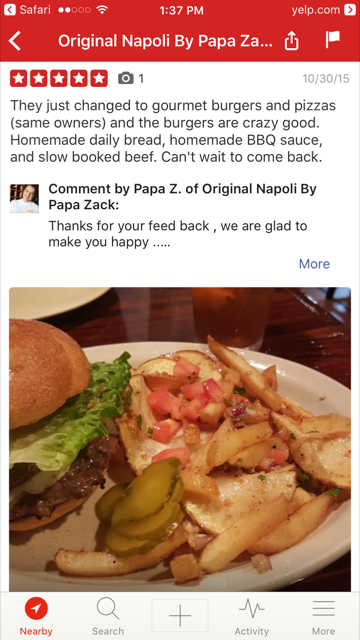