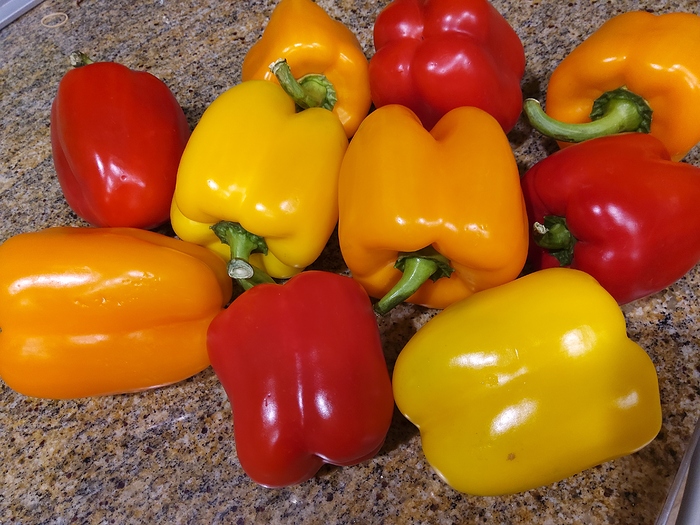 Will freeze some, probably roast and peel some.
tori avey-how to; roasted bell-peppers

Maybe a sauce or soup.
What would you do?

How do you roast yours? I use my stove, but it’s messy. 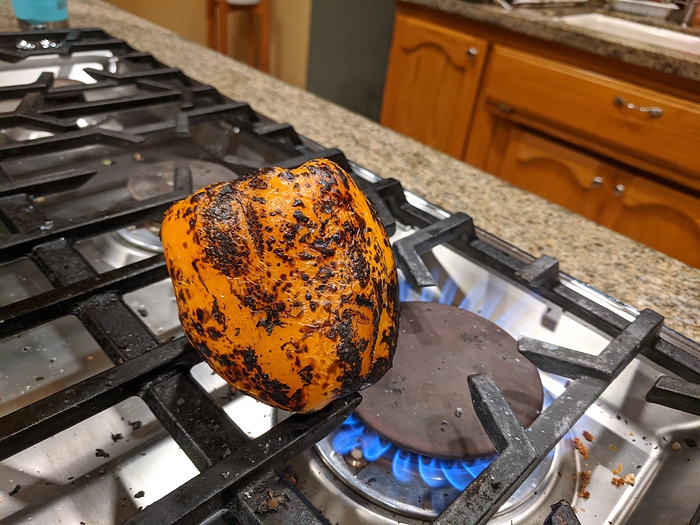 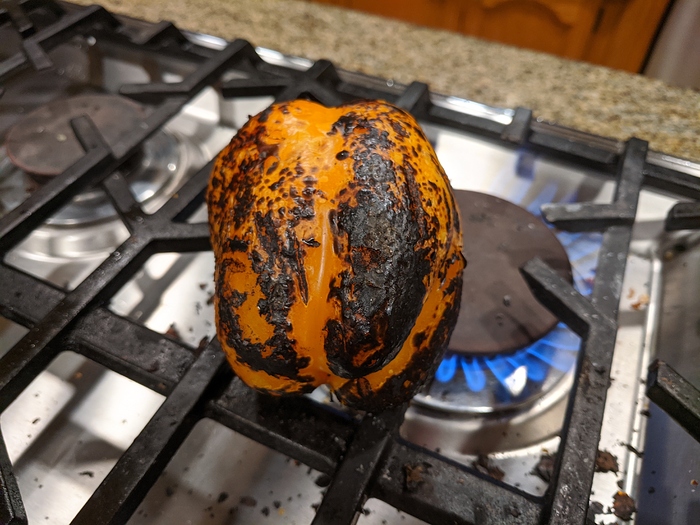 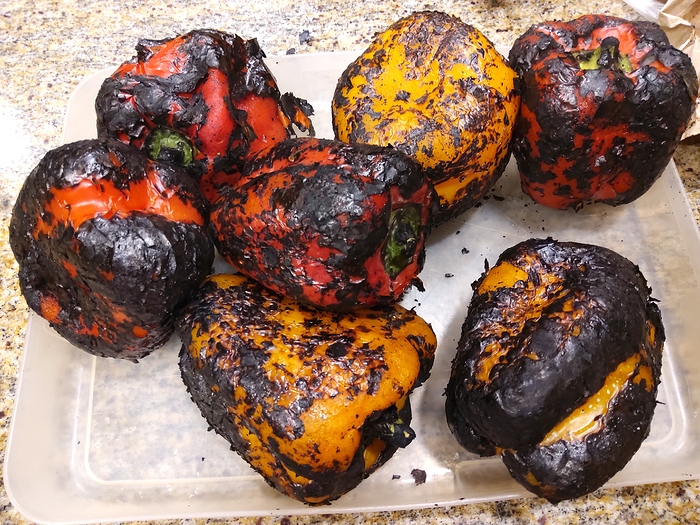 If I’m roasting a single pepper, on the stove. Multiple peppers, under the broiler. And I would make red pepper hummus and/or red pepper vichyssoise.

I usually eat them raw or in stir-fries, “fajitas”, in pasta sauce.
You might be interested in Portuguese-style pepper paste called “massa de pimentão”

If roasted there are some options:

Only Mexican pastes from dried chillies for me these days. Brought back loads of Mexican chillies, especially chipotle.

Roast, and soup, definitely. If you’re looking to actively use them up, muhamarrah is a good way to “reduce” them down to more manageable size, and while I’ve never actually tried it, I think it should freeze well, given the lack of texture to worry about… (a little liquid might separate upon thawing, but that should be re-stirrable-in? I would stick with the red ones and maybe the orange for that, I suspect yellow muhamarrah wouldn’t look very appetizing… Given a choice, I prefer stuffed tomatoes to stuffed peppers, but stuffed peppers are good too, especially at this time of year when we really good tomatoes are hard to come by. Matbucha is also great stuff. I prefer it made with fresh tomatoes, but even with canned it’s very good, and a mixture of canned tomatoes and even a few fresh romas gives it a better texture than canned tomatoes alone. I prefer mine much more evenly balanced between pepper and tomatoes than the recipe on the site you linked, and I use more (mildly) hot pepper, too. Also, imnsho, sugar has no place in matbucha. It’s plenty sweet enough from the tomatoes and peppers - I really can’t imagine what two additional tablespoons to that quantity of vegetables would do to it…

In general, I find yellow and orange peppers a little problematic in terms of esthetics - they look fine just roasted, or in strips and sauteed, but blended or chopped fine, I think they have a tendency to get a little muddy-looking unless there are very few other ingredients involved, or at least ingredients with darker coloring…

As for roasting method, I usually do it over a stove burner too, but I hold the pepper on a carving fork or other suitable implement instead of resting it on the grate - still ends up a little messy from “micro-splattering” that isn’t obvious while it’s happening, but that happens in the oven, too…

Thanks everyone! I often freeze them cut up in small dice or strips when I find them on sale, so I will do that.

I made muhamarrah a few months ago, and really enjoyed it, so I’ll be sure to try that to. It reminds me of romesco, so maybe I’ll compare which one might keep or freeze better. Sounds like bieber salcasi might be similar, and maybe the “massage de pimientao”, but I think I’d prefer all of those a little spicier. Can I add some of my frozen chili peppers? They are mostly chinense. I froze some Aji Amarillo paste as well.

I’ve never tried a pepper soup before, and this sounds like the time to try, but would “house peppers” be good for this? Would the flavor suffer? I don’t know that I’ve ever bought hot house peppers before, at least not on purpose.

Didn’t even notice the Matbucha @MikeG. I’ll check it out.

Chilled soup made with roasted peppers is nice in the summer. In case one is bored with gazpacho.

I’ve never quite understood labeling/advertising “bell peppers” as “hot house peppers” - the only difference I’ve ever noticed between them and field-grown is the same basic difference between field-grown tomatoes and hot-house tomatoes (which are pretty common during the off-season, at least here in the NYC area, though they’re very  rarely labeled as such). They tend to be a little bigger and more uniform, and well, “perfect looking”, but like hot-house tomatoes, also a little more bland in an “overly uniform” sort of way. But unless you’re comparing them to truly local, perfectly-plant-ripened red/yellow/orange and recently-picked examples, I don’t think the flavor is significantly different.

As for chiles with peppers, I also like more chiles in most recipes that call for “some” chile (one little hot pepper in a couple of pounds of matbucha, for example, is just silly…) But not being a massive chile-head, I don’t use chinenses for that, since I want more “chile pepper” flavor than I could get with an amount of chinense-variety at a heat level I could tolerate… For matbucha, for example, I usually use several of the long “cow horn” type chiles and a small handful of serranos per 3-4 pounds combined of peppers and tomatoes ; the bigger ones for the flavor more than the heat, the serranos for both flavor and heat. (I also roast and skin those, too, fwiw…)

Thank you @MikeG! I don’t think I’ve seen them labeled “hot house” before.

I WAS comparing , although I am not nearly as picky about peppers as I am about tomatoes, which I almost never buy out of season or from a grocery store. Strangely, I actually like peppers more, but grow more tomatoes! Maybe I’m hoping to grow some that I really like.

Hope to start some seeds today!

Last night I had some of the roasted peppers with some brie from a previous escapade, and now I’m wanting more of those flavors.

Maybe I shouldn’t rule out some savory ideas! Like these Brie Cherry Pastry Cups. I could use my pepper jelly. Bacon Sausage Quiche Tart Smoked Gouda and Ham Appetizer Tarts

I’d like something that doesn’t rely on much bread.

We have been here before:

These days my head isn’t working. I bought 8 red bell peppers thinking that I had bookmarked a recipe from a sample book on an interesting family red pepper sauce for pasta (it wasn’t Italian, I think), I briefly read and remembered it was quite labour intensive, like it needs 2 days. But the fact I forgot to bookmark the recipe, I think it is lost. What is your best recipe? I’ve made a lot of mixed tomato and pepper sauce, but never a smooth bell pepper sauce. Thanks in advance!

I missed that one! Thanks!

Working on muhammara and variations again.

Dice some for the freezer.

Stuffed peppers (great if they don’t taste like much).

If they taste decent, dice or julienne for salads.

Roasted Peppers, onions and potatoes In a one sheet pan setup. Then enjoyed with grilled brats or italian sweet sausage in a tasty sandwich.