This recipe popped up in my FB feed this evening and I just so happen to have yogurt and strawberries to use up. It is Greek yogurt so I might have to add some extra water. We shall see!

In the past, I have made the argument that all sorts of absurd things, from fruit crisps to slab pies, pizza, salade lyonnaise, risotto, stuffing (!), latkes, cookie bars and even shamelessly decad…

This almond joy ice cream is very tasty. I did add about a teaspoon of coconut extract because that trick worked for my Toasted Coconut ice cream from The Perfect Scoop. The flavor of the ice cream and all of it together was very good. It still was pretty soft, though, after a couple of days in the freezer. Next time I’ll skip the extract just to see if that has any significant impact in the hardness. . . and there will be a next time.

The recipe calls for Greek style yogurt so you’re good to go.

How come nobody told me when they were interviewing for the job of frozen desserts taster? 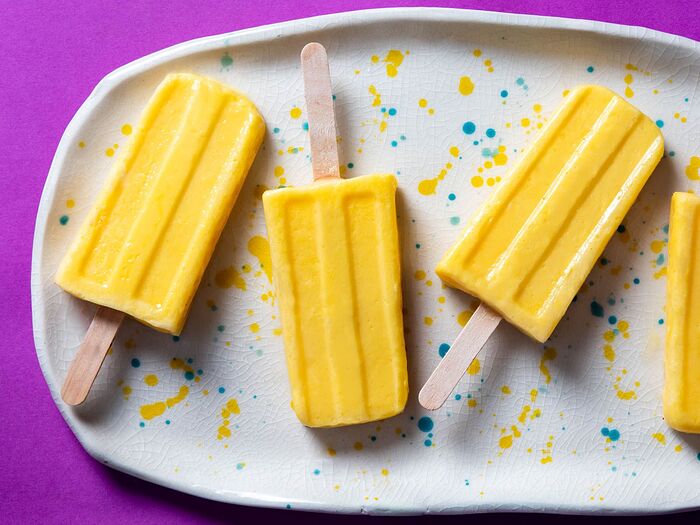 These Mango Popsicles Are the Best Summer Treat

Has anyone made the chocolate peanut butter ice cream from The Perfect Scoop? I made it today and it’s unbearably rich. The texture is almost frosting like. I’m just wondering if I did something wrong or if this is just what it’s like. I’ve made many ice cream recipes from this book and never had any issues before.

This is one of the easier ones. You whisk heavy cream, Dutch processed cocoa, sugar, and a pinch of salt in a heavy sauce pan. Bring to a rolling boil, whisking frequently along the way. Then take off heat and whisk in smooth peanut butter. Stir until thoroughly mixed. Chill—I did about 3 hours, and then put in ice cream maker. I tasted the ice cream both immediately and after freezing for a couple hours. Same issue.

For peanut butter I used a natural peanut butter — the Kraft “just peanuts.” It had been thoroughly stirred and resting upside down in the fridge. The texture was solid.

ETA I think I discovered the potential culprit. I used heavy cream instead of the called for half and half in the recipe, which I somehow misread. Could that have been it?

“Not natural” peanut butter contains sugar and often stabilizers. Using natural style peanut butter and substituting cream for half and half significantly changed the recipe.

Are you working from the new, revised version? Because mine (earlier edition) doesn’t specify anything beyond smooth peanut butter in either the headnote or ingredient list. Anyway, I suspect it was the cream. Darn. What a waste.

I am using the revised edition.

However in the discussion of ingredients at the beginning of the book it says,

The recipes in this book mostly call for commercial peanut butter. Natural-style peanut butter will release too much oil when mixed with other ingredients."

I just looked and mine also says that in the ingredient section. It’s good he revised to actually specify in the recipe itself, because when a book has less than a handful of recipes calling for peanut butter, it’s weird to expect that someone would go back and check, or remember that small detail. It’s not like it’s a specific type of olive oil for a Greek cookbook or something.

But anyway, in this case the fault was mine—the richness is the issue, and the cream explains it. I was throwing it together quickly after flipping through a couple recipes to see what would be easiest to make while watching my kids, and I must have scanned past it. I was looking to use some heavy cream I had. Oh well.

Could you let it melt and add some milk, then re-churn? Would cut the richness, but not the low-effort ice cream you originally had in mind?

In general it’s good policy to assume commercial peanut butter with baking and dessert books. It’s what people tend to grow up with and what classic recipes are made with.

I have always read to use commercial peanut butter unless natural is specified. I grew up with hippie parents who only let me eat natural peanut butter so Skippy, Jif, etc. taste off to me.

Thankfully, health food stores have started carrying a hybrid called no-stir peanut butter. It has sugar and salt, but no stabilizers, trans-fat, etc.

Yeah I didn’t grow up eating peanut butter at all, and as an adult was kinda bummed when I started baking and realized that almost no authors ever said it was fine to use natural peanut butter rather than commercial. Unlike other ingredients where you can get away with substitution, it really will make for a dramatic difference in the end result if you try to switch to natural peanut butter in recipes not specifically formulated for it.

All is not lost - if you don’t want to rechurn, you could use in milkshakes, diluting with milk, and or regular vanilla ice cream. Bananas would be good in there too.

One liked it (but I think just wanted ice cream no matter what), the other had a few tastes and said it wasn’t good.

Thanks! These are great ideas.

As a matter of fact, I just made these with wonderfully sweet blackberries from farmers market … I strained out the the seeds, not a fun job! Dirtied a lot of dishes. Used 5% Fage yogurt that I found at WF.

My first batch was not pretty, I’m out of practice, haven’t made popsicles in at least 3 years. Second batch fine. For me it’s best to add the sticks after 1.5 hours in the freezer.

The farmers market has incredible plums from Frog Hollow so next up will be Roasted Plum Popsicles from People’s Pops. 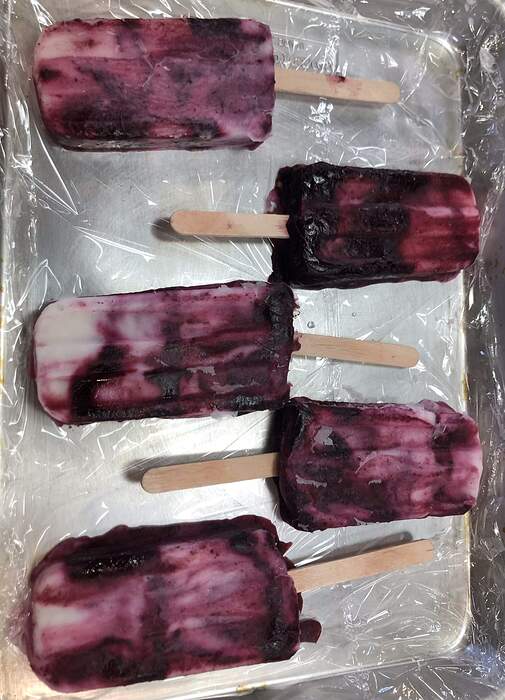 You are fortunate to have a nearby farmers’ market with Frog Hollow as a vendor.

Their fruit is incredible. Unfortunately, when I’ve had them ship it most is rotten by the time it arrives.