Please update when you sample both!!

I made another batch of the peach frozen “yogurt” today. Recipe and method same as last with one exception.

What I did differently was leave tiny patches of skin on the generally peeled peaches, and reserve the last quarter of a peach – which I diced finely - until the very end after everything else had been incorporated, giving the blender one last blitz after adding it and before chilling the batter. This was in hopes of adding a little texture – both physical and visual – to the end product. You couldn’t see much a difference after that final blitz, but the mouthfeel had a little more texture.

I ran it through the ice cream maker today, and having sampled what was left on the blade, I think I would consider the textural bits an improvement (for our tastes) and will keep that aspect going forward (and maybe even forgo the final blitz in hopes of slightly bigger chunks).

I had a serving of my first successful batch of peach last night, and drizzled on some berry sauce (black rasp, blackberries, raspberries, sauce de-seeded) I made for another purpose. REALLY liking that combo.

How does peach schnapps differ from peach brandy?

Peach Melba is a classic for a reason!

I feel like I should call this Guava Journey

.
Recently the neighbors dragged me off to go pick sacks of avocados at a relative’s farm and there were guavas there. I didn’t really want any because our next door neighbors have guavas which are frankly delicious and perfect for eating, whereas these weren’t that tasty. Still I didn’t want to say anything so we took some and then the neighbor insisted I take them all.
I don’t like guava paste. It’s too sweet. So I tried making a jam with a little fresh ginger and some vanilla. It was pretty good, but truthfully I just wasn’t feeling like making any baked goods with guava except maybe a cheesecake and no brick cream cheese has been seen here in about a month.
I decided on popsicles. I added water and a bit of simple syrup, salt, and lemon juice. I then thought “why not just make granita instead?”, and poured the mixture into a dish. Some hours later it seemed a bit too thick and concentrated still. I poured some more water in and realizing that there was no time to go through the stirring process, left it to freeze to then put in the food processor today. And that’s how this sorbet came to be. Frankly for sorbet it could do with being a bit sweeter and less diluted than for granita, but it’s still really good! It’s got good flavor and feels nice and refreshing. The color is a pretty pale pink. 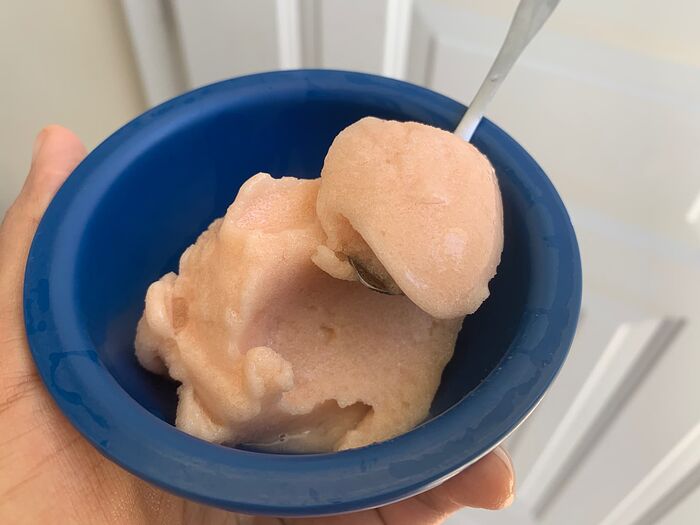 For years before I had an ice cream maker, I made sorbets that way, freezing the fruit mixture in a pan, then buzzing it in the food processor. Honestly, it works a charm.

I resorted to it recently when my mom was making soursop ice cream and we had to accept that the Cuisinart ice cream maker simply does not work anymore. The ice cream doesn’t spin but sits in the bowl hardening on the bottom. So she froze it and left it and I threw it into the processor and it was great!

Pistachio gelato from David Lebovitz, which I saw on this thread. We really liked this—it was smooth and creamy, despite not having any cream and being churned in my decades old hand cranked frozen canister ice cream maker. 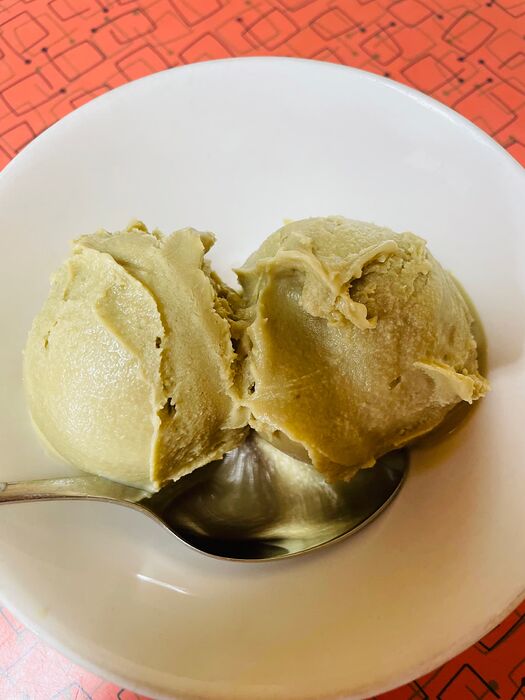 King Arthur’s Blackberry Raspberry Frozen Yogurt. I used locally picked blackberries, and some of our garden raspberries frozen from last year. Good stuff. I’ve made this one as per the recipe before and always found it soft and scoop-able. The only change I made today was to add 2 T. homemade blackberry liqueur. 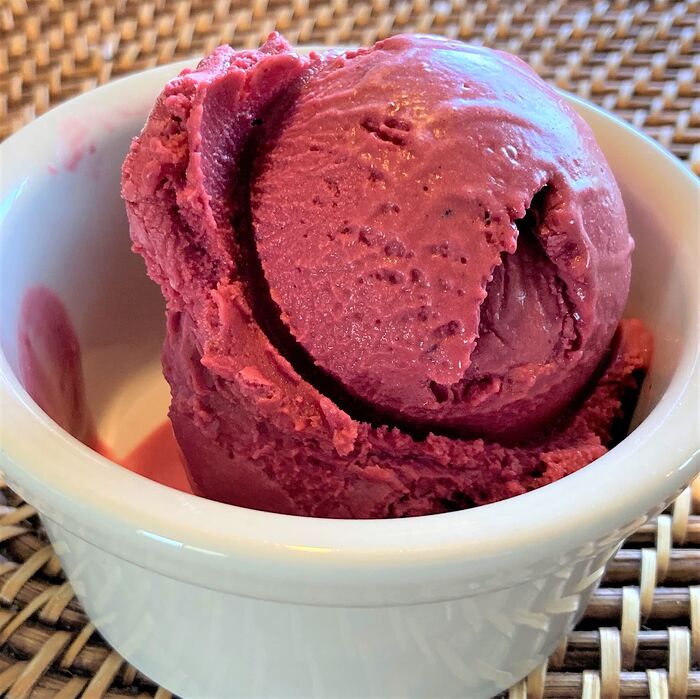 Here to say I had another friend ask for and make @MunchkinRedux 's peach frozen yogurt/ice cream recipe, then let me know she LOVED it, 10/10

@mig - What was your verdict on how long the mixture stayed in the fridge? Which one did you prefer? Thank you! I have a ton of peaches!

Curious: what were the differences you noticed between the shorter and longer rests?

talked about it here

thanks @mig! I don’t think that you ever updated if you had a preference, taste-wise - would love to know! Ah, just saw that you prefer longer rest - thanks! Off to find peach brandy - thank you @MunchkinRedux !

I went looking for Peach Brandy today, started at Total Wine since it was Nextdoor to Bed, Bath & Beyond … had to get a new mop. They were supposed to have a $10 bottle of “Harrington” but not on shelf. In the car I called BevMo; they had an E & J one for $10.

So, I’m on my way to peach sorbet, will get the peaches Sunday at farmers market!

The perfect ice cream treat (purchased at a local dairy that makes their own ice cream): local ice cream sandwiched in special 3” Oreo wafers. I keep trying to buy the wafers so I can make these myself, but they are only sold in wholesale-sized boxes 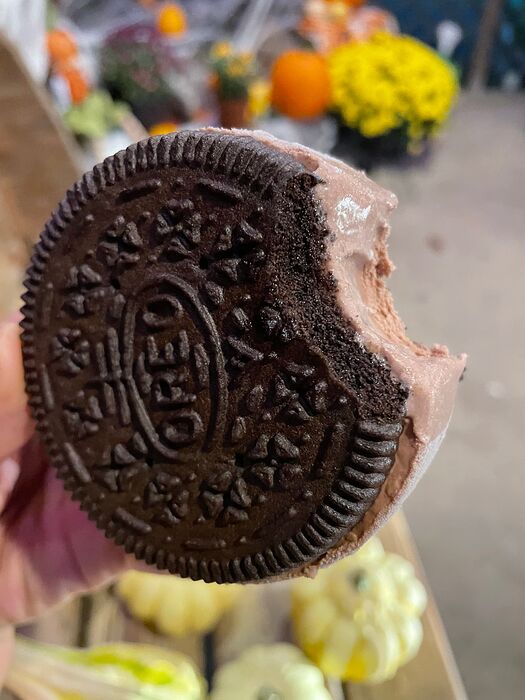 There are several recipes for homemade Oreos online. 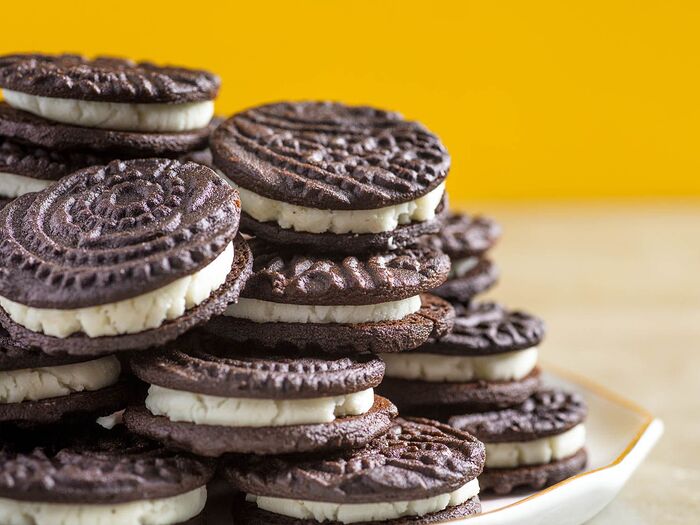 You don't have to hunt down specialty "black" cocoa to make authentic Oreos; the only essentials are Dutch cocoa powder and a little baking soda to alkalinize the dough. Together, they make crispy wafers as inky and intense as the original, with a... 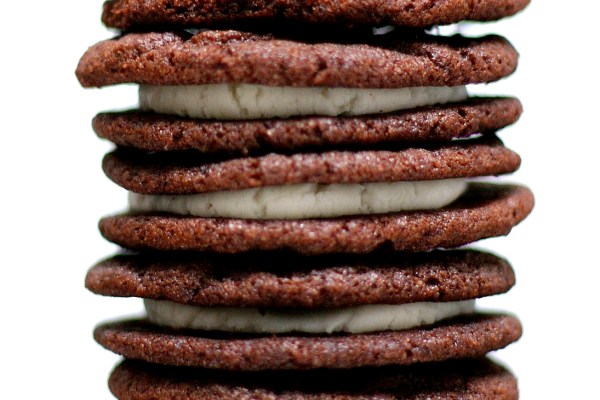 Just before I left for the airport Monday morning, I stopped short and ran back inside, not because I forgot my power cord or business cards or anything normal like that, but to make myself a turke… 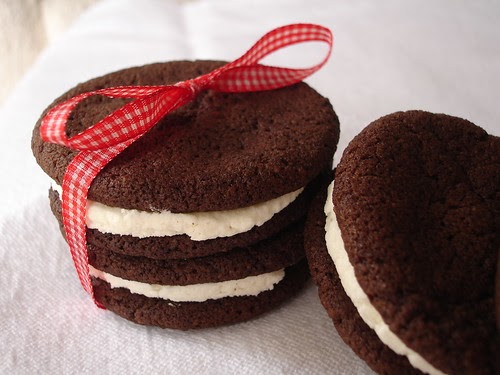 There are certain things that we know are great way before we even see/hear them. Take Kanye West, for instance; I knew who he was (after...

My visit to Bouchon Bakery last year was one to remember and every now and then I think of the delicious treats I had there. However, I n...

So, how long should mixture rest in fridge?

What kind of yogurt should I buy?

Peel or not peel the peaches?