Help! Pig's trotters, what to do with them?

Mr. n bought some pig feet home. No idea at all how to cook them, and how to prepare them!

I guess not a lot of people eat them in restaurants, not to say prepare them at home…
Any ideas? Thanks so much.

I’ve eaten them but have never cooked them at home. I googled and found a slew of recipes. Good luck however you prepare that part of the pig. Let us know please how you cooked them & if they turned out.

If you are up for a spiced preparation, look for “paya” recipes - typical of south Asian Muslim cuisines, but with goat or beef. Produces a rich, gelatinous soup.

I’ve always wanted to eat this. Looks very complicated and very time consuming though. I don’t think I would attempt to make it. 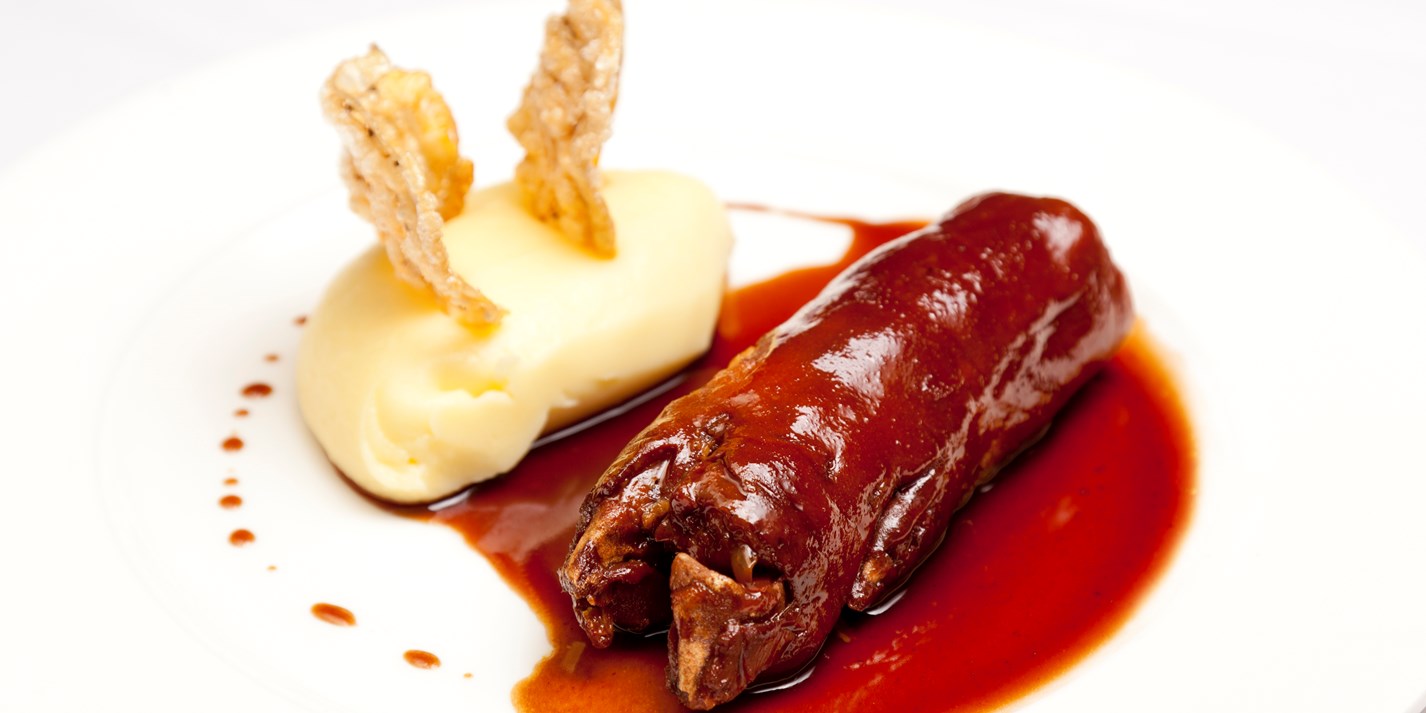 Pierre Koffmann's stuffed pig's trotter recipe is a true classic, one of the French master's signature dishes from his days at La Tante Claire, where he held three Michelin stars. Pierre serves the dish with crispy pig's skin and pomme purée, made...

The recipes look interesting. But need some time and some extra ingredient like pig skin. Bookmarked this for future, when I will be more at ease with the trotter.

For the time being, I do have Irish Crubeens in mind.

Thanks! These looks wonderful with lamb and goat, I don’t think I see them on sale, maybe need to special order.

I wonder how to chop, from the photo looks neat and clean, I don’t know if I have that chopping skill or the force! 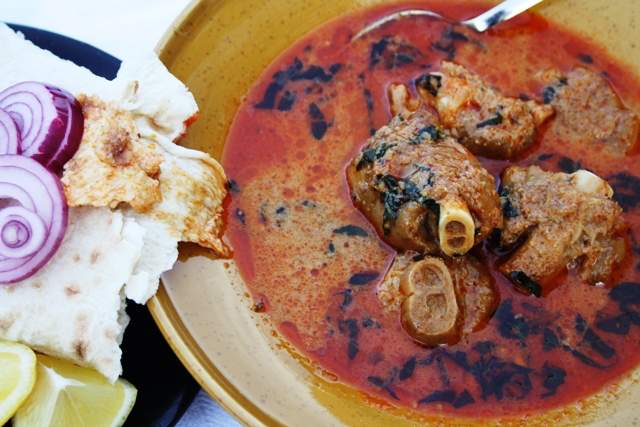 This is a possibility too, feet on grill. 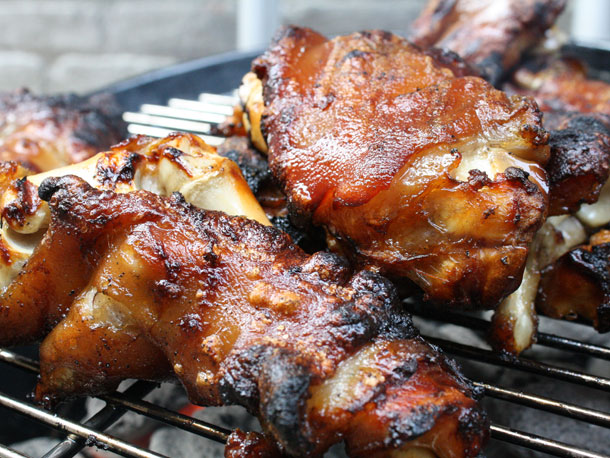 A stab, on the other hand, registers instant shock and pain. The moment the tip of the knife went into my hand, in the tender area between the thumb and the rest of the hand, blood started gushing at the point of entry. It made my stomach turn to see...

I’ve too eaten them as a cold dish, with shallot, garlic and parsley, well, the French style. 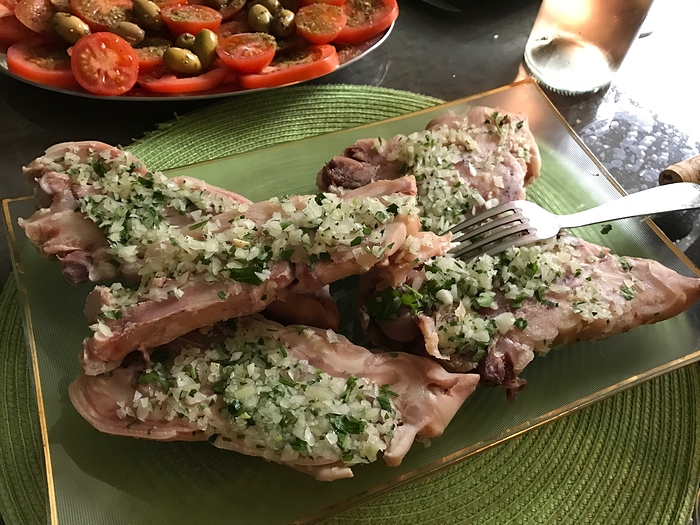 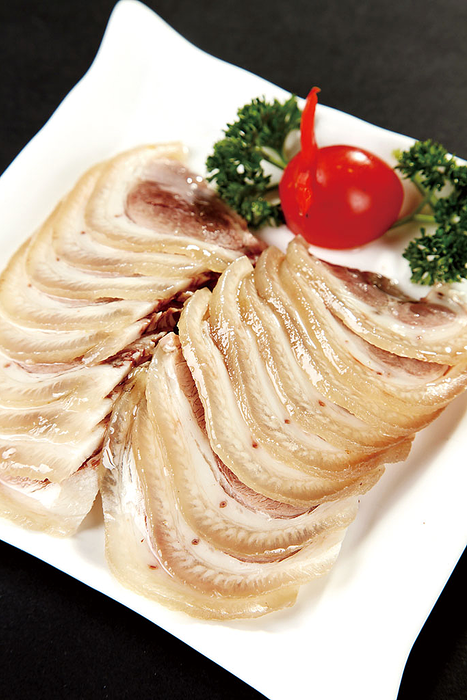 For the time being, I do have Irish Crubeens in mind.

I’ve only eaten trotters once. That was as crubeens - at Richard Corrigan’s now closed restaurant in Soho, London. Never cooked them at home.

Here’s a link to Corrigan’s recipe but I suspect you will find simpler recipes online - http://beebrecipes.co.uk/recipe/crubeenspigstrotters_86182

Here’s a link to Corrigan’s recipe but I suspect you will find simpler recipes online - http://beebrecipes.co.uk/recipe/crubeenspigstrotters_86182

Thanks, indeed quite labour intensive and need days of preparation. Also need an extra ham hock.

If I make this recipe, I will need more trotters, right now I have only 2.

naf, pig’s feet and part of the leg are a Chinese delicacy
Matchmaking was still a custom when I was home , I left 1964.
Matchmaker would say" I want some pig’s feet if I match your daughter with a prospective groom"
They are sold in cans in the Philippines and they are used whenever there is an engagement , , pig’s feet in cases are offered to the bride by the groom as well as to the matchmaker .
They are great served with rice, wrapped with sticky rice ( together with chestnut and mushroom) or with rice noodle.
the ones in the can were really good, but expensive. They are offered by the dozens depending on how wealthy the groom is and how well the match was made.
I remember that they had already fallen off the bones ( no bones in the can) and full of gel.
Here is a recipe, scroll down to the bottom. If my mother cooks them, she would also follow the same recipe using pressure cooker and then braising them. Mom adds chinese dehydrated mushroom as well as tiger lily buds to them ( tied in knots) towards the last part of braising. The gravy should come out rather thick and jellied.
Let me know if y ou attempt to do this. Really worth the effort. 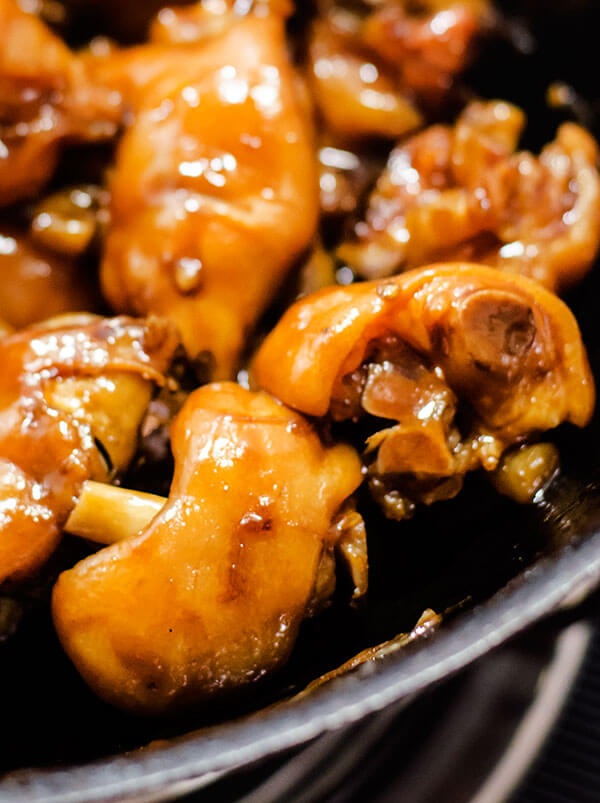 Braised pork feet is a very popular snack in Chinese cuisine. The finished pork will be tender, flavorful and not greasy at all.

We cook pig’s trotter at home every month or so. Simply slow boiled with peanuts, shiitake, ginger and maybe a bit of Chinese herbs. And a glug or few of Shaoshing Wine.

The soup is rich and comforting and must be good for nails, hair and skin. It sets solid after cooling overnight.

Flipping through my photos, it becomes apparent that we like this humble part of the Pig. 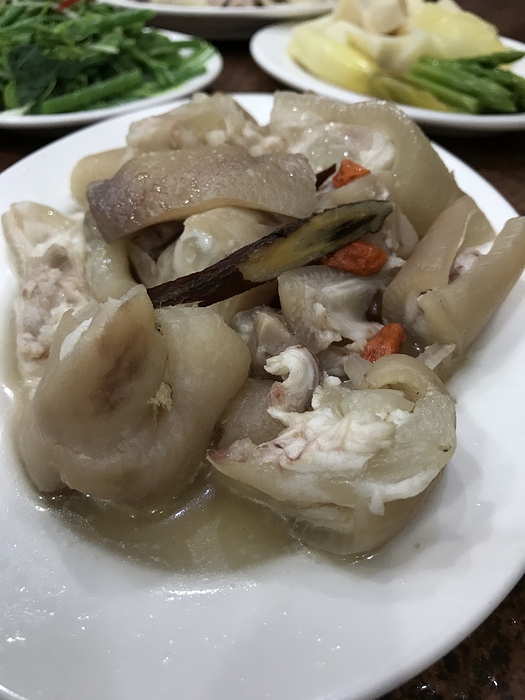 Roasted? Barbecued? Not sure: 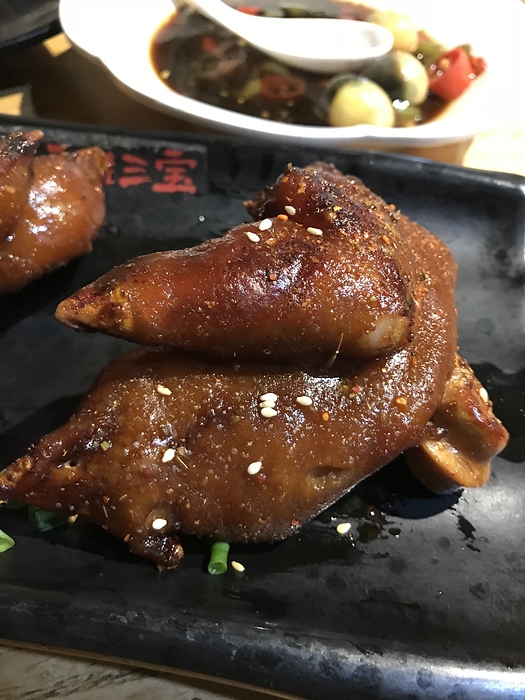 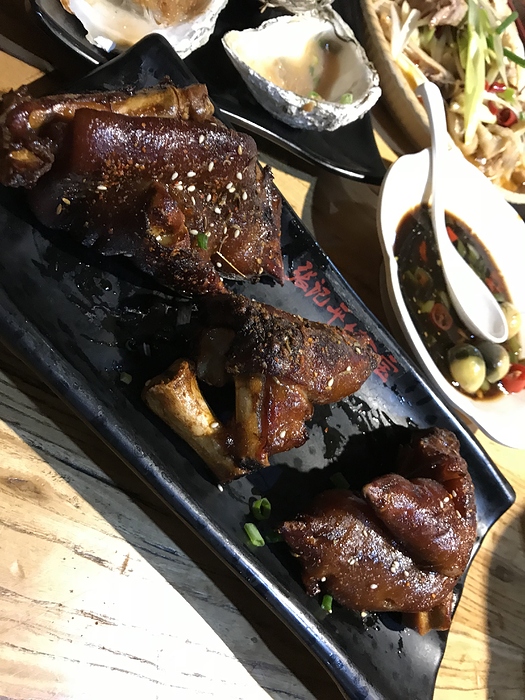 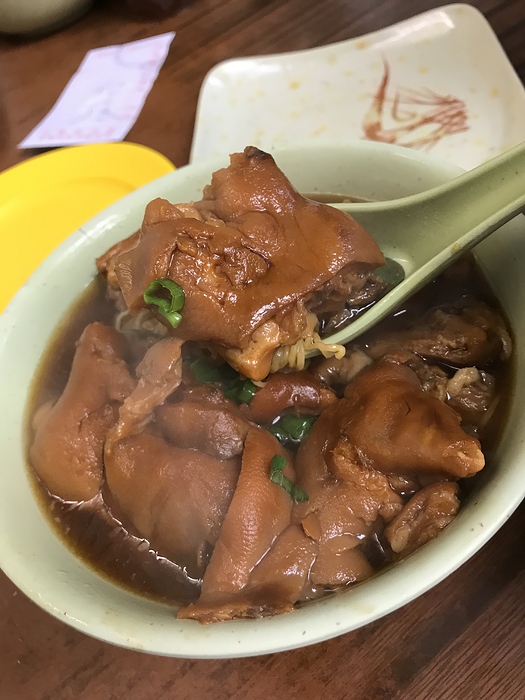 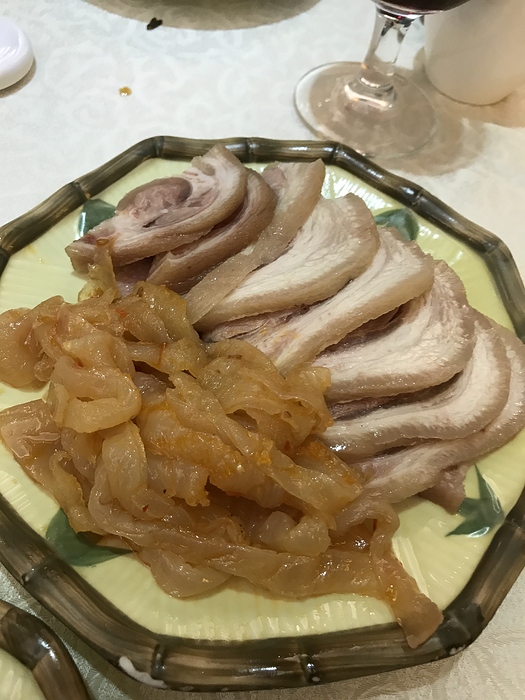 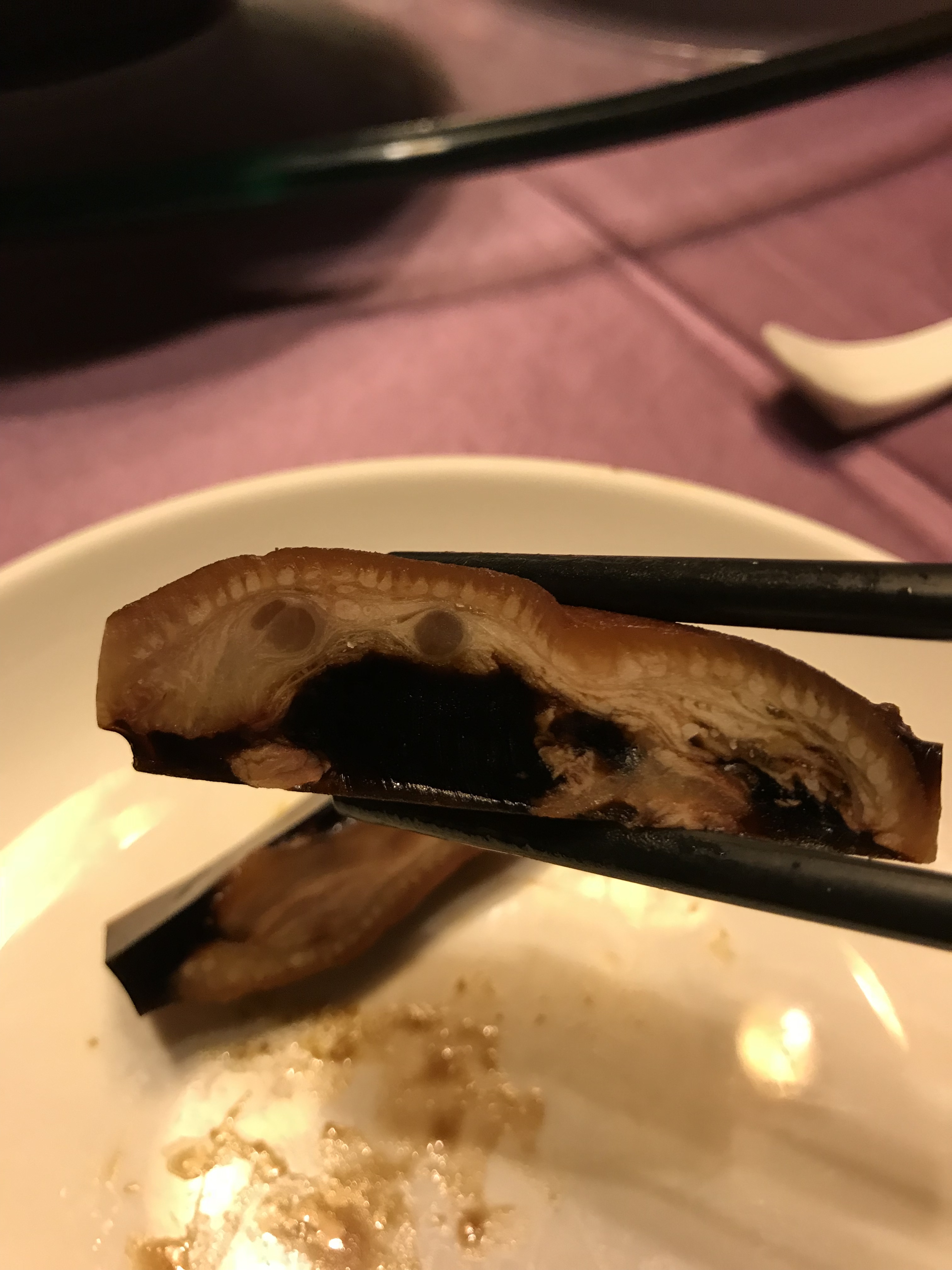 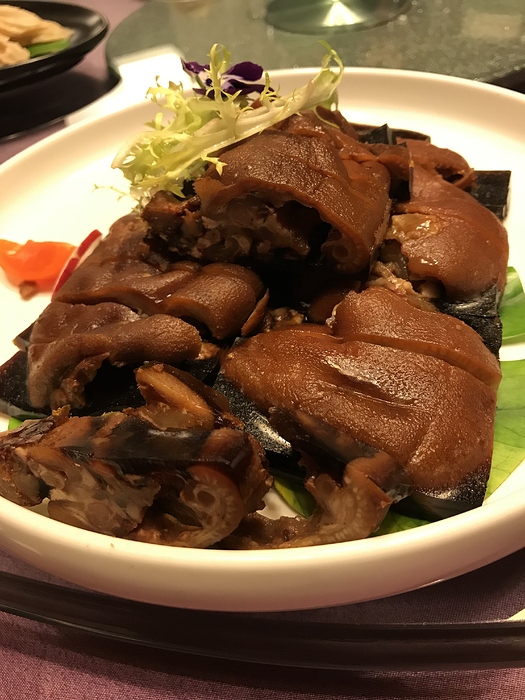 Will be in Taipei Wednesday. I see more of the same in my future.

I meant I’m sure they would work on pigs trotters if you want to try them, but the recipes are Muslim in origin so they are written for goat or beef.

I was going to mention the Serious Eats- “Nasty Bits” recipe, although I’ve not tried it.

My family ate them when I was a child, although I can’t remember if I did. I think it was called “souse”.

Notice the “chadon beni” or cilantro we talked about in another thread.

Looking forward to you sharing something better than I remember!

If all inspiration fails, I think I’ve read bunging one into a batch of stock is a sure way to boost body / gelatine.

I ate the Koffman dish at his restaurant that closed a few years ago, it was delicious but definitely too much effort for home.

was supposed to"chadon beni or CUlantro.

I love pig’s feet! If you like Vietnamese noodles, I’ve tried making bun bo hue which uses pig trotters as one of the many toppings and proteins in the noodle dish (including pig’s blood, banana flower, and lots of herbs). It’s a lot of ingredients, but often can be found in the Asian markets. You just need the patience to bring out the flavor in the soup and to cook the pigs feet until softened enough for eating.

My mom also likes to braise pigs feet with the red fermented bean curd ( 南乳). Sometimes she puts lotus roots in there too, but it’s only if you want something else besides the trotters. It’s similar to this dish below, but without the peanuts.

My family ate them when I was a child, although I can’t remember if I did. I think it was called “souse”.

That was the second dish I thought of. My first thought was feijoada: 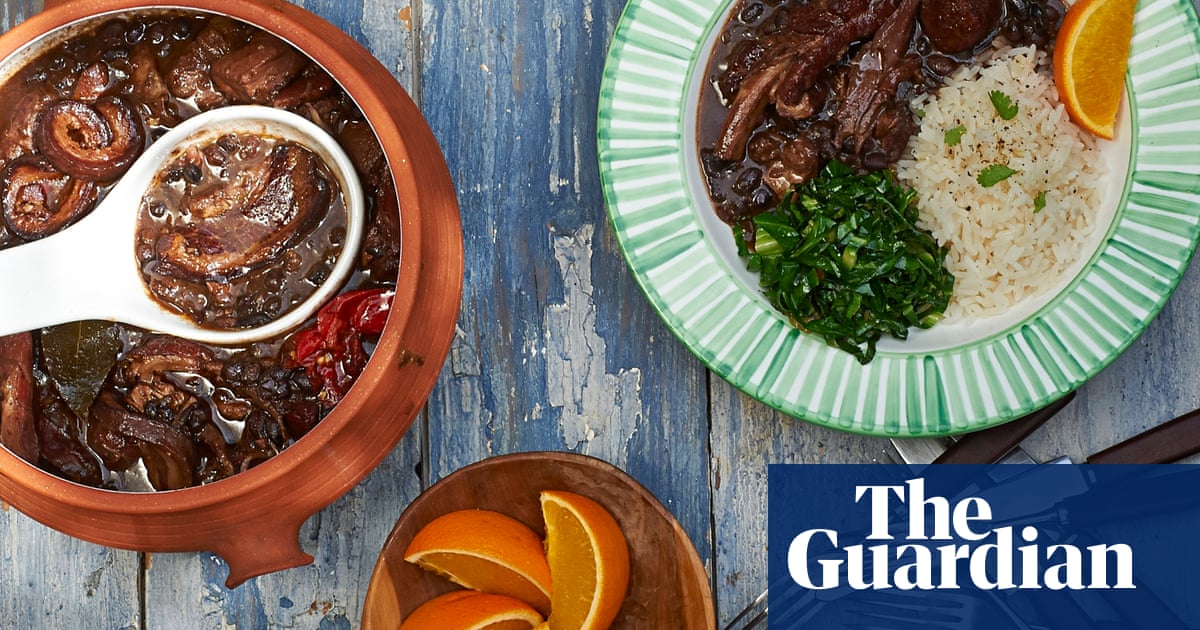 A one-pot Brazilian feijoada fit for any celebration

Feasting: A symphony of black beans and comforting spices, Brazilian feijoada is anything but a lacklustre stew. Impress friends in one fuss-free pot with this celebratory feast 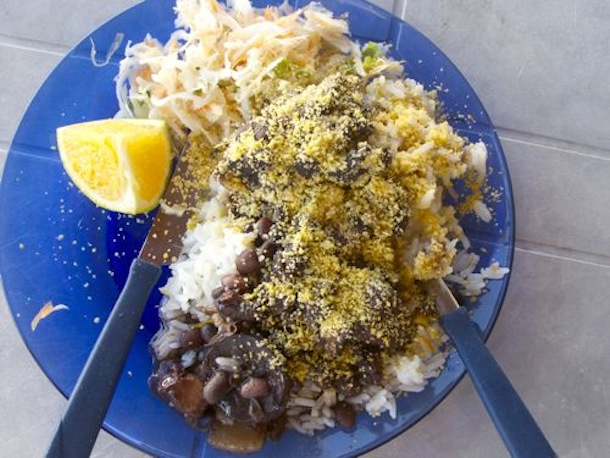 Note: For best results, use as many different salted pork parts as available, though you can always make it with just a few. Straight up salt pork and slab bacon with some good sausage will be quite delicious. Farofa is...

For once Kenji has the simpler prepartion:) Takes a while but it’s not hard to make at all. One of my best friends is Brazilian and this is her go-to party pleaser (of course, she has her OWN version, which I am honor-bound not to share:)

Thanks everybody for help, so many ideas.

My first trotters, I’ve used @ccj’s recipe since I had all the ingredients at home without further shopping and the recipe only need 2 trotters. Also Mr n requested Chinese food this week.

I added much more ingredients like dark soy sauce, salt, as I used a bigger pot with more water. In addition, I added some black vinegar. The meat was melting in mouth with the gelatine. Despite the strong cooking liquid, the seasoning of the pork was just right. Really good. Will make it again, with more feet of course. 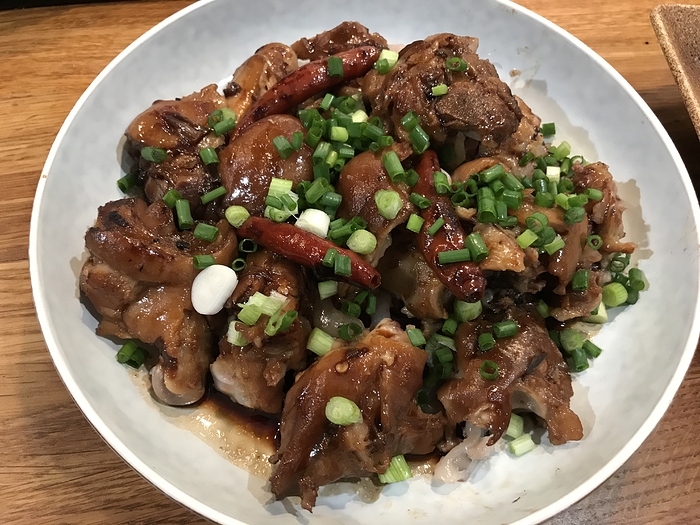