Huangcheng Noodle House has recently opened in Oakland Chinatown at the corner of Webster and 7th. From the yelp comments and my experience walking in the open door that said “Open” only to be told by employees eating in the corner they were not open it seems like they are still working out some issues, such as if they have noodles as advertised in their name.
I could only see some pictures behind the counter, but it seems to be a Sichuan restaurant. 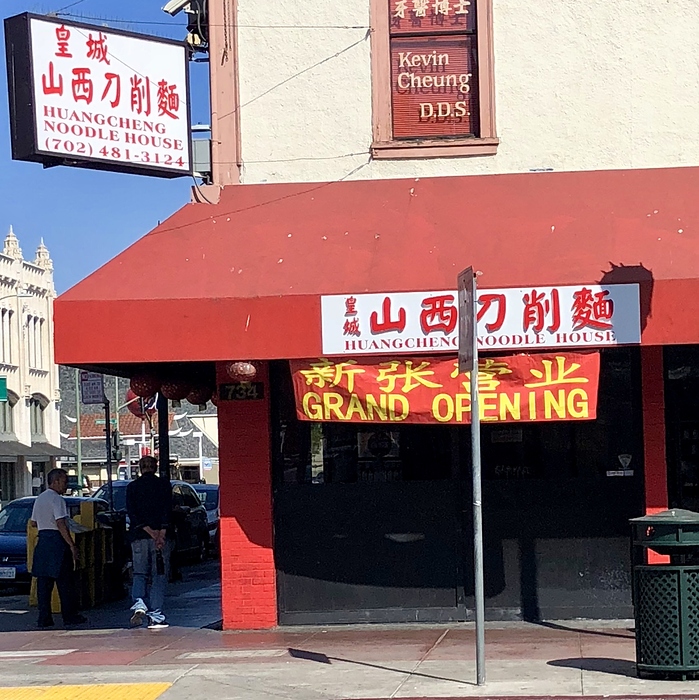 I stopped in for a quick meal tonight. Signs for dishes like toothpick lamb and big plate chicken are vestiges of the short-lived former restaurant, Nan Cafe, but are not served.

I had a chat with the chef, Jimmy, a Chengdu native who has been a chef for decades in Las Vegas. He said that the owner, who is from Shanxi, has restaurants in the South Bay. It appears that this is a Sichuan-focussed extension of the local Xiang Xiang chain (Cupertino, Sunnyvale, El Sobrante), which all specialize in knife shaved noodles , but seem to focus the menus based on the chef’s expertise.

Pao cai, often described as Sichuan kimchi, is self-serve at the counter and was brightened with pickled chilies. 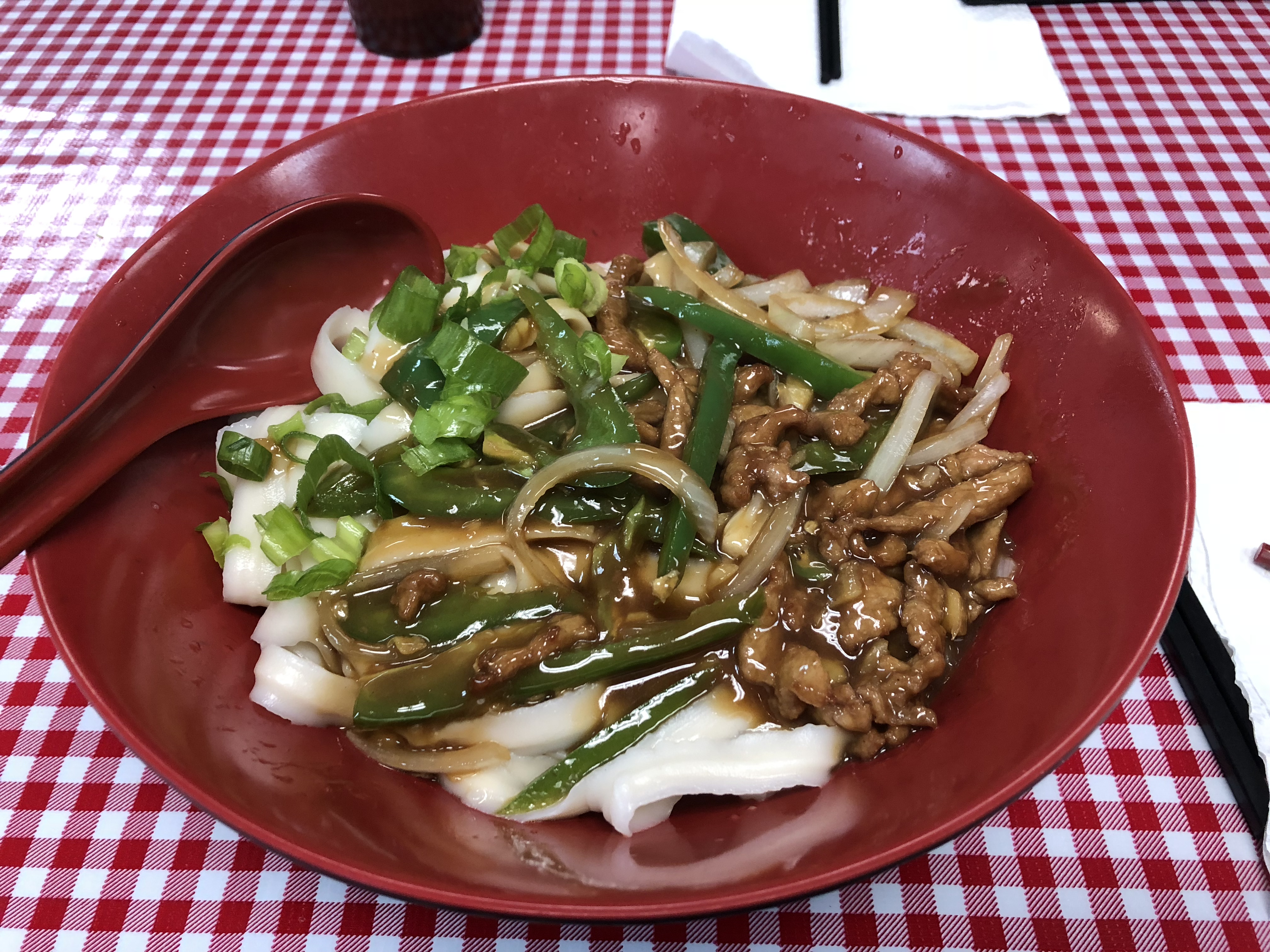 The knife shaved noodles were nice and chewy and the pork and green pepper sauce/gravy I got had a mild kick. The 1 cm wide long noodles, flat on one side with a convex channel on the other, had fluted edges which are the signature of the cutting device and helped wick up sauces. 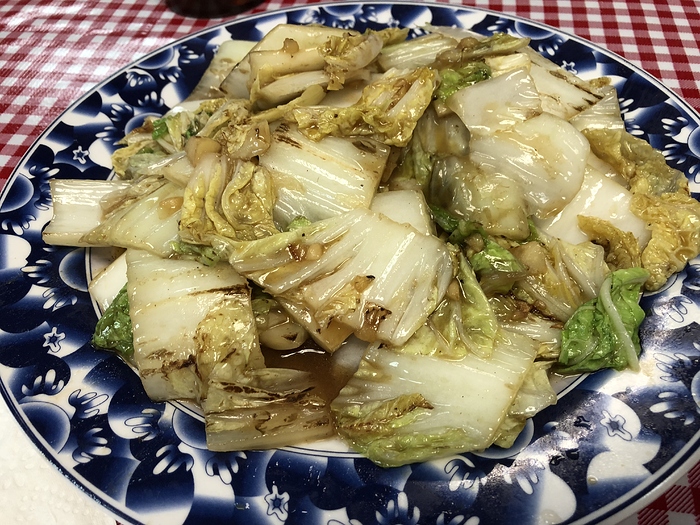 Also good was the charred cabbage, which got lots of flavor from all those BTUs in the kitchen, and was seasoned with black vinegar. This version emphasizes savory and acidity and does not use charred chilies. I liked the chili oil sauce on a gizzard appetizer, but found some pieces to be too dried out.

The chef said his favorite dishes are the Cold chicken with chili sauce (a name he prefers to “mouth watering chicken”) and the boiled sliced fish in hot sauce (AKA water boiled fish). If you’re on a Chongqing Xiao Mian kick, try his version and let us know what you think—- his is the only version I know of that uses knife shaved noodles.

Incidentally, Freezing Point Ice cream is pretty close by and has interesting flavors like wasabi; or chrysanthemum, which deserves a place in the canon of Asian ice cream. Unfortunately very icy stuff, but the upshot for me was that a scoop stayed cool enough to survive the trip home to SF for some TV watching.

Went tonight. The place was almost empty at 7:30 PM on a Thursday. Both waitresses were very friendly, though one of them did not speak any English. The other waitress spoke English quite well though, and she suggested the Chongqing Street Noodle (after I told her I wanted to eat dao xiao mian). The picture of the Chongqing Street Noodles on the menu doesn’t use the dao xiao mian (knife shaved noodles) but she assured me that our version would.

We also ordered knife shaved noodles with the pork/eggplant sauce, and an appetizer of cold bean curd skin w/ celery.

We were served hot tea, and later water when we requested it.

First food to come out was some pao cai (Sichuan kimchi). I didn’t personally love their version since it tasted sort of like packaged chili sauce. But it was not bad, and they told us we were welcome to request more.

Next was the cold dish. It was good, though a tad salty, and it wasn’t super super fresh (it had been in the fridge), but overall I liked it, especially with a bit of chili and black vinegar added. The chili on the table was quite good, and I think homemade?

The two noodle dishes came out next, and these were very good. In fact, I’d say the Chongqing Street Noodles were fantastic. Definitely reminded me of the type of noodle soup that I ate in China. Broth wasn’t overly salty, and despite its appearance, wasn’t very spicy (I’d call it mild to medium). It had lots of toasted chili and garlic, bok choi, peanuts, scallions, sesame seeds, ground meat, sichuan peppercorn and of course the EXCELLENT knife shaved noodles. I think this is definitely the dish to order here.

The noodles with eggplant and pork were also good, though the sauce was a tad oily for me and didn’t have a super strong flavor. It actually benefitted from a little bit of chili since it was completely mild. Noodles again were good and served very hot.

Total bill was about $26 before tip for a LOT of food. Good value and nice folks, with some very different food than what’s offered elsewhere in Oakland right now. Go check it out!

Thanks hyperbowler for the tip!
Dave (aka Vamped) 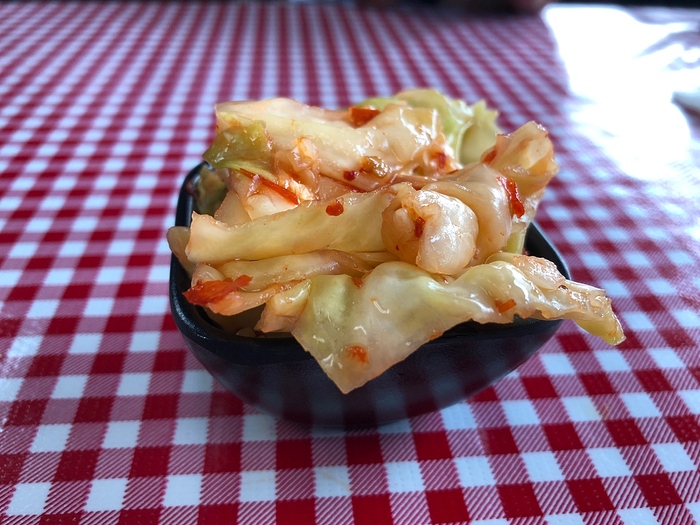 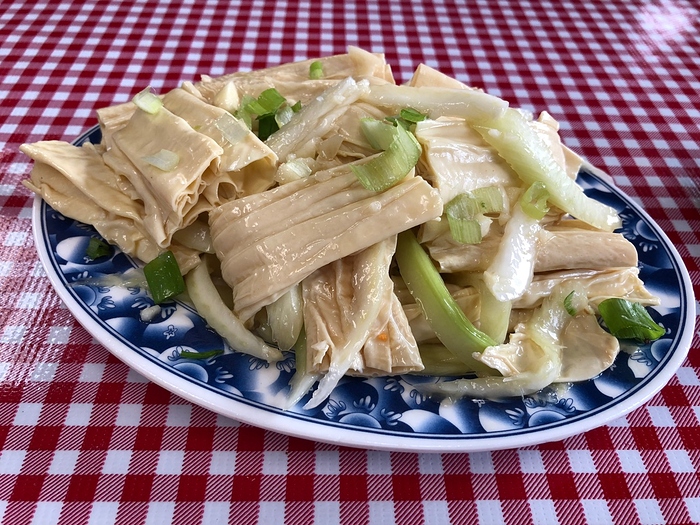 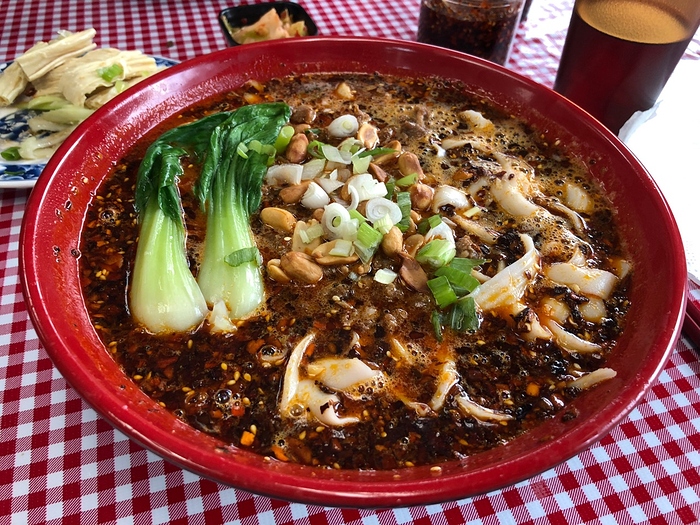 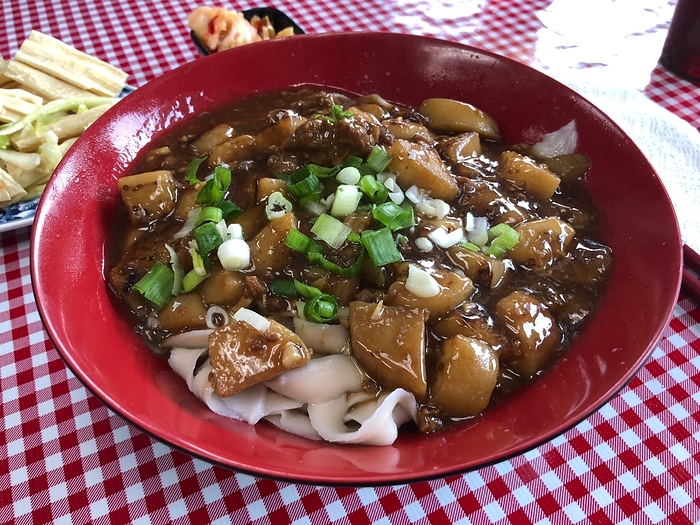 Based on the recommendations in this thread and having eaten at Nan Cafe and at several of the dim sum takeout shops that have been on that corner over the last couple of decades, I couldn’t resist a solo lunch there this afternoon.

At about noon, there were 15 - 18 patrons using most of the tables and it seemed like a knowledgeable crowd in that I got the impression that they mostly were familiar with the cuisine and knew what they wanted.

A seat next to the west windows, the first one on the right as you enter the front door, gave a panoramic view of foot traffic along 8th Street, Webster Street and the pedestrian traffic in the crosswalk scramble that crisscrosses the intersection.

I have no complaints about the service. A menu, hot tea in a plastic cup and instructions for the self-serve kimchi bar were presented quickly. The server spoke English and explained that the Chongqing Noodles ($8.89 plus tax) had certain differences from the photo in the menu. A huge noodle bowl arrived 10 or 15 minutes later.

The broth was rich with a milkiness that I liked but couldn’t place: soy or the noodles? The peppers and the ground meat tasted as if they had been roasted and that smokiness along with the milky broth was, I thought , remarkable and new to me.

I didn’t see the style of peppercorns like those in the boiled fish in chili oil at Z&Y in San Francisco but instead toasted flakes that didn’t have the burning bite of Z&Y but rather a more herbal taste with a long finish.

The noodles did have an irregular edge but were a tad off in the chewiness department compared to the hand-shaved round Shanghai noodles I remember from Shan Dong in Oakland. Maybe they missed a bit in the cooking time or I need some more noodle education.

There was so much in the bowl that I struggled to finish it. A pretty impressive lunch.

I wish I had stopped by after these posts that show the Chongqing Street Noodle is actually served with the knife shaved noodles rather than the typical thin noodles.
The waitress was very friendly but not terribly helpful with suggestions when it came to what noodle dish I should try. I ended up choosing the twice-cooked pork with noodle, as mentioned, most of their menu tends toward Sichuan dishes. While I wasn’t terribly impressed by the gloopy bell-pepper laden topping that showed up on my noodles rather than the typical Sichuan prep of leeks and boiled pork belly refried with doubanjiang, it actually made a fairly tasty combo when plenty of the table oil-roasted chilies were added. The noodles themselves had a slightly softer texture than I prefer, and were very uniform in shape, which I imagine comes from shaving with a small, tightly curved device, like this 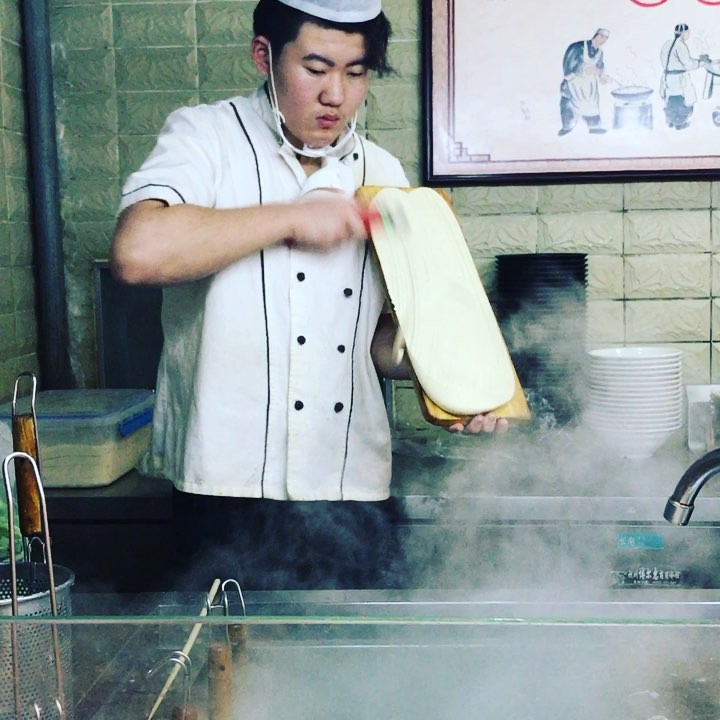 45 Likes, 2 Comments - Wayne Hou (@waynehou) on Instagram: “You could say I’m sorta the boss so get lost #handshavednoodles #handcut #knifeshavednoodles…”

rather than a larger, slightly curved blade that produces greater variety in sizes like this:


In any case, when I go back, I’ll likely order one of the stir-fried noodle dishes, as I prefer that to maintain a bit firmer texture for the noodle.
I will be back–I’m surprised that Oakland Chinatown hasn’t really seen any of the boom in Oakland restaurants that seems to have happened in the last several years. It is still, nearly exclusively, value-oriented Cantonese places. Decent places trying something else, like Chilli Padi and Nan Cafe have come and gone and stalwarts like Chef Lau’s have closed down. 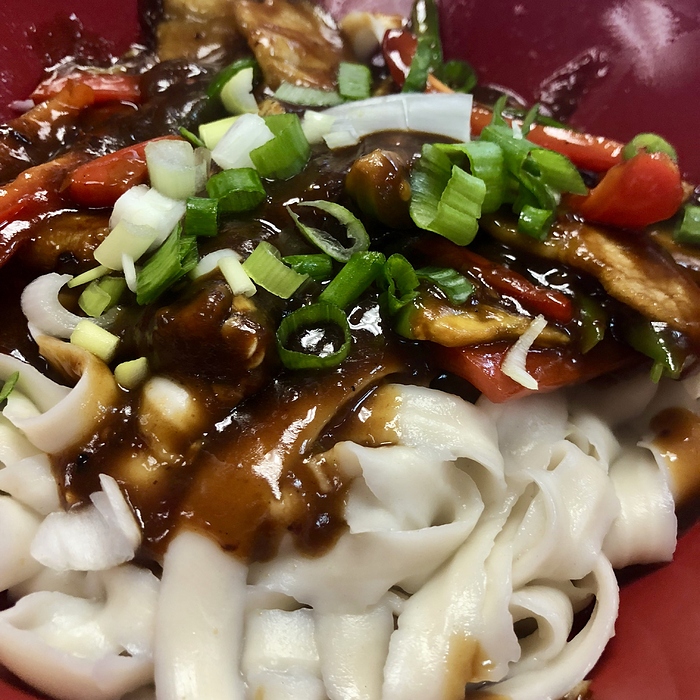 I will be back–I’m surprised that Oakland Chinatown hasn’t really seen any of the boom in Oakland restaurants that seems to have happened in the last several years. It is still, nearly exclusively, value-oriented Cantonese places. Decent places trying something else, like Chilli Padi and Nan Cafe have come and gone and stalwarts like Chef Lau’s have closed down.

I can’t tell what’s going on in Oakland Chinatown which I love because it’s compact, not touristy and easily accessible by bus from where I live a few miles away.

Chef Lau’s at Harrison and Eighth St., a favorite of Luke Tsai’s, was undergoing repairs to the foundation but has been empty for a few years now. Chilli Padi Malaysian has turned into another hot pot place. Pho Hoa Lao on 10th Street across from Shan Dong has been empty for a year or so. New Idea Restaurant with cheap dim sum on 9th Street across from the Pacific Renaissance Plaza has been empty for maybe 2 years. Fortune Restaurant at the southeast corner of Webster and 10th St is empty. I believe that Peony on the 2nd floor of the Pacific Renaissance Plaza changed hands but I haven’t looked into whether there are changes to the menu.

Luke wrote an article in the East Bay Express some time ago about the impending redevelopment of Oakland Chinatown but I just haven’t seen it so far.

There’s a lot of potential in the area, I think. 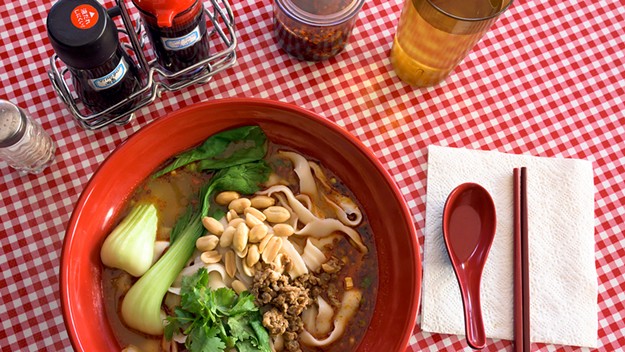 At the new Oakland Chinatown restaurant, enjoy traditional Shanxi-style knife-shaved noodles made by a third-generation noodle-maker.

Based on a recommendation from hyper bowler after our lackluster meal at Shandong we gave Huangcheng noodles a try last night. We loved it and wished it was busier than it was, especially compared to the overflowing crowds at mediocre Shandong close by. Our waitress was incredibly nice and helpful and chatted with us about the food when she saw how much we were enjoying our meal. Here is what we ate:

We really liked the complimentary house made kimchi.

Cold chicken with chili sauce. A refreshing take on this dish which is often very oily. The chicken was flavorful and moist and the sauce was redolent with Sichuan pepper. Big cubes of cucumber were delicious with the sauce as well. We loved it. 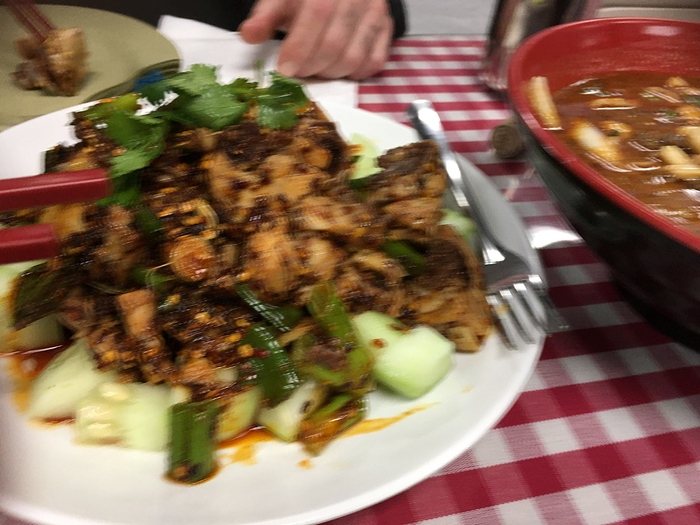 Sour and hot Sweet potato noodle soup. The last time we had this dish was at a restaurant that specializes in SLB in Shanghai. The version at Huangcheng was every bit as good if not better. The broth was perfectly balanced - rich, sour, spicy, numbing and umami - and paired perfectly with the slippery noodles. One of the most memorable dishes I have had in a while. 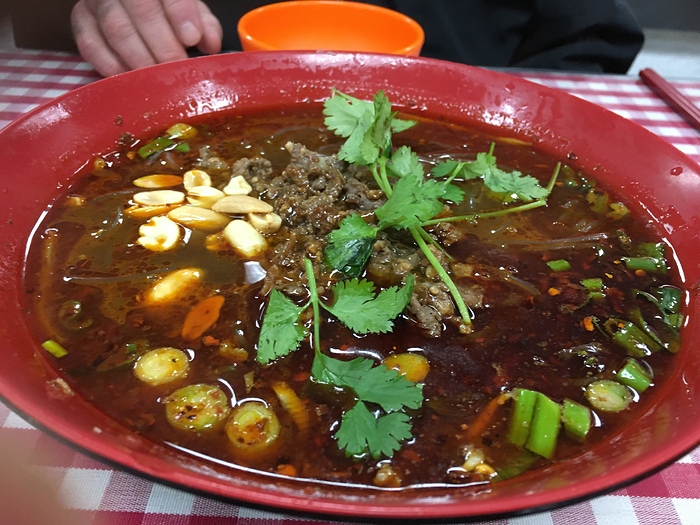 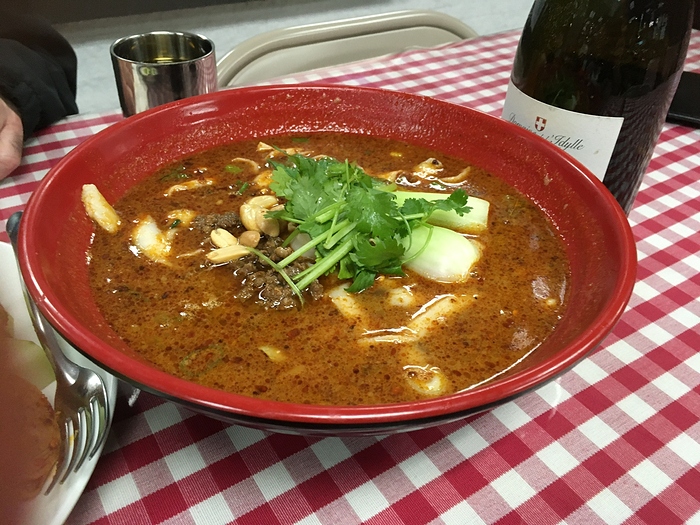 We will definitely be back and highly recommend this place.