@drrayeye I’ve done the same and purchased mine @ an Italian Pasta Shop.
I’m game to try to make it from scratch this quarter.
However mine won’t be nearly as beautiful as @MelMM’s.

Thanks for juggling the nominations/voting @biondanonima. Now if I can only find that (as yet unused) gnocchi board I ordered years ago when I thought I’d try homemade pasta-making. Looking forward to an interesting quarter.

I made gnudi for lunch today. I used Nancy Silverton’s recipe from her Mozza cookbook that I found online as I have her Mozza at Mom but not the original. My gnudi held together and were light and fluffy even though I didn’t roll them into a ball and left them as cylinders. And surprisingly rich. I think I need a little tomato sauce to cut through the richness of the pesto cream sauce I served it with. I might whip up the Marcella Hazan’s tomato sauce with onion and butter for the second half of the leftovers.

I made half a recipe of the gnudi and I could only eat a quarter of that. And not to be too picky, I think I prefer gnocchi to gnudi. The potatoes in gnocchi are more flavorful to me than the ricotta in gnudi. But that is just a personal preference.

The Silverton recipe uses a mushroom sauce and maybe the next time I make a batch, I might just do that. I love sautéed mushrooms in ALL THE THINGS. These tender ricotta gnudi from Nancy Silverton are like ravioli without the wrappers. They're delicious with the buttery thyme-scented chanterelles. 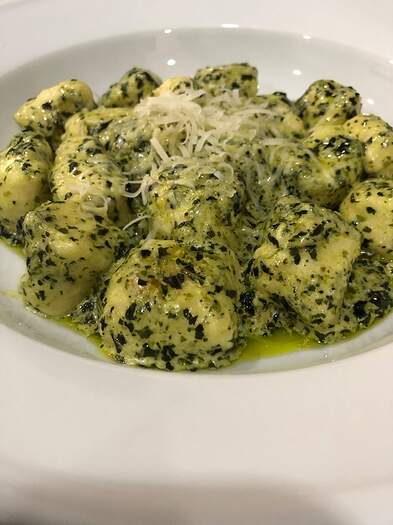 GNUDI WITH PORCINI
I do a lot of “projects,” but I have just never gotten into gnocchi–perhaps because I tried gnudi first, and they are just so fun and easy.
I had purchased some porcini powder from my mushroom purveyor and wanted to see how I could use it to amp up the mushroom flavor in a pasta. She also had fresh porcini this week, but one can never have too much porcini. I loosely followed the April Bloomfield recipe via https://www.seriouseats.com/spotted-pig-ricotta-gnudi-food-lab
These were the lightest, fluffiest gnudi I have made yet!
Changes:
I did not remove the excess ricotta and weigh to 12 ounces.
I added about a tablespoon of porcini powder to the ricotta.
I only had a couple cups of semolina, so I used that for the “dredging” part of the recipe, and I used pasta flour for the initial dip, adding a bit more porcini powder to the pasta flour.
I did not freeze this but cooked the same evening; they held together fine.
This recipe was an inspiration: https://www.italianfoodforever.com/2008/08/mushroom-gnocchi-with-sauteed-spinach-and-mushroom-topping/
As I made the gnudi, I sauteed the fresh porcini and a clove of garlic in olive oil and butter. I added a box of baby spinach and a splash of white wine. The gnudi and some of the cooking water went in, voila! This made three portions, and I’ll have the leftover gnudi with sage and butter for lunch.
I can’t believe how little flour it took for these. I think the mushroom powder possibly has a slight binding effect also. The only thing I would change is perhaps add more porcini to the flour, as the color might end up more attractive that way. 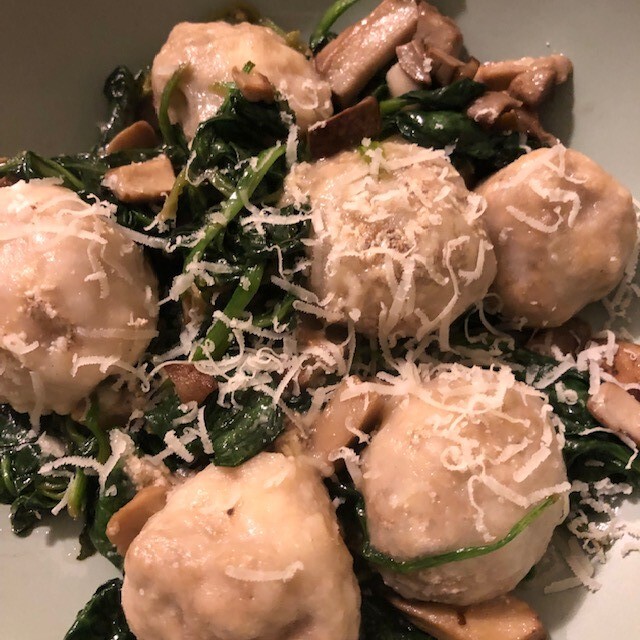 I have feta on hand , decided to see what feta gnudi recipes are online 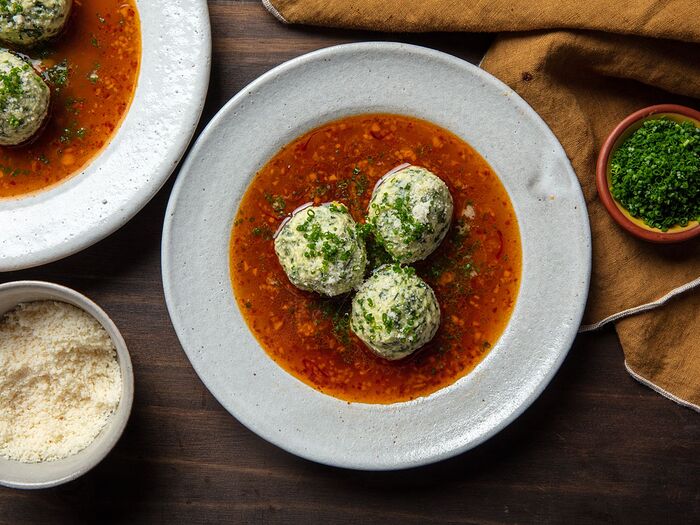 Creamy ricotta and feta dumplings with spinach served in a warm mushroom and saffron broth. 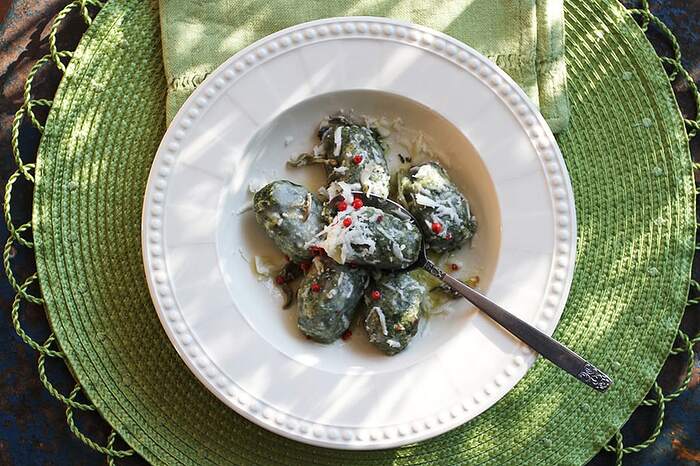 Spanakopita Gnudi Here is a hybrid Greek recipe with a few Italian influences! Spanakopita, an all-time classic Greek recipe, is the inspiration for this dish, but transformed into something entirely different, buoyant gnudi, in

Haven’t made any feta gnudi yet.

Those look gorgeous! Thrilled to hear that the recipe worked well for you - I need to get off my butt and try it!

Those look and sound amazing!!

Once you get the hang of it, forming these dumplings is easy, and you might never stop.

A sushi mat is a fine substitute for gnocchi board or tools Just roll the gnocchi down the canes, from cording, to next cording, which will kind of pop them off. Works a charm. 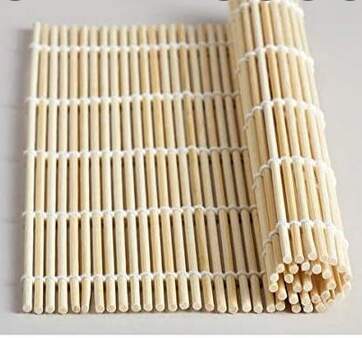 I have a filling I have made for ravioli that involves boiling turnips and cashews, and blending to make a ricotta-like mixture. I flavor this with some vegan blue cheese, and the combination is just fantastic. A friend gave me a ton of turnips, so I made a large batch of this filling. I first used it in stuffed shells. Then I decided with the leftover filling to experiment with gnudi and gnocchi. For the gnudi, I added a mix of sweet rice flour and potato starch until the mixture was solid enough that I could roll into balls. I then boiled them, then pan-fried with some sorrel/pistachio pesto. The pesto kind of formed a crust on them, so more fresh pesto went on at the end to garnish. They were served over a beet/carrot/tomato sauce, which is based on a soup from Gjelina.

Later I used the remaining mixture to make gnocchi. Same mix of flours as for the gnudi, but a bit more to get a dough I could roll and shape. These were served with a simple homemade tomato sauce.

Both versions worked well and were delicious. It was kind of liberating to find I could make gnudi and gnocchi from improvised and non-traditional ingredients. 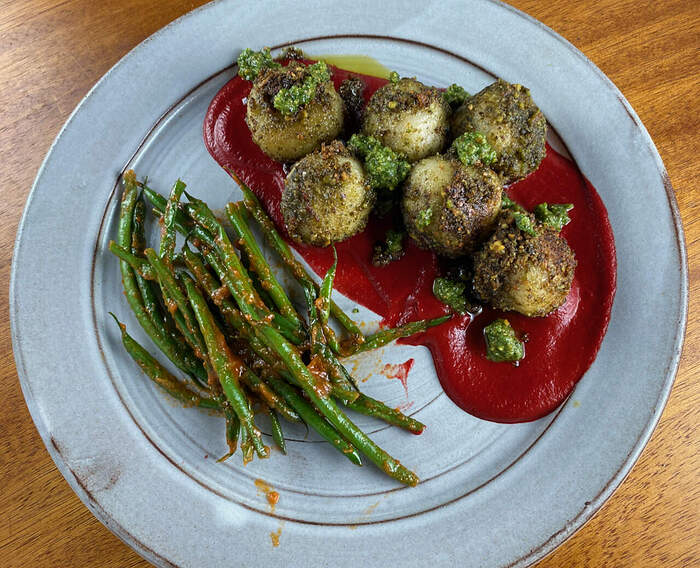 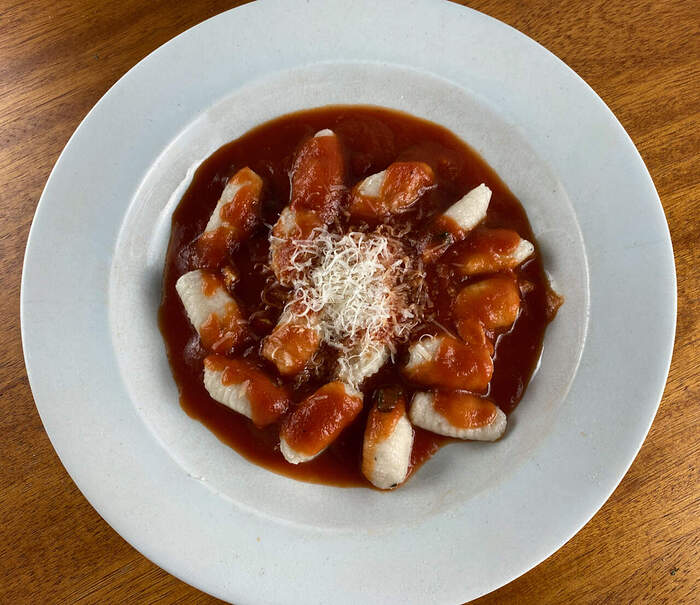 It was kind of liberating to find I could make gnudi and gnocchi from improvised and non-traditional ingredients.

And inspiring for me! Although just from having seen your improvisational skills on COTM I would have guessed you’d find a surprising new way with gnudi/gnocchi.

I’ve wanted to make gnudi for a long time. But I’ve been busy, and a little scared. I figured having this DOTM would help push me, and it did! Reading articshark’s review made it sound doable, and I took her sauce tip to heart. I used the same recipe she links to, bus served with a (sorry folks, bottled) tomato sauce. I would have preferred a thinner, lighter sauce, but the family thought it was a perfect mix.

These were easy! Sooooo easy. I refrigerated them after cutting, having read elsewhere that this would help them stick together. Seems to have worked. Nice pillowy dumplings. Lulu said she’s made them at cooking camp with spinach, and that the addition makes them tend to fall apart. Has anyone else had this experience? I served with salad and baguette, and it was a pretty classic meal. 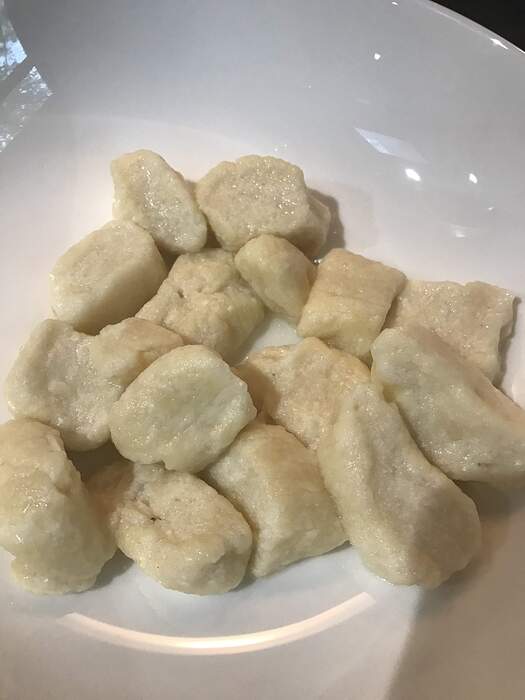 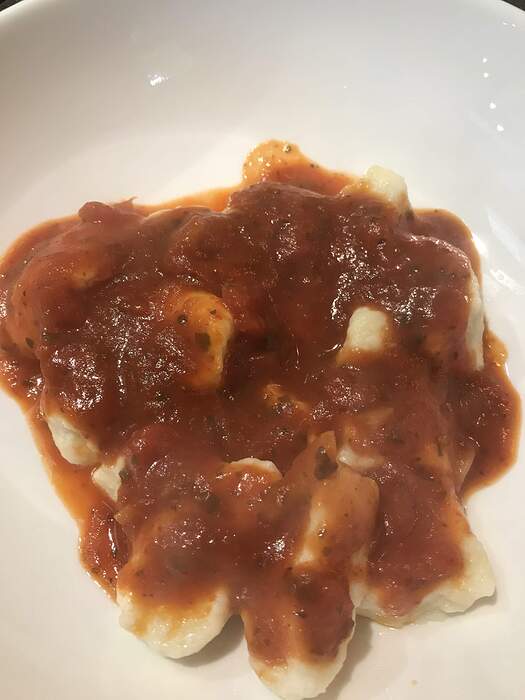 Quick extra thought: I felt like these could have used some salt. Next time I’ll add it.

i’ve made these and they are incredibly simple. with so few ingredients you really need excellent ricotta – mass-produced supermarket will not be at all as amazing.

these are also much easier to make than potato gnocchi.

these parisian gnocchi are sublime. it’s basically choux pastry, formed, chilled and poached, then baked off with cheese and sauce. they are light as a feather. 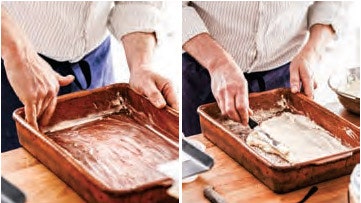 Gnocchis à la Parisienne This dish is considered humble fare, and one you would never see in a restaurant. Hence it's largely unknown to folks outside of France. Paule Caillat gave me her family recipe, to which I made a few changes (authorized, of...

Today Alexandra Cooks has a recipe for Easy Homemade Ricotta Gnocchi along with some sauces. https://alexandracooks.com/2022/04/24/easy-homemade-ricotta-gnocchi/?ck_subscriber_id=875283115

The recipe is online here (sorry if it is behind a paywall for you): 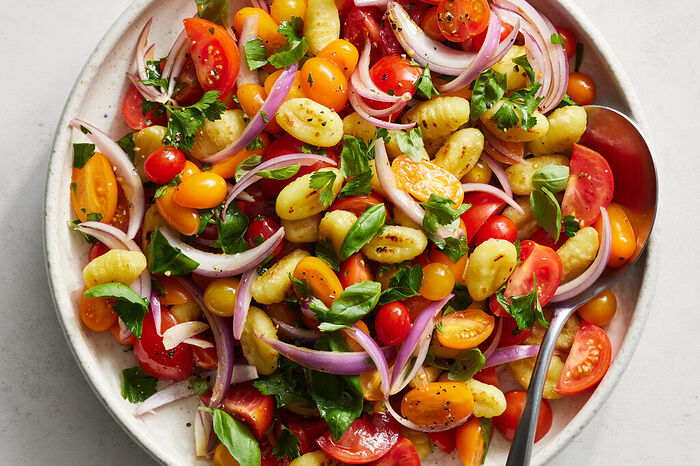 Inspired by panzanella, the beloved Tuscan bread salad, this dish swaps out stale bread for pan-fried gnocchi The plump, crusty dumplings do a surprisingly good job at soaking up the summery combination of tomatoes, balsamic vinegar and olive oil,...

I ignored the advice to use store-bought, shelf-stable gnocchi, and made my own. Same recipe I learned from the cooking class mentioned above, but once again adapted by me to be gluten-free. I wanted to try a different flour mix this time, and settled on a blend of 2 parts brown rice flour, 2 parts sweet rice flour, and 1 part potato starch. No xanthan gum or psyllium husk used, just the flours. I used this mix 1:1 by weight for the wheat flour in the recipe, and it was perfect. I also did not have any vegan parmesan on hand, so I used a local cashew cheese that is aged and fermented, finely grating it with a microplane. This cheese had some fennel in it, and it lent a very subtle fennel flavor to the gnocchi, which was welcome. I had no issue with the gnocchi wanting to fall apart during frying, as the recipe warns. This was a nice, lighter way to have gnocchi in the summer, and I would happily repeat.

Nominations for the upcoming quarter are open! Summer 2022 (Jul-Sept) Dish of the Quarter - NOMINATIONS 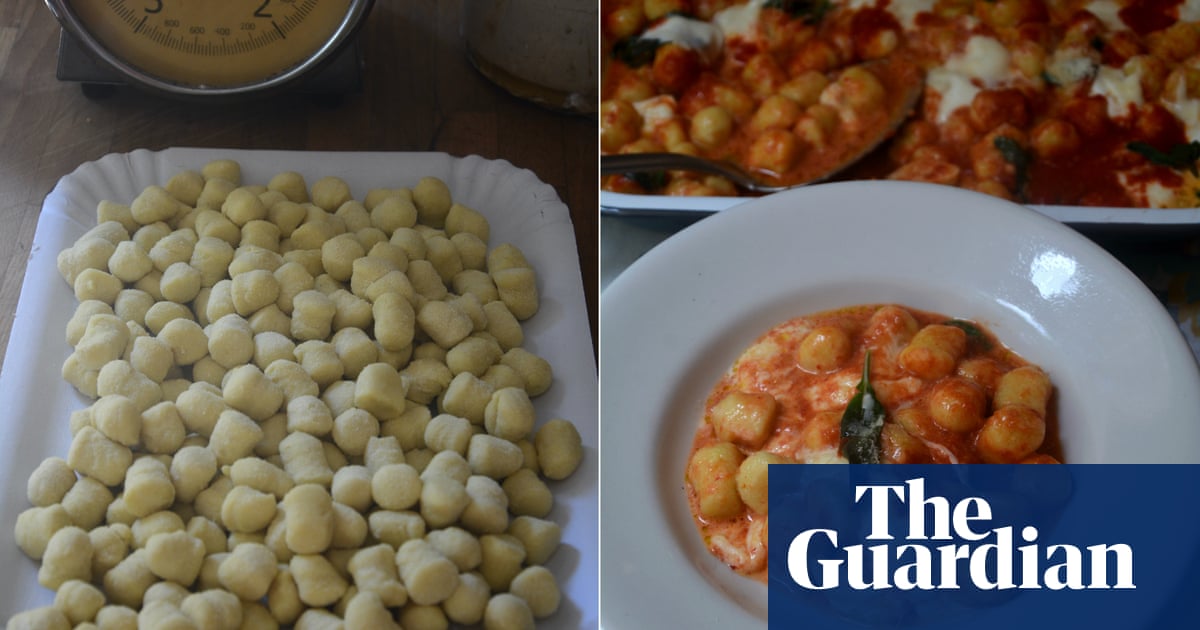