Fuku Hazlet- Sushi: a cut above

Have been to Fuku three times now. We always sit at the bar with Chef Mike who is well trained and well versed in gourmet sushi preparations and presentations. The other sushi Chef with him is Chef Dave who owned Osho for many years who is an extremely accomplished sushi chef in his own right.

We let Mike make us omakase each time we’ve been there. The first two times were actually really really good with excellent fish/sauce combinations with beautiful plating. The prices were fair for the quality of food served. No this is not Yumi’s assortment of fish and sauces, but it’s like half the price of Yumi, (which is better than ever btw).

The other night dinner started out the way the first two did…excellent cool combinations, especially a fresh potato chopped pasta like topped with uni and ponzu sauce which was outrageously good. Dinner was good until Mike served us this combo sushi/sashimi plate- all four sushi fish, tuna, salmon, yellowtail and shrimp were overly cold and basically tasteless. There were a couple of unidentifiable fish on the plate served sashimi style. The final dish was a tuna tataki salad with yuzu which again (this is where Mike is great) was terrific because of the sauce. The problem we had with this dish was the price- he charged us $65 for this plate which in our opinion was a total money grab.

Fuku is an unassuming restaurant in a little strip mall right past Costco going west on Hwy 35. The sushi served is definitely a cut above most places- they have an extensive menu of both cooked food and sushi rolls. The biggest problem I see is that because of limited business, the fish choices are very limited (except probably on the weekend when they say they are very busy). I highly recommend giving Fuku a try, but stay away from the pure sushi and sashimi.

Sorry, that plate alone was $65. The rest of the food was reasonably priced.

That is some fucked up nonsense.

Was that 65 plate toro? That could explain the cost. That stuff is like 8 dollars per bite lol

The biggest problem I see is that because of limited business, the fish choices are very limited

It’s a general problem with most sushi places in Jersey.

Which is surprising since we have so many places in NYC that serve sushi with exquisite fish at elevated prices, so it’s not like it’s not available.

As long as people in jersey go for the specialty rolls, and not the fish it self, the problem will persevere.

As noted elsewhere, a number of these rolls could be called “everything but”, because they are only lacking a deep basin kitchen sink. 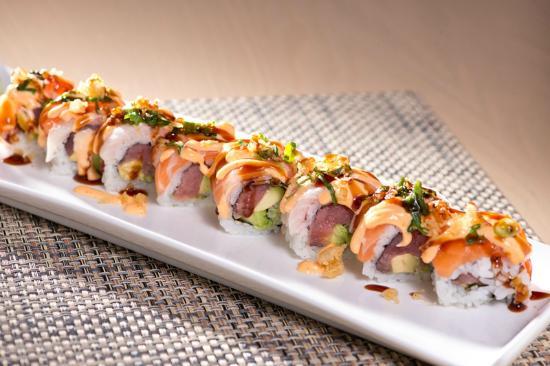 Or the “Trainwreck” cause that’s what it ends up looking like. 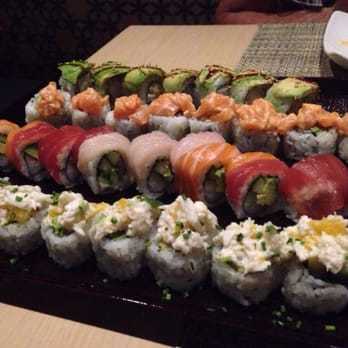 To quote some of the appropriate maxim’s here:

You win half billion powerball, what restaurant do you buy? (NJ Edition)

At the shore, we have the restaurants we deserve.

The problem is not the owner or the chef, it’s the customer.

Before your quick delete. You said that many of the sushi chefs in a certain area are Fukienese. Therefore, justifying your racist picture of the stereotypical asian as a sushi chef was what you meant. I see.

Before your quick delete. You said that many of the sushi chefs in a certain area are Fukienese. Therefore, justifying your racist picture of the stereotypical asian as a sushi chef was what you meant. I see.

Yeesh. Lighten up fool. Go watch Mr Magoo and report back. I’m guessing you don’t even know the characters.

Also if if you think I’m a racist for saying that Jersey sushi is made by Fujianese who have never been to Japan and don’t have a clue about what real sushi is, then guilty as charged.

Most of the sushi in this state is just awful.

So speaking of international insults, here are a few items from the Fuku menu for you.

A sashimi appetizer that looks like the 21st annual Gwangzhou flower show. 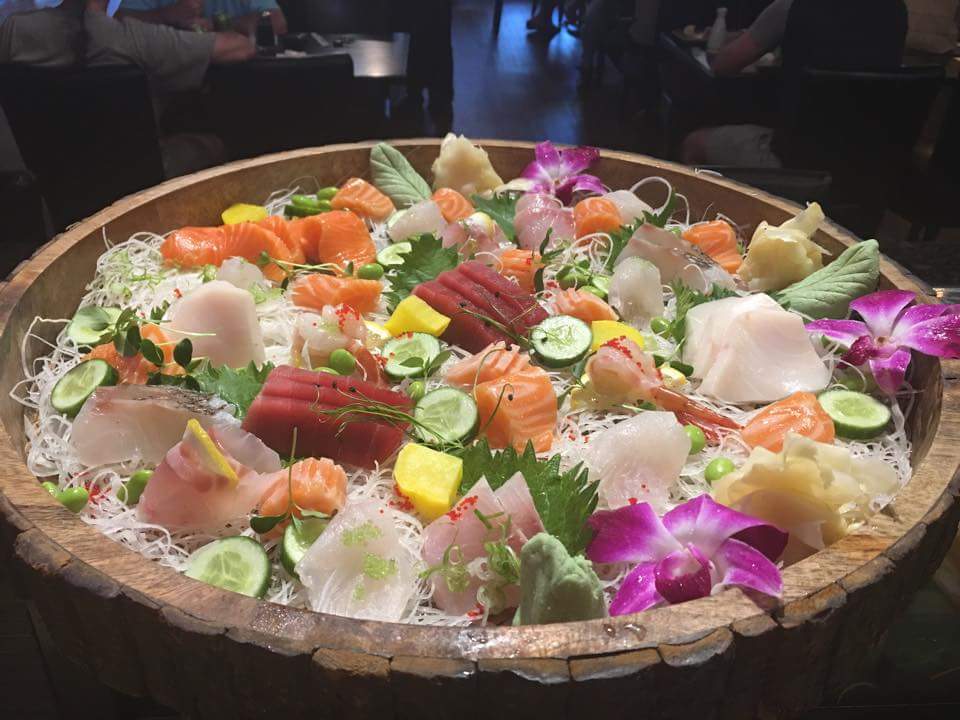 Or maybe the welcoming bouquet from a high class Shanghai brothel.

It’s sure not Ikebana.

A “trainwreck” roll consisting of a gone off Siracha mayo tuna salad center topped with a canned (!) crab salad and garnished with mystery eel sauce. 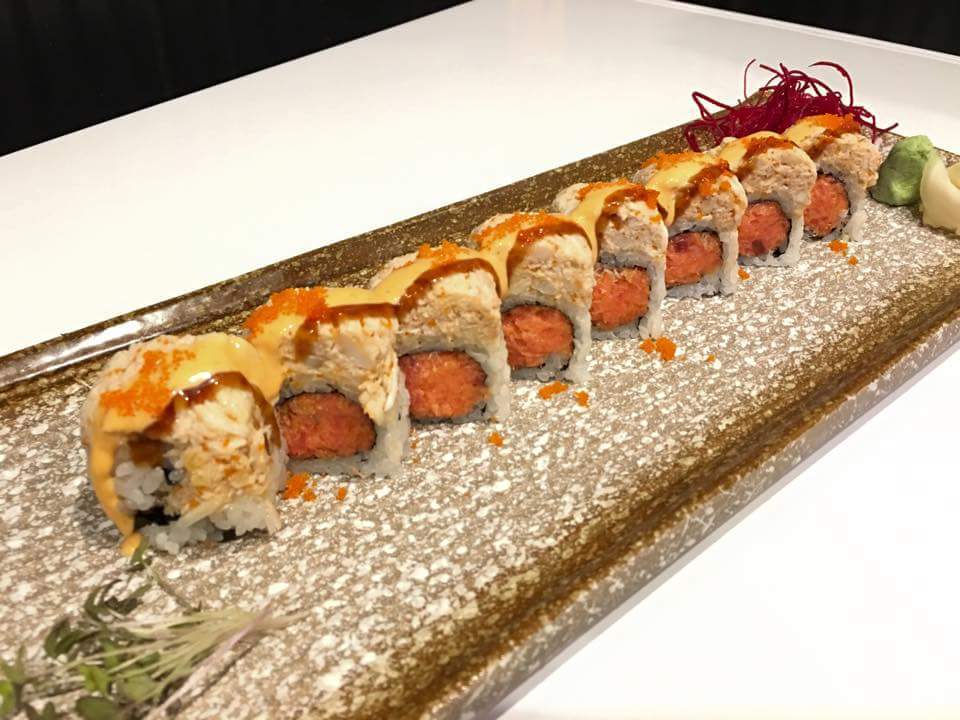 The “mystery” in the eel sauce is that there is no eel in it, and it is never served with unagi in Japan.

So how it came to called “eel” sauce is a real mystery.

In closing, all I can say is that this looks more like something the fish already ate, rather than eating fish.

Then there is my personal favorite, the flaming scallop on a Chinese brazier, such a Kyoto riyuri classic:

This leaves me speechless, but then it kind of speaks for itself as it does have audio.

Why you would do something like that to a perfectly good scallop is another mystery, one for the ages. 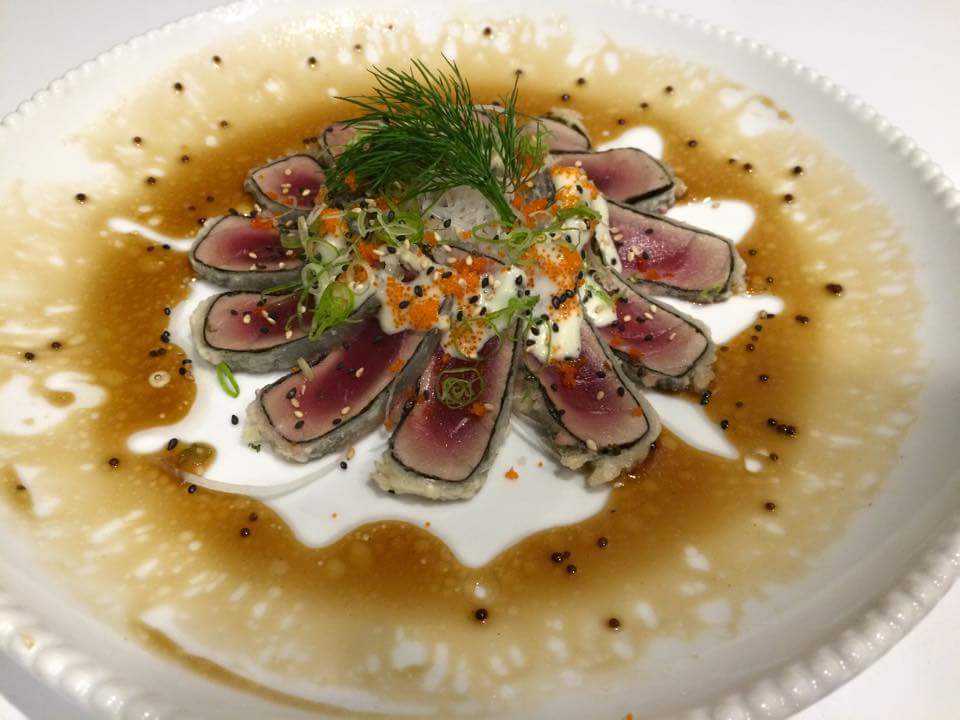 The famous “great volcano” appetizer, named for what it will do to your colon an hour after you eat it. 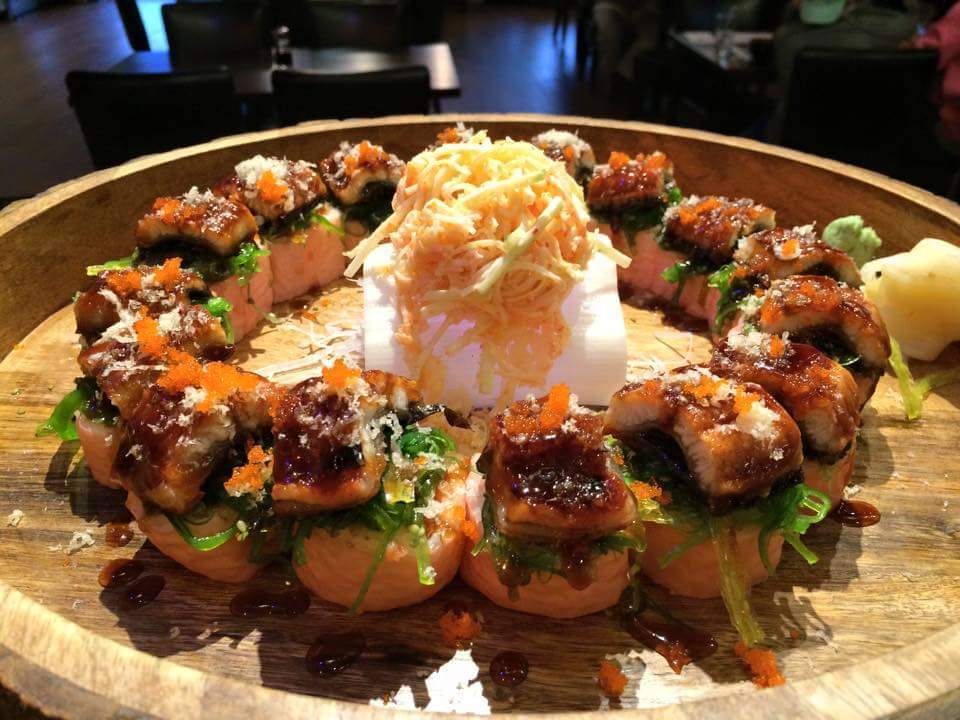 So, without further add, their sushi “burrito”: 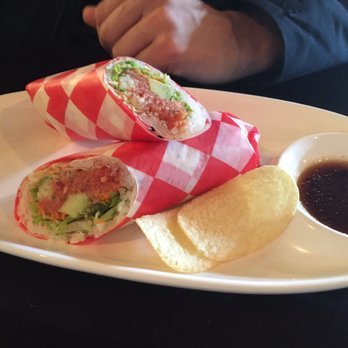 The pringles on the plate give it that authentic Japanese touch, wouldn’t you agree?

Some more classic Ryokan kaiseki items from the Fucku menu: 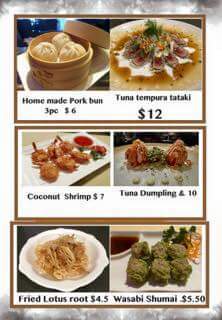 You said that many of the sushi chefs in a certain area are Fukienese. Therefore, justifying your racist picture of the stereotypical asian as a sushi chef was what you meant. I see. 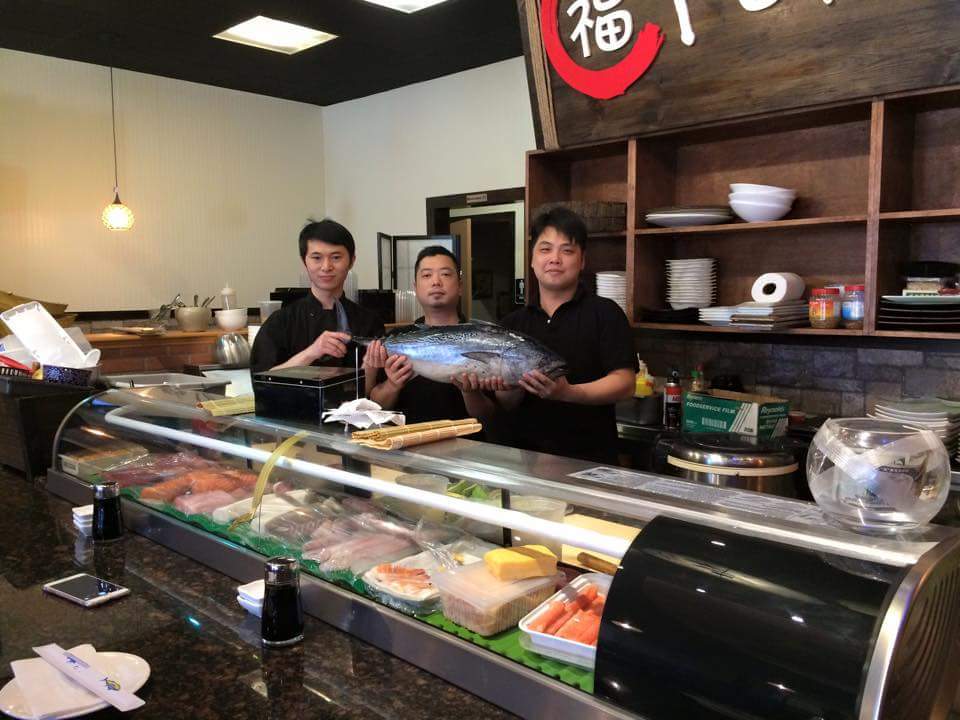 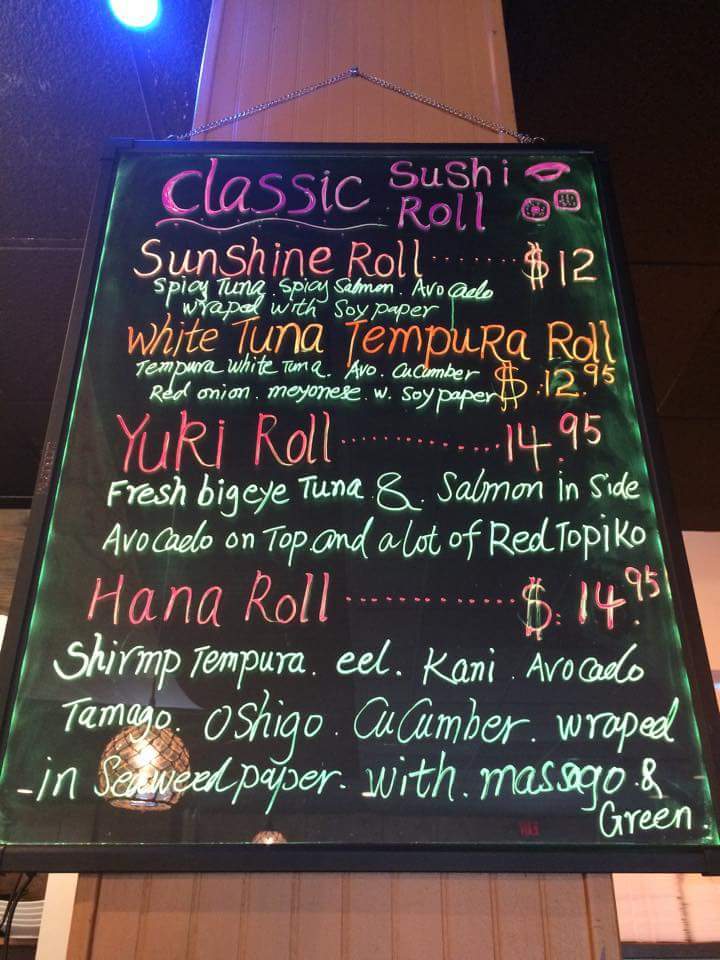 Their word, not mine, check the board.

By the way the “White Tuna” on the classic rolls board above, also known as escolar, gives you diarrhea.

The escolar, Lepidocybium flavobrunneum, a species of fish in the family Gempylidae, is found in deep (200–885 metres (656–2,904 ft)) tropical and temperate waters around the world. It is also known as snake mackerel, walu walu (Hawaiian, also seen written waloo), and is sometimes fraudulently sold as "butterfish" or "white tuna", a matter aggravated by potential health problems related to consumption of escolar. The escolar is dark brown, growing darker with age until it is quite black. It i...

It is one of the things that really piss me off about these Jersey Sushi places run by Fujianese.

They are actually serving you fish that makes you sick.

Those mille crepe cakes with such thick crepes look like bootleg versions of Lady M’s. For the record, Lady M’s versions are delicious.

Just north of Costco on Route 35 in Hazlet.

We look forward to your review.

That is some fucked up nonsense.

I could not agree more as regards the plate and this whole thread.