Fire Extinguisher and what to bring?

There was this half-joke from Chowhound. The first and most important item for a kitchen is a fire extinguisher. Two questions

Yes, I have one on a counter by the stove. First five other things (assuming dishes and flatware, a stocked pantry, and all the appliances)…Big chef knife, big cutting board, medium saucepan, big CS skillet, and big mixing bowl. If I can carry them in a jelly roll pan, I’m set.

Yes. We have several fire extinguishers throughout the house but I am married to a fire department battalion chief.

I should answer too.

No fire extinguisher. Not even a smoke detector, though I need to buy one asap as they have become mandatory here in the Netherlands.

I bought a new gas stove last year, a Smeg Opera. When I first started frying some chops, the pan caught fire due to the high gas output. Think flambeeing. Luckily I didn’t flinch, but I wasn’t expecting that. It still happens quite often.

Yes, I have a fire extinguisher in my kitchen.

5 things I’d bring to a new kitchen(I haven’t moved in decades…)? A knife, a cutting board, a frypan, a large sauce pot, and a corkscrew

I’ve used our fire extinguishers twice. The first time was when I heard yelling in the backyard and discovered that the kid mowing our lawn had tried to pour gasoline into a hot lawn mower and set it and part of the lawn on fire.

The second was when I put a papad in the toaster oven, turned my back on it to do something, and forgot about it until it burst into flame.

(We have one in the kitchen and one in the bedroom at the other end of the house.)

I never thought as a fire extinguisher as a house-warming gift but it’s actually a very good and rather fun idea. Thanks, Evelyn !

I have a fire extinguisher in the cabinet closest to the stove. I’m glad you asked about this, though, because I haven’t replaced it since we moved into this house, 20 years ago, so I’m sure it’s no longer within its use life. It’s on my list now.

I’ve only had a couple of pan fires that didn’t self-extinguish quickly, and luckily both times I had the lid on the counter right next to me so they were easy to kill.

Given we haven’t moved in 20 years, I’ll list the 5 things I always take when we’re renting a vacation home, and like Tim said assuming flatware etc. already available. 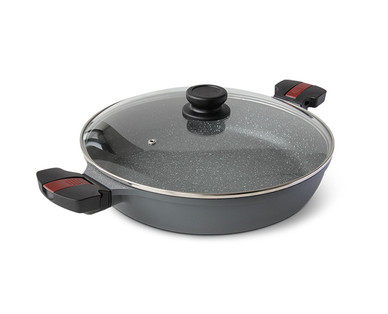 Yes, I have one on a counter by the stove.

move it away from the stove. if you have a fire on the stove, you’ll want to be finding the extinguisher someplace other than in the fire…

We have one, but it’s probably old enough to need replacing. We’ve never needed to use it though. I do have a GIANT box of baking soda in case I ever do have a flame issue. Baking soda worked wonders when my sister accidentally lit some Pop Tarts on fire in a cheap toaster, right next to some wicker place mats that were stacked precariously on the microwave right next to it. That definitely got the adrenaline going that day.

When I moved the last two times, we moved everything all at once. But, I do recall when I moved into my first apartment that I brought the following - a starter block of Henkel knives, a large stainless steel mixing bowl, a cutting board, a saute pan, and a pasta pot.

Yeah. It is slightly counter intuitive, but it is a good idea to keep the fire extinguisher very close but not exactly where the most likely needed fire occurrence locations.

It is actually on a counter perpendicular to the one where the stove is situated and the counters, rather than intersecting, are separated by the door to the garage on one wall and the pantry door on the other. So it is easily reachable from the stove but in a safe place. We also have the usual smoke alarms, CO alarms, and other fire extinguishers throughout the house.

Your experience of rental places speak to my heart. Even high end rental places usually can only offer serrated knives and glass cutting board

to keep a fire extinguisher

I don’t own one, how often do you need to renew one?

Some say every 1-2 years but I don’t do it that route. I think as long as the gauge indicates it has pressure, then it is good. Of course, there is balance too. At some points, it will need a closer inspection. These days small fire extinguishers are very affordable